A large chunk of the $369 billion to be spent for “energy security and climate change,” as part of the Inflation Reduction Act, is allocated towards electric vehicle (EV) subsidies.

The subsidies provide a $7,500 tax credit at the point of sale for a new EV. The idea, of course, is that it will act as an incentive for us all to transition to EVs and CO2 emissions will be reduced.

As we’ve reviewed before, if the majority of our electricity is produced by fossil fuels – as it is, almost everywhere on the planet – carbon emissions won’t be reduced by shifting to EVs. Some have even argued that emissions will increase, as typically 7–15% of electricity is lost in transmission from the power plant to the end user. That’s just the nature of the inefficiency of the distribution of power over our current infrastructure.

But let’s set those inconvenient truths aside for a moment. Is it even possible for the automotive industry to produce enough new EVs to hit the targets set aside for 2030? I recognize that it’s a moot point, given the nature of how electricity is produced, but the exercise will reveal something quite interesting.

It is possible to produce enough of the new vehicles, the cars themselves, but – and this is a big but – it won’t be possible to manufacture enough EV batteries to “fuel” them. The fundamental problem is with the EV battery supply chains.

And at the very beginning of the supply chains are the metals that need to be mined and extracted from the earth, and ultimately processed for use. It’s a destructive and very dirty process that leaves massive “scars” on Earth’s surface – and produces immense amounts of carbon emissions. And yet without these metals, we don’t have EV batteries…

The problem is that with these massive targets for EV production set by countries around the world, the politicians and policymakers (especially those in the U.S.) didn’t think much about the details of whether or not the targets were possible. Or for that matter, whether or not the process would be “clean” and actually result in lower emissions.

The automotive industry is already struggling with shortages of these metals, as well as with securing future supply, yet the policy targets established within require more than a 5X increase in kilotons (kt) in lithium production, 2X in nickel, and almost double in cobalt.

Making matters worse, on average it takes 7–10 years to get permitted to build a mine in the U.S. And that’s right… in just eight years it will be 2030. How’s that going to work?

Some other countries, particularly in developing markets, are able to permit in shorter periods of time, but it is still a multi-year process. Further, what about the practicalities of the “where” and “how” to extract and process these metals? 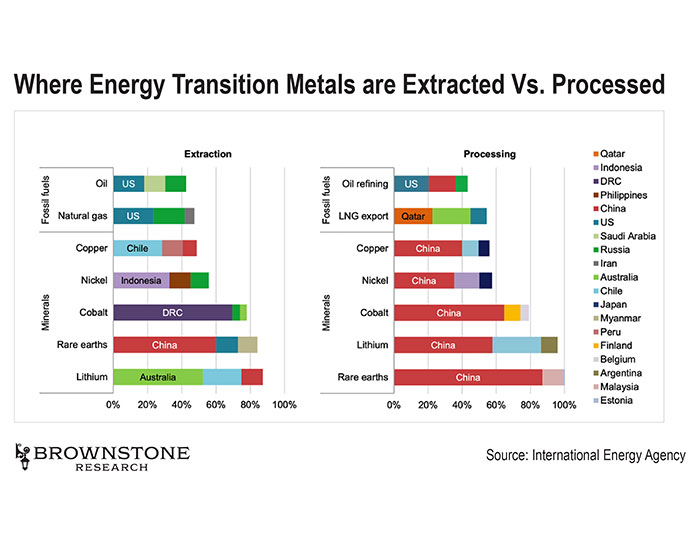 Cobalt is almost entirely mined in the Democratic Republic of the Congo, not exactly an anti-fragile location for a key material in a supply chain.  More than half of nickel production comes from Indonesia, the Philippines, and Russia.

The majority of the rare earth metals are all mined in China… critical metals used not just in EVs, but most forms of advanced electronics like our smartphones.

And the majority of the world’s lithium is mined in Australia and Chile. While these locations are politically stable, it’s the required step up in production – more than 5X – that’s the problem.

But even if we assume that somehow the permitting of new mines magically happens within the next two years, and the metals can be found at the scale that is necessary to meet demand, there is one more sticky problem…

And now, the implications of those decisions are being felt across supply chains. These metals are not only important in the context of battery production, but in many cases, are considered to be matters of national security.

The reality is that China has a chokehold over these metals and can control how much of each are exported to the world. And of course, its own country’s needs will be prioritized over others.

It’s great to have aspirational goals and objectives with regard to clean energy. My sincere wish is that we transition the entire power production infrastructure to clean energy produced from technology like nuclear fusion.

Sadly, these tax and spend stimulus packages have no chance of achieving their targets. “They” neglected the most basic and fundamental inputs required to meet stated targets.

Even worse, all of this spending will enrich a small number of vested interests, very wealthy individuals, and politicians… at the expense of normal taxpayers.

DeepMind is leaping into applied biology and getting its hands “wet”…

We had a look just last week at DeepMind’s greatest accomplishment yet.

As a reminder, DeepMind is Google’s artificial intelligence (AI) division. And the big news last week was that it published the protein structures of more than 200 million proteins – basically an open-source catalog of every known protein on Earth.

Well, DeepMind is taking this research one step further.

DeepMind just announced a partnership with the Francis Crick Institute in London. The two will establish a wet lab together. The goal is to explore protein design and genomics in even greater detail.

Specifically, DeepMind plans to test its protein predictions in a lab setting. Then it will synthesize those results with its AI.

The goal, of course, will be to further improve the accuracy of the predictive abilities of the AI. The end result will be the world’s premier AI for drug discovery and development. And ironically, DeepMind is not a biotechnology company.

So I’m very excited about this venture… But it is something of a surprise.

After all, DeepMind is purely software driven. The team at DeepMind is arguably the most talented AI team on the planet. But they have never worked in a biology lab before.

So this is the first time that DeepMind will cross over into hands-on laboratory work. And I don’t think this is a coincidence.

We have talked before about how the first AI-discovered therapies are now entering human clinical trials. Right now, just a few companies are advancing AI-based therapies like this, but many more will follow.

That makes it important to synthesize AI-based research with real-world experimentation in the lab. It will result in better therapies and even faster development times.

And given that DeepMind has been sharing its breakthroughs in biology with the world by open sourcing its technology, we have no reason to believe that it won’t do the same with its forthcoming discoveries… And that means that the entire biotech industry will benefit from whatever new discoveries and improvements DeepMind makes.

The most advanced conversational AI yet…

Regular readers may remember how Meta released a large language model back in June. That put advanced AI into the hands of anybody who wanted it.

The result is a chatbot that is nearly indistinguishable from a human. This demo tells the story: 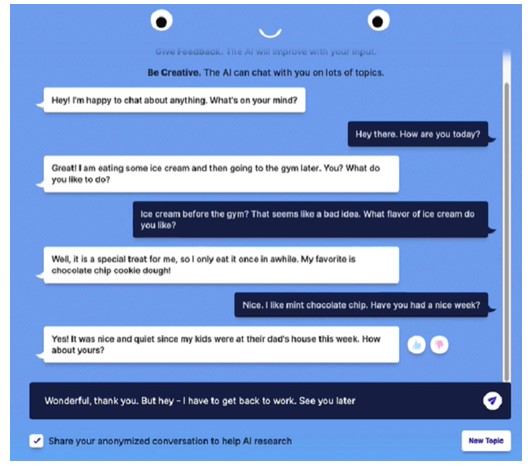 I asked my team to experiment with BlenderBot 3. This shows a real conversation one of them had with the AI.

What’s incredible is the humanlike nature of the responses. The conversation is so smooth and natural. We wouldn’t suspect we were talking to an AI if we didn’t know already.

So I believe BlenderBot 3 is the base of what will eventually become Meta’s personal digital assistant.

Clearly, the conversational piece is ready for primetime. The only thing that’s left is for Meta to train the AI to do specific tasks, like setting appointments and ordering groceries… tasks that will be immediately valuable to normal consumers.

At that point, Meta will have a product that will gain rapid adoption – especially if Meta offers the digital assistant for free.

Of course, the trade-off there is privacy. If it’s free, the digital assistant will constantly collect data and send it back to Meta.

That said, mass-market consumers have already demonstrated that they prefer convenience to privacy. So I don’t think this will be a serious obstacle.

Either way, this is an exciting development in the AI space. And I’m sure it will prompt both OpenAI and Google to respond in kind.

In fact, Meta explicitly stated that BlenderBot 3 is more specific 76% of the time compared to OpenAI’s GPT-3… So the race is on for conversational AI right now.

And looking forward, a mass-market digital assistant is the ultimate goal. The tech is getting close, and I have been predicting that at least one major player will launch an AI before the end of this year.

The FCC walked back on its promise to Starlink…

We’ll wrap up today with an interesting development around Starlink.

This is a difficult problem to solve. Installing fiber-optic internet is incredibly expensive… especially if the fiber needs to run out to very rural areas.

For this reason, the Federal Communications Commission (FCC) budgeted $9.2 billion to provide subsidies to companies willing to deliver internet connectivity to underserved areas. These subsidies were meant to be an incentive for companies to tackle the problem.

And Starlink’s approach is a great solution.

The connectivity isn’t quite as good as fiber. But it is on par with average cable internet in terms of speed and latency. Plus, Starlink can provide coverage for far cheaper than the cost of installing fiber.

So the FCC awarded Starlink over $885 million in subsidies back in December 2020. And as we know, Starlink went right to work on solving the problem.

Fast-forward to today, and Starlink is providing satellite internet coverage to hundreds of thousands of customers. Most of them are in rural areas. In other words, Starlink solved the problem… and in fact, is the only new entrant to have actually done so.

Yet the FCC just walked back on the $885 million in subsidies. It denied Starlink the promised funds.
I find this very odd.

We’ve talked quite a bit in these pages about how often Starlink is conducting satellite launches. Obviously, it’s not cheap to get satellites up into orbit and then configured. The company has poured a ton of capital into this project.

That makes no sense. Starlink’s tech is real… And it works.

Starlink already has around 500,000 subscribers, all based in remote locations using the service, and more than half of which are in the U.S.

Why is the FCC talking as though this is an idea that hasn’t been implemented yet?

I can only conclude that this is somewhat political. Starlink did exactly what the FCC wanted done… but suddenly the rules changed.

Perhaps this is pushback due to how outspoken SpaceX CEO Elon Musk has been on freedom of speech and censorship. Or perhaps the FCC sees that SpaceX is valued at $125 billion and thinks it doesn’t need the money.

Whatever the case, this sets a very bad precedent.

If government agencies can suddenly retract agreed-upon incentives, at what point will companies stop responding to those incentives?