Before we get to our insights today, for anyone who has not seen my Day One Summit, today is the last opportunity to do so. It will come down tonight at midnight ET. This is the event where I revealed my first-ever private investment research product – Day One Investor.

And I’m happy to say that the response has been fantastic. I released my first private investment to charter subscribers last week, and over $37 million worth of investments have already poured into the project.

It is hard to express how excited I am. Aside from the incredible nature of the opportunity, Day One investors are literally funding and enabling what will become a fantastic business. This is a company that we are truly investing in at day one. This is the ground floor. The investment returns from here are going to be astounding.

Given the nature of these private investments, though, we will be closing access to Day One Investor when the replay goes down tonight. Some of the private deals we will invest in are just too small to accommodate a large number of people.

For any readers who are on the fence about diving into the world of private investments, I encourage you to check out the replay of our Day One Summit today, before it is no longer available.

I know of no better way to build generational wealth than with private investments, and I’ve never been more excited about what I’m seeing in the private markets. And remember, the deals we invest in are open to all investors. There are no accreditation requirements.

So please take advantage of this opportunity to become a charter member of Day One Investor. My commitment is to bring at least 50 incredible private investments to you over the next five years.

Everything I recommend will have the potential to at least return 10 times our money. And some of these companies will do far better than that. It’s going to be a fun ride.

For those interested in learning more, just go right here.

The Digital Currency Group (DCG) just raised a whopping $700 million in an investment round led by SoftBank. This is the second-largest capital raise ever in the blockchain industry. And it values the DCG at $10 billion. That’s decacorn status.

What’s interesting here, however, is that DCG is not a venture capital (VC) firm. Instead, it’s positioning itself as the first blockchain/cryptocurrency conglomerate.

If we look at the DCG’s holdings, it’s basically a holding company of anything and everything that’s happening in the blockchain industry. The company has made investments in just about every nook and cranny of the blockchain and cryptocurrency space.

And the DCG has been a stalwart in the industry over the years. The company is led by Barry Silbert, a big proponent of Bitcoin from the very beginning. He’s always been willing to be way out in front of the curve, investing in new blockchain developments years before they begin to gain momentum.

As such, the DCG would be an amazing company to invest in for the long haul. But it has shown no interest in going public or opening its doors to smaller private investors.

Still, this is a great company to watch. If we pay attention to where the DCG is allocating capital, we can identify the most prominent blockchain projects that are likely to be a big deal in the next three to four years.

And with $700 million in dry powder from this recent raise, we can be sure that Silbert and the DCG team will be busy making big investments in the coming months. I absolutely expect the burgeoning metaverse trend to be a big investment focus going forward.

For those who are interested in this space, this is always an interesting company to watch.

And for readers who are interested in making the same kind of bleeding-edge investments in the crypto space, please check out the replay of our Day One Summit. The hottest private metaverse investment on the market today is not something to miss out on…

This is an investment that could easily be 20X over the next 12–24 months. And I absolutely think it could return more than 100 times an original investment over time.

And here’s the best part – it’s open to all retail investors. Everyone can invest with just a few clicks of the button.

For those interested, just go right here to access the replay. But please do so before midnight tonight. After that, the doors will close and we will not be taking any new members.

Meta, the company formerly known as Facebook, just made an interesting announcement about artificial intelligence (AI).

Meta AI Labs partnered with Carnegie Mellon to develop something called ReSkin. It’s a synthetic skin that allows robots to touch and feel similar to humans.

ReSkin is primarily used for robotic hands. It’s a soft plastic material with sensors built-in. These sensors collect all the tactile data produced when a robotic hand touches, grips, or manipulates an object. That data is then fed back to an AI model to teach robots how to handle objects with just the right amount of pressure. 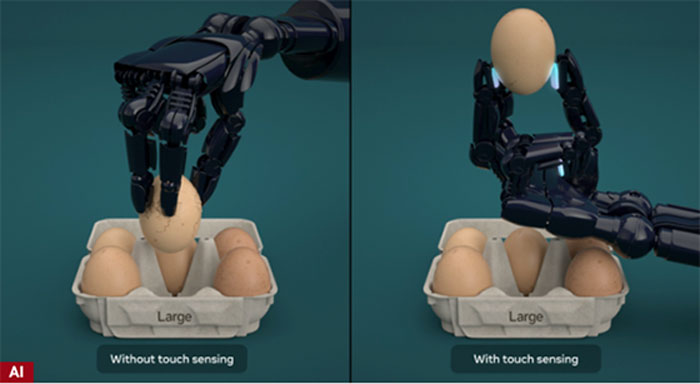 As we can see, this tech is critical when it comes to teaching robots how to deal with delicate items like eggs or fruit. ReSkin opens the door to robotics being deployed in industries where goods need to be handled carefully.

What’s more, this technology can teach robots how to interact with humans. It could enable a robot to walk up and shake our hand, just as a human would. And the handshake would feel natural. The robot would exert just the right amount of force.

When I think about those applications, I immediately think about health care shortages in aging societies like Japan. It’s not a stretch to think that robots outfitted with ReSkin could serve as home health aides in places where the need for support is outpacing the availability of human labor.

And what’s exciting here is that this technology is cheap to manufacture. Meta claims that 100 units can be built for $6 or less. And each unit is durable for up to 50,000 interactions. And once the ReSkin and its sensors reach the limit of their lifespan, they will be cheap and easy to replace.

This combination of cost and longevity means that ReSkin has all the makings of a technology that will be adopted quickly for certain robotic applications.

We’ll wrap up today with what I suspect will be a controversial topic. Fair warning: this bleeding-edge tech may be uncomfortable to think about…

A company called Conception just raised a $20 million venture capital round. And while the name is very descriptive of the company’s purpose, it isn’t in the way that we might think.

The backers are a couple of tech-heavyweights. The former president of Y Combinator and current OpenAI CEO Sam Altman, as well as Skype co-founder Jaan Tallinn, were two major backers.

The work this company is doing is straight out of a science-fiction novel. Conception is developing technology that takes a human white blood cell and converts it into a pluripotent stem cell. This is a cell capable of turning into any other kind of cell.

That stem cell is then turned into artificial eggs whose genetic makeup comes from the person who provided the original blood cell. If this technique is proven to be successful, it will be a way to produce human embryos, and ultimately, children that are biologically related to their parents… entirely in a laboratory.

The most immediate application is to allow women who aren’t able to naturally conceive a child to still have biologically related children. This could also allow women in their 50s and 60s to be able to easily have biological children, irrespective of their age.

This could give hope to many couples who want children but are unable to conceive. There are however other implications here…

For one, this technology makes it possible for a man to have children without a woman’s egg. The technology could literally be used to produce an egg from one person’s blood cells. It could also allow more than two people to contribute their blood cells to the eggs’ genetic material.

That means children could potentially have DNA from any number of different people rather than just a mother and father. And, of course, this opens the door to the “designer babies” debate once again.

This tech could allow someone to produce a large number of eggs – say 1,000 – and then screen each embryo to determine which one is genetically the strongest.

Some will argue that this is absolutely wrong on all levels. Meanwhile, others will say that this would allow parents to filter out embryos with genes that make them susceptible to debilitating diseases – either in childhood or as they age.

Proponents might argue that this is an ethical thing to do because it spares the child and the parents from going through a painful experience.

To be very clear, the team at Conception has not yet proven that this approach will work. But they are going to try. And knowing Silicon Valley, I suspect that there is even more capital waiting in the wings to fund the effort if there is even the smallest amount of progress at Conception.

This is going to be a massive moral and ethical debate in the coming years.

It is admittedly a difficult and uncomfortable topic. And it is also closely linked with the developments related to genetic editing technology. After all, genetic editing allows us to mend, repair, and even improve our DNA after we are born.

But utilizing these kinds of techniques at the time of conception becomes a far more sensitive subject. Broadly speaking, the genetic editing industry has drawn a line at germline editing. The general principle is that no editing should be performed on an embryo. The ramifications are simply too severe and of course, the unborn child would have no say in the matter.

This is a deeply personal topic to me as I have a special needs child that I wouldn’t give up for anything in the world. So my goal is only to share what is happening on the bleeding edge in Silicon Valley. I’d rather us be aware of these developments than be ignorant of them.

So we should be prepared for a major ethical debate around this topic. This is going to make a lot of us uncomfortable, but we can’t deny that it is happening.

One other interesting dynamic about Conception is that the backers do not have a background in life sciences, biochemistry, or anything related to biotechnology. They aren’t life scientists. They are technologists. And they are absolutely thinking outside the box on this issue.

I’ll be keeping an eye on developments around this kind of technology. It has implications not only for humans but also for livestock.

Genetically optimized cows, pigs, and poultry could be selected and bred to improve food yields and quality. It’s going to raise all kinds of complex issues around the ethical use of technology.

And it has tremendous implications for the future of humankind.