One of the things that’s “on the ballot” today in the U.S., and in other countries around the world, is freedom of speech.

While it may not show up on a line item on our voting ballot – and we might not be able to darken a circle “for” or “against” freedom of speech – it’s become an impassioned issue for many.

And for some, it’s become the single issue.

It’s understandable, after all. No child or adult likes to be told to “shut up.” Even worse is being banned from ever sharing your thoughts or expertise ever again. Yet that’s exactly what happened over the last couple of years.

Accomplished scientists from around the world were told to “shut up” and were banned from sharing their scientific research and analysis on the world’s digital town halls – on platforms like Facebook and Twitter.

And that’s what makes the latest developments at Twitter so interesting.

We’ve been closely tracking Elon Musk’s $44 billion acquisition of Twitter, which was completed on Thursday, October 27. He’s owned the asset for less than a fortnight yet has already implemented some incredible changes in that short period of time.

Agree with those decisions or not… he’s been busy.

Musk immediately gutted Twitter’s C-suite the day after the deal closed, which was a smart move by all accounts. After all, those were the executives who were supposed to improve the performance of the company and act in the best interests of shareholders. And in short, they weren’t.

Within 48 hours, critics were melting down, many of whom were threatening to leave the platform. But Musk didn’t stop there…

He was quick to implement a new business model for blue-check authentication – all at a simple and affordable $8 a month. Pretty fair considering that’s about the price of a nice cappuccino in a major metropolitan area these days.

But this move upset the Twitteratti with their prized blue checks. After all, at $8 a month, nearly everyone can afford to get a blue check. And that makes those who already have them feel less special.

And yet, the truth got worse: 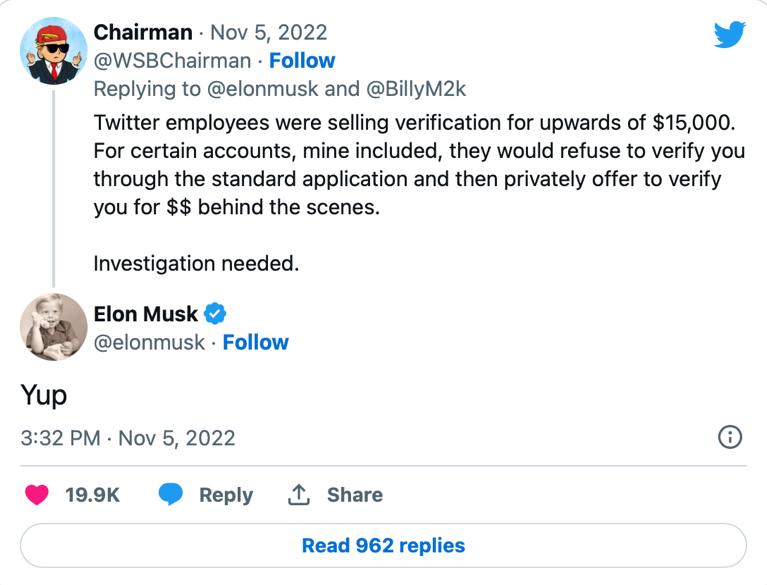 One of Twitter’s dirty secrets was revealed pretty quickly. It’s been charging some users as much as $15,000 in order for them to get verified for a blue check.

Clearly, that price point is out of reach for almost every user on the platform. Sadly, it was common practice prior to Musk taking over.

While there definitely should be an investigation, at least now that particular problem has been solved. And not without Musk’s trademark sense of humor: 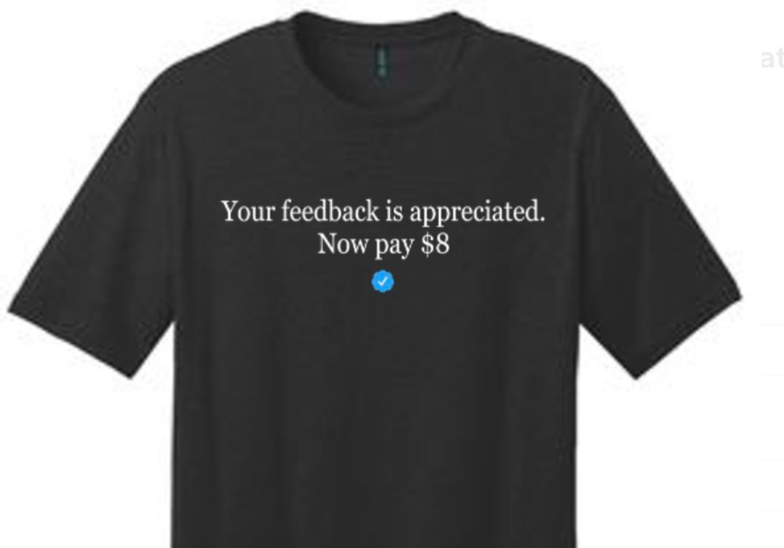 I have to say, the current vibe on Twitter is the best I’ve ever seen.

Scientists are now being permitted to speak and share their findings. Users are able to share their thoughts and opinions. And high-profile figures are being politely corrected irrespective of their political affiliation.

Below is a perfect example of that:

Rather than stating that the above comment was “wrong,” Twitter’s fact-checkers gave some important context on the difference between the “most common gas price” and the “average gas price.”

It’s noteworthy because the “most common gas price” isn’t the average, as it diminishes the data from states that have the highest gas prices.

This statistical sleight of hand reminds me of the difference between the Consumer Price Index (CPI) and the Core CPI, which strips out the effects of inflation in food and energy.

One would argue the skyrocketing prices of food and energy are kind of important, though. They count, just as the real price of gas does…

Regardless, seemingly overnight, there’s far more balance than bias on Twitter, where all opinions and thoughts are welcome. To most, that feels good.

But at least half of Twitter’s former employees may disagree. After all, about half the company was let go last Friday. And it goes without saying that, outside of bankruptcy, a workforce halving like this is highly unusual.

It’s a bold move made by Musk to test his thesis that Twitter has become a bloated, bureaucratic mess – resulting in most positions being entirely superfluous. Some might already agree with him. But in the months that follow, we’ll find out if Musk was right.

Meanwhile, a number of activist groups have pressured advertisers to pause their advertising spend as a way to protest the newfound “balance” at Twitter. This has resulted in a short-term revenue slump for the company.

But despite the naysayers and critics who tend to get all the press, something odd has happened since Musk took over Twitter:

Something remarkable is happening in an incredibly short period of time. And the best part is that there are more positive developments to come. I suspect this will be one of the fastest turnarounds of all time.

And if there’s one thing I’m sure of, it’s that as Twitter’s daily active user stats continue to grow and Musk cleans up the bots on the platform, advertisers will come running back to spend in order to gain access to Twitter’s massive consumer market.

There is no “but” after saying “I believe in free speech.” It’s a constitutional right in the U.S., and a key tenant of any free and democratic society.

Which reminds me… It’s Election Day, so please don’t forget to vote.

Ripple Labs is beating the SEC…

It’s been a while since we checked in on the ongoing legal battle between Ripple Labs and the Securities and Exchange Commission (SEC). It’s more interesting than ever, and it’s become a rallying cry for the industry.

As a reminder, the SEC went after Ripple back during the 2020 holiday season. It claimed Ripple engaged in an unregistered securities offering with its cryptocurrency XRP.

The SEC’s lawsuit seemed unusual, as Ripple was early and proactive about ensuring its regulatory compliance and has been working with the world’s financial institutions – and even central banks – for years.

In fact, Ripple’s technology had already been proven as one of the most useful applications of blockchain technology.

Over 300 financial institutions in over 40 countries have adopted Ripple’s money-transfer technology. That’s because XRP transactions settle in three to five seconds. And they cost as little as a fraction of a penny. They’re perfect for cross-border settlement.

And it’s not just Coinbase. A total of 12 entities in the blockchain industry have pledged support to Ripple Labs in its defense. So what started as the SEC trying to pick on Ripple has effectively become an industry fight.

And that’s because the industry knows that if the SEC prevails, nearly every digital asset out there would be considered an unregistered security. And that would be absolutely devastating for the entire industry.

It certainly appears that Ripple is winning this fight. Its legal argument is that the U.S. constitution prohibits government agencies from condemning the conduct of an enterprise without first providing notice to the company that the conduct was, in fact, illegal.

And get this: The SEC’s internal documents and emails show that the agency didn’t see the XRP issuance as a securities offering at first. So not only did the SEC not inform Ripple years ago that it believed it had done something illegal… it stated that it wasn’t in its own communications.

This is a landmark case for the entire industry. And the results will directly impact the blockchain industry, its U.S.-based innovation, and whether investments will thrive in the U.S. or continue to move offshore.

I believe we’ll see the legal battle reach a conclusion in the first half of next year. And it sure looks to me like Ripple is going to win. Rightfully so.

When that happens, it will be a positive catalyst for the entire industry.

Another promising approach to quantum computing…

The quantum computing industry has been a bit quiet over the last six months or so. We know that there’s an intense level of investment and research and development happening, but the industry’s been short on major announcements.

I knew it wouldn’t last…

A start-up called ColdQuanta just raised $110 million in its Series B round. That’s a massive jump from the $32 million it raised in the Series A back in November 2020.

I’ve been tracking ColdQuanta for a few years now. But I hadn’t gotten too excited about it because it hadn’t raised enough capital to “go big” and bring its approach to quantum computing to life.

But any time we see a major up-round like this, we know the company has something big going on behind the scenes. Clearly, ColdQuanta has had a breakthrough recently. That’s the only way it would be able to pull in nine figures in a bad economic climate like we have today.

What’s unique about ColdQuanta is that it’s pioneering the cold atom approach to quantum computing. This entails cooling a single atom down to a few millionths of a degree above absolute zero. That allows the atom to take on quantum properties, which can then be leveraged in a quantum computer.

This has always been a promising approach to quantum from the theoretical perspective. But now we know it has legs. That’s why some heavy hitters are stepping up to back ColdQuanta.

In fact, the Defense Advanced Research Project Agency (DARPA), NASA, and In-Q-Tel – the venture arm of the CIA – are each supporting ColdQuanta now. They’ve each clearly seen a technology with great promise and can see quantum applications for their respective divisions of government.

ColdQuanta’s underlying goal is to build a 1,000 qubit quantum computer within three years of the most recent funding. Presuming it’s successful, it would be transformative for the industry.

And it’s also working on quantum sensors that could potentially transform the performance of communications networks. Presuming it can do so, ColdQuanta could become not just one of the major quantum computing players in the industry, but also a major player in communications technology.

A turning point in the industry of humanoid robots…

Regular readers know we’ve been tracking the development of bipedal humanoid robots for years. We were very early to the trend. Now it seems the investment banks are following suit… which is a sign in itself.

Just a few days ago, Goldman Sachs published a new research report on humanoid robots. This is the very first research on the topic to come out of Wall Street.

And as we would expect, Goldman is quite bullish on these humanoid robots. It believes it’s a trend that will grow at 94% a year over the next decade.

Goldman thinks that humanoid robots will close 4% of the U.S. manufacturing labor shortage gap over the next seven years or so. And it thinks humanoid robots can fill 2% of global elderly care demand by 2035.

These projections may sound small on a percentage basis… but they represent material adoption before this decade is out.

What’s more, Goldman predicts that humanoid robots could become a $154 billion market by 2035. That would make it roughly the size of the global electric vehicle (EV) market.

I’ve shared my belief that humanoid robots will be a mass-market product as their prices comes down to an affordable level.

That’s very exciting. We’ve suffered through two years of distinct labor shortages – especially in manufacturing and healthcare. Robots could certainly help fill some of the void.

And from my perspective, the big catalyst in this industry was when Tesla announced its Optimus robot. That’s what signaled that humanoid robots represent a massive commercialization opportunity.

Watching how far Tesla came with its tech development in just a matter of months made it easy for others to recognize what will quickly become possible as early as next year.

In fact, next year is going to be a remarkable time in this industry. And the breakthroughs won’t just come from Tesla.