“The Next Warren Buffett?” asked Fortune on the cover of its August / September 2022 issue.

Sam Bankman-Fried on the Cover of Fortune 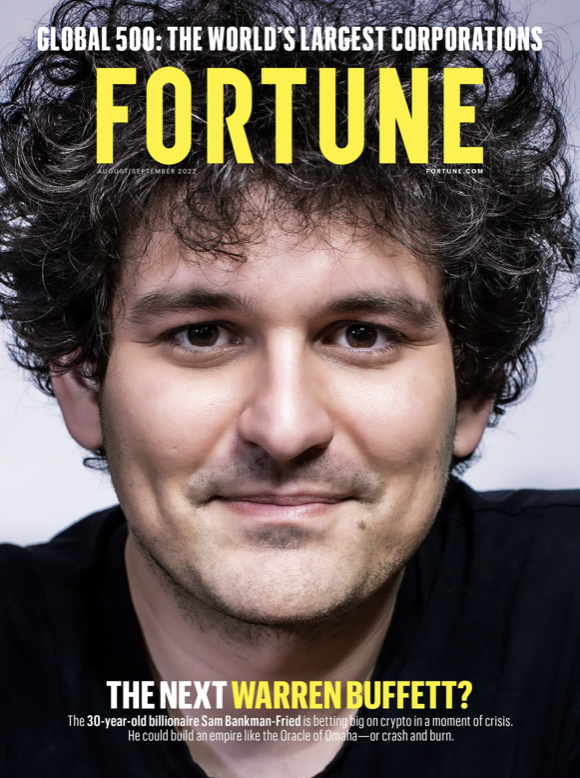 It’s ironic how magazine covers so often portend a massive reversal in fate. This time was no exception.

Sam Bankman-Fried, known as SBF, came out of MIT with an undergraduate degree in physics before quickly gravitating toward quantitative trading.

He launched cryptocurrency trading firm Alameda Research in 2017 and found there were a large number of arbitrage opportunities in digital assets to take advantage of.

That worked for a couple of years, until all the-low hanging fruit disappeared. SBF needed more capital to work with, so he founded FTX.

And almost overnight, it quickly became one of the largest cryptocurrency exchanges in the world.

FTX’s rise was surprising, and everyone wanted in…

Fast-forward to this January when FTX raised its Series C funding round, taking in $500 million at a $35 billion post-money valuation. Imagine that: Going from founding a company to a $35 billion valuation in less than three years.

SBF became a multi-billionaire overnight. A few weeks ago, he was reportedly worth $15.2 billion. And many big names invested in FTX, including:

And so many others. These are very sophisticated institutional investors… Meaning it must have been an incredible investment opportunity, right?! Surely, it checked all the right boxes in terms of due diligence.

But was it real? Apparently not.

As I mentioned previously, Alameda Research – which SBF owned 90% of – eventually ran out of easy arbitrage opportunities. Luckily, the firm was also market making to keep revenue going. But what nobody seemed to realize is that Alameda was using leverage to make even more gains.

The concerns centered around the low-quality cryptocurrencies that Alameda was holding, which were declining in value during the current crypto winter. Alameda also held a multibillion-dollar position in Solana, a cryptocurrency that fell from $170 at the start of the year to just $30 last Friday.

While the tokens were down big, what really raised concerns was the fact that Alameda used this asset as collateral in order to use leverage in the market. And that raised questions regarding Alameda’s solvency.

The trigger for that solvency question – which led to what we’re seeing in the crypto market today – began with FTX’s “printed” currency, FTT.

The FTT token is a way for the exchange to “share” profits to token holders. It does this by taking a portion of token holders’ revenue, purchasing FTT, and then destroying them.

This reduces the supply of the token, creating scarcity for the remaining supply. The token is also held by users who can then enjoy reduced trading fees.

The kicker was that the largest holdings of Alameda were in FTT, the cryptocurrency “printed” by FTX. SBF was lending the currency that he created at FTX to his trading entity Alameda, which was then going out and borrowing against those assets.

That was never going to end well, and the charade has since been exposed.

After the CoinDesk article came out, the founder of Binance – which held a large position in FTT as a result of an early investment made in FTX – figured out that something was very wrong. He made it public that he’d sell his remaining position of FTT in the open markets.

And what happened next was nothing short of a classic run on a bank. 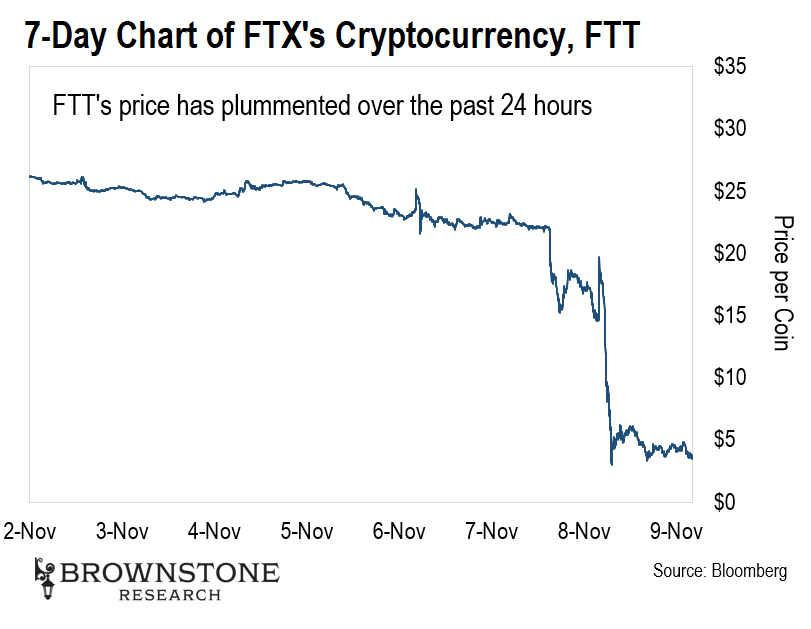 Binance has since made an offer to take over FTX for $1, but the offer doesn’t mean much at the moment as due diligence still needs to take place.

But the rumors are already swirling that the liabilities are far greater than anyone thought – in the billions – and that could easily result in Binance walking away from the deal.

Binance is the largest crypto exchange in the world, and FTX was No. 3 before all this hapspened. There will certainly be antitrust issues to contend with, and it will take weeks – if not months – to unwind the mess that SBF created.

We also don’t yet know all the counterparties on the other side of Alameda’s borrowing. Some of them will be in trouble as well.

For a while, SBF was seen as an industry leader – and even supported other players that had fallen into trouble, like Voyager Digital and BlockFi. He even stepped in to take a 7.6% stake in fintech exchange Robinhood when it was struggling through the current bear market.

Fortune pontificated that: “SBF’s dominance has sparked comparisons to JPMorgan and other plutocrats who scooped up assets during earlier eras of turbulence in American finance.”

But it was all a house of cards. SBF used Alameda to front run trades on FTX and managed to bamboozle others to lend to Alameda based on its cryptocurrency holdings – not to mention invest at a $35 billion valuation to fund FTX and all of these shenanigans.

But unlike many other black swan events, many smart investors, trade desks, and industry players didn’t see this one coming. And it begs the question: How did Fortune and all those sophisticated institutional investors get it so wrong?

We certainly shouldn’t feel bad for them. They had access to a lot more information than we would ever have. They were insiders, after all. And yet they still chose to invest.

Athletes Tom Brady and Stephen Curry even got suckered into the game as well. I doubt they’ll have to worry about what they’ll eat for breakfast, but they’ll certainly lose almost everything they put into FTX.

And SBF? Well, he’s no longer a billionaire. His net worth appears to have dropped to around $991 million.

It pays to diversify, which he clearly did over the last few years. And while he may still have more money than he could ever use, his net worth will certainly drop further… and I doubt this will end well for him.

One thing’s for sure: SBF definitely isn’t the next Oracle of Omaha.

Back in May, we had a look at a major development at Google with its Google Translate applications.

At the time, Google Translate’s artificial intelligence (AI) could directly translate 133 different languages into one another. And there were no other large language models capable of performing such a task.

What made the announcement so interesting was that, historically, translation between two languages would often require a two-step process. A language had to first be translated into English, then into the desired language. And of course, that risks things getting lost in translation.

That makes it the largest language model available today, and a massive upgrade from what it released earlier this year. It just surpassed Meta’s language model, which can handle over 200 languages.

And Google isn’t done. The company released plans to support the top 1,000 most widely spoken languages. This is absolutely extraordinary.

Beyond the most common languages spoken, the usage of certain languages and dialects drops off quickly. Many are spoken by less than a million people, which means that they don’t usually get much attention.

The preservation of these languages has been a grand challenge.

And I have to say, having this kind of universal speech and translate model will serve the common good. It will break down all barriers to speech and communication. And it will make the internet – and all the world’s information – available in every native language.

Of course, Google does have a vested interest here. By making the internet and its platforms like YouTube available in a larger number of languages, it will increase usage of Google’s products. And that will ultimately result in even greater advertising revenue for the company.

Regardless, initiatives like these will ultimately bring the remainder of the world’s population to the internet. They will also preserve many languages that would have otherwise likely diminished or disappeared in usage over time.

Project Guardian took place in Singapore in cooperation with the country’s central bank. It involved converting 100,000 Singapore dollars into a “tokenized” Yen product. This is a blockchain-based digital asset.

Then they transferred this digital asset to Japan using the Polygon blockchain and a modified version of Aave’s DeFi protocol.

The idea is that this approach makes cross-border transactions far more efficient. The transaction fees are miniscule. And they can settle almost instantly.

What’s unique here is that this is the first time a major bank has used a public blockchain and an open protocol. That makes this transaction fully transparent. Anyone can verify that it occurred.

The legacy banks have been experimenting with digital assets prior to this. But they have always used their own closed systems. That prevents the public from being able to verify digital asset transactions.

To me, this certainly appears to be a precursor of what’s to come in the U.S.

We know JPMorgan has been testing its own digital asset, JPM Coin, as well. What’s interesting here is that, if we look into the technical details of this transaction, we can see the token is called JPM SGD. 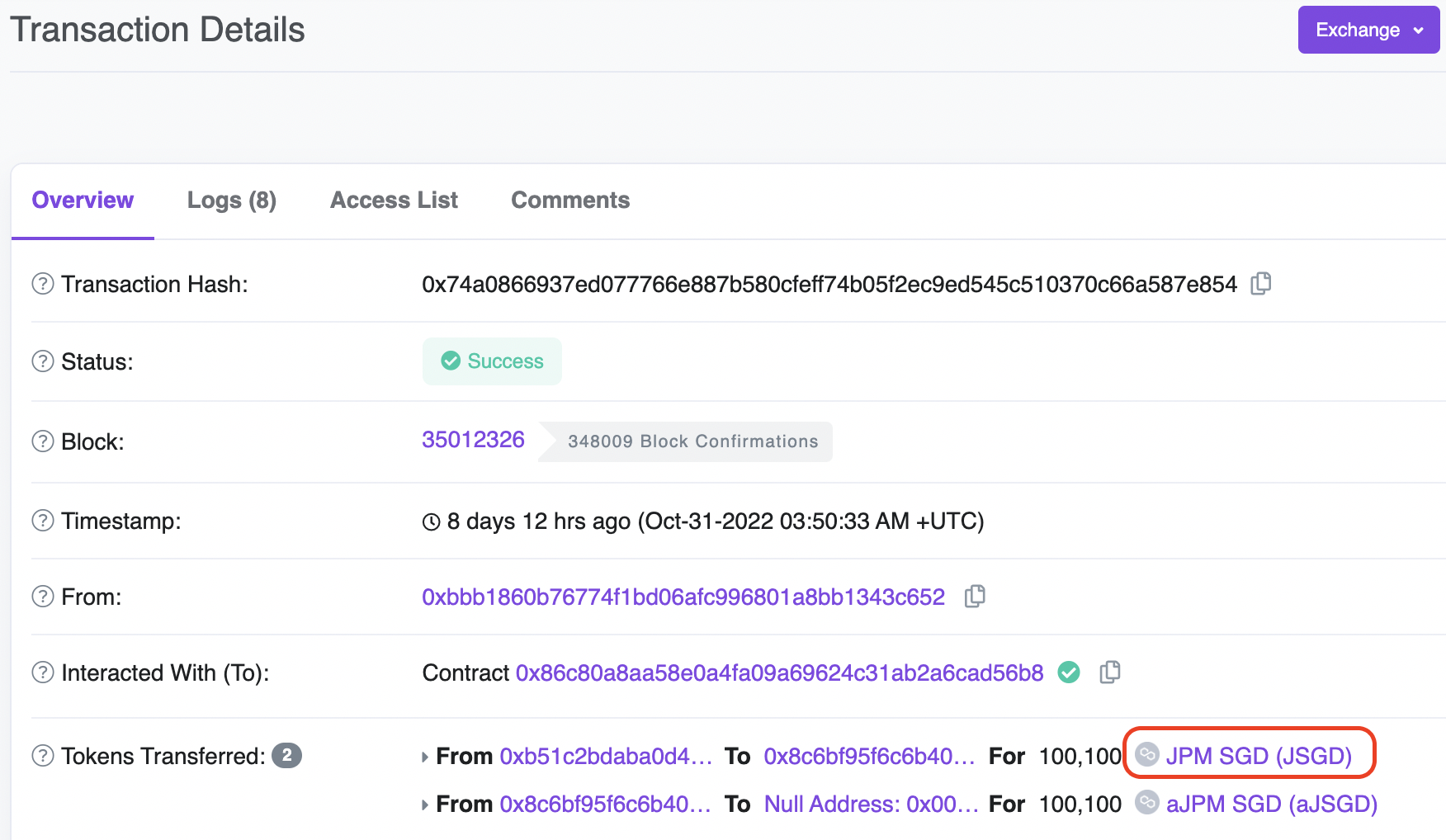 And if we recall what’s happening with JPM Coin, it’s a digital representation of dollars held at the bank. That means, in this instance, we’re seeing a Singapore version of a JPM Coin.

Given the revolving door between JPMorgan, the U.S. Treasury, and the Federal Reserve, I have to ask: Is it possible this is the same tech that a U.S. central bank digital currency (CBDC) would stem from?

It’s certainly possible. And I suspect that we’re going to find out more within the next six months.

An application for drones that we may not expect…

As regular readers know, we’ve been tracking developments in drone technology over the last couple of years in The Bleeding Edge. But mostly for delivery or inspection applications. The technology has already begun to find adoption for these purposes.

But Candy Crush just did something completely different. It used drones for advertising across the New York skyline. Here’s a look:

500 Drones Fly Over the Manhattan Skyline

Here we can see 500 drones perfectly positioned in the New York sky. And they each light up at just the perfect time to advertise Candy Crush in a clever way.

I suspect many readers are familiar with the game. Its app often comes pre-installed on new smartphones. And it’s very simplistic. There’s nothing complicated about it.

That said, the company received a lot of backlash from its drone antics.

A lot of people were upset that these drones interfered with their view of the New York skyline. And some were concerned they’d have a negative impact on the environment and migratory birds.

I got a chuckle out of the company’s response.

Candy Crush basically said that it worked hard to get permission from the Federal Aviation Administration (FAA). And it pointed out that the drones compare favorably to fireworks. There’s no smoke, no emissions, no waste, and no noise.

So the company’s position is that it’s OK to “pollute” the skyline with drone advertisements every now and then. I’m sure many will take exception to that.

Regardless, I think the genie is out of the bottle here.

As Candy Crush demonstrated, it’s relatively easy to pop up a few hundred drones to light up the sky with an ad. Other advertisers will want to follow suit.