I would like to invite all readers of The Bleeding Edge to join me for our Pre-IPO Code Event tonight at 8:00 p.m. ET. I promise it will be a presentation unlike any I have done before.

That’s because I am going to pull back the curtain on how we can break Wall Street’s stranglehold on the IPO market and get shares of companies before they go public – before the truly life-changing gains happen. This has been a long time coming.

The insiders have made out like bandits for over a decade by reserving shares in the hottest companies in the world for themselves. They milk all the gains they can while the company is private, and then they dump overvalued shares on an unsuspecting public market.

It’s borderline criminal. Except this is 100% legal.

That’s why I have spent countless hours looking for a way to break the insiders’ monopoly. And I’ve finally found it.

I have developed a new research service that will enable us to invest in some of the most exciting private companies in the world before their initial public offerings (IPOs).

And here’s the best part – investors don’t need to be accredited to use this service. There are no minimum investments required. And there are no crippling restrictions to contend with. We are talking about private investing made simple.

So please join me tonight. I’m going to reveal all the details around this strategy that we will use to acquire pre-IPO shares in the best tech and biotech companies in the world. This will be a brand-new tool in the Brownstone Research tool belt.

And I am excited to say that we will also be venturing into other high-growth sectors in this new service. That’s a first for us at Brownstone Research, but it is something I have planned to do for quite some time now.

Needless to say, I am very excited that I finally get to reveal what I have been working so hard on behind the scenes for the past 12 months.

So I encourage all of my readers to tune in for our Pre-IPO Code Event tonight at 8:00 p.m. ET. As always, my presentation will be free to all readers of The Bleeding Edge.

We talked back in October about how Ripple was getting some regulatory pushback here in the United States. For this reason, Ripple has been considering moving its business outside the country.

Well, over the holidays, the Securities and Exchange Commission (SEC) hit Ripple with a fierce sucker punch. It filed a lawsuit against the company claiming that Ripple, by issuing its XRP tokens, has been engaging in the sale of an unlicensed security.

This will be one of the most important lawsuits of the year for the blockchain industry.

To bring new readers up to speed, Ripple has been one of the biggest success stories in the blockchain industry. It has spearheaded what is arguably the largest commercial adoption of blockchain technology and digital currency on the planet.

That’s because Ripple’s technology is a perfect example of how much value blockchain technology can bring to real-world transactions.

XRP transactions can settle in three to five seconds. That’s almost instantaneous. And each transaction costs a fraction of a penny. This holds true for cross-border transactions as well. Users get fast, cheap settlements no matter what.

And that’s why more than 300 financial institutions in over 40 countries have adopted Ripple’s technology. These institutions are some of the top banks, central banks, and multinational corporations around the world.

These institutions largely use XRP as a bridge asset – effectively a bridge currency. It’s the perfect medium for converting one fiat currency into another.

Compare this to sending money across borders using the traditional wire system. Outgoing international wires cost up to $50 per transaction, and they take several days to settle.

And that may be the root of the problem…

Ripple has been one of the most buttoned-up companies in the blockchain space from a regulatory perspective. It has been in regular contact with both the SEC and the Commodity Futures Trading Commission (CFTC).

In fact, the CFTC has already determined from its perspective that XRP is a currency, not a security.

So why, after seven years of being in operation, is the SEC just now coming down on Ripple with a heavy hand?

My suspicion is that it all has to do with power.

Ripple’s technology has proven itself superior to the Society for Worldwide Interbank Financial Telecommunication (SWIFT) system. That’s the network through which most international money transfers settle. This is an international organization consisting of very powerful financial institutions.

Yet SWIFT uses antiquated technology that’s proven not to be secure. It also takes days for every transaction to settle. My gut tells me that this organization sees Ripple as a threat.

And now that the U.S. government is working on its own central bank digital currency (CBDC), it has an incentive to not let Ripple get too powerful.

I believe this is just about making sure Ripple doesn’t rock the boat too much. I suspect the SEC wants to extract a concession, and then it will settle with Ripple for a nominal fine.

As I write, XRP is down 59% from its previous high. That’s due both to these regulatory concerns and the fact that U.S.-based digital asset exchanges have suspended trading in XRP for the time being.

If I’m right about an upcoming settlement, XRP will likely rebound very quickly. This could be a great opportunity for a contrarian investor.

But this kind of heavy-handed action by the SEC is not good for the blockchain industry. It suppresses innovation domestically and pushes it offshore.

And this will reduce the number of potential investment opportunities that normal investors have in the digital asset space. This will exacerbate the situation that we have today, in which initial coin offerings are almost exclusively offered only to accredited investors in the U.S.

Ironically, Ripple is the most currency-like digital asset there is. Its primary use case is to help banks make cross-border transactions – it’s literally used to convert one currency to another and to send money across borders.

So if Ripple can be considered a security, then every other digital asset could be considered one as well. This kind of uncertainty is very bad for the industry.

So we’ll keep a close eye on Ripple’s case with the SEC this year. The first court hearing is scheduled for next month.

Over the holidays, Apple indicated that it plans to put a passenger vehicle on the road by 2024.

Of course, all the journalists immediately jumped to the conclusion that Apple will make its own cars. And they wondered how the tech giant’s approach to car making would work.

But as I mentioned last month, that’s not going to happen. Instead, Apple is going to follow Waymo’s approach and put its self-driving technology into other cars.

And sure enough, over the last few days, rumors have come out that Apple is in talks with Hyundai. This confirms my prediction.

However, a partnership with Hyundai doesn’t make sense to me.

Apple’s products throughout the years have always been sleek and refined. Apple excels at designing high-quality products with very strict tolerances that stand out from its competitors. For this reason, I think German carmakers BMW and Daimler would be far better partners for Apple’s Project Titan.

I can envision a sporty BMW or a refined Mercedes outfitted with self-driving tech and a new user interface. Apple would provide both the self-driving “operating system,” as well as a seamless user interface along the lines of what Apple does for all of its consumer products. I could see a collaboration like this as a strong alternative to Tesla.

Regardless of how it shakes out, this is an exciting development. And it’s coming fast…

2024 sounds like a long way off, but it’s really not. In the auto industry, carmakers must lock in their designs three years in advance. That means 2024 model cars must be designed in 2021.

For this reason, we can expect to hear a lot more about Project Titan later this year. We shouldn’t have to wait very long to learn about the company Apple will be partnering with.

So I’m very excited to see Project Titan ramp up. We can expect to get more details later this year.

We will wrap up today by checking back in on Blue Origin.

For the benefit of newer readers, Blue Origin is an aerospace company backed by Amazon CEO Jeff Bezos. The company’s goal is to put a lander on the Moon by 2024 and enable regularly scheduled commercial flights to space.

And it just hit a major milestone…

Over the holidays, NASA awarded Blue Origin with a NASA Launch Services II (NLS II) contract. This will allow Blue Origin to bid against other contractors for the launch of future space missions using its New Glenn rocket.

This is a beast of a rocket.

The New Glenn rocket spans 310 feet and sports a reusable booster. It’s massive. And that’s because it was designed to carry heavy payloads into space. 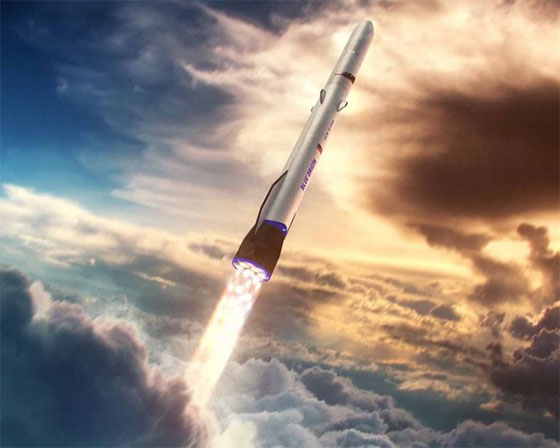 Blue Origin’s first launch is set to happen later this year. I can’t wait for that.

And with its NLS II contract secured, Blue Origin is now in direct competition for SpaceX when it comes to NASA launches.

And believe it or not, I put my name in to be on the waiting list. 2021 is shaping up to be a big year for the company.

P.S. Like I mentioned earlier, my Pre-IPO Code event is happening tonight at 8 p.m. ET. Go right here to make sure you don’t miss out on this new opportunity. I’ll see you at 8:00 p.m. sharp!