Biotechnology company Moderna announced that it had completed the enrollment of 30,000 participants in its randomized Phase 3 clinical trial for its COVID-19 vaccine. Like the Pfizer/BioNTech partnership, Moderna is also using messenger RNA (mRNA) as its approach to producing a vaccine.

Given the success that Pfizer/BioNTech have seen, this bodes well for Moderna. However, the Pfizer/BioNTech vaccine comes with a catch – it needs to be transported and maintained at -70 degrees Celsius in order to remain effective.

The challenge for Pfizer right now is figuring out how to transport the vaccine at such cold temperatures to medical facilities where the vaccine can be distributed. Hopefully, the Moderna vaccine won’t come with the same kind of challenge.

As for Moderna, almost as if on cue, the company announced that its first interim analysis will provide data points on more than 53 cases. That number was the trigger point for the analysis, a figure that Moderna clearly had already reached in October.

What I do like about Moderna’s trial is that it included more than 7,000 subjects older than 65 and more than 5,000 subjects under 65 with high-risk chronic diseases. These two cohorts basically define those who are at risk from severe illness or death from COVID-19. These people are too old or too unhealthy to have strong immune systems.

Not surprisingly, these cohorts are also at high risk of pneumonia, influenza, and other airborne viruses. That’s why this trial is so useful. This is the population that should be the first to receive a safe vaccine by choice.

As for the rest of us, we are at far more risk of severe illness from influenza than we are from COVID-19.

Given that the Biomedical Advanced Research and Development Authority (BARDA) – a division of the U.S. Department of Health and Human Services – has already committed $955 million in federal funding to Moderna, and the U.S. government has committed up to $1.525 billion to Moderna, I’m pretty confident that they have already seen the data too.

And I know we won’t be surprised to learn that the Food and Drug Administration (FDA) and the National Institutes of Health (NIH) were heavily involved in designing the Phase 3 clinical trial with Moderna.

I remain excited and confident that we’ll see positive results and approvals in November and December for vaccines and therapies that will be distributed in large quantities this year.

My disappointment is that the politically driven delays and suppression of information are causing unnecessary loss of life and livelihood through economic restrictions resulting in job losses.

Transparency is so critical at a time like this.

More evidence that the AI revolution is underway…

A few years ago, a small company called Scale AI caught my eye.

That’s because this company was tackling a difficult problem when it comes to training an artificial intelligence (AI). And that is the need for large, clean, and properly labeled data sets from which the AI can learn. After all, bad data will only result in poor outputs.

Scale AI got its start in 2016 by helping companies that wanted to use computer vision (CV) or image recognition technology. It produced and labeled very large data sets of tens of thousands or sometimes hundreds of thousands of images. Then Scale’s customers could simply turn their AIs loose on the data sets to help them get smarter.

At first, Scale AI only had basic automation processes in place to label these images. The company used AI to make that process more efficient, but it still required a lot of human intervention to correctly label the images that the AI couldn’t identify accurately.

At that time, Scale AI was worth a measly $15 million. Fast-forward three years to 2019, and this company was valued at $1 billion – a unicorn. And it had attracted the backing of some of Silicon Valley’s top venture capitalists (VCs). That’s all in a very short period of time.

Just a few days ago, I saw that Tiger Global Management is looking to invest in Scale AI at a $3.2 billion valuation. That means this company has tripled in value in a single year.

That’s an extraordinary valuation for a company that’s only four years old, especially given that Scale is only expected to generate about $80 million in revenue this year. That’s not much revenue for a company deemed to be worth $3 billion.

This tells us that Scale AI has made tremendous progress in automating its ability to create the structured data sets that companies need to train their AIs. It also tells us that the industry is hungry for the service that Scale AI provides. We can understand how quickly the AI industry is growing by how much demand there is for a company like Scale AI.

I like the approach that Scale is taking. We can think of it like a backend service, a horizontal play in the AI industry. It has taken on a difficult task that AI companies are not well-positioned to do themselves.

It reminds me of companies like Twilio for messaging and Okta for identity management. They enabled key functionality for any company, irrespective of their business.

We can also gain some insight into current valuations. At $3.2 billion, Scale AI has an enterprise value-to-sales valuation of around 37 for this year’s forecasted revenues.

That’s a lofty valuation, but it is in line with where some publicly traded, software-driven tech companies are valued as well. To me, this means that some of these seemingly high valuations in the public markets may indeed be sustainable as I look into 2021 based on the exponential growth we are seeing throughout the tech industry.

Of course, there are also some overvalued tech companies out there on the verge of falling as much as 92% in the coming months. I don’t want my readers to be surprised…

If you’d like to see my recent interview on the state of the market and a potential “splintering” I see taking place, go right here for all the details. In fact, in some sectors it has already started to happen…

As for Scale AI, this is definitely a company to watch. Let’s add it to our early stage watchlist.

Regular readers know that I’m not a fan of Google’s business practices.

The company always claims that it has noble intentions, but the reality is that its business is to harvest our data, package it, and sell it to the highest bidder.

And now Google has found a way to make its customers work for it without pay. 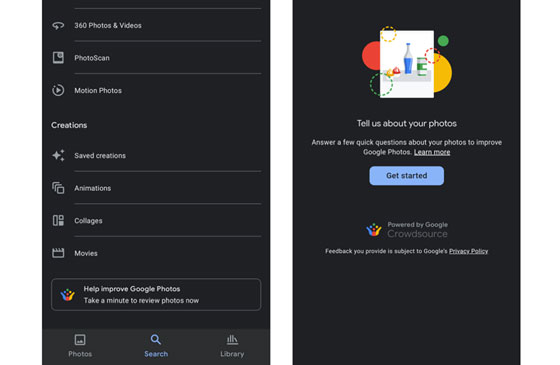 Google is now asking users of its Google Photos application to label and describe their photos. Why?

Google says it wants to better understand what’s important to you. It’s all to help “improve Google Photos.”

Of course, what Google is really doing is using these image labels to train its AI.

This is exactly what Scale AI started off doing… except Scale AI had to pay employees to get the work done for its clients. In this devious scheme, Google is getting consumers to do the work for free.

What’s more, this allows Google to harvest even more data on consumers.

When someone labels and describes their own photos, it gives Google an even deeper insight into that person’s life. That helps Google build an even better consumer profile, which it will turn right around and monetize.

Now, there’s nothing illegal about this practice. If people want to label their photos for Google, that’s completely voluntary.

But unless we want to work for free and share our personal information so Google will be able to sell more advertising, I think it’s better for us to pass on the opportunity to help Google out…

Another wild experiment from the International Space Station…

Last week, we talked about a form of bacteria that was sent up to the International Space Station (ISS) and then placed outside for a year.

We wouldn’t think that anything could survive physically in space for that long… but it did. The bacteria repaired its own DNA so that it could survive and thrive in harsh conditions.

More interesting research was just released about a different experiment with bacteria in low- or no-gravity conditions.

Scientists at the ISS have examined a single-cell bacterium that can extract nutrients, oxygen, and other minerals from rocks on Earth through chemical reactions. Conditions on Earth are conducive for this. In fact, about 20% of the world’s gold and copper is mined via these kinds of reactions.

But does it work in space? That’s what these scientists wanted to find out.

Sure enough, these bacteria demonstrated that they could extract oxygen and rare minerals in space as well. And that has exciting implications.

If we can take bacteria and “bio-mine” oxygen and important minerals in space, that will make permanent outposts on the Moon, Mars, and beyond much more feasible. It would no longer be necessary to send as much heavy mining and materials processing equipment into space.

And these bacteria could produce a continuous source of oxygen to support outposts in space. That alone is amazing.

We may also find that, in the case of rare metals, it actually might be much easier and less ecologically destructive to “bio-mine” in space and on other planets than here on Earth.