The Centers for Disease Control and Prevention (CDC) got it wrong… again. And it had to come clean.

There is a point at which the scientific evidence is so significant that the truth must finally be released.

This time, it was about the cleaning and disinfecting of surfaces (fomites) as a way to combat COVID-19. A year ago, public health “experts” instructed us to clean and disinfect all surfaces to “keep us safe.”

I remember seeing CNN’s chief medical correspondent Dr. Sanjay Gupta on TV instructing everyone to wipe down cans and boxes from the grocery store with disinfectants before use.

Because of him and so many other public health “experts,” some people were so scared that they wouldn’t handle a box that was delivered to their home until 48 hours had passed.

The problem was that they were all completely wrong.

On April 5, the CDC announced that SARS-CoV-2 (COVID-19) is transmitted principally through airborne respiratory droplets. It must have been painful for the CDC to admit prior guidance was essentially nonsense…

Findings of these studies suggest that the risk of SARS-CoV-2 infection via the fomite transmission route is low, and generally less than one in 10,000. That means each point of contact with a contaminated surface has less than a one in 10,000 chance of causing an infection.

And the CDC was surprisingly honest in revealing that “there have been increases in poisonings and injuries from unsafe use of cleaners and disinfectants since the start of the COVID-19 pandemic.”

Better yet, the CDC went further to say, “There is little scientific support for routine use of disinfectants in community settings, whether indoor or outdoor, to prevent SARS-CoV-2 transmission from fomites.”

And they knew that the path of transmission was an airborne virus. Yet so many of these epidemiologists, virologists, and physicians were shamed and censored for simply sharing facts from existing scientific research.

In fact, in July of last year, 239 scientists from 32 countries published an open letter in the journal Clinical Infectious Diseases precisely about the airborne transmission of COVID-19.

And in that same month, another study was published in The Lancet, which highlighted that government advice about deep-cleaning surfaces was “thin and probably flawed.”

For most of us, the hardest part isn’t realizing that what we were told was all wrong. It is trying to wrap our heads around the fact that everything that we have been doing hasn’t meant anything at all. It didn’t make us any safer, and it simply didn’t do anything to stop the spread.

Google Maps for the airport…

Google just announced that Google Maps will receive an artificial intelligence (AI) overhaul. Over the next year, Google plans to bring more than 100 AI-powered improvements to the navigation app.

These advancements are a game changer. They will vastly improve the way we get from point A to point B, whether on the road or inside large transportation hubs.

The first glimpse into how this technology works was showcased in the Zurich Airport. We can see it in the short video below.

The AI can help users navigate on foot through a large airport. It overlays directional cues on the image of the user’s surroundings with augmented reality (AR) technology. How neat is that?

Google calls it Live View, and it can work without GPS. It’s all AI.

And this can have many benefits. International airports are notoriously massive structures, and it can be easy to get lost moving from one terminal to another.

Google Maps’ AI solves that problem. It can tell travelers exactly where to go so they can get to the proper terminal.

What’s more, Google plans to integrate Maps with weather information, air quality warnings, and various transportation options. The company even showed how the app can provide an alternative route that reduces carbon emissions.

We’re talking about a lot more than a simple navigation tool here.

This massive overhaul is the direct result of Google mapping out the entire world by car and on foot. Employees even trekked around wearing backpacks with 360-degree cameras on them to map out remote places. Have a look:

All this footage created a massive data set. That’s how Google’s AI is so good. It doesn’t need to rely solely on GPS (location) data to determine the exact location anymore.

It can now use image and pattern recognition to identify exactly where the consumer is in an airport or train station, which enables it to provide precise directions.

Remember the days when navigating the road required one hand on the steering wheel and a map in the other? We’ve come a long way. It’s been a massive digital leap in navigation.

It’s important that we don’t forget that this convenience will come at a cost. Regular readers already know what that is: privacy.

Google will track our movements and our location through this app. It will then package this data and sell it to advertisers. That’s the trade-off – privacy for convenience.

And I suspect that most consumers will continue to sacrifice their privacy for the convenience of this new, “free” technology.

Researchers from the Massachusetts Institute of Technology (MIT) have developed a new form of AI that can diagnose patients with melanoma.

This is the most common form of cancer in the United States. And it is responsible for more than 70% of all skin cancer-related deaths worldwide.

The AI was developed using deep convolutional neural networks (DCNN). And this technology works with computer vision to map out skin lesions on patients. The AI analyzes these lesions to determine which ones might be cancerous.

This is no small feat. It’s very difficult to determine if a mole, bump, or lesion is cancer-free with 100% certainty. This video spells that out:

As we can see, each spot looks rather similar to the naked eye. But the AI can do a deeper assessment to highlight which lesions are most likely to be cancerous. Then a doctor can conduct a biopsy or further analysis on the spots the AI highlights.

This is something that can have an immediate impact on millions of lives.

In the United States alone, one in five Americans will develop skin cancer by the age of 70. And 9,500 people are diagnosed with skin cancer every day. It’s a wide-ranging cancer.

Yet when it is detected early, the five-year survival rate for melanoma is 99%. That’s why this development is so important.

And I should point out that this type of complex task is great for AI. With every diagnosis of melanoma, the AI improves its accuracy and reliability. It learns by doing, in other words.

This is yet another example of how AI is advancing rapidly. It’s also more evidence that a digital leap is happening in the health care industry right now.

We’ll wrap up today with the latest on a topic we discuss frequently here at Brownstone Research – special purpose acquisition companies (SPACs).

SPACs are often referred to as “blank check companies.” They are formed specifically to pool funds together via an initial public offering (IPO). The capital raised then finances a merger with a private company in a targeted industry. That way, the private company can circumvent the IPO process entirely.

What’s interesting is that SPACs now make up more than a quarter of all merger and acquisition (M&A) deals. This year, SPACs have accounted for $172 billion worth of M&A deals in the U.S. alone. 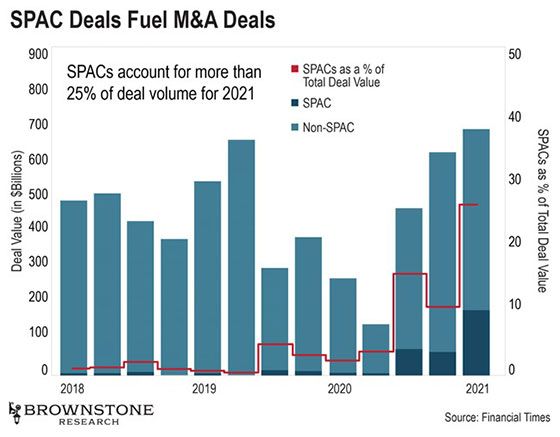 Talk about an incredible run! And this has helped fuel M&A activity to heights not seen since 1980.

What’s more, SPACs are helping notch records in not just the M&A market but the IPO market as well.

We are only three and a half months into the year, and 2021 is at all-time highs in terms of capital raised and offerings for IPOs. This is in part thanks to $3.1 trillion of dry powder sitting in the market as of February 2021.

To put this into perspective, we can look back at last year’s IPO market. In 2020, we saw an all-time high of $172.8 billion raised through 552 offerings.

SPACs in 2021 alone have raised $99 billion. This is clearly influencing the IPO market in reaching new highs.

SPACs are transforming the IPO market. More private companies are going public than ever before thanks to blank check companies.

In turn, we’re seeing the kinds of companies that a larger public or private corporation would normally acquire opt for the public markets instead.

This is great since it gives normal investors access to opportunities that would otherwise not be accessible.

This trend is not going away, and the structure of SPACs will continue to improve this year in a way that will be better for normal investors.

We’ll continue to recommend the best SPACs on the market today in my premium research service Blank Check Speculator. For those interested in learning more, just go here.