And that’s what makes the current situation in the semiconductor industry unusual. Prices are actually going up. And there is no better example of what is happening than the recent announcement made by the world’s largest contract semiconductor manufacturing company – Taiwan Semiconductor Manufacturing (TSMC).

TSMC’s announcement is meaningful because it has a market share amongst semiconductor foundries greater than 50%.

And this bleeding edge company is responsible for about 90% of the world’s most advanced semiconductor manufacturing.

Many have said that the price increase is caused by the supply chain shortages and that TSM is leveraging its own pricing power in the industry. Yes, there are certainly shortages, but something much different is happening right now. And Bleeding Edge readers won’t be surprised at all.

The reality is that demand for semiconductors is off the charts right now. The rate of technological change continues to accelerate as we can see each week in The Bleeding Edge.

Technology, consumer electronics, medical, industrial, and automotive companies are bringing new products to market faster than ever before. And all of these products are using more semiconductor content than in previous product generations.

Nothing has been able to stop this trend. The pandemic certainly didn’t. Even economic lockdowns couldn’t make a dent. It’s a flywheel effect.

And the employment of artificial intelligence (AI) in electronics is only having a multiplying effect. This is a thirst that will never be fulfilled.

As consumers, we’re going to feel the increases in semiconductor prices here and there. Ultimately, these prices get passed on down the line and land on consumers. Most corporations won’t choose to maintain prices and accept lower gross margins, so we end up footing the bill.

But TSMC was right to raise prices. I don’t view this at all as an abuse of its own pricing power – that’s more in the realm of companies like Pfizer and Moderna.

With each successive generation of semiconductors, the cost of building a semiconductor fabrication plant increases. More research and development is required as well. For TSMC to stay on the bleeding edge, it has to consistently invest in the next generation. And it has to do this every single year.

There is no down time… no time for a rest… no industry slowdown. If anything, the industry is speeding up. And if the world wants to continue enjoying life-changing technologies, and sometimes lifesaving technologies, we want TSMC to be successful in its mission.

We are amidst a “tech shock” right now. A moment in time when things are changing so quickly… Demand is so high that it is hard to keep up. There are going to be some unbelievable winners as a result.

Near Future Report portfolio company Taiwan Semiconductor Manufacturing (TSM) is already one of them. There are many others. And many more will be left behind…

I know which side of the fence we’ll be on here at Brownstone Research.

Blockchain company Circle continues to press forward with its masterstroke.

As a reminder, Circle is one of the companies behind the U.S. Dollar Coin (USDC). And just last week, Circle applied for a narrow bank charter. As we discussed, this was nothing short of a backdoor move to become a central bank digital currency (CBDC).

That’s because a bank charter would allow Circle to hold its cash reserves at the Federal Reserve (the Fed). And at that point, USDC would be backed by the Fed – the central bank of the United States.

Through a consortium that includes digital asset exchange Coinbase, Circle announced that USDC’s reserves would all shift into cash (U.S. dollars) and short-term U.S. Treasuries.

This is a big move. Up to this point, about 39% of USDC’s reserves were in a blended mix of longer-duration Treasuries, foreign certificates of deposit (CDs), and corporate bonds.

All that’s left now is for Circle to finish the process of becoming a public company. Once that’s done, everyone will be able to gauge the company’s financial status at any time. That provides total transparency, which is critical when it comes to regulatory assessment.

The way I see it, Circle and Coinbase are creating an “easy button” for the U.S. government here. The big advantage is that they are two leaders in the blockchain industry that have ironed out all the technology required for a functional stablecoin that’s backed 100% by U.S. dollars.

All that’s left is for Circle to become a public company and receive its bank charter to provide central bank backing.

From the government’s perspective, adopting USDC would eliminate the need to design and develop its own CBDC. And we should keep in mind that this process would be incredibly tedious. It would involve all kinds of politics, committees, and red tape, which in turn would delay the development significantly – years, potentially.

And that would put the U.S. at risk of falling behind China and the other countries that are much further along in the process of launching their own CBDCs.

I see this as a brilliant move. There’s no guarantee that Circle will be successful with its masterstroke, but it has positioned USDC in such a way that the Fed, policymakers, and regulators will have to consider adopting it as a CBDC.

In another sign that non-fungible tokens (NFT) are here to stay, Facebook just announced that it will support NFTs in its digital wallet Novi. This is a big move.

And Facebook’s Novi wallet is its Trojan horse. The wallet is designed to hold digital assets, but it will eventually offer a slew of financial services, including loan products.

Facebook has positioned Novi as something that’s for the benefit of all mankind. But the company’s true intentions aren’t so magnanimous. Really, it’s all about the data. Facebook ultimately wants to see all of our financial transactions flow through the Novi wallet.

So it makes sense that Facebook is interested in supporting NFTs. After all, social media platforms are all about virtue signaling. It’s about presenting the best image of oneself. And many users strive to demonstrate to others that they are important and good through their social media presence.

And what better way to do that than with NFTs?

If we think about it, not many people will ever see the art we have hanging in our homes. But if we can show off our art in a digital wallet, nearly all of the world can see it. And I mean that. Facebook has 2.9 billion users right now. And it will push Novi and its NFT functionality out to all of them.

So it’s easy to see how Facebook could accelerate the adoption of NFTs very quickly here. To me, this is a sweeping validation of the asset class. It’s just more proof that NFTs are here to stay.

That’s why I’ve made sure to introduce my readers to this asset class in these pages. This is no fad. NFTs are already growing exponentially and gaining awareness in the public consciousness. And once Facebook makes its move, we can expect things to really take off.

The “tokenization” trend is going to be big. That’s why I’d encourage any readers who are interested to get in now – while it’s still early. And if anyone wants to learn how to begin investing in this space, simply go right here to check out my recent presentation.

Technological advancement is about to ramp up even faster…

We first talked about a company called Cerebras in these pages two years ago. That was when Cerebras first announced that it had made the world’s largest semiconductor. Here it is: 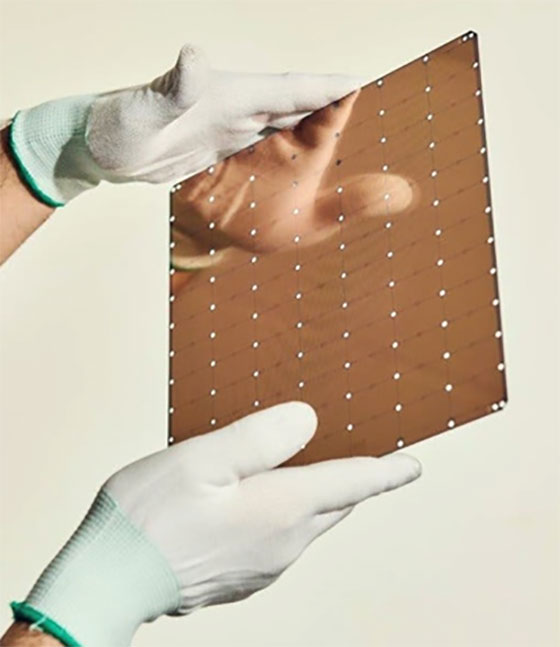 This is a nearly 9×9-inch slab of electronics. The latest version has 2.6 trillion transistors and 850,000 cores that are optimized for AI.

In short, this thing is a beast.

And Cerebras just announced something remarkable. Its new chip design can support neural networks – a form of AI – with 120 trillion parameters. That’s more than 100 times greater than the leading edge today.

So this is an incredible announcement. And here’s the key – the human brain only has about 100 trillion synapses. That means AI powered by Cerebras’ chip can make simultaneous computations at or above the level of the human brain.

This is something the industry has been working toward for decades. This is the inflection point for AI.

When we have advanced neural networks that can run 24/7 without ever getting tired, we can be sure that incredible technological breakthroughs will follow quickly. The rate of technological advancement is only going to increase from here.

And to be candid – this is when things start to get weird.

Cerebras’ chip is for sale right now for several million dollars. Any organization with the means can buy it and put it to work. And it will work to solve all kinds of problems – some that we can’t even imagine right now.

We’re going to see some really strange developments come from this. Human-like interactions with an AI would be a perfect example. Having an AI speak with you in a way where it knows you better than yourself is going to be very uncomfortable for many people.

And things will simply get done. Advanced AIs will predict necessity and take action in advance. I know it’s hard to do so, but we’ll need to get ready and expect these kinds of radical changes.

That said, most of this work will be done with good intentions. But I’m sure there will be some bad actors who use advanced AIs for nefarious purposes. Cybersecurity is only going to become even more critical – preferably that which is powered by its own AI.

The bottom line is this… The genie is out of the bottle. This has already been a landmark year in terms of developments in artificial intelligence, and we still have four months to go.

I can all but guarantee that I’ll be sharing at least two or three more major developments in AI with you before the year is out. We’re in for one heck of a ride.