“We are back with a vengeance.”

When I heard these words from Pat Gelsinger, the new CEO of Intel, I so badly wanted them to be true.

It has been sincerely painful for me to watch one of the greatest technology companies of all time make misstep after misstep, year after year. Intel has fallen woefully behind in the semiconductor industry.

Far more agile and nimble competitors like AMD, NVIDIA, Xilinx, Mellanox, and so many others have been precisely and intentionally eating Intel’s lunch for years.

Intel has been living off of the dominant position forged from its partnership with Microsoft based on its x86 chip architecture – often referred to as the “Wintel duopoly.” This partnership has survived for the last two decades, but the cracks in the dam are prominent.

Computing has moved away from desktops and laptop computers to lighter, more mobile devices like tablets and smartphones. These require different computing architectures and operating systems, both of which Intel completely missed out on.

And what comes next will be even more dramatic.

Our common user interface with computing systems will soon migrate to augmented reality (AR) software coupled with artificial intelligence-powered digital assistants and haptic devices that enable us to interact with our augmented environment. Intel has nothing to show for this either.

What bothers me so much is that Intel has the scale and financial resources to make something big happen. It sits on a cash hoard of over $29 billion, has healthy gross margins around 57%, and will generate $14 billion in free cash flow this year alone.

Yet the forecasted revenues for Intel in 2021 are less than 2% higher than Intel’s 2018 revenues. Adjusted for inflation, there’s no growth there.

It should be building the most advanced semiconductor manufacturing facilities on the planet.

That means that Intel is literally three manufacturing generations behind TSMC – that’s a multiyear advantage.

So what was it that made the hairs on the back of Gelsinger’s neck rise with excitement? How exactly did he plan to bring Intel back with a vengeance?

Intel announced it is investing $20 billion to build two new manufacturing sites in Arizona. It is also planning to become a “major provider of foundry capacity.” In other words, it wants to position itself as a manufacturer for the fabless semiconductor companies that it typically competes with.

When will this all happen? Planning and construction will start this year, and production will begin in 2024.

And what are Intel’s plans for the next three years? Intel’s big announcement is that it will outsource some of its own production to other semiconductor manufacturing firms like TSMC and Samsung.

The company is so far behind in manufacturing, it needs to pay other people to produce its own chips.

Yet it squanders away its capital on acquisitions year after year to make up for its shortcomings, and it consistently fails to integrate and monetize those acquisitions. To name a few: Habana Labs for $2 billion in 2019, Mobileye for $15.3 billion in 2017, and Altera for $17 billion in 2015. Make it rain!

I can think of a lot of things that are coming with a vengeance over the next few years. Sadly, one of them will not be Intel.

This loophole helps us value SPACs…

Specifically, the SEC is looking at a key loophole that allows SPACs to give forward-looking projections… even though companies pursuing a traditional initial public offering (IPO) are restricted from doing so.

This is important because this loophole provides savvy investors with key insights into how private companies are looking at their future business. This is very useful in determining how to value SPACs.

To bring new readers up to speed, SPACs – or “blank check” companies – go public in order to combine with an existing private company. The private company does a reverse merger into the publicly traded SPAC.

And that’s where the loophole comes from…

With a traditional IPO, the regulations are such that companies are primarily limited in their ability to talk about their future business. Forward looking statements beyond the current fiscal year are highly unusual for those companies looking to go public via a traditional IPO process.

With SPACs, the blank check company goes public before combining with the private company. So when a private company conducts a reverse merger with a SPAC, that’s not considered a traditional IPO by the SEC. Thus, it’s not restricted by the same regulations.

What many investors may not realize is that SPACs have been taking advantage of this loophole. Most SPACs are projecting large revenue streams well into the future – sometimes six or seven years in advance.

That’s what the SEC meeting was all about. The regulators are trying to decide if they need to apply the same structure to SPACs as is used with traditional IPOs… or if they should remove the restrictions on traditional IPOs so that they are on the same playing field as SPACs.

Of course, there is also a chance that the SEC will make no changes at all.

From an analyst perspective, I like to see what the private company going public thinks about its future revenues. I don’t have to believe them, but these forecasts give me insight into the assumptions these companies are making about the future. I use that data in my own analysis.

This is exactly the kind of information that I use to determine if I want to recommend a company now because its valuation is not well understood, or if I want to wait for the market to realize that the company is grossly overvalued.

Ultimately, this ends badly for investors as a stock falls back to a fair valuation. I’ll just wait patiently for that moment to get my subscribers in at a great price.

So my preference is for the SEC to allow traditional IPOs to provide forward guidance just like SPACs. I don’t think that will happen, though. That’s a change that would be hard for the SEC to justify.

The sudden prominence of SPACs as a vehicle for exciting private companies to go public has really caught the attention of the SEC. Many are wondering if this trend will persist.

I’m not. SPACs are here to stay. And while there are always bad actors in every market, there will continue to be incredible, high-quality investment opportunities for years to come.

And of course, we’ll continue to provide top-tier research on SPACs here at Brownstone Research. For our latest SPAC recommendations, join us here.

Snapchat is unlocking the future of e-commerce – just as predicted…

It has been nearly two years since we checked in on social media company Snap – maker of the popular Snapchat application. We last talked about the company back in August 2019, when Snap released its Spectacles 3 smart glasses product.

At the time, I said that this was a “lens” on the future. I predicted that Spectacles 3 would be the precursor to a big move into augmented reality (AR) for Snap. And that’s exactly what has happened…

Snap has made some great strategic moves in the AR space, but most of this functionality was limited on previous smartphone models. Older smartphones simply didn’t have the hardware required for augmented reality.

But the launch of Apple’s iPhone 12 last November unlocked Snap’s vision for AR. That’s because the iPhone 12 is equipped with LIDAR (light detection and ranging) sensors that provide incredible depth perception and 3D-sensing capabilities.

As a result, Snapchat can now provide some interesting e-commerce applications using its AR technology. Its years of research and development are about to pay off.

For example, if we are furniture shopping, we can hold up our phone in our own home as if we’re taking a picture of the room. Snapchat could then display our favorite couch in the spot where it would go, allowing us to see how it would fit with everything else in the room. Then we can decide whether we want to buy it or not.

This works just the same way for clothes shopping as well. Imagine picking out a new pair of shoes, pointing our phone at our feet, and seeing what they would look like on us. And we can do this all right from the comfort of home.

Trying on Shoes With AR 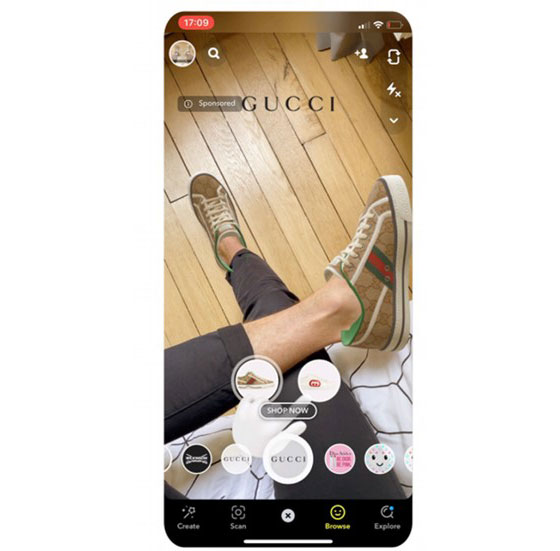 Of course, there are countless other applications, including functionality in a brick-and-mortar setting. I envision sitting down at a restaurant and having lifelike 3D images of two or three different meals displayed for us in AR. That would help us decide what to order without taking up any of our server’s time.

So Snap’s take on AR makes perfect sense. It’s a versatile technology that can enhance and simplify purchases for consumers. That’s why I have said for years that AR will be the next mass-market consumer frenzy whenever somebody cracks the code.

With its strategic moves, Snap will be one of the major players in the application space, strongly focused on commerce.

Artificial intelligence is going mainstream for photos and graphic design…

Adobe just announced a new feature for its Photoshop software. This is what many professionals in the video and graphic design space use to edit and enhance pictures.

Photoshop now employs artificial intelligence (AI) to analyze and improve the resolution of images. In fact, this new feature, called Super Resolution, can quadruple the number of pixels in any photo.

Adobe trained the AI on millions of pictures using a machine learning model. That is how the AI learned to “fill in the gaps” to increase the resolution of any image, large or small. This can serve a variety of useful purposes.

I bet many of us have stumbled upon an older photo on our computer that we wanted to enlarge at some point. But when we go to make it bigger, the image gets fuzzy. That’s what happens to images with a low pixel count.

In this instance, Super Resolution could be used to quadruple the pixels, thus allowing us to enlarge the image without losing quality. That’s its most basic functionality.

Even more interesting, the AI can be used to uncover details in old or low-quality images. This could be especially useful in detective work.

Imagine an agent working on a crime with a grainy image taken from a video camera at a distance. The agent can see the prime suspect flee the crime scene in a car, but the photo quality isn’t good enough to make out the license plate number.

Well, Super Resolution could enhance that image so the license plate is readable. That’s a powerful tool.

And I like that this shows how AI is going mainstream. Adobe is making this feature available to all its customers in the latest version of Photoshop at no extra cost. And we should note that Photoshop only costs $20.99 per month. It’s a mass-market product.

As we discussed on Monday, AI isn’t something that’s a decade away. It’s already here. This is just more proof.

We’ve been profiting from this trend for years now in The Near Future Report and Exponential Tech Investor. And the best part is, there is so much more to come.

The adoption of AI is going to be a decade-long trend that presents us with some incredible investment opportunities.

P.S. Don’t forget that the replay of our Timed Stocks: Final Countdown investor summit will be available through midnight eastern time tomorrow night. Those who missed it last week can find the replay right here.