I had the pleasure of speaking with Alex Marlow on Sirius XM this morning for about a half an hour.

Not surprisingly, our time was spent talking about the cause of inflation, and how we can hedge against this persistent spike in inflation, as well as the continued and intentional devaluation of the U.S. dollar.

He was also interested in the Great Reset – and what I call the Great Recalibration – as a massive shift away from the centralized production models that have been put in place over the last several decades.

Alex was concerned about the shortages that we’re seeing right now around the world. It isn’t just in semiconductors and consumer electronics – but also in food, fertilizer, raw materials, chemicals, compounds for medicine, and even the raw wafers upon which semiconductors are etched.

Unfortunately, I said that things are going to get worse before they get better. To use Alex’s words, there is a “silver lining.”

These shocks to the world’s systems, supply chains, and basic necessities are prompting an acceleration of the Great Recalibration.

This will result in a far more resilient world, one less prone to the shocks that we are experiencing right now. And the added benefit is that these changes, this recalibration, will also be better for the environment.

I’ll have some more time this evening to dig deeper on these topics at my State of the Tech Market strategy session.

If you haven’t yet signed up, I’d like to encourage you to do so right here while there’s still time.

Each of these circumstances has an impact on how we should behave as investors. That’s why I want to come to readers with the latest on our strategy here at Brownstone Research.

And tonight at 8 p.m. ET, I’ll speak about the only investing method I know that is inflation-proof… crash-proof… and recession-proof.

I’ll also share from my own personal investing experience… and offer the name of one promising company with attendees.

We will cover all this – and a lot more. So please, if you have any money in the markets… or if you’re worried about where the markets are going from here… please take the time to tune in. You can RSVP right here.

I’m confident it’ll be the most valuable event you’ll attend all week.

That alone has set financial media ablaze. And this is about something much bigger than just investment gains…

As we would expect, the market loved this move. Twitter’s share price spiked 26% immediately after the news broke. And as I write, TWTR is now up 31% on the week.

This means that Musk has already made over $800 million on his investment.

Even so, that’s not his primary motivation here.

Instead, this appears to be a premeditated move to gain control over Twitter. We can see this in Musk’s cryptic tweets from last week: 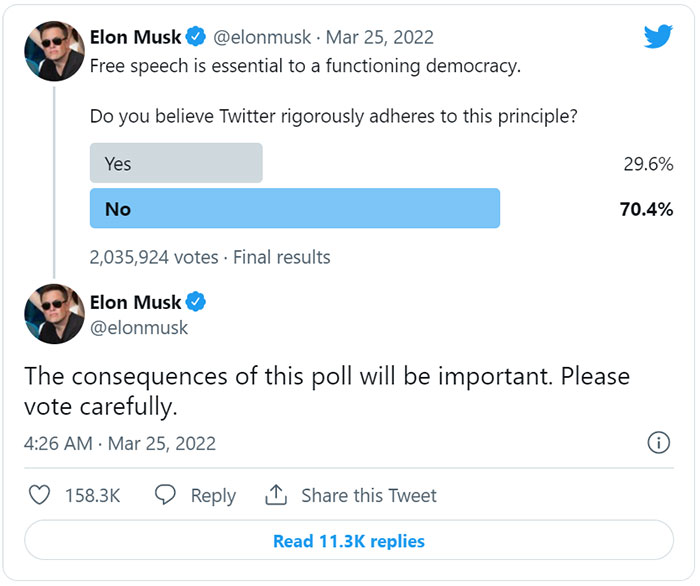 Here we can see that Musk conducted a poll concerning Twitter’s support for free speech last month. He even suggested that the results of the poll would have consequences.

And as we can see, over 70% of participants – more than 1.4 million people – said that Twitter does not adhere to the principle of free speech. That prompted this: 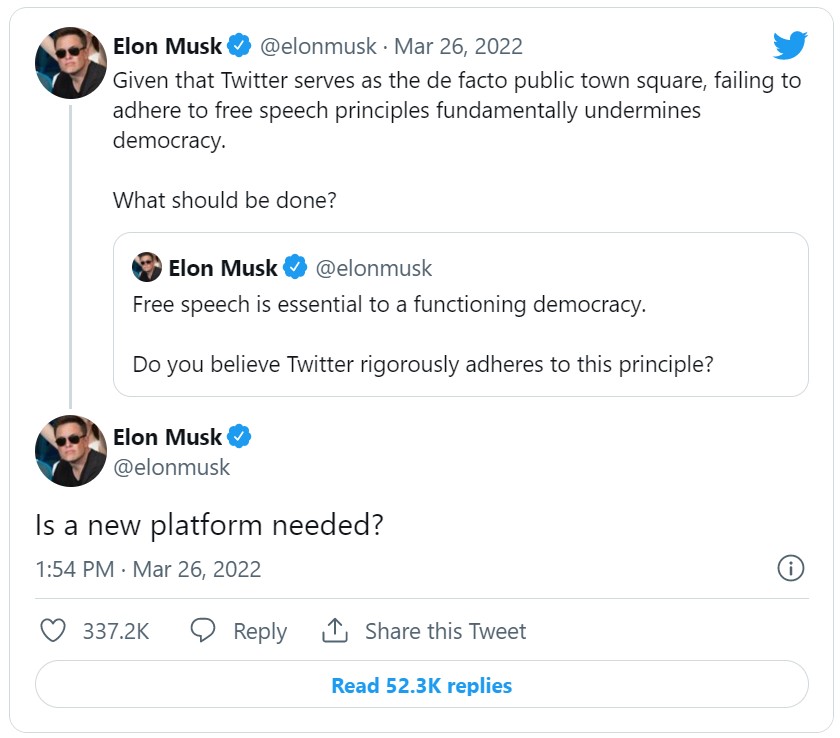 Here Musk acknowledged that Twitter has failed on the free speech issue, and he asked if we needed a new platform – sparking a lot of speculation about whether Musk would attempt to create his own social media company.

But now Musk has revealed his true card: Why start from scratch if you can fix what’s already built?

Twitter has egregiously censored information and opinions that run counter to the mainstream narrative in recent years. It’s even banned prominent individuals from using the platform. That list includes former president Donald Trump, who was a sitting president at the time.

That’s what this is all about.

Musk is an ardent supporter of free speech. He often leans hard into libertarian principles.

And he is working to restore free speech to Twitter. He considers it a modern town square – the central location where neighbors gather to share information, opinions, and news.

I believe Musk is working to align with a handful of other large investors to gain control of Twitter’s board of directors. Control is the key.

Even though he can, Musk doesn’t need to buy Twitter outright. If he can control the board, he can put a stop to Twitter’s overreach and restore free speech to the platform.

And sure enough, Twitter announced that Musk will join its board yesterday. That’s the first domino to drop.

We’ll see if Musk can build or bring in a strategic coalition from here. If not, he can always buy the company outright.

We may wonder – why would Twitter give Musk a seat at the table given his harsh criticisms?

The answer is that board members cannot own more than 14.9% of the company’s outstanding shares. Twitter is effectively ensuring that Musk doesn’t buy a controlling interest in the company.

So this is going to be a thrilling story to follow. I’m excited by this move as it represents some hope for open discourse and an end to the deplatforming of individuals and banning of scientific research.

If we can have at least one of the major social media platforms free of censorship, that would be a huge improvement over how our information is currently manipulated and filtered today.

As regular readers know, I am also a big believer in free speech. I’m very happy to see Musk taking a stand here. We need to hold Twitter and “Big Tech” accountable for their transgressions.

The company already has a massive network effect in place with 217 million daily active users. Musk can restore confidence for users who are thinking about leaving the platform due to censorship.

And he will undoubtedly drive even more people onto the platform because he has such a large personal following.

I think we’ll see big things from Twitter in the coming months.

We have talked recently about popular “Web 2.0” games making the leap to a “Web 3.0” model. And we just had a big development on this front: Minecraft is rapidly becoming a “play-to-earn” game.

As a reminder, Web 3.0 games have economic incentives built in. They feature a play-to-earn model where players can earn cryptocurrency by completing tasks in the game.

Often, players acquire items in the form of non-fungible tokens (NFTs) that they can then sell and convert into Ethereum (ETH) or national fiat currency like U.S. dollars.

This model allows gamers to earn income as they play. As we discussed back in October, many people in Southeast Asia at one point were earning enough money playing a popular Web 3.0 game to make it their primary source of income.

Simply put, Web 2.0 games need to make the leap to the Web 3.0 model if they want to survive and thrive in the years to come. The economic incentives are just too strong for many gamers to pass on.

This has always been an area of weakness for Minecraft.

The game is incredibly popular among young people. In fact, 141 million people actively play the game each month. And this success led Microsoft to acquire Minecraft for $2.5 billion in 2016.

Still, Minecraft did not have any economic incentives baked into the game.

The project created unique NFTs to populate these worlds, and existing Minecraft players could enter them to acquire these NFTs. Then players could sell these NFTs for Ethereum.

That added something of a play-to-earn concept to Minecraft… but this wasn’t something that was endorsed by Microsoft. That’s because NFT Worlds operated independently, which meant Microsoft had no control over the development.

Some worried that Microsoft would put a stop to what NFT Worlds was doing. And that would put a ceiling on player adoption.

Well, Minecraft just made a move into Web 3.0 that Microsoft will stand behind.

It announced a partnership with the Alien Worlds metaverse – one of the largest play-to-earn blockchain games out there right now. The deal will allow Minecraft players to earn Alien Worlds’ native cryptocurrency Trillium while playing Minecraft.

As I write, one Trillium (TLM) is worth $0.13. And there are 914 million Trillium tokens in circulation. That gives the cryptocurrency a market cap of $122.5 million.

And, of course, we can sell TLM for ETH and then convert it into U.S. dollars or other national fiat currencies.

So this is truly a bridge for Minecraft to enter the Web 3.0 world. This will help incentivize current players to continue playing.

And we can expect Minecraft to move more fully into a Web 3.0 environment over the coming years. That would require in-game NFTs and potentially a native cryptocurrency as well.

Either way, we are at the start of a massive trend here. All the most popular Web 2.0 games, many of which are metaverses in their own right like Minecraft, will need to make similar moves sooner rather than later.

And that’s why I’ve made sure to position my Unchained Profits readers in advance of this trend really taking off. Web 3.0 – as well as NFTs – are becoming a huge ecosystem that investors need exposure to.

To learn more about how to join us, simply go right here.

Another fascinating application for CRISPR technology…

We’ll wrap up today by talking about something we wouldn’t expect to see in The Bleeding Edge: Cows.

A company called Acceligen recently used CRISPR genetic editing technology to create a new kind of cow. The scientific label for these CRISPR cattle is PRLR-SLICK. 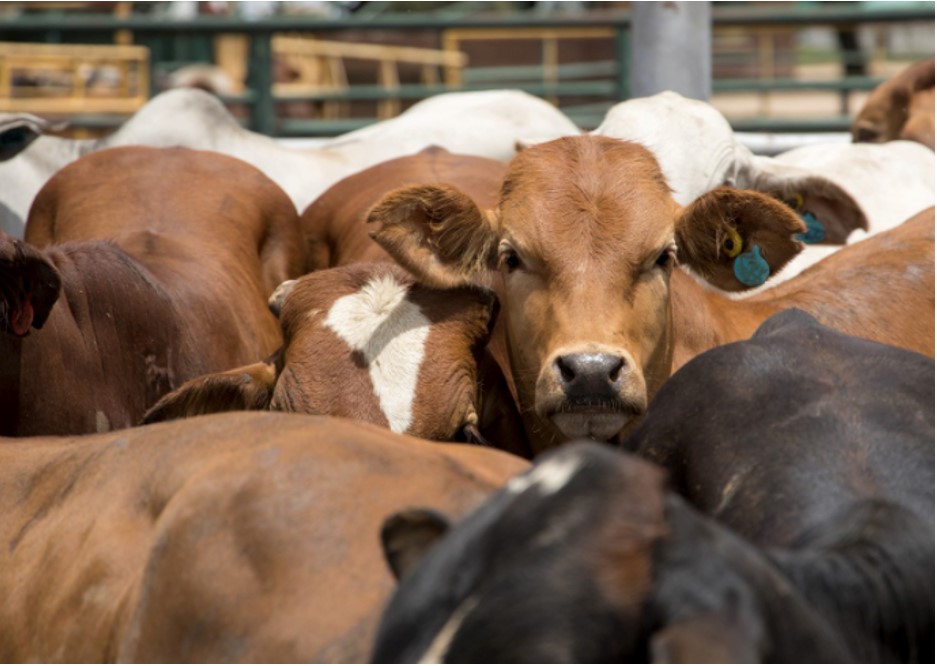 Looking at these cattle, do we notice anything different about them?

Unless we have some seasoned cattle ranchers reading, I suspect the answer to this is no. They look just like regular cows.

But there is a difference.

Acceligen used CRISPR to modify the gene responsible for a cow’s hair, and as a result, these cows each have an extremely short, “slick” coat.

This may seem like a strange thing to focus on, but there is a reason.

The short coat will allow these cattle to do better in warmer climates. They won’t get as hot in the summer months, and that will reduce the amount of stress experienced over their lifetimes.

Happy, healthy cows ultimately produce a better product for consumers. In a way, it directly impacts the production yields and higher quality meats.

What’s more, this genetic modification is inheritable. When PRLR-SLICK cattle breed, they will pass the modification on to their offspring. That’s why CRISPR is such a powerful tool when it comes to agriculture.

And here’s the most important part of the story…

The U.S. Food and Drug Administration (FDA) conducted safety trials and determined that there are no food safety concerns for human consumption of PRLR-SLICK meat. As such, the FDA approved these genetically modified cows for us to eat.

CRISPR technology simply modifies the cows’ existing DNA. It does not introduce any foreign DNA into the cow. For this reason, companies don’t need to label PRLR-SLICK meat as a genetically-modified organism (GMO), which would subject it to heightened regulatory protocols.

This is absolutely a landmark development.

For one, avoiding the GMO label will make it much easier for farmers to take PRLR-SLICK meat to market. The FDA expects that will happen within the next two years.

Bigger picture, this sets a major precedent. We will likely see CRISPR applied to more animals raised for human consumption as a result of the FDA’s favorable ruling.