Welcome to our weekly mailbag edition of The Bleeding Edge. All week, readers submitted questions about the biggest trends in technology. Today, I’ll do my best to answer them.

Quantum computing is not the end of blockchain technology…

First up, a reader has a question about quantum computing and what it could mean for blockchain technology…

Thanks for the great question, Scott. I love hearing from readers who are genuinely curious about bleeding-edge technology.

For readers who don’t know, quantum computers can perform calculations faster than even the best supercomputers. They are also capable of working on far more complex problems with a seemingly unlimited number of variables, something even a supercomputer using today’s classic computing architecture struggles with.

The limitation of quantum annealing technology is that it can only be applied to solving a specific problem, like optimizing a complex problem with a lot of variables to find the best solution. And, yes, that problem might be to “crack” a blockchain.

It will be possible for a quantum computer to crack a blockchain, but the key is that all blockchain technology is not the same. The blockchain industry is already anticipating that quantum computers could be used for malicious purposes and is working on solutions to thwart that kind of attack.

There is already a new blockchain project called Quantum Resistant Ledger that is designed from the ground up to be immune from quantum computing attacks. But the solution isn’t necessarily designing completely new blockchains.

One of the great things about blockchain technology is that it can be upgraded. It is software, after all. Any of the existing blockchains – Bitcoin, Ethereum, EOS, Stellar, Cardano, and so forth – could conceivably receive a quantum-resistant upgrade when the time is right.

5G is coming to a home near you…

Next up, a great question on the rollout of the 5G wireless networks…

Hi Jeff, as a follow-up to last week’s discussion of 5G, will those of us in “semirural” areas be able to obtain 25 Mb, 50 Mb, or 100 Mb of broadband from 5G providers for a reasonably competitive price to the current broadband cable providers? Rural cable providers have a reputation of very poor service (customer and otherwise…).

This is such an important question and one that I have personally been affected by.

I have received appallingly bad customer service from my local CATV provider for internet service. I have wasted days of my life waiting on hold to try and resolve issues.

According to the American Consumer Satisfaction Index, a yearly measure of customer satisfaction for a broad range of U.S. companies, internet service providers (ISPs), which are primarily CATV companies, are the most disliked companies in America. They were ranked even lower than airlines. And people hate airlines. 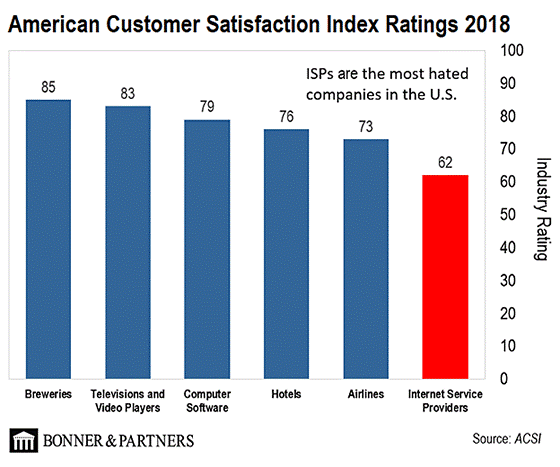 And the reason is that in most cases, CATV companies have monopolies. They have historically pretended to have a competitive marketplace, but in reality, in most markets around the world, there is only one “line” or “cable” that connects each home to the internet.

It is a minority of markets around the world where there is both a CATV option and a fiber to the home option from a telecommunications company.

This is why 5G technology is so exciting. 5G is the first wireless technology capable of providing fixed wireless broadband internet services to the home that are faster than the average speeds that most consumers see today.

Just plug in a 5G router to an electrical outlet and you’ll be good to go.

And this isn’t far off in the future. Verizon already offers fixed wireless broadband internet services to several markets around the U.S. Other countries won’t be far behind either. The 5G router looks something like this: 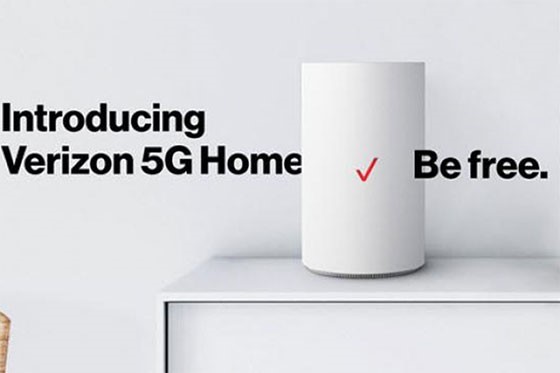 5G will likely be available in 100 markets by the end of the year. When these 5G networks are ready, don’t be surprised to see more 5G services offered by the wireless carriers.

Now, as for the rural deployments, this is a matter of time.

After all, Verizon, AT&T, and T-Mobile/Sprint will be focused on building out the most populous markets around the U.S. first and then deploying 5G to less populated areas second. The more rural, the longer it will take.

It is the same in any country in the world… basic business economics. Build out the largest revenue-generating markets first and use that cash flow to fund the build-out in the rest of the markets.

The source of the 5G misinformation?

Let’s conclude with a question I hear frequently from readers…

So I’ve read that sufficient health studies associated with 5G frequencies and radiation have NOT been done. Your comment?

Thanks for writing in, Dean.

I’ve discussed this in the past for my Near Future Report subscribers. For my answer, you can go right here.

But I’d like to address another aspect of this topic: the potential source of these questions on the safety of 5G.

You might be skeptical when you hear what I have to say, but please keep an open mind.

And, of course, the absence of these networks would be a severe competitive disadvantage at a national level. So it’s in the best interest of countries to build out these networks nationwide as quickly as they can.

In February, Russia launched its own 5G program. But its progress on the 5G rollout is far behind the United States or China…

That’s why, earlier this year, RT America (formerly “Russia Today”) aired a segment titled “A Dangerous ‘Experiment on Humanity.’” The media piece outlined how 5G is connected to everything from brain cancer, infertility, and even Alzheimer’s despite having no scientific support.

Keep in mind, RT is funded by the Russian government. And we already know that the Russian government has been proven to have highly structured programs to mingle in U.S. affairs and influence public thinking. RT is widely considered to be a propaganda machine to support Russia’s interests.

And what better way to slow down America’s 5G rollout – and give Russia time to catch up – than to spread misinformation and doubt about the safety of the technology?

You might be skeptical. But keep in mind, 5G is expected to unleash an estimated $12 trillion in wealth in the coming years. Whichever country sets the 5G precedent will be the economic powerhouse of the next decade.

We should ask ourselves this: What wouldn’t a government (with questionable ethics) do to secure that advantage?

Either way, I keep a close eye on any legitimate research related to wireless technology. And when I discover anything of interest (good or bad), my readers will be the first to know.

That’s all we have time for this week. I’ll write to you again on Monday with our regularly scheduled issue of The Bleeding Edge.

If you’d like me to answer your question next week, be sure you submit it right here.