Tonight, I will be issuing my Emergency Briefing. We’ll get started at 8 p.m. ET sharp.

There’s an incredible opportunity staring us in the face right now. Thanks to recent government action, a unique and little-understood asset class has been beaten down and left for dead.

And the media is working furiously to scare investors away with negative headlines. They are telling people that it is “game over.”

Except they are wrong. We’re looking at a classic market overreaction – the kind that leads to big investment gains.

I want my readers to capitalize on this temporary distortion.

At my Emergency Briefing, I will explain the situation that’s unfolding before us right now… and why the mainstream is wrong about it.

I’ll also show attendees how to take advantage of some exciting companies while they’re trading at a discount. And I’ll even give away a free recommendation on-air. Everyone who shows up tonight will get it.

It’s all going down at 8 p.m. ET. You can get all the details right here.

I strongly encourage you to join us. There’s a fantastic investment window open right now, but I’m sure it won’t stay open for long. Let’s take advantage of it.

Again, just go right here to reserve your spot. See you in a few hours.

Microsoft is back in the consumer AR game…

Microsoft just announced that it is ready to make a consumer version of its augmented reality (AR) headset, the HoloLens. This is something of a pivot from the company’s historical direction.

When we checked in on the HoloLens last month, Microsoft had just inked a $22 billion enterprise deal with the U.S. Army.

Per the deal, the Army will deploy 120,000 HoloLens headsets for training and potential use in the field. This is the largest deal in the burgeoning AR industry to date. 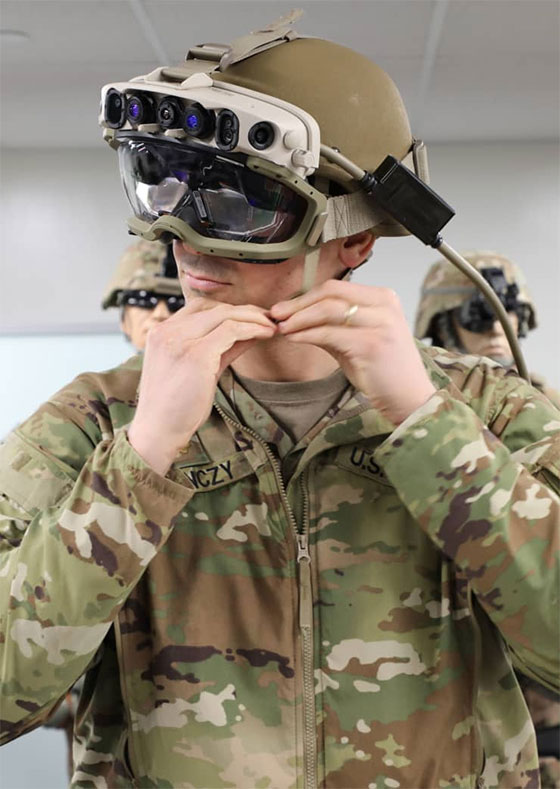 Of course, this deal reinforced Microsoft’s focus on enterprise applications for the HoloLens. Simply put, the headset is way too big and expensive for consumer adoption.

Now it turns out that Microsoft will invest the cash flow derived from the U.S. Army deal into developing a consumer version of the HoloLens.

Microsoft plans to produce a version of the HoloLens that will weigh 90 grams or less. For comparison, the fourth generation of Snap’s Spectacles that we talked about on Monday will weigh about 134 grams. That’s just over one-quarter of a pound.

We can see where the industry is going here. It sees the 100-gram threshold – give or take a few grams – as the weight limit needed for mass consumer adoption.

Microsoft didn’t say when the consumer version of the HoloLens will be ready. It’s just aiming to get back in the consumer game. I’m not surprised.

Players like Facebook, Google, Apple, Snap, Niantic, Samsung, and others are already racing after the next massive consumer electronics market. It was just too tempting for Microsoft to sit on the sidelines.

I would expect another update from Microsoft later in the year.

Most consumers don’t know this, but delivering YouTube videos to viewers across many different devices is a complex process. This is a major challenge for YouTube.

Think about this – users upload over 500 hours of video content to YouTube every single minute. It’s an unbelievable amount of video.

What’s more, many different devices record these videos. Some are recorded with a smartphone. Some with a laptop camera. And some YouTubers record with professional equipment.

These devices produce videos in different formats, which means YouTube needs to convert them all to a uniform format after they are uploaded.

And there’s yet another level of complexity here.

These devices can handle varying levels of video quality. For example, 4K monitors can view much higher-quality content than older devices.

And that means YouTube must transcode every uploaded video into several different video quality levels so that it can stream the appropriate one for each device.

And yes, that means YouTube knows what device you are watching videos from.

Obviously, this is a tedious and complex process that most people had no idea existed. If we have ever noticed poor performance or video quality when watching YouTube, it almost certainly resulted from the complexities involved in transcoding the video.

And this complex challenge is where the new VCU comes in.

YouTube’s VCUs are now improving the site’s capacity to transcode videos into more than a dozen versions – all in order to provide a smoother, sharper experience for anyone uploading or watching videos. They also use bandwidth more efficiently, which is a key factor in YouTube’s costs.

Bringing it all together, YouTube’s new hardware has led to 20–30x improvements in computing efficiency. The platform can now transcode videos faster and in higher quality than ever before.

And this will result in a better experience for users, especially those with older devices. So if you’ve noticed less buffering time lately, now you know the reason why…

This company is commercializing deepfake technology…

Veritone just released a platform called Marvel.ai. The purpose of this platform is to commercialize deepfake technology for useful purposes. This is interesting…

As a reminder, deepfakes are altered media content. They are fake videos or audio where artificial intelligence (AI) mimics a real person’s voice and/or image.

We have talked several times before about the nefarious side of deepfakes. With Marvel.ai, Veritone is creating a platform to harness the technology’s productive potential.

It all starts with synthesizing a person’s voice. (We talked about that yesterday with the work Facebook is doing.) To do this, the person simply needs to record themselves reading a series of different passages.

From there, Marvel.ai will enable influential people to authorize their voice to be used in deepfake videos or voiceovers. This could be done to create advertisements, endorse products, deliver public service announcements, create audiobooks, or provide voiceovers for animated content.

If we think about it, this technology could be extremely useful for executives, celebrities, sports stars, politicians, and other influencers.

For example, a celebrity could authorize the use of their voice in advertisements for a particular brand or product.

Or an ambitious politician could have speechwriters feed one speech after another to the AI to make it appear like they are doing good work in many different places.

I’m very curious to see if this will be a successful platform. Veritone is an odd company to be releasing this technology. It bills itself as an AI company, but the majority of its revenue actually comes from advertising and content licensing.

Aside from Veritone, here’s the key question… Would influencers be willing to sign over their voice and likeness for use in content they don’t have complete control over?

P.S. One last reminder… My Emergency Briefing is just hours away. Go right here to make sure you don’t miss out.