The headlines tell us that the broad S&P 500 index has soared over 35% over the last five months. That’s the largest five-month gain the index has seen since 1938. And it had its best August since 1986.

But when we look at the market year to date, we’re going to see something entirely different. 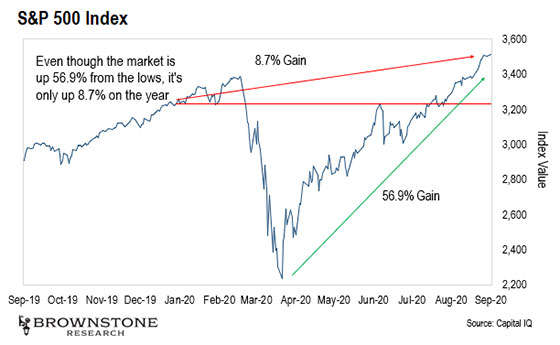 But I’m not interested in those kinds of gains for my subscribers. Why bother if we’re only going to beat the S&P 500 by a few basis points?

My Near Future Report, Exponential Tech Investor, and Early Stage Trader model portfolios will likely end up the year beating the S&P 500 index by a magnitude. That’s 10x better than the index returns. How is that possible?

The gap between the companies using the technologies that I write about every day in The Bleeding Edge and those that don’t has suddenly become wider than ever before.

The impressive gains from these well-positioned technology and biotechnology companies are responsible for essentially all of the gains in the stock markets right now.

And as I begin the process of preparing my subscribers for investing in 2021, this splintering dynamic in the market will become even more exacerbated.

The difference between winning and losing in the stock markets will depend entirely on which stocks are in our portfolios.

And if you want to find out which tech stocks will power the market going forward – and which toxic stocks shouldn’t be in your portfolio – make sure to go right here for a special presentation I’ve put together for investors.

A COVID-19 vaccine is coming sooner than most think…

We are going to start today with big news from Moderna on the COVID-19 front.

As a reminder, Moderna is one of the leaders in the race for a COVID-19 vaccine. Its vaccine is already in Phase 3 clinical trials.

What makes Moderna’s vaccine unique is that it uses messenger RNA (mRNA) to produce an immune response. This is a synthetic biology approach, which is on the cutting edge of biotechnology right now. Moderna actually created the vaccine in just a matter of weeks after sequencing the COVID-19 virus.

And Moderna just released data demonstrating that its COVID-19 vaccine is effective even in older adults. In fact, the vaccine created an immune response in people over 56 years old that was on par with the response observed in adults 18–55 years old.

We already knew that the vaccine was deemed safe and effective for producing the desired immune response in folks under 56 years old. The big question mark was whether it would work for older adults, who typically have weaker immune systems. These are the people who would benefit the most from a COVID-19 vaccine.

So the fact that Moderna’s vaccine is working well for the higher-risk segment of the population is a great sign. That sets the company up for a successful Phase 3 trial, which would likely lead to FDA approval.

And it is coming much faster than most people realize…

The FDA is likely to issue emergency use authorization (EUA) for the top COVID-19 vaccine(s) before the year is out. That will allow people with higher risk of serious illness to get a vaccination before it receives full-blown FDA approval.

Emergency use would likely apply to people at risk due to age and health concerns, medical workers, and people whose jobs require travel and constant exposure to new people.

The big question mark is how well the vaccine will work in fighting off the virus in those who are exposed to COVID-19.

That will take time and a lot more testing to discover.

And we also need to understand how long the vaccine lasts. Will it work for two months? Half a year? Or a full year? This is, of course, the purpose of having clinical trials to determine safety, efficacy, dosing levels, and frequency of dosing.

Regardless, the availability of an effective vaccine, even under an EUA, would be a big step toward getting the economy back on track and displaced people back to work… and returning to a semblance of normalcy after what’s been an absolutely ridiculous year.

Regular readers of The Bleeding Edge know that Apple is set to launch the 5G-enabled iPhone later this month. This is the event that will kick the 5G boom into high gear. And as a bonus, it turns out that Apple is bolstering the iPhone’s privacy ahead of the big launch.

Apple just released an early version of iOS 14, which will be an update to the iPhone’s operating system. I went through the update over the weekend, and one major change caught my eye.

With the iOS 14 update, Apple is requiring all apps to ask users if they are willing to share their data with the developer for advertising purposes. This will happen when at the time that we download an app.

Specifically, this change impacts how third-party companies use Facebook’s behavioral surveillance tracking technology to learn more about the end users – us.

If we say yes, the app will be able to collect all our behavioral data, just as many apps have done up to this point.

But if we say no, the software will stop that app from collecting our data. It’s a major blow for all those companies that have been secretly tracking us and using that information to generate revenues through personalized advertising.

Apple has been taking incremental steps to protect user data and improve the iPhone’s privacy, and this was the boldest step yet.

This is creating a stir in the industry because it will severely impede developers’ ability to target users with third-party ads. And gaming developers are the most worried about this.

Mobile gaming is immensely popular, especially on the iPhone. In fact, nearly 22% of all apps downloaded on iPhones are gaming apps. The next closest category is “business” apps, which account for only 10% of all downloads. It’s a big gap.

And mobile games generated $33.5 billion in sales on the iPhone last year, largely from third-party ads and in-game sales.

Naturally, Apple’s latest move will dramatically impact those advertising revenues. However, it won’t negatively impact Facebook that much at all. After all, iPhones make up only 12–13% of worldwide smartphones, and this third-party tracking functionality represents a tiny part of Facebook’s overall revenue.

And there is one more layer to this story…

Apple has been investing heavily in its own subscription-based gaming platform. The beauty of the subscription model is that customers pay a set price monthly or yearly for access to a bunch of games.

So by making it more difficult for gaming developers to target consumers with ads for their products, Apple is subtly pushing more business toward its own gaming platform. It’s a masterful move.

Normally something like this would bring regulatory risk. Companies can’t explicitly reduce consumer choice to push their own products.

In this case, however, Apple is genuinely protecting consumer data, creating a clear option for a consumer to opt-in or opt-out, and enhancing consumer privacy at the same time. It would be hard to argue that this is detrimental to consumers.

To me, this is great for Apple’s business and its consumers. I like the change.

And this makes me even more excited for the upcoming 5G-enabled iPhone launch. Typically, Apple’s annual new product event happens in the first third of September. Last year, it was on September 10. I suspect the date will be announced within the next week or two.

This is certainly one of the biggest tech events of the entire year.

We are witnessing a multiyear boom in artificial intelligence…

As regular readers know, I believe that the rise of artificial intelligence (AI) and machine learning (ML) will bring us some of the best investment opportunities of our lifetimes. These technologies are remaking the world as we speak. They are killing scarcity and creating a golden age of abundance right before our eyes.

The next 30 years are going to bring us such incredible tech developments that we will hardly recognize the world we find ourselves in. It’s going to be an amazing journey.

A new report from International Data Corporation shows that companies will spend around $50 billion developing and implementing AI and ML this year. And this spending is going to more than double over the next four years, hitting $110.7 billion annually in 2024.

This will be a major boon for the software companies developing AI technology. And this advanced AI software will drive major demand for next-generation hardware as well. The world is going to need more servers, more processing power, and more application-specific semiconductors designed for AI.

My longtime readers know I target technologies on the verge of exponential growth. The below chart gives us a good idea of what I mean. 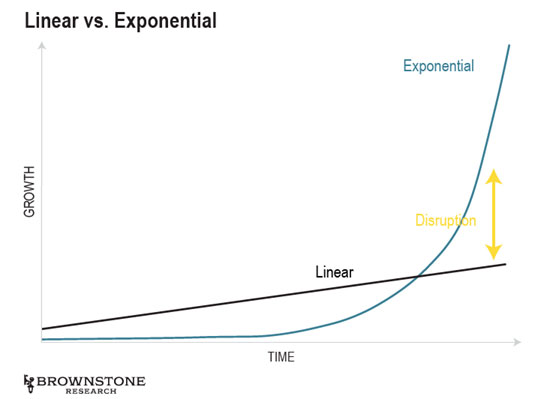 Exponential growth sneaks up on us. It appears gradual at first. Then one day, growth hits an inflection point, that sharp elbow we see in the blue line. Then… boom. The trend goes vertical.

Artificial intelligence is at that “elbow” right now. In fact, the inflection point happened last year.

And this will lead to a multiyear boom that will overflow with incredible investment opportunities. AI and ML will continue to be a major focus in The Bleeding Edge as I look into 2021.