Yesterday in The Bleeding Edge, we had a look at the major cost drivers behind producing a gallon of gasoline. As we saw, 59% of the cost comes from the price of crude oil, and 26% comes from the cost of refining the crude into gasoline.

When the U.S. lost its status as a net exporter of petroleum this year, naturally that negatively impacted the price of gasoline. Coupled with the Federal Reserve printing $5 trillion (massive inflation and decline in the purchasing power of the dollar), we have a real problem with gasoline and diesel prices.

While it is going to be extremely difficult to address the irresponsible monetary and fiscal policy that we have experienced, at least the price of crude oil and natural gas can be partially addressed by increasing domestic production.

But what about the second-largest component of the price of a gallon of gas – refining? I’m afraid I don’t have good news.

After all, if the U.S. doesn’t have enough refining capacity, it will have to purchase refined product at higher prices from other countries, and that means higher gasoline prices.

This may come as a surprise, but U.S. crude oil refining capacity (the ability to produce gasoline) has been on the decline since March of 2020. It had been on the rise since late 2012, but when the pandemic lockdowns hit in the spring of 2020, naturally, demand collapsed as a large part of the population stayed home:

Had this been temporary, that wouldn’t have been a problem. But by 2021, economic policy became antagonistic, with the oil and gas industry causing great reluctance for the private sector to invest into restoring refining capacity.

And this was the result:

Yes, this means higher prices at the pump, but it also means much bigger problems. Inventory of diesel is at all-time lows and there are imminent shortages expected, particularly in the northeast: 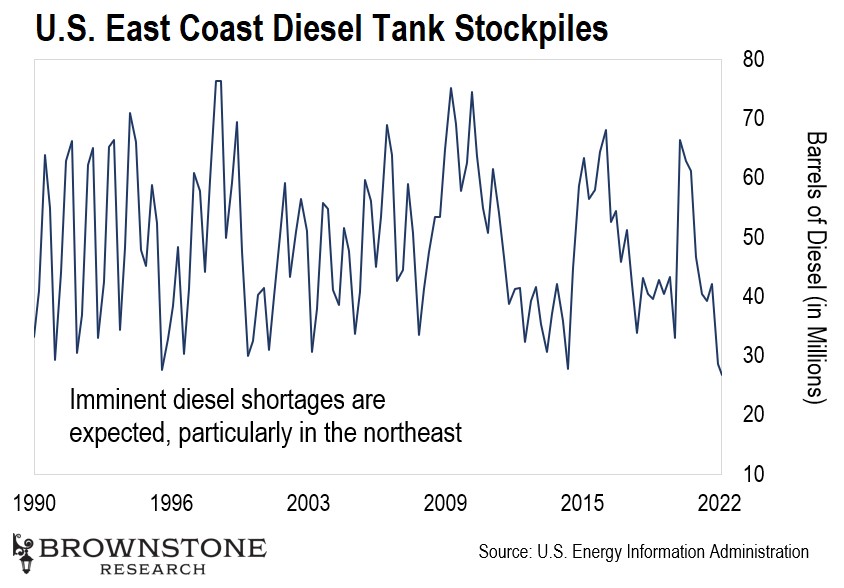 Aside from the reduction in refining capacity that we looked at earlier, the northeast has been particularly hostile towards refining plants, which has resulted in many closures over the last decade.

The reality is that large trucks run on diesel fuel. And if there is a shortage of that fuel, goods and services will experience both an increase in price and major delays in distribution.

We’re in for a tough summer. We can expect higher prices, shipment delays, and product shortages into the fall.

Is there any good news? Yes, I think there is. This is a wake-up call.

Most can clearly see that there is a need to build more resilience into supply chains. This is just as true for energy as it is for pharmaceuticals, baby formula, or semiconductors. And these problems make it very easy to see why having domestic production and secure supply chains is so critically important.

Hopefully, this newfound awareness will affect positive change in the months ahead.

Nuclear energy is going to the Moon…

Yesterday, we had a look at an exciting new approach to nuclear fusion on Earth. Today, we will discuss the prospects of nuclear fission on the Moon.

Yes, the future of a presence on the Moon is getting real…

The big news is that NASA just awarded contracts to three companies to design nuclear fission power systems for the Moon. Those companies are Lockheed Martin, Westinghouse, and IX.

Lockheed Martin and Westinghouse are both large legacy incumbents. And each company plans to partner with a few others on its nuclear fission system design.

More exciting to me is IX. This company came about as a joint venture between Intuitive Machines and X Energy – two early stage companies. I suspect we’ll see the most innovative solution come out of this partnership.

Regardless, I’ll be closely tracking the progress these three companies make on their respective nuclear fission systems. I can’t wait to see the final designs.

And bigger picture, this is a clear indication that NASA is finally getting serious about establishing a permanent presence on the lunar surface. That will require a stable and constant power source – and nuclear fission makes the most sense.

I know some will advocate for the use of solar energy in space instead. I love the idea, but the fact is, it’s just not practical. It would take literally tons and tons of solar panels to generate the power necessary for a permanent base. And getting massive payloads into orbit and down to the moon is no easy (or cheap) task.

Nuclear fission is just a far more efficient solution. It would cost a fraction of the price, be deliverable in one spaceflight, and be far easier to install.

And as a source of energy, nuclear fission would be more capable of base load power generation, the kind that is needed to fuel a base and support things like life support systems.

It’s one thing to go for a visit and return. In that case, we can take our energy with us and simply return with less. But to go – and stay – we need something more. This kind of power generation could enable humankind to become a multi-planetary species for the first time in history…

As we have discussed before, one of Amazon’s most important acquisitions was Kiva Systems back in 2012. Kiva became the foundation of Amazon’s own robotics division, and now Amazon has deployed more than 350,000 industrial robots across its warehouses and fulfillment centers.

Of course, the early generation of robots was somewhat limited. They still required a lot of human assistance and programming… not much intelligence. But that’s all changing.

Proteus is a fully autonomous robot that can pick up and move carts of products and packages with ease.

Here’s a look at the robot in action:

Here we can see Proteus position itself under the wheeled cart, lift it, and cart it to a new location in the warehouse.

And we can see green and red lights flashing as it moves. Those are lasers that can identify any objects in the robot’s path. They prevent the robot from running into anything, and they allow Proteus to stop immediately if a human steps in front of it.

So this is an incredibly functional robot. And Amazon is pairing it with an AI-powered robotic arm called Cardinal.

Cardinal uses computer vision to identify specific packages. Then it can lift them out of these carts and place them on the shelf for storage, or on the truck for delivery.

Put the two together, and we have robots that can take care of most of Amazon’s fulfillment work autonomously. That’s critical.

As we know, the biggest problem Amazon faces right now is a labor shortage in its fulfillment centers. This is tiring, monotonous work that is not very interesting to most people.

And the labor shortage hit just as e-commerce demand skyrocketed thanks to the COVID-19 pandemic policies… and they’re still impacting the company today due to the “Great Resignation.”

So fully autonomous robots are Amazon’s solution. These developments are being driven out of necessity. And they will result in a shift across the industry.

In order to remain competitive, any distribution and fulfillment facility will need to adopt this kind of technology.

This is a pivotal moment in history for the space economy…

We’ll wrap up today with a major development within the burgeoning space-based economy.

The very first sale of a product manufactured in space just took place. This is the start of what will become a huge trend over the next couple of decades.

Redwire Corporation is a company that’s been building out the capacity to manufacture a lot of different products in space. In fact, the company has a dozen payloads sitting aboard the International Space Station (ISS) right now.

And in what will go down as a pivotal point in history, Redwire just sold a special potassium dihydrogen phosphate (KDP) crystal to Ohio State University. This is a crystal that can be used to make lasers for quantum computers or medical equipment.

Ohio State purchased two grams of this crystal for $4,000. For perspective, that puts the price at $2 million per kilogram (kg).

As for the logistics, Redwire shipped the crystal back to Earth on a SpaceX Crew Dragon module. Then it sent the package the rest of the way via FedEx.

And the reason the university was interested in this space-based crystal is simple. It’s purer than crystals produced here on Earth. In fact, it’s almost completely pure. Manufacturing crystalline structures in space, without gravity, enables crystal growth that is largely free of any defects.

Ohio State wants to run some tests to see how this high-quality crystal compares to crystals produced here on Earth for various applications.

So this is an exciting moment in time. Manufactured in small volumes, Redwire’s space crystals will result in superior performance for applications in quantum computing, fiber optics, surgical equipment, and other exciting applications.

Companies developing quantum computers will want to get their hands on these KDP crystals. And all of the banks and hedge funds on Wall Street – which depend on ultra-fast fiber optics to place high-frequency trades in the equity markets – will also be scrambling to secure their own supply of manufactured-in-space fiber optic cables.

Redwire could be looking at a nine-figure annual business almost overnight here. And if that happens, we’ll see plenty of other companies spin up, with the intent to claim their own market share within this space-based economy.

Thanks to SpaceX’s revolutionary approach to both rocket propulsion and reusability, the cost of launching payloads to orbit – and returning them to Earth – has dramatically fallen. This is the key enabler to our burgeoning space economy.