What the heck are we going to do about the sky-high price of gasoline?

I know that everyone is feeling it right now… It’s one of the most pressing questions in the current economic environment. And no, a three-month holiday on the federal gasoline tax won’t solve the problem.

Here’s how the costs of gasoline (& diesel) break down: 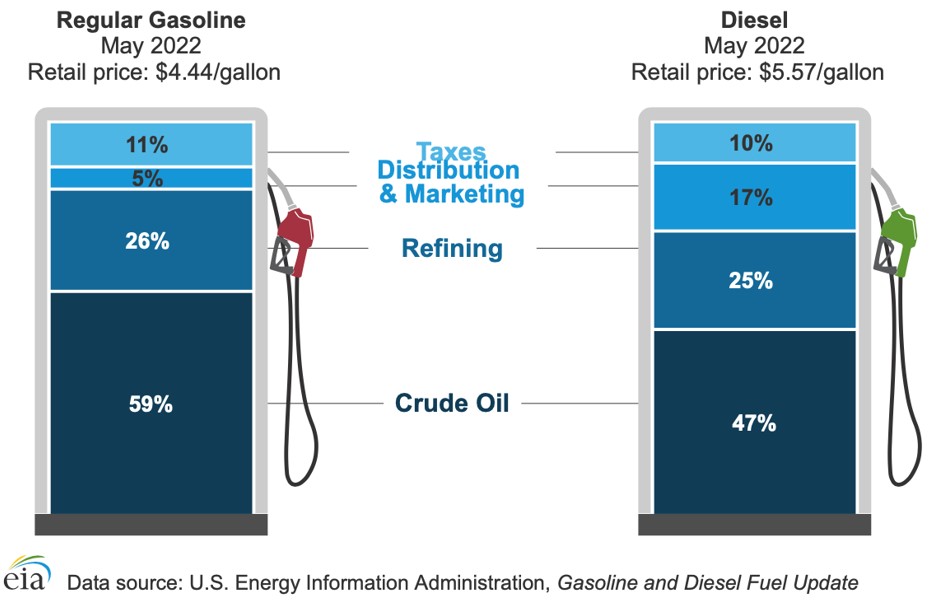 As we can see above, taxes make up only 11% of the total price of a gallon of gasoline. And the federal gas tax is just 18.4 cents. For a 25-gallon tank, that amounts to a mere $4.60 savings. That’s enough to buy us a cup of coffee.

So no, that’s not going to solve the problem.

About 85% of the costs are associated with the cost of crude oil and the refining of that oil into gasoline.

Looking back, 2020 was a pivot year. Due to U.S. domestic policies to increase oil and gas production, it was the first year that the U.S. became a net exporter of petroleum since 1949. The positive effects of domestic production could be seen in low gasoline, diesel, and even natural gas prices (thus electricity) nationwide.

This is deeply unfortunate, and directly impacts the cost to fill up our cars and trucks. And it even increases the costs of goods and services, as delivery costs rise due to increased costs of diesel.

Further, rising prices of natural gas, propane, and heating oil dramatically increase the cost of electricity, and in some parts of the country, the cost to heat our homes in the winter.

Without a clear, consistent policy that incentivizes investment for domestic oil and gas production, we’ll continue to suffer with higher prices.

And as we read yesterday in The Bleeding Edge, less domestic production of oil and natural gas doesn’t lead to cleaner environmental policy. The reduced production of cleaner fuels, like natural gas, has only resulted in a spike in the use of the dirtiest form of carbon of them all – coal.

Tomorrow, we’ll take an interesting look at the other major cost of producing gasoline and diesel – refining. For reasons I’ll explain, it has become a much larger problem than we might think.

The most exciting approach to nuclear fusion yet…

Let’s stick to the topic of energy. But instead of oil and gas, let’s look at another great development in the nuclear fusion space. This one comes from a company called Zap Energy.

We haven’t talked about Zap Energy yet, but I have had my eye on it for years. This startup is pursuing a unique approach to nuclear fusion, called a “sheared flow stabilized Z-pinch.” We’ll call it a Z-pinch for short.

This sounds very technical, but it’s not hard to understand. The Z-pinch approach basically creates lightning in a bottle.

Here we can see the Z-pinch method, simplified, in all its brilliance. The team sends a stream of plasma down through a vacuum chamber. The plasma is then electrified in the chamber.

The chamber has a magnetic field that contains the fusion reaction. And under the right conditions, fusion takes place, and neutrons carrying energy are released.

As we can see, it’s a really cool (actually hot) system. And best of all, this approach doesn’t require much energy to get the fusion reaction going.

For context, the tokamak fusion reactors we have discussed before require an immense amount of energy to get up and running. We’re talking about enough energy to power hundreds of thousands of homes.

That’s OK if the reactor is a net energy producer, but it also means that there needs to be a separate source of massive electricity – hundreds of megawatts (MW) – in order to get the reaction started.

This is critical to enable a more distributed and resilient power generation architecture, rather than relying on massive multi-billion dollar/Euro projects like ITER in Europe.

I have been following Zap’s progress for the last few years and found it quite interesting, but I hadn’t gotten too excited about the company and its Z-pinch approach up to this point, simply because Zap hadn’t attracted much in investment capital.

In fact, Zap Energy’s Series B round last year only raised $27.5 million. Clearly, the venture capitalists (VCs) were still not fully committed to this technological approach.

But that’s all changed.

Zap Energy just raised $270.4 million in its Series C round last week. This tells us that Zap is onto something. Early stage companies don’t 10X their funding rounds in a year’s time unless they demonstrate some remarkable breakthroughs.

So this is absolutely a company that we need to be tracking very closely going forward.

Zap Energy could become a major player in the race to develop compact nuclear fusion technology. And it gives the industry another promising approach to solving the grand challenge of clean, inexpensive energy, capable of providing base load electricity requirements for both residential and commercial applications.

And to top it all off, we have war in Eastern Europe that all but guarantees energy and food shortages in the second half of the year.

In uncertain times like this, it’s easy to let fear and emotion drive us. But it’s important to stay rational and logical about the state of the global economy. And to me, that means following the data.

As regular readers know, one of the “macro” barometers I look at when assessing economic conditions is global semiconductor demand. High semiconductor demand is a great indication that demand for electronics – both consumer and enterprise products – is also strong. That’s one signal that points to strong economic activity.

And as we discussed back in March, global semiconductor demand remains elevated despite the chaos unfolding around us. In fact, Sumco – one of the world’s leading producers of silicon wafers for semiconductor production – announced that it has already booked orders for its entire production of 300 mm wafers through 2026.

That means Sumco simply can’t produce enough wafers to meet current demand. It has customers lined up and waiting until 2026 to get the wafers they need. As I mentioned at the time, that was a great sign of economic growth. And the story gets even better…

Taiwan-based Global Wafers, another leading producer of silicon wafers, just announced that it has orders booked all the way out to 2028. Again, that means the company simply can’t make enough wafers to keep up with semiconductor demand.

I’ve never seen a company with six full years of advanced business already locked up. Talk about a vibrant market.

Global Wafers did announce that demand for consumer electronics like smartphones, tablets, and laptops has lessened a little bit. That’s not surprising considering that the high costs of food, fuel, and electricity have eaten into discretionary income. But those small semiconductor declines have been more than offset by rising demand from the auto industry and other industrial applications.

The big takeaway here is that global demand for semiconductors remains elevated at extraordinary levels… levels measured in years. This suggests that the global economy is still going strong, despite everything else going on around us.

So I remain optimistic that the current bout of market volatility will be relatively short-lived.

If semiconductor and silicon wafer demand was tanking, then I’d be a lot more nervous. But as it stands, I continue to expect a strong bounce back in the second half of this year. July is right around the corner…

A shrewd move in the 5G space…

We talked last month about how the major wireless operators continue to buy up spectrum to build out nationwide fifth-generation (5G) wireless networks.

Of course, Verizon Wireless, AT&T, and T-Mobile have led the way in 5G spectrum purchases. But a fourth player has also been gobbling up spectrum: Dish Network.

This was a little odd because Dish Network is a satellite-based multichannel pay-TV company. It’s not a wireless operator.

What’s more, the Federal Communications Commission (FCC) requires the companies who purchase spectrum to put it in use within a reasonable period of time. This prevents companies from simply squatting on spectrum in hopes of selling it for a higher price down the road. The FCC’s requirement ensures that companies use the spectrum to build out a wireless network.

So the industry was wondering what Dish Network was up to here. Why was it buying up 5G spectrum? Was it going to become America’s fourth major wireless operator?

My answer has always been “no chance.” I’ve long maintained that Dish Network wasn’t really serious about building a nationwide 5G network.

Dish Network did in fact build out its own 5G network in a few cities to satisfy the FCC’s mandate. But the company has no plans to go any further. This deal with T-Mobile will give its own customers access to nationwide 5G… but Dish won’t build or maintain those networks.

So this is really just a shrewd move by Dish to effectively squat on its spectrum, while doing the minimum amount of work required to maintain a 5G wireless operation – which now primarily leverages T-Mobile’s nationwide network.

In a few years, I predict that we’ll see Dish Network sell its networks and all of its spectrum to one of the three major wireless companies at a multi-billion profit. When it’s all said and done, I think Dish will pocket a few billion dollars on this. And I suspect T-Mobile will get the first crack at acquiring Dish’s spectrum.

And while the press release might read “T-Mobile Acquires Dish Network’s Wireless Operations for $X.X Billion,” make no mistake about it, it will be a spectrum sale.

The executives at Dish are smart operators with a multi-year time horizon. They’re willing to play the long game, and I respect that. However it plays out, this is one of those “inside baseball” stories within the broadcasting and wireless industry… and it’ll be fun to watch.