At the start of 2021, we experienced one of the most incredible market moments that I’ve ever seen in my 35 years as an investor.

Here it is in one chart: 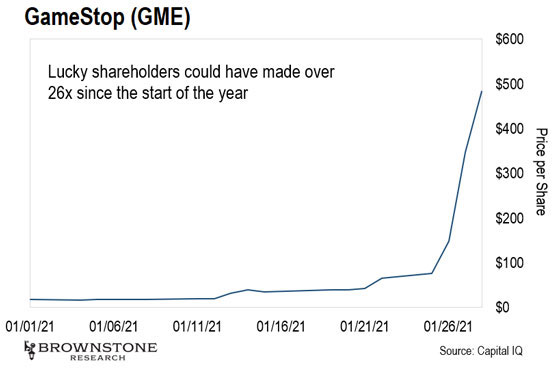 I’m sure we all know the story by now. But for readers who need a refresher, here’s the gist…

GameStop is the video game equivalent of Radio Shack for electronics or Blockbuster for movie rentals. The company has been floundering as video games are mostly downloaded online or purchased on Amazon these days.

But in late January, the stock jumped over 26x over the course of days.

How did this happen?

Day traders on a forum called WallStreetBets, which exists on the Reddit social media platform, noticed a massive “short” position had been taken by hedge funds in GameStop.

That means the hedge funds had borrowed GameStop shares and sold them, intending to rebuy the shares at a lower price. They’d then return the shares to the lender, keeping the difference in price as profit.

But shorting can be very costly if the stock price rises instead of falls. The hedge funds would have to buy back the shares at a higher price than they were sold.

The Redditors on the WallStreetBets forum figured out that if enough people got together and bought GameStop, they could raise the price and “squeeze” the hedge funds out of their positions.

And that’s exactly what happened.

GameStop traded around $17.90 a share on the first trading day of the year. At its peak on January 28, it traded as high as $483 a share. For those who got lucky and bought at the right time, that was a more than 26x return within a month.

This had nothing to do with fundamentals, analysis, or the underlying assets of GameStop. Normal investors figured that they could beat Wall Street at its own game… and they did.

The Dark Side of Short Selling

And the Securities and Exchange Commission (SEC) noted that it was investigating the situation. Many hedge funds claimed the activity was market manipulation.

This really made me laugh…

Why? Because the hedge funds had shorted more than 100% of GameStop’s available float (the number of shares available for trading), setting up the situation for the Redditors.

How is it possible to sell more shares than exist? Technically, it’s not. Short selling requires the short seller to borrow shares from someone.

But “naked” short selling is something that bad actors on Wall Street have done for years to fleece normal investors. By selling short shares that don’t exist, they drive down the share price, forcing retail investors to sell out their positions.

Then the short sellers buy back the stock for pennies on the dollar at a great profit. It is nothing but market manipulation. And it transfers wealth from normal investors to Wall Street.

It should be impossible. Sadly, it is not.

But that’s why the hedge funds’ claims of market manipulation by retail investors are so absurd. I guess from Wall Street’s perspective, it isn’t fair for retail investors to screw up a perfectly good naked short sell.

And just how bad did it get?

Two other hedge funds had to step up with $2.75 billion in capital to save Melvin Capital from collapsing.

And, of course, the hedge funds are crying foul due to the sting of losing billions. But the real focus should be on the hedge fund activity and naked short selling.

As the GameStop incident shows, retail investors are joining together. They’re sharing investment ideas and beating hedge funds at their own game.

Or, at least, they’re trying to. But the rabbit hole goes down even further…

All the buying and selling activity on GameStop caught online brokerage Robinhood way off guard.

What happened next is hard to believe.

There was so much activity around GameStop that Robinhood could no longer meet its capital requirements from a regulatory perspective. It had to quickly raise additional private capital to shore up its balance sheet and avoid getting into trouble.

It drew down on credit lines of $500–600 million and raised more than $1 billion in emergency funding… just hours after stating that it had no liquidity problem.

Days later, it raised another $2.4 billion from its shareholders, for a total of $3.4 billion raised in less than a week. For perspective, Robinhood only raised $2.1 billion from its founding in 2013 until its Series G round last September.

And then Robinhood took even more drastic measures. To stop its increasingly large capital requirements from growing even larger, Robinhood suspended trading on GameStop.

Not only that, but Robinhood actually started selling its users’ positions. Many traders using Robinhood reported having their shares sold without their permission.

As of February 5, Robinhood has lifted its trading restrictions on GameStop, but the damage is already done. And retail investors lost more than $1 billion in profits as a result.

And Then Google Steps In…

Rightfully so, Robinhood’s users have been fleeing the online stock trading platform in droves. And they have been vocal about it.

Nearly 100,000 one-star ratings for the Robinhood app appeared on the Google Play app store in the hours following Robinhood’s shenanigans.

But then Google began to systematically remove negative reviews of Robinhood.

Suddenly, as if nothing happened at all, Robinhood was back at a four-star rating on the Google Play store.

It’s insane… except not when we think about who is involved.

Some of the most powerful venture capital firms in Silicon Valley are backers of Robinhood. In fact, one of them is CapitalG – formerly known as Google Capital. And GV – aka Google Ventures – is another.

In short, Google has a big financial interest in Robinhood’s success. By my calculations, Google’s total stake in Robinhood will be worth more than $1 billion on a successful initial public offering (IPO).

And, of course, Robinhood had been planning to go public this spring. Now its investors – who just had to pony up $3.4 billion to help Robinhood avoid its liquidity crisis – will insist on an IPO in the coming months in order to get their money back… quickly.

I predict Robinhood and its backers will try to dump shares on unsuspecting retail investors at an inflated valuation. They’ll take billions in profits off the table and call it a day, leaving regular investors holding the bag.

But I certainly won’t be one of them.

A Rigged Game for Retail Investors

What this entire debacle shows is that it’s extremely difficult for retail investors to win. Wall Street has rigged the game against us.

As an angel investor with a Silicon Valley network, I’ve watched this kind of situation play out numerous times over the years. For far too long, institutional investors, venture capitalists, and private equity firms have taken all the best profits and left retail investors with the scraps.

And as we’ve seen in the GameStop scenario, the moment regular investors band together and start to get ahead… Wall Street cries foul.

Now retail investors are finally waking up to that fact.

And I want to help them beat Wall Street at its own game.

So far, I’ve had great success. My research services have outperformed the market indexes and hedge funds by a wide margin each year.

But my mission to rebalance the scales isn’t finished…

I want to invite readers to attend my Investment Accelerator event tonight at 8 p.m. There, I’ll be sharing one of the most important predictions of my career…

Not only that… I’ll bring attendees an investment opportunity so big, it could put you on the path to sharing $1 billion of tech stock profits.

It’s going to be a jam-packed night. So make sure to go right here to reserve your spot for free.

And remember, it all starts tonight at 8 p.m. ET sharp. I look forward to seeing you there.