The data continues to roll in from serological testing around the world for COVID-19. Serological tests determine the prevalence of COVID-19 throughout a population. Specifically, it determines how many people have already had COVID-19 and have antibodies in their systems.

On Monday, we reviewed the results from Santa Clara County, California, which is in the San Francisco Bay Area. Today, we’re going to have a look at the test results out of Los Angeles County.

These results are directly from the Los Angeles County Department of Public Health, and the testing was performed in partnership with the University of Southern California (USC).

In other words, the serological test puts the estimated number of cases somewhere between 14 and 29 times higher than confirmed cases.

The research that the Department of Public Health and USC performed provides us with data to calculate an actual estimate of the current case fatality rate. And just like the research from Stanford Medical School for Santa Clara County, the data demonstrate that COVID-19 has spread far more widely than the “experts” ever predicted.

We can think of 0.26% as an upper bound, the worst-case scenario. The reality is that the rate is likely much lower. The more testing that we perform, the more we realize that COVID-19 has spread further than was estimated.

This data is remarkably positive, and we have more to look forward to. On Monday, New York began serological testing. It is picking a large sample size of at least 3,000 people to run the serological test.

Given the population density of the New York metropolitan area, I believe we’ll see that COVID-19 has spread even further there than in other areas of the country.

Serological tests are critical to understanding the virus. The number of confirmed cases is irrelevant in estimating a case fatality rate for a virus like COVID-19.

We must understand how many people in total have contracted the virus. Then we will have a far more accurate understanding of how “deadly” a virus really is.

The more we test, the further the case fatality rates will drop. The more data we have that reveals the actual situation, the sooner our economies can open up around the world.

A proper hydroxychloroquine study is coming…

The big COVID-19 news today is that Novartis is going to conduct a proper clinical trial of the malaria drug hydroxychloroquine.

It will be a double-blind placebo study with 450 patients participating. This means that neither the doctors nor the patients will know which therapy is being given to each patient.

I, for one, am excited about this.

There’s been so much silly coverage in the mainstream media about this drug, even though it has been around for more than 50 years.

And we already have data from a smaller French study showing that hydroxychloroquine combined with azithromycin can successfully combat COVID-19 in just five days. We talked about that last month.

Granted, that wasn’t a double-blind placebo study. That’s why the data isn’t considered definitive. That’s where Novartis’s trial comes in. Novartis is going to do this right and end the questions surrounding hydroxychloroquine.

The key is the patients won’t know which cohort they are in.

And what’s great about this is that we’ll likely have trial results within 14 days. Either the treatments demonstrate a positive impact compared to the placebo within a week or two… or they don’t. That’s it.

I applaud Novartis for taking the time to conduct this trial. These drugs have already been proven safe when properly prescribed, and they are relatively inexpensive.

If the studies show that this treatment isn’t effective, then the world can move on to finding other therapies.

But if the clinical studies show that this works, it would be easy to scale up production and get the drugs out to medical facilities around the world.

Worth noting, though, is that this kind of therapeutic regimen isn’t a “cure.” It’s not a vaccine. Vaccine development will continue through next year.

And it is highly unlikely that we will have an approved vaccine before COVID-19 exhausts itself or mutates again into a weaker virus – which is typically what happens with coronaviruses.

A sign that the U.S. and Chinese economies are distancing from one another…

The U.S. and China are going to dramatically reduce their economic reliance on one another as a result of the COVID-19 pandemic. Here’s how I know…

Alibaba just announced that it is investing $28 billion into its own IT infrastructure over the next three years. This is a company that’s much like Amazon. It has a popular e-commerce platform as well as a big cloud services division.

And the cloud services division is where the company will focus the $28 billion. The goal is to replace U.S. technology with Chinese-made products.

And that hits on a big point that few people understand…

Semiconductors designed in the U.S. and manufactured in Singapore or Taiwan (or sometimes in mainland China) power top Chinese technology companies like Huawei and Alibaba. In other words, U.S. tech has been key to China’s technological advances over the last two decades.

But now, Alibaba is going to start manufacturing its own semiconductors, servers, and software. The company is trying to move away from U.S. technology and will instead design everything in-house.

And that shows us that China is preparing to distance itself from the U.S. It is finally addressing its decades-old competitive weakness. This isn’t something that will happen overnight, but it is a trend that will unfold over this decade.

And as for the U.S., I predict America will finally modernize its dated infrastructure and then repatriate much of its manufacturing base. We’ll see a decentralized manufacturing model where smaller, highly automated manufacturing plants will be located closer to the markets they serve.

As my readers know, this is part of a “new world order” I see coming when the dust settles on COVID-19. There were simply too many hard lessons learned during this crisis.

This is an area that I’ve been researching extensively, and it will be a big focus of mine for the next few years.

We have all been working for Google without knowing it…

I’m sure most readers have used reCAPTCHA before. This is the tool that makes us perform a task to prove we aren’t a bot before we can sign in to certain accounts. Here’s a visual of one that wants us to click squares and identify specific objects: 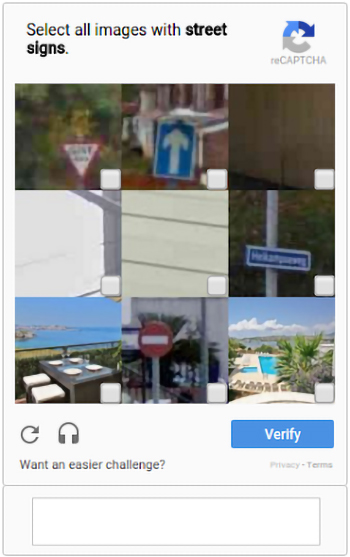 Well, Google acquired reCAPTCHA back in 2009, and it has been up to something behind the curtain ever since.

I wouldn’t blame anyone for not understanding the real story behind reCAPTCHA. At face value, we can intuit why a website wants to confirm the person logging in is “real” and not a software bot trying to infiltrate the website and steal information.

reCAPTCHA is actually a business. Companies needed help to classify images like street signs, crosswalks, traffic lights, bikes, and so forth. And while artificial intelligence (AI) can classify most items, there is always a certain percentage of images that are difficult to read. And that’s where we, the consumer, come in.

I’m sure you’ve all noticed that the images are often at odd angles, have strange cropping, or have grainy resolution. We, the humans, get the “difficult” images to classify. Those images can then train an AI.

That’s right. We have all been working for free in the guise of logging in to a website securely.

Companies pay reCAPTCHA to help classify the images that AI can’t. We work for free, but reCAPTCHA gets paid. We have been working for Google for years now without knowing it.

The service evolved over the last few years to help Google improve its AI for self-driving cars. It was a clever way for Google to get free labor for what would otherwise be an expensive and time-consuming problem to solve.

We were all crowdsourced to help Google improve its self-driving technology… That’s why many of the images are related to street/highway views.

Of course, we have come to expect this type of behavior from Google. Fortunately, a major cybersecurity company is taking a stand and ditching reCAPTCHA for a competing service. We’ll talk about that tomorrow…