Well, we’re not exactly sure yet. But we’re closer than we’ve ever been to finding out…

The Perseverance rover, which landed on Mars in February 2021, has already had a spectacular mission. A few days back, I wrote about the success Perseverance had with one of its instruments – MOXIE – which successfully generated oxygen from Mars’ carbon dioxide laden atmosphere.

The experiment was a great success and can be duplicated at far greater scale – enough to potentially support a human outpost on the red planet. Perseverance also saw success with its small rotorcraft designed to operate in the thin Martian atmosphere.

It’s the first time this type of aircraft has been flown on another planet. But the main event for Perseverance is much more exciting – the search for extraterrestrial life.

The choice to land in the Jezero Crater on Mars wasn’t random. It’s home to a large dry river delta, which is a perfect place to look for organic matter.

And that’s exactly what Perseverance has found. The rover has discovered an abundance of organic material that contains carbon. And where there’s carbon and water (previously), there could have been early forms of life.

Perseverance has discovered complex organic molecules, clays, and sulphate minerals which are a byproduct of when water interacts with rocks. This is exactly what was hoped for.

And as Perseverance continues with its mission, it is finding a larger prevalence of this matter. And with that, a higher chance of discovering biosignatures of life.

Sadly, we shouldn’t expect anything as dramatic as a Martian, or a five-eyed creepy crawly slithering in front of the rover. But there’s a very good chance to discover evidence of past forms of life – or who knows – a highly resilient bacteria capable of surviving the harsh Martian environment isn’t entirely out of the question.

Perseverance is also unique in that it’s collecting its samples in its search for life. It’s basically building a cache that it will deposit at a specific location on Mars. It will collect as many as 30 samples and seal them in tubes to be stored in a storage rack.

And years later, on a yet to be determined mission, they’ll be ready for collection and ultimately return to Earth for further analysis.

I wonder what, or who, will get to Mars and collect the samples first?

The tech giant is spinning out a secret group within its research division into a company called Aalyria. The team’s focus is on improving internet access through satellite laser communications.

Before spinning out Aalyria, Google codenamed the project “Minkowski,” a reference to German mathematician Hermann Minkowski.

And Google claims it has created a hyper-fast, ultra-secure communications system that can provide internet access on land, at sea, in the atmosphere, and even in deep space.

The technology centers on a form of laser communication referred to as “tightbeam.” According to Google, this tech is “on an exponentially greater scale and speed than anything that exists today.”

That said, Google hasn’t released many details. So we don’t know a lot about it yet.

What we do know is that Google’s whacky atmospheric balloon project, Loon, tested a complex form of laser communications. It’s likely that at least part of that research was rolled up into Aalyria.

And the fact that Google is putting out this announcement without much supporting information is telling. Clearly, the timing is not a coincidence.

Google’s aim with Aalyria sounds a lot like what SpaceX is doing with Starlink. And as we discussed a few weeks ago, Starlink is making great progress in its efforts to provide internet connectivity to consumers in remote areas.

Could Google’s goal be to develop a competing space-based internet backhaul network to compete with Starlink? Is its ambition to become an interplanetary internet and search giant?

Entirely possible. But we’ll need more details to be sure.

What does Aalyria’s satellite constellation look like? How does its laser communications system operate? And which end markets will Aalyria target?

The company did open with an $8.7 million contract from U.S. Defense Innovation Unit. That could indicate a focus on enterprise and defense applications.

Perhaps it is positioning itself to be tightly collaborative with the U.S. government as an alternative to the largely independent and commercially focused Starlink.

I’m sure this will be an ongoing topic that we’ll enjoy in The Bleeding Edge.

The first solar electric vehicles (SEVs) will soon be available…

An early-stage company called Aptera Motors just revealed its latest solar electric vehicle (SEV). This is a brand-new vehicle category that is starting to garner interest within the industry. 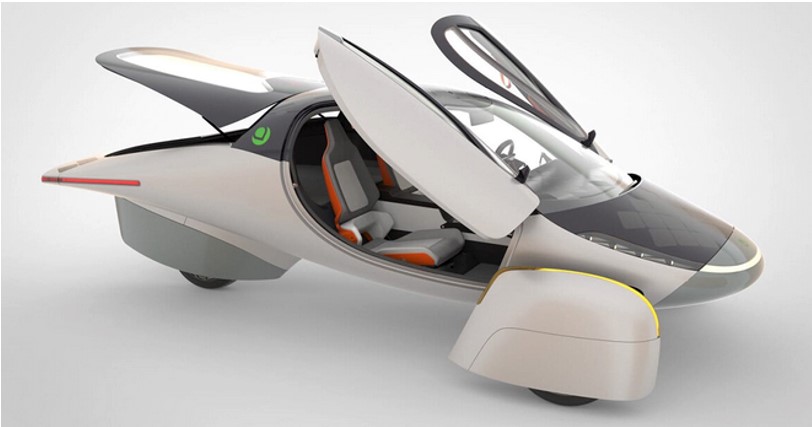 As we can see, this is a very unique car. It almost looks like a small aircraft. It’s small and lightweight. It only has three wheels – two in the front and one in the back. And there’s not much trunk space.

Then if we look at the hood and the top of the vehicle – those are solar panels. They use energy from the Sun to charge the battery.

The end result is that Aptera’s SEV can travel about 1,000 miles on a single charge. That’s impressive.

But the reality is that the power generation from solar is only about 40 of those miles. It may look good from a marketing perspective, but 96% of the charge comes directly from the battery, which can be charged just like any other EV. And as we know, an EV is only as clean as its source of electricity.

Clearly, 1,000 miles is incredible range for an EV, far more than the typical 300 miles or now. Aptera accomplished this through a range of design decisions. It optimized for aerodynamics in order to reduce drag on the vehicle.

And because it’s small and light, the battery-to-vehicle weight ratio is quite high. That basically means more milage for the vehicle on a single charge.

This SEV provides incredible performance as well. It can go from zero to 60 mph in just 3.5 seconds. I’m sure it’s a lot of fun to drive.

So what we’re looking at here is a completely new category of EV transportation. I suspect these SEVs will find a useful niche in the marketplace.

I always get a kick out of neighborhoods in the U.S. that have a lot of street-ready golf carts on the road as a means of local transportation. This is the equivalent; but with a 1,000 mile range, a closed cabin, and the ability to travel on a highway at speed.

And if we look at the pricing – Aptera is selling these SEVs in the $25,900 to $50,700 range. That makes them potentially far more affordable than full-size EVs.

For comparison, pricing for the least expensive Tesla starts at just under $47,000. And the higher-end Tesla models start at over $100,000 in price.

So far, the company has booked over 32,000 reservations. That’s a positive indication of demand.

Aptera’s following the Tesla model here. It allows consumers to place a reservation for just $100 down.

The first SEVs are set to go into production in Carlsbad, CA, next year. Here’s another example of domestic manufacturing designed to target the local market.

So we won’t have to wait long to see these SEVs in action and see what demand is really like. After all, it’s one thing to put down a $100 deposit, and another to shell out $30K or more for an SEV.

How to gauge a launch rocket’s safety mechanism…

We’ll wrap up today with a notable event in the race to commercialize access to space.

And it all went wrong…

Here we can see the initial launch goes off without a hitch. But about a minute after launch at around 29,000 feet of altitude, the rocket malfunctioned.

This triggered the safety mechanism that jettisoned the spacecraft – which is normally the crewed capsule – away from the rocket. That’s the fiery thrust we see.

The purpose here is to get the crew capsule away from the rocket as fast as possible in the event due to the possibility that the rocket might explode. And we can see that worked perfectly.

Once the capsule jettisoned away at a safe distance from the rocket, it deployed a parachute and safely floated back down to Earth. The rocket however, imploded in a nasty crash in the West Texas desert.

No doubt about it – this malfunction is a major setback for Blue Origin. This is the first major failure of the New Shepard since its first flight in 2015.

And now, Blue Origin’s operations are on hold. The company will need to engage with the Federal Aviation Administration (FAA) on an extensive safety review before the approval of any future launches.

That’s a positive. Had this launch been crewed, nobody would have been hurt. The entire crew would have arrived back on Earth safely.

So it’s not all bad news for Blue Origin.

Still, I have to think this may cause some people on Blue Origin’s space tourism waitlist to reconsider their reservations…

That’s something I’ll watch for in the coming weeks.