Thank you to everyone who took the time to join my crypto livestream last night. It was an incredible night, one that was years in the making.

I had been patiently waiting for the right time to launch my research product focused on next-generation cryptocurrencies, and finally, that time has come.

This service isn’t about bitcoin or Ethereum… It’s about the digital assets representing the technology that’s building the next generation of the internet. I call it Web 3.0.

This is a critical space for anyone who’s interested in digital assets or blockchain technology.

Right now, we are seeing blockchain projects develop the protocols that will create Web 3.0. And it’s all happening just below the surface. Very few people are aware of it. That’s our great opportunity.

Imagine investing in the original protocols of the world wide web, which gave rise to Amazon, Facebook, and Google. That is the opportunity we have today – except Web 3.0 will be open, fair, secure, and transparent. It won’t exist to serve “Big Tech” at the expense of the consumer.

Bigger picture, Web 3.0 is going to unlock the original vision behind the internet. The vision that our internet today failed to achieve.

The internet was supposed to democratize economic power and influence. The goal was to provide everyone unfettered access to information. And with blockchain technology, we will finally achieve that goal.

And there are many layers to this story…

We have talked about the developing non-fungible token (NFT) space quite a bit in these pages. NFTs are in their infancy right now, and there’s plenty of growth ahead. These digital assets promise to disrupt the fine art and collectibles space. We’ll examine more evidence of this in just a few minutes.

And as the industry continues to develop, we’ll also be able to invest in novel assets like security tokens. These are digital versions of real-world assets. Imagine owning a portion of a natural gas refinery or a percentage of a residential real estate building.

Simply put, these kinds of investments have never before been available to normal investors. That’s why I’m so excited to start talking about investment opportunities in digital assets. A whole new universe of investments is opening up to us.

For readers who are interested in these new opportunities but weren’t able to join us live last night, please take the time to check out the replay right here.

We will keep it up for a short time, but please don’t delay. There are many time-sensitive investments in this space right now.

The blockchain version of 5G…

We will start today with an exciting project in the blockchain space.

A blockchain company called Helium just raised a cool $111 million in an early stage funding round led by Andreessen Horowitz. This investment came out of Andreessen’s $2.2 billion crypto venture fund.

What’s unique about Helium is that it’s working on decentralized wireless network technology. And unlike most blockchain projects, Helium’s network requires a hardware component. It’s not just software on the computer.

Helium’s first development is what’s called the LongFi Network. This is a decentralized Internet of Things (IoT) network. It allows users to connect sensors that will constantly report data to the network.

For example, we could connect air quality or flood sensors to the network to monitor environmental conditions. We could connect dog collars to track our pets in real time. And that’s just scratching the surface. There are all kinds of applications for this technology.

The LongFi Network is propagated by individual nodes. These nodes are small hardware devices that users buy and then plug in at their home or office. Once plugged in, these nodes connect to each other to create a low bandwidth long-range network that’s perfect for IoT devices.

And get this – 112,000 active Helium nodes are running right now. That’s impressive for a project very few people have heard of. And this is where the economics kick in…

The people running a node get paid in Helium’s native cryptocurrency HNT.

Right now, one HNT is worth nearly $22 per token. The market cap is nearly $2.1 billion.

HNT can be converted directly into Ethereum (ETH) and then converted into U.S. dollars to create a functional income stream. Or it can be used to purchase space on the network. If we want to connect a sensor, we pay for it with HNT.

So this creates an economic incentive for people to run Helium nodes, which in turn strengthens the LongFi Network. It also requires users to hold HNT if they want to purchase space on the network.

The economics alone make Helium interesting. And the project’s next goal makes it one of the most exciting blockchain projects out there…

Helium recently announced that it will begin building what it calls the FreedomFi Network.

This will be a decentralized 5G network. Users will be able to connect their smartphones and other 5G-enabled devices to utilize ultra-fast 5G speeds.

And here’s the thing – this will be a decentralized network that’s not controlled by any company or organization. It will allow people to bypass the large wireless carriers entirely.

That means it will likely be cheaper. And more importantly, it will be completely censorship-resistant.

This censorship-resistant feature is critical in today’s world. We know that certain companies censor communications, block access to websites, and even monitor phone calls.

None of this can happen on a decentralized 5G network. That’s why it’s called FreedomFi.

This is a great development. I believe decentralized networks like this are necessary and inevitable. We just need the right economic incentives in place to make them happen. That’s what Helium brings to the table.

And, of course, this $111 million raise will go a long way toward making FreedomFi a reality. I look forward to following Helium’s progress in the coming months.

The next big NFT auction is coming up…

Traditional auction house Christie’s is gearing up for another notable auction of non-fungible tokens (NFTs) next month. This is more proof that NFTs aren’t a passing fad.

And the upcoming auction at Christie’s will include NFTs from three of today’s hottest collections – the Bored Ape Yacht Club, Meebits, and CryptoPunks. These are digital pieces of art. 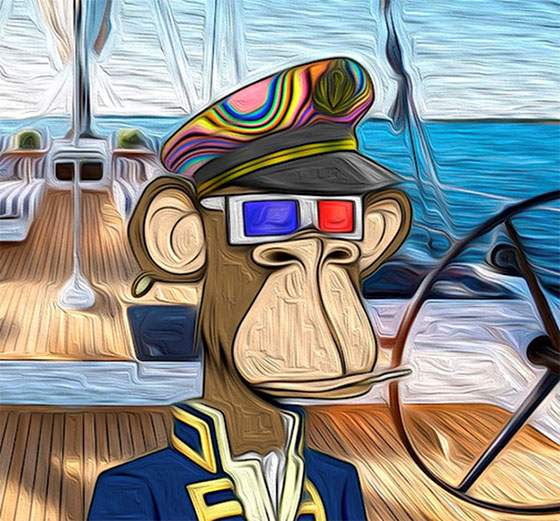 This is a painting based on one of the original Bored Ape Yacht Club NFTs. And get this – the bidding for these NFTs will start at $100,000. That gives us a sense of how much value the market is assigning to this asset class right now.

So I’m expecting this to be a big auction. I’m sure total revenue will be in the tens of millions.

After all, Christie’s isn’t new to the NFT game. The auction house sold its first NFT for $131,000 last October. It followed that up with the $69 million sale of Beeple’s digital art back in March. And then Christie’s sold a group of CryptoPunk NFTs for $17 million in May.

So Christie’s has a strong track record already. And what’s most notable is how the traditional auction house has been so open to the NFT trend.

Usually, legacy incumbents will downplay the importance of a new trend that has the potential to disrupt their own business. They tend to protect the status quo at any cost. But that’s not the case here.

Clearly, Christie’s recognizes that NFTs are the future of collectibles. The industry will inevitably go in this direction. That’s why I’ve made an effort to bring news of this space to my subscribers. There is simply too much money flowing into NFTs right now.

And if anyone wants to learn how to begin gaining exposure to NFTs – and more about how they work – then please go here to watch my recent presentation on the “tokenization” trend we’re seeing.

We’ll wrap up today with a topic that may seem a little “out there” and perhaps even a bit creepy. Yet it has immense implications for the future of health care.

Scientists at the University of Wisconsin just conducted some genetic experiments on spiders. They used technology called RNA interference (RNAi) to see if it could effectively interfere with the genes of a daddy longlegs spider.

And sure enough, it worked. Look at this:

These are mutated daddy longlegs spiders. And notice how their legs are not as long as we would expect. That’s the RNAi technology at work. Scientists basically “turned off” the gene responsible for growing long legs.

I know this is a weird experiment, but it’s an effective demonstration of how RNAi technology works. If used improperly, this tech could be very dangerous.

But it can also be used for developing lifesaving therapies that can help cure diseases. For example, in diseases caused by a hyperactive gene, an RNAi therapy could simply turn that gene off, restoring normal bodily function.

We have seen a surge in research and venture capital investment around RNA technology over the last 18 months or so. The success of Pfizer, BioNTech, and Moderna with their messenger RNA (mRNA) vaccines was the catalyst.

And research like this shows that there are all kinds of other applications for RNA-based therapeutics.

We already have one company pioneering RNA technology in our Exponential Tech Investor portfolio, and I am tracking an exciting pipeline of early stage companies in the space as well. This is going to be a major investment trend over the next five to 10 years.