We are setting up for a new Roaring ’20s of the 21st century.

Compare present-day to 100 years ago, and we see some distinct parallels.

After all, both times experienced deadly pandemics. Masks became an important political and social symbol in both. And while the Spanish flu of 1918 was way worse than COVID, in each period our way of life ground to a halt. Everything went on hold as we waited for a vaccine to arrive. In both cases, they did.

It’s important to compare these events because the 1918 pandemic helped pave the way for the most prosperous boom-time economy in modern history: the Roaring ’20s.

Immediately following the flu pandemic, the 1920s saw America’s economy grow 42%. After years of pent-up demand, consumers flooded the economy with cash when they finally could.

This coincided with mass production pushing products into every household. Modern automotive and airline industries were born in the wake of the flu pandemic. Progress, excess, wealth creation, and the “high life” all blossomed.

And now I think we’re about to see that type of prosperity happen again in a big way.

A Roar or a Whimper?

My nearly 20 years working on the Street has helped give me insight into how markets move… and how we can profit. That’s why I’m so excited to bring you today’s essay…

Now, some readers might doubt that the Roaring ’20s are on their way. After all, based on the Q3 returns thus far this year, you might think it sounds more like a whimper than a roar.

Earlier in the summer, I was ready for concerts, family vacations, and to be out again. Vaccines were flying into arms nationwide, and the feel-good summer season fueled optimism that COVID’s cloud was disappearing.

Then Delta variant flew in. I even got a breakthrough infection despite being doubly vaccinated with Pfizer’s jab. Clearly, I was not alone, and sunny vibes quickly became overcast with the threat of new outbreaks. 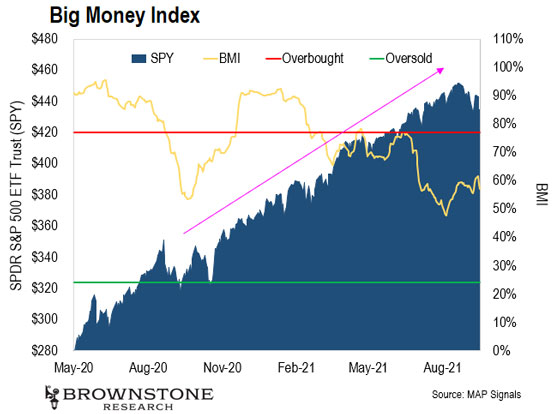 But since February, money has been flowing into huge stocks such as AAPL, AMZN, MSFT, FB, and GOOGL (and GOOG). These five companies together are worth $11 trillion. But the SPY (entire S&P 500) has a market cap of about $40 trillion.

This highlights a problem with the big indexes being everyone’s proxies for “all” stocks. That’s because they are market cap-weighted, which assigns more importance to bigger valued stocks. If money is moving into the five biggest stocks, it accounts for 25% of the index.

In other words, when just those few S&P 500 stocks go up, they prop up the entire index. That’s why, on a data level, I prefer to look at a larger number of smaller companies – the Russell 2000 Index (IWM).

This clearly tells us money has been moving into the biggest stocks, but not necessarily the rest of the market.

Look at the same Big Money chart overlaid on the IWM… We see a clear difference: 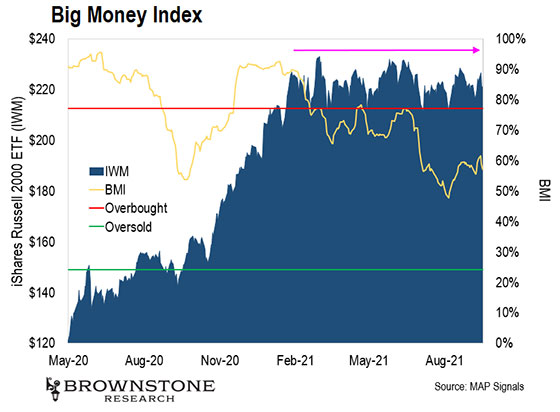 In other words, the big indexes have risen, but money hasn’t been chasing all stocks.

So I understand when some may say, “Jason, you’re touting the next Great Gatsby era, but stocks have gone nowhere on average. And now we are dealing with vicious inflation and fears about interest rates. I’m not sure I see things your way.”

On the Cusp of a Bull Run

I look at all stocks getting bought and sold in an unusual way. That’s how I tend to find outlier stocks. When big money buys the best quality stocks, I pay attention.

Recently, I’ve seen buy signals emerging on many high-quality growth stocks for the first time in a while. 35% of these buy signals were on companies exhibiting superior one-year sales growth, and 22% had both superior sales growth and were profitable.

That means there’s an undercurrent of demand for quality. I haven’t seen buy signals on these kinds of companies in months. Yet suddenly, they are getting scooped up. A bid for quality is bullish. And bull runs are often sparked to life when leaders lead higher. I am excited to see buying in stocks like these.

Then there’s seasonality. We are about to emerge from a decidedly cruddy September for stocks. That was expected, as it’s historically a weak month. But since 1990, October through December is a seasonally very strong time:

In the 1920s, the index that really told the story of American commerce was the Dow Jones Industrial Average. These days, a better gauge is the tech-heavy Nasdaq Composite. It’s more dialed into our times.

Now, to visualize why I think we are set up for a Roaring ’20s, look at a graph of the 1920s Dow Jones overlaid with the modern Nasdaq: 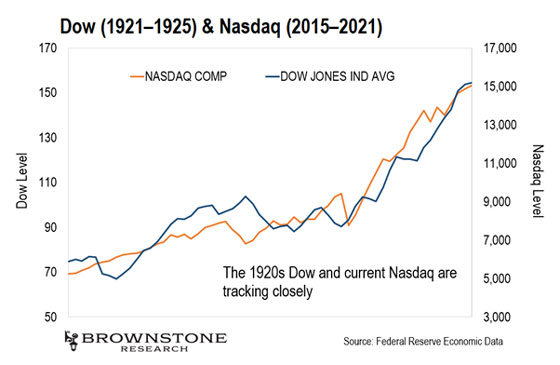 Look at how closely they track. Now keep in mind there were another four years of monstrous gains to come before the infamous collapse of 1929: 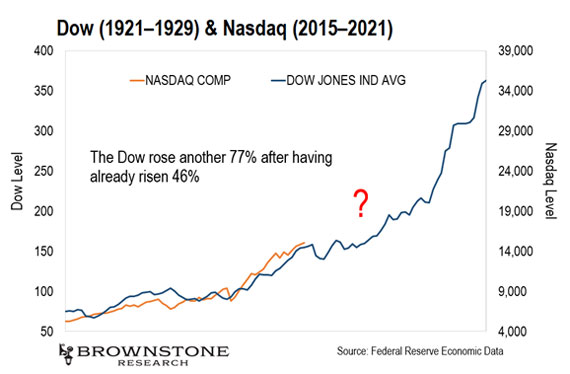 The Dow Jones Industrial Average went on to rise another 77% after having already risen 46% up to December 31, 1925.

Now for those of you worrying about another epic collapse four years from now, I’d like to make one last distinction: The original Roaring ’20s ended badly. But the crash came not because of the epic heights of stock prices, but because of how they got there.

The monster rise started for the right reasons: new industry, growth of commerce, and investing in businesses.

But the meteoric rise that ensued was fueled by speculation. Investors were giddy with greed and excess. They bought on tips with no idea what they were buying and leveraged themselves to the hilt.

We’re nowhere close to that level of exuberance right now, especially since there are now safeguards against it. Brokers are actively curtailing leverage, and people have gotten burned by meme stocks and other faddish attempts to make money.

So the setup to me is clear: Great growth stocks should benefit going forward. It may be bumpy with uncertainty over interest rates and inflation, but I’m still extremely bullish on the outlook ahead.

P.S. If you’d like to learn more about Outlier Investor and how I’ll use Wall Street’s big moves to help readers profit in the coming Roaring ’20s, simply go right here for the details.