Editor’s Note: All week, we’re unlocking premium content from behind our paywall and re-publishing it for readers of The Bleeding Edge. Yesterday, Jeff shared part 1 of his analysis of the upcoming event known as “The Merge.” Catch up right here.

Today, we share part 2. Read on to see Jeff’s prediction for Ethereum and the “layer-2” assets that will be some of the best investments in the crypto space in the years ahead.

As I shared yesterday, we are fast approaching an event known as “The Merge.” And it will be the most important near-term catalyst for the entire cryptocurrency market.

At a high level, “The Merge” is when Ethereum – the world’s second-largest blockchain network – will switch from Proof-of-Work (PoW) to Proof-of-Stake (PoS).

The first impact of this is that the energy used to secure the network will drop by more than 99%. And Ether – the native asset of the Ethereum blockchain – will be viewed as an investment aligned with the broader “green movement.”

The switch from PoW to PoS enables Ethereum to put layer-2 scaling solutions in the limelight. That’s because the upgrade enables layer-2 solutions to be more effective and efficient.

Ethereum 2.0 essentially makes data extremely accessible, and secure enough, for layer-2 solutions to interact with it.

So while Ethereum will continue to be relatively expensive, layer-2s will reduce transaction costs from tens of dollars to pennies. This is the change users have been waiting for years to see. And I’m sure we’ll see users quickly migrate from layer-1 to layer-2 in the coming years.

This is also great for application developers. It will allow them to develop more features and designs that are no longer held back due to costs.

At the end of it all, this is great for the market. Layer-2 blockchains will compete with one another to win over users. And in this type of competitive environment, the end user is likely to win out.

This shift in competition is not something in the distant future. We are already starting to see it play out…

Polygon, for instance, made a massive announcement regarding a tech solution that makes things extraordinarily simple for developers via its zkEVM.

For context, zkEVMs are what blockchain developers refer to as a zero-knowledge (zk) rollup – a “layer-2” network that runs atop Ethereum to process transactions, bundle them up, and pass them back down to Ethereum’s layer-1 mainnet.

Polygon’s zkEVM solution will reduce transaction costs and greatly increase throughput across the network. This overhaul is so massive that even Polygon co-founder Mihailo Bjelic chimed in to say, “Besides ‘The Merge,’ this is the second-biggest event in terms of technology in the ecosystem in general.”

Optimism, another scaling solution, recently dropped its OP token to the network to gain new users.

Then two months ago, Starkware, another layer-2 solution, announced it raised $100 million at an $8 billion valuation for business development, among other reasons.

The industry sees where the ball is rolling…

And this competition will only grow as users migrate away from layer-1. The fun part here is that it all begins with “The Merge.”

Before we get to what the market is missing when it comes to “The Merge,” let’s quickly go over what to expect in the months to come regarding the timing of this event.

Ethereum developers are notorious for delaying releases. On the surface, this is frustrating for investors who want to see dates met.

But for developers, it’s more about making sure they dot the I’s and cross the T’s. We should not be discouraged if we see delays in the coming weeks and months. This is relatively normal.

On a positive note, Ethereum developers are already running simulations of “The Merge” with success. They can do this with their several testnets.

Testnets are where developers can launch smart contracts to see how they work, without putting users or their own capital at risk. They also allow developers to test upgrades to see if any issues arise – which comes in handy for an event as large as “The Merge.”

To date, developers have already begun testing out “The Merge.” In June, the first testnet, called Ropsten network, successfully migrated to a PoS model. It was a significant hurdle, as developers were able to then take what they learned, iterate, and begin preparations to do it on another testnet.

This next testnet merge is expected to happen around August 11. This will be done using the Goerli testnet. And if all goes smoothly, then the next event would be the actual merge of the mainnet.

This date is currently penciled in for the week of September 19… That’s right around the corner. And with these milestones coming up, investors will want to add ETH to their portfolios ahead of “The Merge.”

The main reason we’re looking to do this ahead of time is that Ethereum’s economics will change once it goes to PoS. And this is where we see the most potential, in terms of price, in the months to come…

Millions of newly minted ETH enter the market each year. While the amount in terms of percent has declined over the years, it is still significant.

In the chart below, we can see the annual inflation rate of ETH since 2015 – It currently sits just above 4%. This means that at a current supply of 119.78 million tokens, that percentage represents nearly five million ETH tokens over the course of a year. 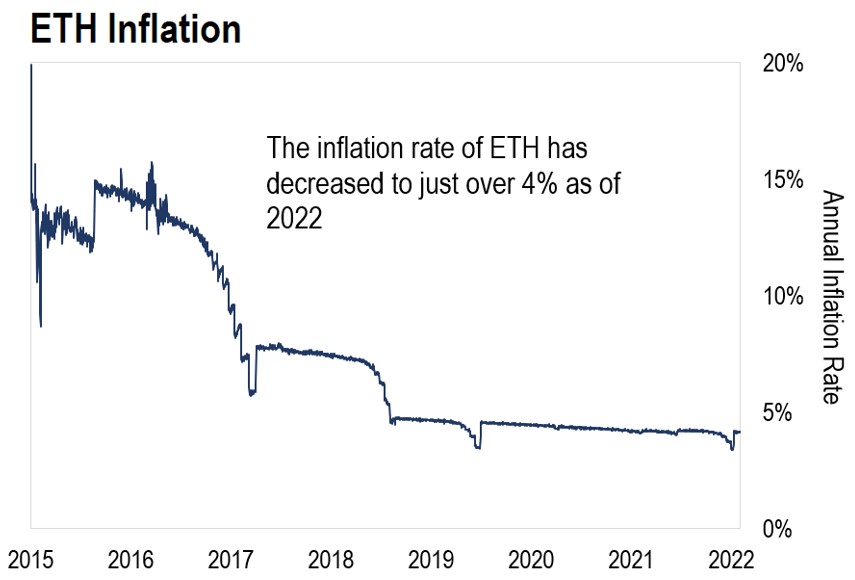 There are several pros and cons to having a sizable inflation rate for a new network – one that realizes the exponential growth of its user base.

But what we want to focus on here is what happens after “The Merge.” A trifecta of factors will come into play, each one with a deflationary effect.

And combining all three means this figure is likely to go negative. To put it another way, each ETH token will become scarcer.

Imagine for a moment if the U.S. government destroyed a percentage of the total money supply every year. Each dollar would likely become more valuable with each passing year. This is what will happen with Ethereum.

And I’d like to take a moment to break down the three factors that will make this happen.

The first is the number of rewards blockchain validators will receive.

Right now, the annual rate of new tokens entering circulation comes to 4.85 million ETH. This is based upon the two ETH that are created with each new block added to the blockchain. After “The Merge,” this rate will decrease to a range between 180,000 to 1.8 million ETH.

The wide range depends on the number of users that stake their tokens to become validators. The more validators, the more rewards that get issued.

Right now, most major PoS networks realize between 60–80% of tokens are staked to the blockchain. The main difference between Ethereum and other networks is that the ETH token has many use cases.

It is used as collateral for loans, as we have seen via MakerDAO. It can also be used to pay for a non-fungible token (NFT) in the multibillion-dollar digital art market, or simply used as gas in a network with the most economic activity.

This is why we can expect the amount of ETH staked to the network to be less than other networks. At less than 50%, this means the issuance will likely sit in the middle of that range.

If we take the current amount of ETH already staked to ETH 2.0, the amount as of May 2022 would equate to less than 50,000 ETH minted for the month.

The second factor contributing to the downward pressure on new supply is an upgrade that took place not too long ago called EIP-1559. This upgrade takes a portion of the fees paid by users to miners and burns it.

This means, as network activity rises, more ETH gets burned. Over 2.55 million ETH have been burned since the measure went into effect in August of 2021.

If we look at May of this year, the network burned just shy of 200,000 ETH. Using round numbers, this means if Ethereum was PoS this past May, the total supply of ETH would have dropped by approximately 150,000 ETH.

If we scale that up to one year, that comes to 1.8 million ETH, or an inflation rate of negative 1.5%. This is very significant. And it gets us to the third factor…

Shanghai is the next upgrade scheduled after “The Merge.” This upgrade allows users to unlock their ETH staked to the network. So if you were to stake your ETH today, you cannot unlock it. It’s a one-way transaction.

This translates to less ETH available in the market until the Shanghai upgrade goes into effect. And right now, there is no set date. The current estimate is sometime in 2023. We can think of staking as a kind of supply sinkhole for the coming year.

These three factors in tandem will spark a major supply shock in 2023.

This supply shock isn’t receiving as much attention within the blockchain industry as it should. But to date, its significance is being overshadowed by the event itself. That’s because most news coverage focuses on whether or not “The Merge” might be delayed.

Whatever potential delays may arise, we can ignore the headline news. We just need to focus on the bigger picture when it comes to Ethereum 2.0.

Long-term, ETH will be a must-own for any digital asset portfolio. And “The Merge” will create the perfect opportunity for investors to gain exposure to this industry-leading token.