Editor’s Note: This week, we’ve been unlocking premium paid Brownstone Research content to share with readers of The Bleeding Edge. Previously, we’ve shared pieces from Neural Net Profits and Unchained Profits. You can find those here, here, and here to catch up.

And today, we’ll share some of Jeff’s macro-level thoughts regarding the Fed’s actions and the state of the economy as a whole…

The Fed has now raised interest rates in March, May, June, and July this year, bringing us up to a target range of 2.25–2.5%.

The Fed Funds rate is important for investors because rates across the entire economy tend to “feed” off this rate. Everything from the yield on corporate debt to mortgages on new houses is impacted by it.

Now think about this… Rates are still incredibly low by historical standards. In fact, the Fed Funds Rate reached the same range in the summer of 2019 – before the coronavirus pandemic.

But despite that fact, the markets have had an extreme reaction to all the hawkish talk… and we have seen a dramatic valuation compression in stocks – particularly, in growth companies.

Yet there’s a method to the madness…

The goal of the Fed’s hawkish policy is to cause demand destruction.

That’s why the Fed is talking tough on the size and frequency of future rate hikes. They see it as a way to talk down demand in the marketplace… The idea is that this will cause prices to fall.

How can I be so sure about this? After all, there’s a lot of talk right now about how past Fed Chairman Paul Volcker handled inflation back in the late 1970s and early 1980s.

In March 1980, Volcker raised the Federal Funds rate to a whopping 20%. And he proceeded to keep it above 16% until May 1981. That’s 14 months of high double-digit interest rates.

The thinking here was that interest rates needed to be higher than the inflation rate if we wanted to truly squash inflation. And that’s exactly what happened.

It was a painful period for the economy and the markets. However, the “Volcker Shock” brought down inflation, and then the economy revved back up.

If today’s Fed were to follow that same game plan now, Fed Chair Jerome Powell would need to raise the Federal Funds Rate at least another 1,000 basis points to over 10%.

We have already seen the impact a 225 basis point hike has had on the markets. Imagine what would happen if the Fed followed through with 1,000.

The reality is it won’t happen. It simply can’t happen.

Anyone suggesting that Powell can follow Volcker’s playbook today is missing a critical dynamic.

This means that the federal government had accumulated a debt burden that was equal to about 30% of the total value of all goods and services produced in the country each year. And its yearly deficit was about 2% of that.

Every major country and nearly every major company in the world holds U.S. Treasury bonds on their balance sheets.

So the federal government must continue to service all of its debt and continue to make interest payments. The global financial system would collapse if it didn’t.

And guess what? If interest rates went up to 10%, per the Volcker plan, it would cost the federal government $3 trillion a year in interest payments on its debt.

For perspective, the federal government’s total tax revenue for fiscal year 2021 was estimated to be just under $3.9 trillion. 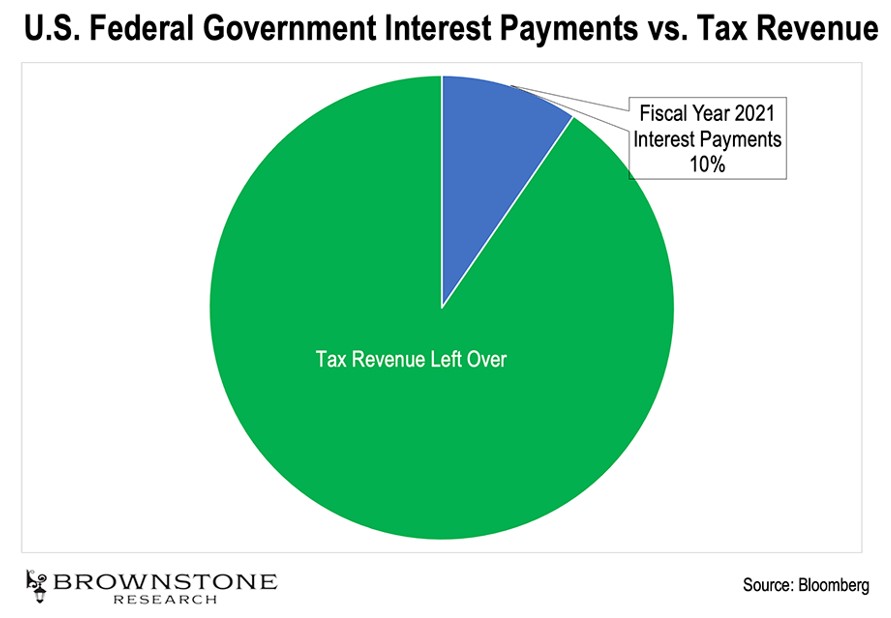 But if rates rose to 10%, interest payments would encompass about 77% of all tax revenue, leaving $900 billion for other spending: 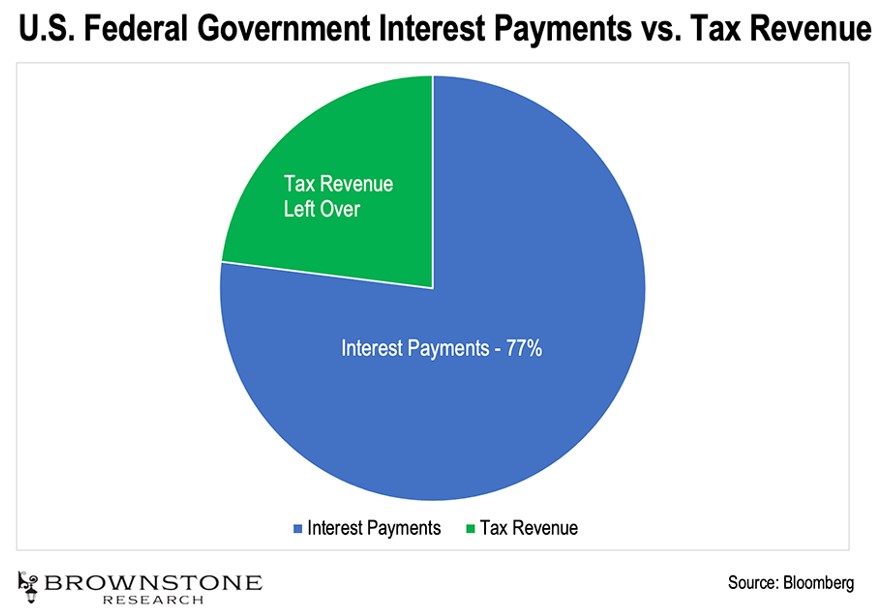 The point is, the U.S. government cannot afford a massive increase in interest rates.

It would have to print money at such an extraordinary level that it would risk a hyperinflationary environment that would destroy the U.S. dollar… and would also destroy the global economy.

This leaves the Fed with only one real option – try to talk inflation down. That’s what it’s been doing.

And to be sure, the Fed’s hawkish talk has destroyed demand. But there’s a limit to how much of this the economy can absorb. And tomorrow, I’ll dive deeper into the critical signals I’m watching in the current market environment.

Editor’s Note: Tune in tomorrow to read part 2 of Jeff’s commentary on the Fed’s next moves and the economy as a whole. Jeff will look at some key data points all investors should be aware of…