Editor’s Note: This week in The Bleeding Edge, we’re sharing premium paid content from around the Brownstone Research franchise.

Yesterday, we presented Jeff’s essay on why the Fed can’t raise rates too high. And today, he continues his argument with some cold, hard data…

In fact, he believes the Fed won’t just be unable to raise rates much further – It will be forced to pivot…

Its rate hikes have walloped the personal savings rate: 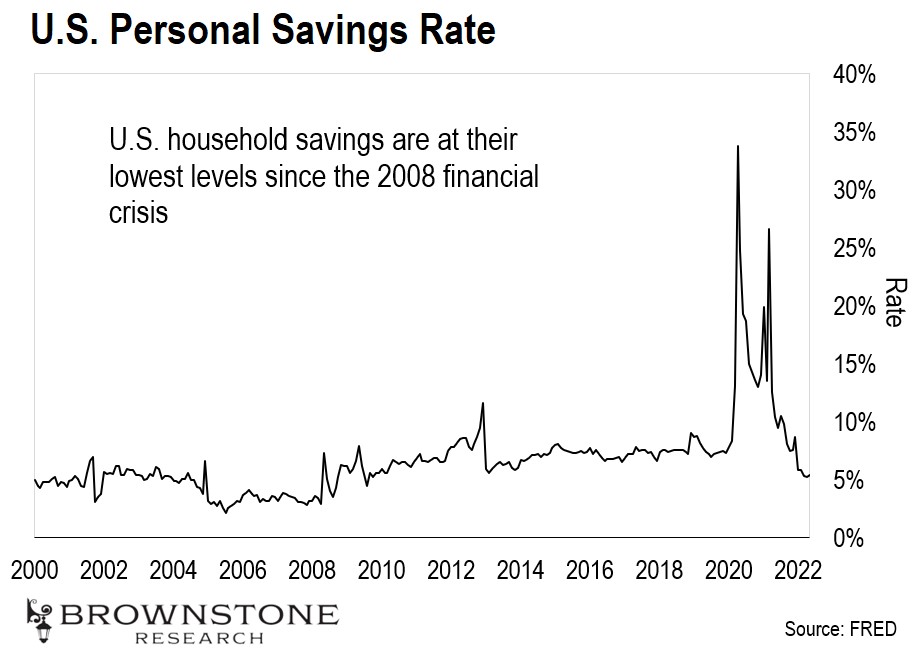 This rate has plunged all the way back down to 5%. That’s its lowest level since the 2008 Financial Crisis.

Irresponsible monetary and economic policies have basically sucked most discretionary spending away from U.S. households. This creates a ripple effect throughout the economy.

We can see it clearly in retail inventory levels… 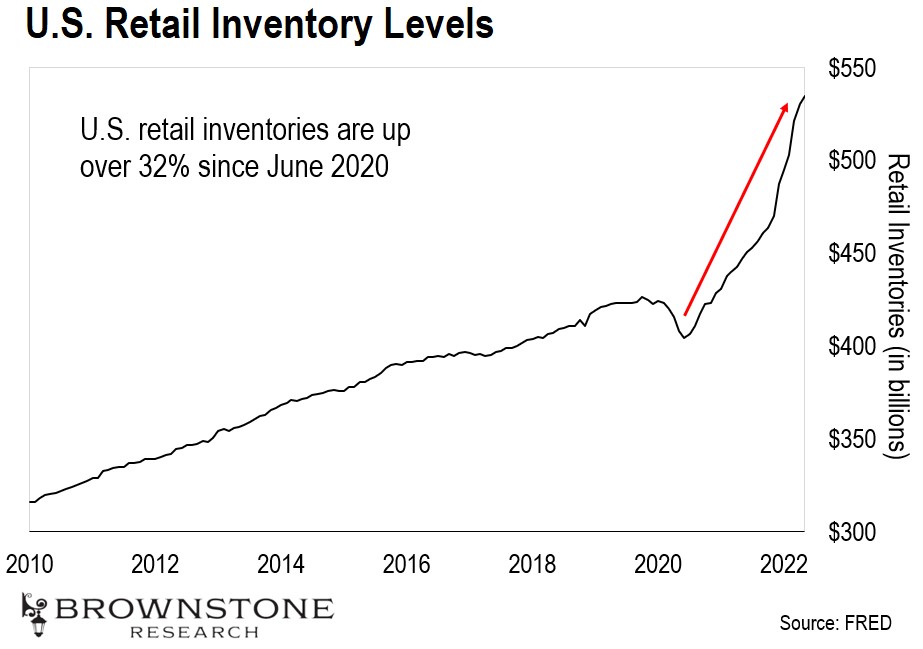 Retail inventories have been rising rapidly ever since we emerged from the COVID pandemic… And we can see a clear break to the upside in November of last year – just as the Fed’s hawkish talk ramped up.

This is clear evidence of demand destruction. And to be sure, we will see prices level off and begin to fall as a result of this inventory build-up. That will help soften the blow of consumer price inflation – at least for some goods.

The Housing Market Is Shifting

This chart tracks the percentage of home purchase contracts that fall apart each month.

These are instances where a buyer and seller have both signed the purchase and sales contract on a home… but the deal is called off.

It’s normal for around 11–12% of home purchase contracts to fall apart in a given month.

We did see a spike up to 16% and 17% at the onset of the COVID-19 pandemic. That’s to be expected. But look at what’s happening now. We are seeing a similar spike. Nearly 15% of all home purchase contracts were canceled in June. This is a direct result of demand destruction.

The Fed only hiked the Federal Funds Rate to 2.25–2.5%. Yet, as a result, mortgage rates have more than doubled.

Consumers could previously lock in a 30-year fixed rate mortgage for under 3%, but recently the going rate has been around 5.75%.

So buyers who signed the contract but hadn’t yet had a chance to lock in their rate are walking away.

Of course, this has ripple effects as well.

We are starting to see falling demand for new construction homes. This is most evident in the prices of lumber and wood – one of the primary components: 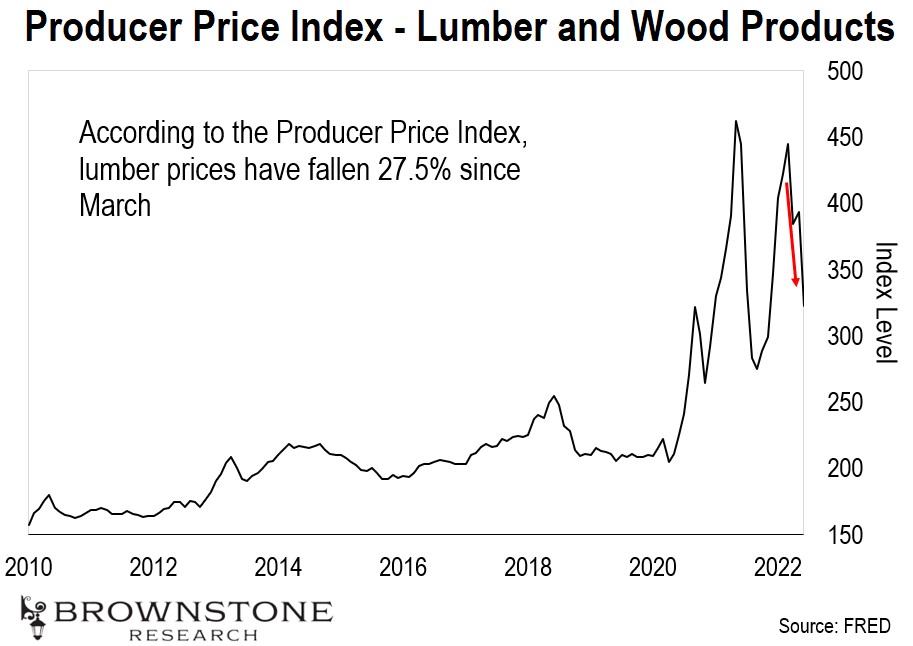 This dynamic is one more reason I don’t believe the Fed will be able to follow in Volcker’s footsteps.

According to the National Association of Realtors, the housing affordability index recently hit a 15-year low. Put another way, buying a house hasn’t been this unaffordable since 2007.

If the Fed were to follow Volcker’s strategy, mortgage rates would spike, likely somewhere between 15% and 20%… That would be a death blow to the housing market.

In other words, it’s a non-starter for the Fed, which is committed to a “soft landing.”

Let’s look at the relationship between part-time employment and the unemployment rate: 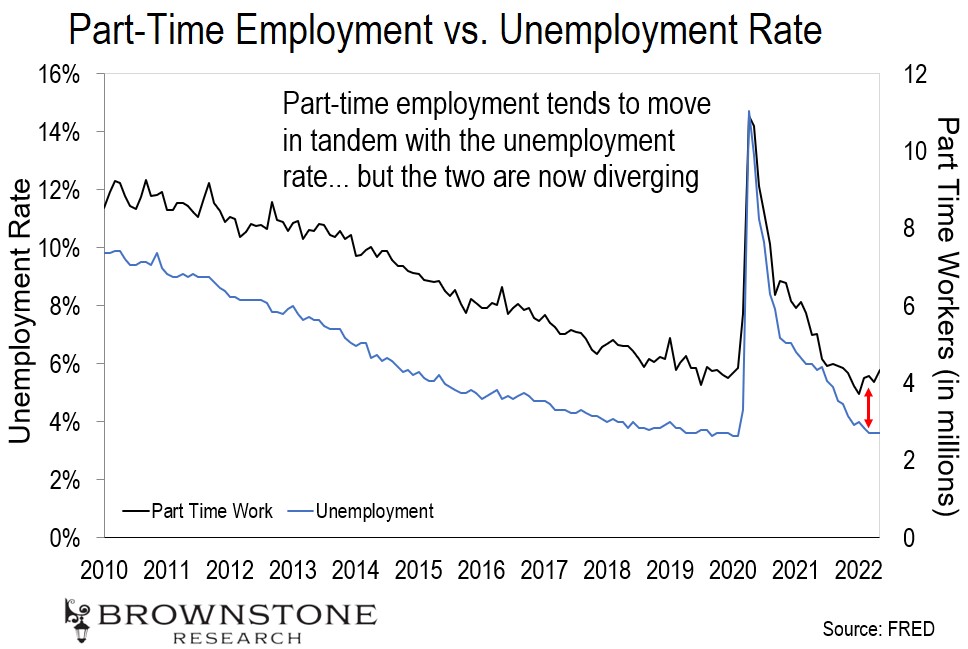 As we can see, there’s a very clear correlation between the number of part-time workers and the unemployment rate. As unemployment goes down, fewer people work part-time jobs. And vice versa.

The reason for this is simple. When the economy is good, there are more full-time jobs available. People don’t need to work part-time jobs.

But look at what’s starting to happen now. The unemployment level is still very low – close to 3%. But the number of people working part-time jobs just jumped over four million.

The two lines are diverging.

If we continue to see part-time work rise in the coming months, it’s a tell-tale sign that unemployment is going to increase. And that likely means recession.

And that brings me to my core thesis.

The Fed Will Have to Reverse Course

The Fed is stuck. It cannot follow through with aggressive tightening because the U.S. government cannot afford it, and the economy cannot take it.

The Fed will have no choice but to reverse course and pursue some form of quantitative easing – And soon.

I believe we will see another token rate increase first, but the Fed is going to have to pivot in the fall if it wants to avoid a major collapse.

The federal government simply cannot afford for interest rates to rise. Its debt payments would become too onerous. And the flip side of the coin is also true – The government needs as much tax revenue as it can get.

Because the markets have crashed and the economy has slowed down, tax revenue is down significantly this year.

If the Fed follows through with its hawkish talk, tax revenues will continue to fall just as debt service costs skyrocket. It just isn’t sustainable.

So again, the only way out is through stimulus. The Fed will have to go into “money printing” mode to bail out the economy and government spending.

So I continue to expect a big pivot from the Fed in the fall, probably no later than the September meeting.

The Fed’s upcoming pivot will help avert a more serious crisis – at least for a while. But we are going to be grappling with these issues for years to come.

Still, the Fed’s pivot back to stimulus will be great for the equity and crypto markets. And I expect to see bullish market conditions return later this year.