During times of market volatility like what we saw back in the fourth quarter of 2018, and what we’re seeing right now, I always keep a close eye on what’s happening in the private markets.

Understanding what trends are happening in the private markets provides us with a view of the future. If private capital continues to flow into promising high-growth investments, that is a strong indication that there is still a longer-term bullish sentiment.

The converse is also true. If we see capital fleeing from private investments, that means that there is an expectation of a prolonged bear market and thus a flight to safety.

Private valuations are also a useful indication of bullish/bearish sentiment as well. If there is a belief that the economic conditions will be such that high growth companies will thrive, then valuations for each venture capital round will be high (and/or increase).

And if we saw a dramatic decline in private valuations, that would be an indication that private capital sees a less optimal environment for growth.

Below is a chart of the last five quarters of pre-money valuations from pre-seed rounds through Series B rounds. These are useful proxies because investing at these early stages is the riskiest window to invest.

By the time companies get to their Series C round and beyond, a business has been largely de-risked, and the story becomes more one of execution until reaching an exit of some kind (acquisition, merger, or an IPO). 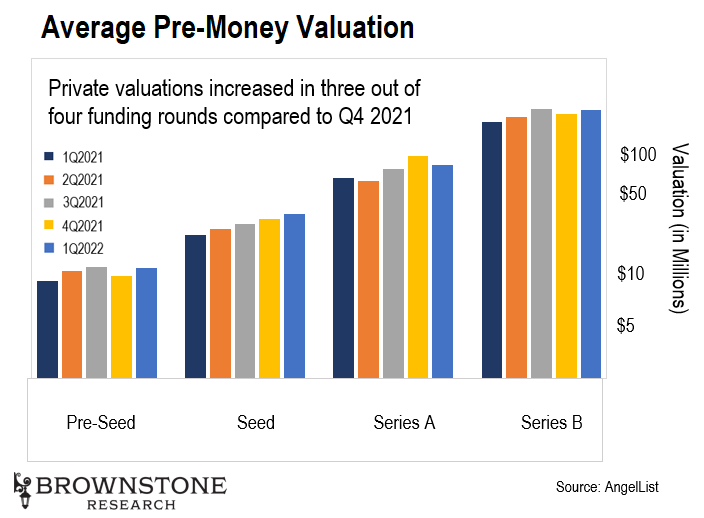 As we are all painfully aware, the market volatility began in the late fourth quarter of last year when the Federal Reserve began its aggressive talk around future Fed Funds rate hikes and quantitative tightening in an effort to combat inflation and the Fed’s unhealthy balance sheet.

There is no concern about what happens quarter to quarter, so temporary market volatility is never a concern as long as the long-term growth trends are in place.

And we can see this in the above chart. Even in the first quarter of this year, when we experienced the largest swings in the public markets, the valuations of private companies increased in three out of four stages of funding compared to the fourth quarter of last year.

Seed round valuations were at record highs, and Series B and pre-seed rounds saw their second-highest valuations on record. With the exception of the Series A round, which was only down slightly from last quarter, everything was up and to the right.

Analyzing what is happening in the private markets always helps me step back and gain an objective view of the future direction of the markets and overall investment opportunities. This data tends to be a strong indicator of what is to follow in the public stock markets as well.

And I would also mention that investing in private companies can be a great way to insulate and grow our wealth during times of volatility in the public markets.

In fact, diversifying some of our portfolio into private investments was my #1 idea for protecting our wealth during a recent investor conference. I pointed out that ultra-high-net-worth investors tend to have almost half of their portfolios dedicated to private companies.

And the reason is simple: Private investments are “crash resistant” – they aren’t affected by the gyrations of the public markets.

If any readers are interested in entering the exciting world of private investments, I’d encourage you to join me next Wednesday, May 18. On that night, I’ll share why now is the time to gain exposure to the private markets.

And I’ll also profile a special class of private companies… Something I refer to as “Crypto Placements.” To learn more, and to reserve your seat, simply go right here.

Big news on the self-driving front. Autonomous trucking company TuSimple just broke the seven-million-mile marker in autonomous driving. This is a huge milestone in the industry.

Regular readers may remember TuSimple. This is the company focused on fully self-driving semi-trucks that can ship goods across the country.

And TuSimple is working hard to prove its technology out in the field. One of the company’s trucks drove itself 80 miles from Tucson to Phoenix, AZ, just before Christmas.

Of course, TuSimple started with safety drivers in the cab. But the company is now initiating its “driver out” strategy. At first, this involves having a support vehicle follow self-driving trucks that no longer use a safety driver.

However, TuSimple’s goal is to rapidly phase out the support vehicle as well. That’s the last step before commercialization. And the company expects it to happen by the end of next year.

This may sound concerning to some. But TuSimple has strong safety measures in place. If a truck is unsure of how to handle a certain situation, it will immediately look for a safe spot on the side of the road to pull over.

From there, human drivers can “teleport” into the truck from a control center to take over. They can solve the issue and then get the truck back into self-driving mode.

And to further ensure safety, TuSimple is expanding its autonomous freight network (AFN). These are the set trucking routes between logistics facilities.

We can see below the company’s plans for expansion. The routes in black make up the current AFN. The company will add the yellow routes in time. 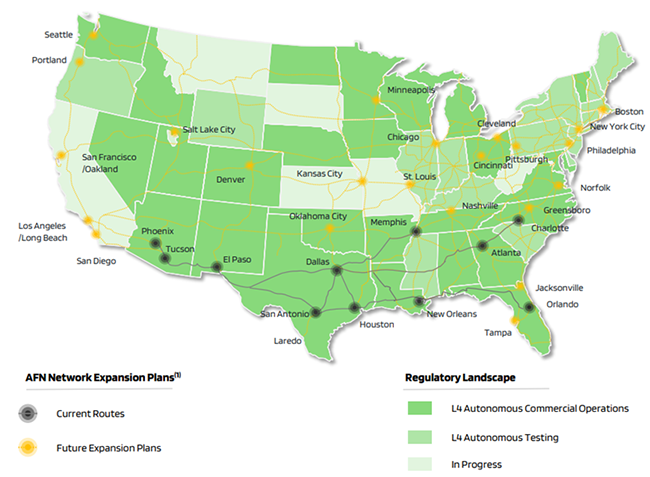 As we can see, TuSimple is starting entirely in the south. That’s because the chances of snow and ice are minimal. Still, the company plans to expand into northern markets in time.

So this is an exciting company that’s solving a massive problem – the trucker shortage. We are watching the company very closely for that reason.

That said, I can’t recommend investing in TuSimple at this time. It currently trades at an enterprise value (EV) that’s over 75 times sales. That makes the company absurdly overvalued today.

Something big is happening with this next-generation battery company…

This came out of nowhere…

Group14’s first funding round was back in 2019. That’s when the company really got its start. But it flew under the radar for the last few years. Group14 only raised about $35 million from 2019 to 2022. And its last known valuation prior to the Series C was $157 million.

I profiled several next-generation battery companies at our 2022 Legacy Investment Summit. However, Group14 didn’t make the cut. That’s because it simply did not have enough funding to do anything of substance at the time.

Of course, this $400 million round changes everything. Suddenly this is one of the top players in the next-generation battery space.

And think about this – Group14 is now valued at $3 billion. That’s over 18 times where it was prior to this Series C round. We don’t often see such drastic jumps like this. This tells us that something big is happening at Group14. They must have made a major breakthrough.

And if we look at who led the $400 million raise, iconic car maker Porsche led the round. Clearly, Porsche is positioning itself to be first in line for Group14’s next-generation EV batteries.

Because Group14 is a private company, we don’t have a lot of information on its battery design. But the company claims it’s working on a silicon-carbon anode that can deliver much higher performance than current lithium-ion technology. And Group14 said that the energy density is about 50% higher.

If true, this is absolutely a game changer. It means Group14’s batteries can be the same size as current lithium-ion batteries yet allow EVs to travel much farther on a single charge.

Or Group14 could develop smaller, cheaper, lighter batteries that deliver an EV range that’s on par with what’s possible today.

And here’s the kicker – Group14 plans to begin commercial production next year. Two manufacturing sites will produce the batteries – one in the U.S. and one in South Korea.

This is an incredibly aggressive timeline, especially considering Group14 was flying under the radar for years. No wonder Porsche jumped at the opportunity to back the company.

I’m skeptical that they’ll be able to meet those tight timelines, but still excited to monitor the company’s progress. We certainly want the team at Group14 to be successful, as it would be a fantastic development for the industry… and a competitive advantage for Porsche in particular.

Given the company expects to go into commercial production next year, I would not at all be surprised to see Group14 go public within the next 12–18 months. The stock would make for a great investment target at the right valuation.

We’ll wrap up today with another early stage startup that caught my eye.

A company called Cavnue just came out of the gate with a $130 million Series A venture round. And Ford, another iconic carmaker, led this round.

Cavnue is working on what it calls connected and automated vehicle (CAV) corridor technology. This is basically “smart road” technology that can optimize U.S. highways for self-driving cars.

The startup’s idea is to establish the equivalent of high-occupancy vehicle (HOV) lanes for self-driving and/or partially self-driving cars. I imagine this would require the conversion of HOV lanes into CAV lanes as most highways don’t have the additional space to build yet another dedicated lane.

CAV lanes will be loaded with sensors that communicate with autonomous and semi-autonomous vehicles. These sensors will give the cars perfect data regarding where they are in the lane.

And they will enable cars to “talk” with the autonomous vehicles in front of and behind them. This would allow self-driving cars to coordinate their actions. And that in turn will further improve safety.

As for monetization, Cavnue envisions a dynamic pricing model. Self-driving cars would have to pay for access to CAV lanes. And the pricing would fluctuate depending on the time of day and how many cars are on the road. That certainly makes sense.

Perhaps ironically, this technology is not necessary at all. Self-driving technology has gotten to the point where fully autonomous vehicles can navigate highways without needing sensors on the road.

That said, just because something isn’t necessary doesn’t mean it won’t be done. And I think this idea will be very attractive to state governments and local municipalities. They are Cavnue’s target customers.

If we think about it, CAV technology would temporarily boost jobs in a given area. This would equate to greater tax revenue for the state and municipal governments.

Plus either the state or the local municipality could administer a small tax on top of the CAV fees charged by Cavnue. Most governments would jump at such an opportunity, especially if they get to boast about job creation and improving safety.

So I think CAV technology could catch on even though it is largely unnecessary considering the capabilities of autonomous driving technology.

Cavnue’s first pilot project will happen in conjunction with the Michigan Department of Transportation. It entails linking Detroit and Ann Arbor with a CAV lane over a 25-mile stretch of Interstate 94.

We’ll certainly track this project’s rollout. I may even fly out to the Detroit area to check it out myself. If successful, Cavnue could become a company to watch in the autonomous driving space.

And like we saw in most of our stories today, the autonomous driving space is moving forward full speed ahead. If any readers want to learn my top ways to invest, then please go right here for more details.