I hope that you all found at least some of the editorial during the last two weeks useful and interesting. I thought it might be nice to share some research that I am not able to normally share in The Bleeding Edge. Now, we’re back to our “normal” Bleeding Edge issues through the end of the year.

Regular readers know that I keep a close eye on the private markets. It’s a great way to see around the corner at what’s coming. Large venture capital inflows into one specific sector always lead to major breakthroughs two or three years later, and ultimately initial public offering (IPOs).

Fund flows into venture capital can also tell us when the private capital is getting conservative. If venture capital fundraising collapses, we know that there would be less research and development, and it would also be an indication that the “smart money” is running for cover – fearful of allocating capital.

Which is what makes the below chart so interesting… 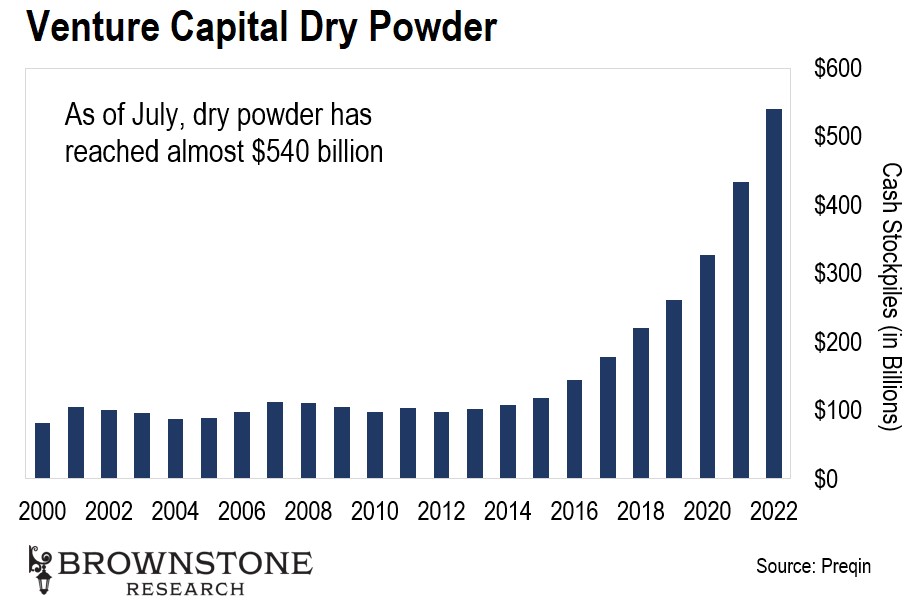 This chart shows the last 22 years of venture capital raised, but not yet deployed. This is referred to as “dry powder.” After the gut-wrenching first half of this year, it would be natural to think that everyone would be running for cover – But that’s not the case.

As of July, the dry powder has reached almost $540 billion, which is more than double the dry powder raised in 2019 ($260 billion). Not only has private capital not reducing investment levels, but they are also increasing allocation to venture capital.

And there’s only one reason to do that, it’s because they see the potential for outsized returns, and they see the current market volatility as something that is short-term. The public markets will return to health, as will economic conditions that will return to growth.

The nuance in the numbers is that the dry powder buildup, especially in the first half of this year, has in part been contributed to by VC firms investing less in the large, late-stage funding rounds… This is natural.

No company wants to raise capital on a down round (lower valuation than the last round), so private companies will often look to venture debt as a bridge to better fundraising conditions. And that results in an increase in dry powder.

When combined with record levels of capital inflows, we end up with a chart like the one above.

Either way, this is bullish. While I do anticipate that a few funds will return a small portion of the capital raised to their limited partners, the majority will be deployed into the most promising high-tech and biotech growth companies.

And that will result in a period of technological advancement, unlike anything we’ve ever seen before… But that doesn’t mean we should let our guards down. Even with the Nasdaq up 23% and the biotech index (XBI) up 48% since the June lows, we’re not out of the woods yet.

I expect we’ll have volatile market conditions through early 2023, but what comes after that will be for the history books.

Amazon’s expansion into health care is ramping up…

Amazon just made a power move. And with this one, the tech giant’s ambitions to become a dominant health care provider are nearly complete.

That’s because Amazon just acquired an innovative health care provider called One Medical. The price tag was $3.9 billion… With nearly $61 billion in cash, that’s an easy acquisition for Amazon.

I personally know One Medical very well. The company launched its first clinic in the Bay Area when I was living in Palo Alto. I was one of its original customers.

One Medical’s big idea was to bring the subscription model to health care.

Starting in the Bay Area, the company opened small clinics, each staffed by a handful of physicians. Fast-forward to today, and One Medical has multiple clinics in 25 different U.S. metropolitan areas.

To access these clinics, customers are required to pay a subscription fee. It’s basically like a Sam’s Club membership for the doctor’s office.

And I can say that the experience is fantastic. The clinics are clean and quiet. Drinks are available to patients right when they walk in. It’s an accessible form of concierge medicine.

What’s more, One Medical built its entire business around making everything flow through its software app. To set an appointment, all patients need to do is click a few buttons on their phone. Then the app will send them periodic appointment reminders.

And here’s the best part…

Medical records are available right there through the app as well. That’s right – patients have their own records and medical history with just the click of a button. How’s that for a perk? The system was designed to be customer-facing – a novel idea, right?

And the app even integrates with insurance providers. This helps automate the billing and claims process. Simply put, One Medical represents what health care should look like.

With that picture in mind, it’s easy to see how this is the perfect acquisition for Amazon.

If we remember, Amazon bought online prescription medicine company PillPack for $750 million back in 2018. This gave Amazon the ability to deliver prescription meds right to our doorstep.

And earlier this year, Amazon said that it wanted to go to the next step. It decided to open brick-and-mortar clinics in metropolitan areas across the U.S.

Originally, Amazon planned to build out its clinic network from scratch. But if we look at what One Medical has done, it’s the perfect fit. Amazon will take the startup’s existing infrastructure and scale it out into a nationwide network of clinics very quickly.

So this is another smart acquisition by Amazon. Now it’s got physical clinics, telehealth services, and the ability to ship prescription meds right to the home. It’s quickly becoming a dominant force in the health care space.

And if I think about Amazon’s access to data both from its own e-commerce platform and its Whole Food stores… theoretically, doctors could have a snapshot of their patients’ lifestyles and dietary habits based on their purchase history.

That certainly opens up some privacy concerns. But there’s no doubt this information could improve a physician’s ability to care for patients and provide specific guidance.

Amazon has had great success with its Whole Foods acquisition, so it makes perfect sense to do the same with healthcare, having a higher-end offering – compared to Walmart having its own in-store clinics and pharmacies.

This consistent strategy will likely be well received by customers, and assuming it scales well, will improve the quality of healthcare clinics… something that has long been in need of disruption.

What emerged from Diem’s wreckage could be a crypto powerhouse…

Regular readers likely remember Facebook’s Diem project. This was Facebook’s attempt to build a stablecoin that could facilitate transactions across all its platforms – including Facebook, WhatsApp, and Instagram.

It was certainly a promising project at first. But regulators quickly realized that having a global reserve currency would give Facebook far too much power. This created a lot of backlash from regulators and governments. Facebook eventually had to sell off Diem and all its assets to an investment bank last year.

We have talked about this story from a few different angles before. But the story continues…

As we discussed back in March, several of the key software engineers behind Diem formed a new company, called Aptos Labs, at the end of last year.

The startup raised $200 million in venture capital (VC) at a $1 billion valuation right out of the gate. That’s when I said it was one to keep our eye on.

Well, Aptos Labs just went back to the well. It completed a $150 million VC round that values the company at $2.3 billion.

So a company that formed less than a year ago has already raised $350 million… And is now worth more than $2 billion. That’s nearly unheard of.

And we now know that Aptos is working on a layer one (L1) blockchain. It’s designed to provide fast and cheap daily transactions, presumably using a stablecoin. So this is a project that is designed to compete with Bitcoin and Ethereum.

Five months ago, I was very curious to see what Aptos Labs would be up to. Today, I can say that this is absolutely a company we need to add to our early-stage watchlist.

Given the experienced team and all of the VC money pouring into it, Aptos Labs could quickly become a major player in the crypto space.

The rise of venture debt…

I’m seeing an interesting dynamic play out in the VC space. A very material shift is happening right now… And there’s one financial technology (fintech) startup set to capitalize on it.

That dynamic is the compression of valuations for venture rounds. That simply means that the VCs are assigning a lower enterprise value to the private companies they are backing.

This is very much a lagging indicator. It’s the industry’s way of catching up to the economic uncertainty we’ve been dealing with.

And I should point out that this valuation compression is happening mostly with the large, late-stage VC deals. These are the well-established private companies that are gearing up to go public. We aren’t seeing this happen nearly as much with the smaller early-stage rounds.

Still, this has caused a dramatic shift toward venture debt, sometimes called venture lending. This is where a private company borrows money against future revenues… It’s a way to raise capital without issuing new shares.

Historically, private companies would go to large banks to raise venture debt. And as we would expect, the banks typically require relatively high interest rates on these loans to match the risk.

However, an innovative startup called Pipe is quickly becoming the venture lender of choice in the private markets.

Pipe has developed technology that automates nearly the entire process. It uses machine learning to assess a company’s revenues, gross margins, and cash flows… and uses this data to determine creditworthiness.

This enables Pipe to approve lending quickly. It can give borrowers a “yes or no” answer, and Pipe can propose an interest rate based entirely on the data.

For comparison, banks require founders to provide an enormous amount of documentation to start the loan process. Then, they often take weeks – or even months – to decide on the loan. And the interest rate isn’t likely to be custom-tailored to the applicant.

Clearly, Pipe’s tech simplifies the venture lending process for founders and private companies. And with the venture debt markets booming right now, this is absolutely a company to keep an eye on.

In fact, what Pipe is doing today reminds me a little of what Square (now Block) did with its Cash App several years ago. And as regular readers know, Square is one of my favorite fintech companies.

Needless to say, Pipe could be a great investment target down the road. Let’s add it to our early-stage watchlist as well.