I want to take a minute to thank everyone who joined me for our State of the Tech Market strategy session last night. We had a fantastic turnout.

This is a tricky market environment to navigate, and it was a chance for me to share my thoughts about what we’re all experiencing right now. And for those who weren’t able to join, I’d like to encourage you to catch the replay.

The current environment has shifted sharply to inflation… worries about future interest rate hikes… geopolitical conflict… and more. Some even believe we’re heading into a recession.

And as investors, we need to adapt to the changing environment. That’s why I presented on our strategy here at Brownstone Research last night.

And as those of you who attended know, there’s a key investing method that is inflation-proof… crash-proof… and recession-proof. I want each of my readers to have the chance to learn about it.

In my experience, this is one of the best ways to create generational wealth… and to show you how, I shared the name of one promising company at our strategy session.

If you have any money in the markets – or if you’re worried about where the markets are going from here – you might benefit from setting aside a bit of time to catch up right here.

The replay will only be online for a brief time. And this is not something you want to miss.

The battle of the billionaires continues…

Amazon just made a huge announcement this week: Its Project Kuiper secured as many as 83 rocket launches from three different service providers.

Clearly, Jeff Bezos is rushing to catch up with Elon Musk on the space front…

As a reminder, Project Kuiper is Amazon’s satellite internet service. The goal is to launch about 3,200 satellites to provide internet access to underserved areas around the world.

Kuiper is Bezos’ answer to Elon Musk’s Starlink constellation. But just as Blue Origin is way behind SpaceX on launch capabilities, Kuiper is way behind Starlink. Starlink has already launched more than 2,000 satellites and has permission to launch as many as 12,000.

That’s why Amazon is rushing to lock down as many launch contracts as it can. It has launch deals in place with European aerospace company Arianespace, United Launch Alliance, and – not surprisingly – Bezos’ own Blue Origin.

Collectively, this is the largest procurement of launch services in history. 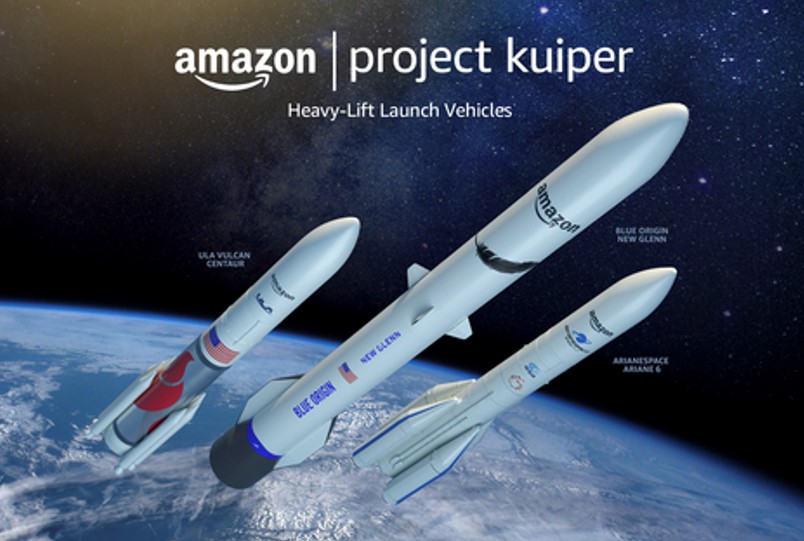 We may wonder – why didn’t Bezos encourage Amazon to award all the launch contracts to Blue Origin? Why share the wealth? He could have given much-needed revenue to Blue Origin.

The answer is simple: Blue Origin hasn’t completed a single payload launch using its New Glenn rocket yet. Originally slated for a first launch in 2020, New Glenn has been delayed a few times and is now expected to launch in 2023.

Blue Origin clearly needs time to prove its technology and build out the infrastructure necessary to support commercial launches.

That’s why Amazon is roping in Arianespace and United Launch Alliance as well. We don’t have an official date yet for when the first launches will happen, but we can be sure that Amazon will push forward as quickly as possible.

The company is already positioning Project Kuiper as a more affordable service compared to Starlink’s satellite internet service. No doubt Amazon will price its service under Starlink’s $150 per month price point.

But Amazon has to move fast for this pitch to work. Once consumers have paid for and installed Starlink’s hardware, they are much less likely to switch to Kuiper.

That said, this kind of competition is great for consumers.

The competition will force both Starlink and Kuiper to offer better pricing and provide better service to attract and keep customers… That’s good business.

So this is an exciting development for the next generation of satellite-based broadband internet. While Musk has an enviable competitive position right now, let’s hope that Bezos is also successful in getting his network deployed.

The next generation of AI will out-negotiate humans…

We just saw another major milestone in the field of artificial intelligence (AI).

A small company based in France called NukkAI announced that its AI, NooK, beat eight world champions in a game of bridge.

I’m sure some readers are thinking – bridge is just a card game. How can this be such a major development? After all, we have already seen AI beat grandmasters at both chess and Go.

Here’s the thing – bridge presents an interesting challenge that chess and Go do not.

In both chess and Go, players have all the information in front of them. They can see the game board and where all the pieces are. All they need to do is calculate the highest-probability moves for success. AIs can do that rather easily.

With bridge, all players are dealing with imperfect information. They don’t know what cards the other players are holding. Nor do they know when a player is likely to play a given card.

What’s more, bridge players need to communicate with their partners for the best results. This often includes subtle, nonverbal communications. This is difficult for an AI to do.

As a result, bridge players must think strategically. But they also need to adjust their strategy in real time based on what’s happening in the game.

That’s why this is such a breakthrough. NooK is the first AI to master this kind of strategic thinking based on imperfect information and unpredictable actions.

Also of note, NooK employed what’s called a “neurosymbolic” approach. That’s a fancy term that simply means the AI can explain its actions. In this case, NooK could explain exactly why it played each card when it did.

This is in stark contrast to the neural network technology that we use in our new AI trading service Neural Net Profits.

Neural networks are a dark art of sorts… The AI processes an incredible amount of data to determine what is most likely to happen in the near future. Then it makes decisions accordingly.

Of course, this approach is fine for a trading service. After all, we’ve designed the AI to produce the optimal output which is the most profits – we are less concerned with how it does that.

Said another way, the most important thing to us is that it is consistently giving us high probability predictive signals… What’s important is that it’s right. (You can learn more about this service here.)

But there are many other times when decisions would benefit from an explanation. Bridge is one of them, but that’s small potatoes. To me, this has far wider implications.

If we think about complex human interactions, geopolitics is a great example.

Intense negotiations are going on between Russia and Ukraine right now. That’s a situation where all parties involved are dealing with imperfect information. And the information held by one party may be inconsistent with that of another party.

Still, each party must be able to clearly explain their decisions and positions.

Well, we could apply NukkAI’s technology to any situation involving this kind of dynamic. One day soon, we can expect AIs like NooK to be able to negotiate with humans at a level that’s far superior to what most negotiators can do today.

Or an AI like this might be able to predict certain outcomes from situations where not all information is available. Technology like this could be applied to business, politics, science, gambling, and many other things.

The first all-private crewed mission to space is happening tomorrow…

Big news – Axiom Space is partnering with SpaceX for its first crewed mission to the International Space Station (ISS). And it’s all happening tomorrow.

The first step is to launch modules of the space station and attach them to the ISS. Then, when the ISS is decommissioned in the coming years, Axiom’s space station will stand alone. It will serve as somewhat of a private replacement for the ISS.

Axiom’s launch tomorrow is a major milestone toward this vision.

Tomorrow’s mission is AX1. A four-person crew will make the trek to the ISS in a SpaceX Crew Dragon capsule. It will be a 10-day trip in total – two days of travel plus eight days at the ISS.

Interestingly, three of the crew members are paying customers. They ponied up $55 million for the trip… Yet they aren’t just going up for the experience.

They will spend at least 100 hours doing experiments in space. This list includes things related to astrophysics, agriculture, and some biology and health-related items.

For example, the crew will do experiments on how being in space affects human cells, including cancer stem cells.

The team will also test out a device from Japan that uses light to convert gases into water and carbon dioxide. If it works, that would certainly be a handy tool for any space-faring civilization.

And this last one is especially interesting to me… The crew will experiment with technology that creates swarms of small self-assembling robots.

This tech comes out of the Massachusetts Institute of Technology (MIT). We could use these swarms of robots for construction in space. This will be critical if we want to have outposts in space.

Right now, we have to construct space modules on Earth and then launch them up into orbit. These launches take an incredible amount of energy and expense. Escaping the pull of Earth’s gravity is the hardest part.

Yet plenty of raw construction materials are already available in space. For instance, asteroids contain all kinds of metal.

It would be far more efficient if we could mine these materials in space and then use them in construction. That’s the end goal… And these self-swarming robots could play a vital role in that process.

So I’m incredibly excited about the AX1 mission that launches tomorrow. We’ll wish the crew a safe and successful mission.