As painful as it must have been to make the call, Verizon made the right decision.

It finally agreed to sell off its media assets to private equity powerhouse Apollo Global Management for $5 billion. This sale includes its central holdings in this space – Yahoo and AOL.

It was a tough decision as Verizon spent several years and about $9 billion acquiring Yahoo and AOL. These media properties eventually became the core of a division known as Oath.

This comes on the back of a $1 billion loss on the sale of Tumblr, another one of its misplaced investments, back in 2019.

In short, Verizon’s media strategy has been an absolute disaster.

As a telecommunications company, Verizon had no idea how to manage, grow, and leverage aging media properties that had been on the decline for years.

Yet it fell for the luster of shiny objects and a dream that it could become more than just a great wired and wireless network provider.

This is a common mistake, and it’s a hard one to correct. But Verizon’s board made the right call. It took the write-down, admitted the mistake, and sold off the assets so that it could focus on its core business… The thing that Verizon is really good at.

And right now, Verizon’s focus is entirely on building the best performing 5G wireless network in the U.S. It took a firm stand in the last round of C-band spectrum auctions, which revealed its robust network architecture strategy.

The core of its network will be built nationwide in the high-performance, C-band spectrum. That will deliver both lower latency and much higher speeds than 4G.

And its C-band network deployment will be aggressively supplemented with the 1 Gbps+ speeds of its mmWave network, which it has been building out in more population-dense areas.

Being the best in 5G wireless networks is a great strategy. Doing just the one thing well will make the company successful for the rest of this decade.

And it will put Verizon in a strong position for the inevitable 6G wireless technology that we’ll be excited about when 2028 rolls around.

I know that 6G might feel like it’s a long way off, but it will be here before we know it.

While Verizon has amassed an impressive debt load of about $180 billion, it has gross margins above 60%.

And it will throw off about $18 billion a year in free cash flow for the next three years. This is more than enough for Verizon to manage the cost of its debt, invest in building out its 5G networks, and even pay a dividend of 4.24%.

Where things get really exciting is when I look out to 2024 and 2025. That’s when the majority of Verizon’s 5G network spend will be completed, and we can expect Verizon’s free cash flow to increase.

Now Verizon isn’t the kind of high-growth company that I normally recommend.

But if I had an investment research product focused on income generation through dividends with limited downside and an expectation for modest capital gains… Verizon would certainly be worth a look.

Checking back in on NASA’s Artemis program…

We last talked about NASA’s Artemis program back in February. That was when SpaceX won the $332 million contract to launch its Lunar Gateway system.

To bring new readers up to speed, Artemis is the program that outlines NASA’s plan for establishing a manned presence on the Moon. And the Lunar Gateway is the new space station that will orbit the Moon. It will serve as the command center for the operation.

With the Lunar Gateway contract awarded, that leaves just one element of the project to be put in place – the human landing system. This is the system that will take astronauts from the Lunar Gateway down to the lunar surface.

If we remember, NASA invited three companies to compete for the human landing system contract. That was back in May of last year. The three companies were Elon Musk’s SpaceX, Jeff Bezos’ Blue Origin, and a legacy aerospace firm called Dynetics.

Well, NASA just chose SpaceX to fulfill this part of project Artemis as well. And get this – the contract is worth $2.89 billion. That’s a big win for SpaceX.

SpaceX’s Starship will be the vehicle facilitating the human landing system. This is the same Starship that SpaceX has been quickly iterating and launching from its Boca Chica, TX launch facility without a booster. We previously covered how SpaceX was able to land it vertically with an innovative “bellyflop” maneuver.

And here’s where it gets really exciting. The Starship will be able to land in the designated spot on the Moon, carrying astronauts down safely. Then it will take off to explore other parts of the lunar surface.

Rendering of SpaceX’s Starship on the Moon 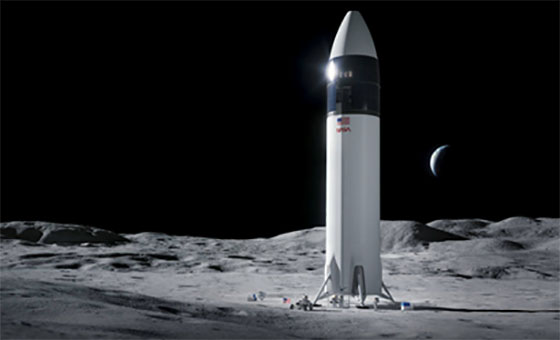 This ability to land and then take off from anywhere without a booster, essentially “hopping around” the moon, will enable the astronauts to do some critical research covering a lot of the lunar surface over the course of a week.

They will be looking for good areas to build a habitat module and lunar base. They will assess the potential to mine for water at certain sites. And they will generally get a feel for what a manned presence on the Moon should look like.

Then the Starship will take everybody back up to the Lunar Gateway once the research is done.

And SpaceX confirmed that it will be ready to do all this by 2024, which meets NASA’s timeline. Given the pace of improvements that SpaceX has demonstrated, this is a very actionable program in a realistic time frame.

So this is a very exciting development. We’re now about three years away from putting boots on the Moon once again. This is the next chapter in space exploration.

One of my favorite AI semiconductor companies is on the rise…

We first talked about early stage company Cerebras back in August of 2019. That was when Cerebras released its first-generation product. And it happened to be the largest semiconductor in history.

What I love about Cerebras’ product is that it is specifically designed to optimize artificial intelligence (AI) and machine learning (ML) software. And the company took a unique approach in doing so.

Cerebras didn’t go that route, however. The company took the big wafer and made one semiconductor out of it. That makes it perfect for data centers where intensive AI/ML software is being run.

And Cerebras just announced its second-generation product – the Wafer Scale Engine 2 (WSE2). It uses the same approach and is the same size. But the new chip will have a massive jump in performance. 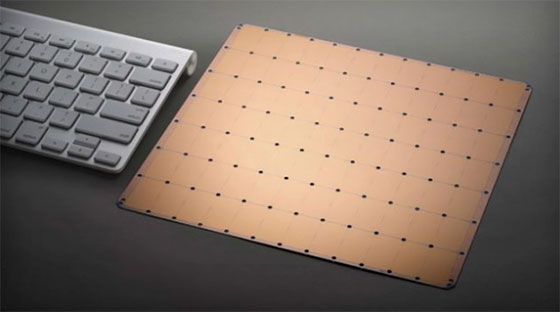 Cerebras’ first-generation semiconductor was designed using the 16 nanometer (nm) semiconductor manufacturing process. That wasn’t bleeding-edge technology, but it was the safe choice at the time. 16 nm allowed Cerebras to maximize yield without sacrificing quality.

Well, the second-generation chip is designed using the 7 nm semiconductor manufacturing process. This is several generations after 16 nm, which is why there are such incredible performance gains.

While the most advanced chips are being manufactured at 5 nm right now, the yield at 7 nm is most suitable for making a wafer-scale semiconductor like WSE2.

Cerebras’ new product has an almost unbelievable 2.6 trillion transistors on the single semiconductor. We can compare that to NVIDIA’s A100. It’s an incredible product, but it only has 54 billion transistors. And remember, the A100 just beat 16 world performance records last year.

So we’re talking about a chip with memory bandwidth that is 12,000 times greater than the A100 here.

What’s more, it has 850,000 cores. To put that in perspective, the average high-performance laptop has four cores. So this product essentially contains 212,500 high-performance computers on a single chip. Talk about a game changer.

And perhaps the most impressive part is that Cerebras did not need to tweak its architecture at all from its first-generation product. That’s incredible.

Typically, semiconductor companies get customer feedback after launching their first-generation chips, and then they adjust their architecture to address weaknesses.

Cerebras didn’t have to do that. It appears to have gotten it right the first time.

So I’m now even more excited about this company than I was when we first profiled it two years ago. This product will be most useful for extremely computationally intensive AI/ML tasks in large data centers.

We should think of it as a complement to products like NVIDIA’s A100, which will be perfect for less computationally intensive tasks. This will only accelerate the pace of development in artificial intelligence.

We’ll wrap up today with an update on Amazon’s Project Kuiper. This is Amazon’s satellite internet service that will compete with SpaceX’s Starlink. And the competition is getting heated.

When we first profiled Project Kuiper, Amazon was still testing the antennas and hardware. The company was making good progress, but it hadn’t yet made plans to get its satellites into orbit.

But a couple of weeks ago, Amazon secured an agreement with the United Launch Alliance (ULA) to deploy its satellites on ULA’s Atlas V rockets. Here’s one in action: 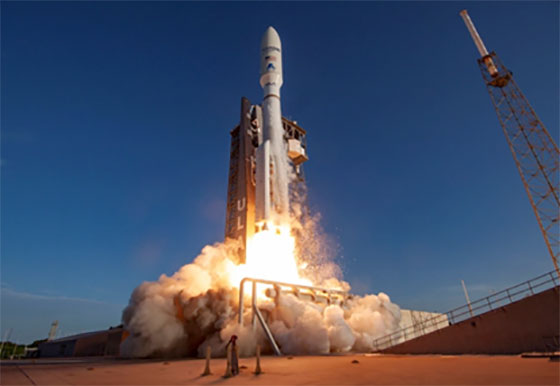 This is a great choice. The Atlas V rockets have already been used in 85 successful missions. They are part of a well-established launch service.

And given the rivalry between Musk’s SpaceX and Bezos’ Blue Origin, I wasn’t expecting Amazon to select SpaceX for launch services.

These ULA rockets will be the vehicles that deploy Project Kuiper’s goal of over 3,200 geostationary satellites in low Earth orbit. They will provide satellite internet coverage to geographic areas around the planet where Amazon has a strong presence.

Per Amazon’s Federal Communications Commission (FCC) agreement, it must deploy the first 1,600 satellites by 2026 in order to maintain its license. So there’s a little bit of time pressure at play.

For that reason, I expect we’ll see Project Kuiper’s first launches happen in the coming months. And Amazon has already committed about $10 billion to make this happen.

One thing is clear… With $73 billion in cash and the expectation to generate another $32 billion more in free cash flow this year, Amazon has the money to make Project Kuiper a reality.

Once live, Amazon’s satellite internet service will give consumers another option besides Starlink and the legacy incumbent HughesNet. This will provide great competition, better quality of service, and keep prices reasonable for a satellite-based service. That’s always a good thing for consumers.

So this will be fun to watch. We’ll continue to follow the progress of both Project Kuiper and Starlink in these pages.

P.S. Cerebras isn’t the only company making waves in the AI industry today. In fact, I am incredibly excited about what’s known in the industry as a “Convergence” that’s happening around one small-cap company right now.

This convergence is happening at the intersection of AI and the biotechnology industry. And it’s enabling this one company to completely change the game. This company is applying bleeding-edge AI to biotech research to discover cures for some of the most pressing diseases known to man, including cancer.

This confluence of AI and biotechnology is going to radically disrupt the medical industry. And it’s going to unleash an avalanche of wealth for smart investors in the process.

For more on this story and the company at the heart of this AI-to-biotech revolution, just go right here for my full presentation.