Today, let’s have a look at my “adopted” country, Japan, and COVID-19. Its unique characteristics make it a fascinating case study for the pandemic.

I lived in Japan for nearly 20 years as a corporate high-tech executive, running large businesses there and throughout the Asia Pacific region. It was an amazing experience that had a profound impact on my own personal and professional development.

I’ve worked in and traveled to more than 65 countries, and I know of no place on earth that is more civil, organized, and compliant to government direction.

Remember that it isn’t unusual to wear masks when we are sick in Japan in order to avoid the spread of the illness. But we don’t wear masks because we are scared of becoming infected by something. Many foreigners misunderstand this when visiting Japan for the first time.

Of course, since the pandemic began, the government directed everyone to wear a mask, and Japan’s society complied.

The Centers for Disease Control and Prevention (CDC) has said masks prevent the spread of COVID-19. But rather than accepting that at face value, let’s look at what happened in Japan.

Since everyone has been wearing a mask since the beginning of the outbreak, we might expect there to be little to no COVID-19 in the country, right?

Japan experienced an initial outbreak between March and May, similar to many countries in the northern hemisphere, with a corresponding dip upon entering June. Japan did close down its schools several weeks in advance of its April break, but otherwise much of the country went about its own business… masks and all. 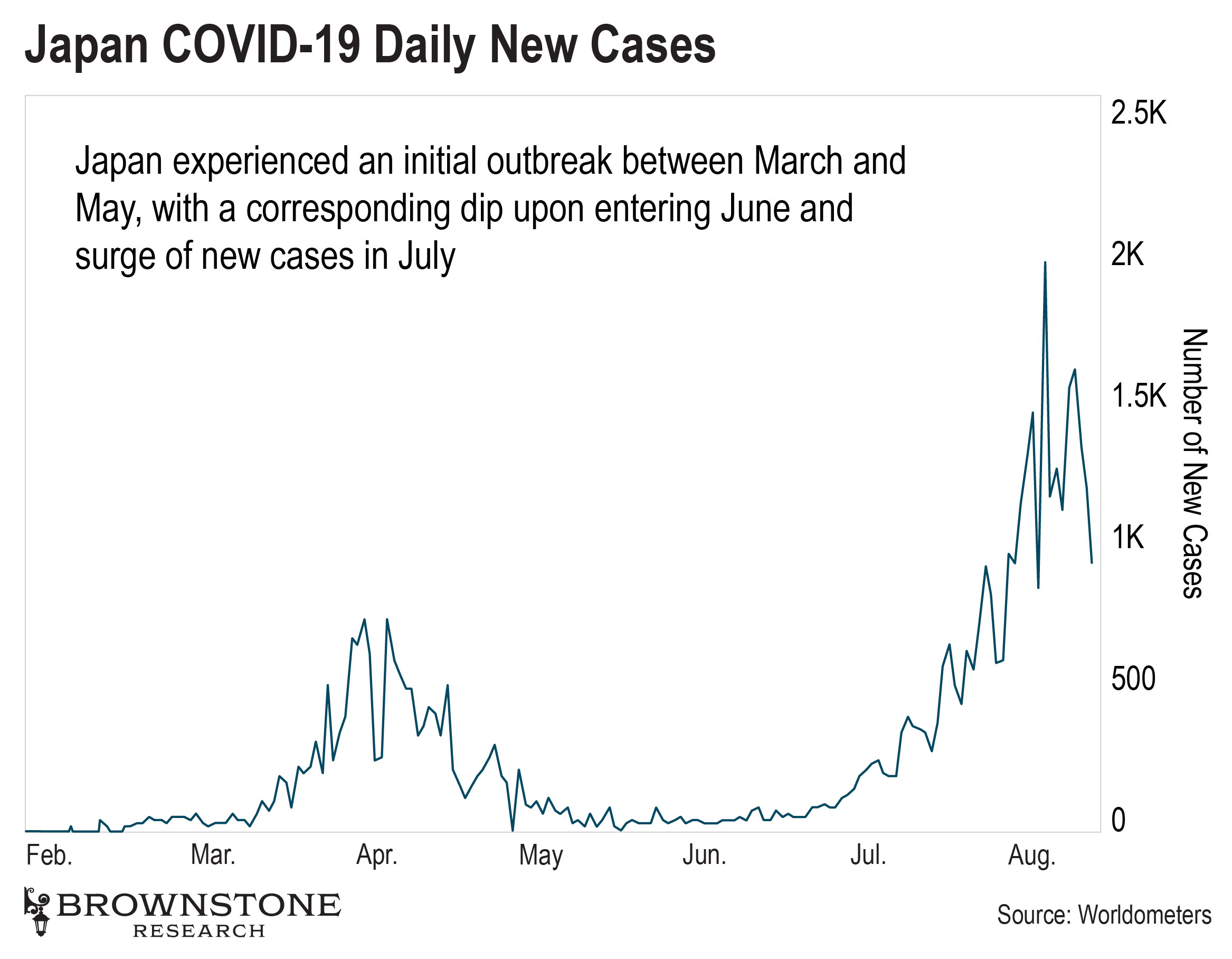 It appeared that the virus had run its course, which the Western world attributed to the compliance of wearing masks.

And then, in early July, the new cases came back with a vengeance, peaking about a week ago. What happened?

In short, the masks clearly didn’t stop the spread of COVID-19.

And how about Japan’s COVID-19-related deaths?

The impact has been minuscule. During July and August, there were rarely more than five deaths a day from COVID-19. On some days, there have been none. 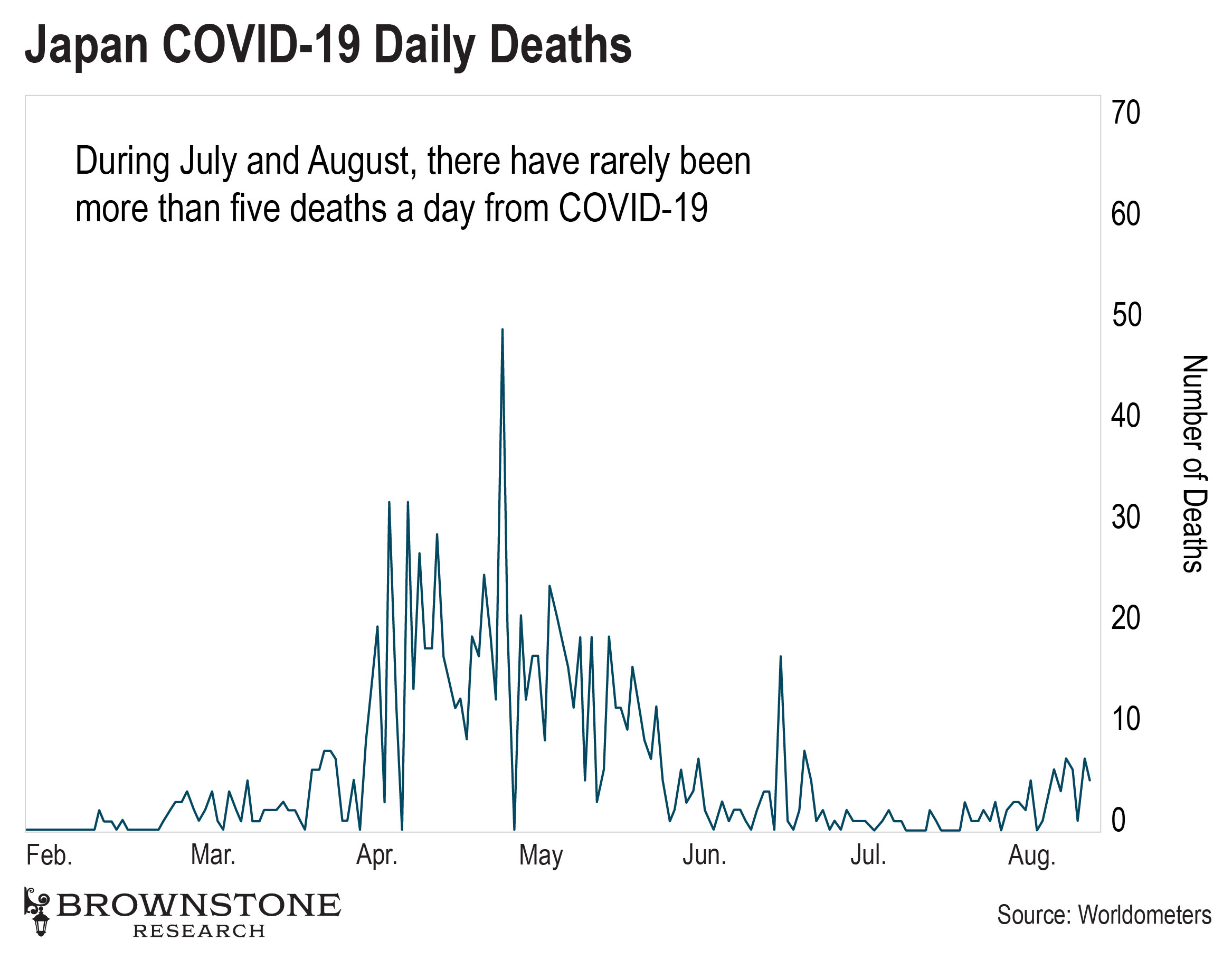 Since July 1 in Japan, there have been more than 30,000 new cases of COVID-19. But almost all of the 80 deaths during that time involved underlying health conditions and higher risk due to age.

That amounts to a fatality rate of 0.26%. And remember, that rate doesn’t include asymptomatic (symptom-free) cases. The actual fatality rate would be a small fraction of that number if those cases were included.

Why is the fatality rate so small? There are two primary reasons.

First, Japan’s health care system learned a lot about how to treat COVID-19 patients during the first wave of COVID-19 (March through May). This prepared the country’s system to deal with its much larger outbreak this summer.

And second, Japan is only counting deaths directly attributable to COVID-19, unlike the U.S.

Some recent COVID-19 “deaths” from just one county in Florida include:

In fact, a recent news report that examined 581 “deaths” from COVID-19 in Palm Beach County, FL, determined that only 169 did not have comorbidities. That’s only 29% of the total.

And this problem of reporting COVID-19 “deaths” exists across the U.S.

Japan provides us with a far more accurate picture of what is really going on with COVID-19. And it demonstrates how, regardless of masks, an airborne virus like COVID-19 will likely continue to spread until we reach a state of herd immunity.

Even New Zealand, which went 102 days without a new case of COVID-19, has just identified four new cases in a family that didn’t travel anywhere.

But COVID-19 didn’t go into hiding during those 102 days. It was simply spreading slowly – probably asymptomatically – throughout the country during that time.

We can slow down the spread at great cost to economic and personal life, but we cannot stop the spread entirely. COVID-19 is going to do what it does best… spread.

Now let’s turn to our insights for today…

The results are in on AI semiconductor testing…

Back in May 2018, the major players working on a form of artificial intelligence (AI) called machine learning (ML) created benchmarks to test the performance of semiconductors running ML tasks.

Machine learning helps computers improve automatically through experience without being explicitly programmed. The suite of benchmarks is known as MLPerf, and it quickly became the gold standard for the evaluation of hardware in the industry.

Well, just days ago, we got the results back from the most recent MLPerf test. And regular readers won’t be surprised to hear that NVIDIA’s new Ampere A100 AI chip destroyed the competition.

We talked about the A100 back in May. It has 54 billion transistors on a single chip. And it can run at five petaflops, which means it can do five quadrillion operations per second. A quadrillion is 1,000 trillions. It’s hard to wrap our heads around a number like that.

At the time, I said that the chip was an absolute powerhouse – and it just proved that statement true. NVIDIA’s A100 broke 16 world performance records in MLPerf testing. It was a clean sweep across a broad spectrum of ML benchmarks.

Google’s TPU (tensor processing unit) chip also did well in testing, but it didn’t come close to the A100.

But there was one noticeable absence from the competition…

Intel was nowhere to be found. That’s surprising given the fact that Intel spent over $2 billion to acquire Habana Labs late last year – an early stage semiconductor company focused on AI. After all that money, it has nothing to show for it?

The fact that Intel chose not to test any of its chips has one likely explanation – they would not have shown very well.

Also absent from the competition were several promising early stage companies that we have profiled here in The Bleeding Edge: Graphcore, Cerebras, and SambaNova.

As a quick refresher, Graphcore’s chip has even more transistors than NVIDIA’s A100. Cerebras built the world’s largest chip optimized for AI. And SambaNova is developing what it believes will be the world’s best graphics processing unit (GPU).

It’s not an exaggeration to say that these companies are the future of computing. And there’s a simple reason why they didn’t participate in these benchmark tests. Their chips aren’t mass-market products yet. But they will be soon.

The next MLPerf competition will likely happen within the next four to six months. I’m excited to see if any of these three early stage companies participate. I can’t wait to see their products in action.

And looking forward, these three companies will make excellent investment targets when the time is right. We’ll continue to track them closely in these pages.

State-backed theft and money laundering in the digital asset space…

We just got an interesting insight into how North Korea “raises” capital to fund government projects.

According to a recent U.N. report, state-backed cybercriminals stole about $1.5 billion in cryptocurrency “altcoins.” These are smaller, lesser-known cryptocurrencies compared to Bitcoin and Ethereum.

Once stolen, the cybercriminals run the altcoins through a “mixer.” This is a service that mixes the coins with those of other users so that the coins they put in are not the same coins they get out. That makes them harder to track.

Then they move the altcoins to a loosely regulated digital asset exchange and convert them to cash. That cash is reportedly used to fund government programs, including North Korea’s nuclear program.

This is essentially money laundering but with digital currencies.

And according to analysts at FireEye’s Mandiant Threat Intelligence division, North Korea’s cybercriminals have a critical advantage that most other criminals don’t have – they are state-backed.

Once they convert the altcoins to cash, they don’t have to worry about bringing the funds back “onshore.” The North Korean government supports them. That makes them very good at what they do.

But it’s not all bad news. There are two takeaways here…

First, it is a misconception that cryptocurrencies can’t be traced. On the contrary, most can be tracked.

Public addresses make it possible to see how cryptocurrency funds are moving. And advanced software has been developed specifically to track cryptocurrency transactions. So bad actors like this aren’t avoiding detection even when they think they are using “untraceable” altcoins.

And the second takeaway is that digital asset use for illicit purposes is not widespread in the industry. White hat cybersecurity analysts have demonstrated that most of the shadowy activity in the space is tied to state-backed cybercriminals like this.

The reputable projects in the digital asset space, on the other hand, are fully compliant with the laws and regulations in their locale.

Hopefully, that will encourage officials to create a friendlier environment for cryptocurrencies and digital assets here in the U.S.

Sadly, the U.S. regulatory environment still has a lot of work to do in this space before it is welcoming to investors wanting to participate in capital formation. That’s what’s truly needed to help this industry grow and thrive.

Apple has been working behind the scenes to move more of its iPhone production to mainland China. The company has even been working with its Taiwan-based suppliers to facilitate this.

This comes at a time when the rest of the West has been scrambling to move supply chains out of mainland China. We have talked about that trend quite a bit in these pages. Plus, it appears that a new “trade war” between the U.S. and China is heating up again.

So what is Apple thinking here? Instead of moving production out of China, it is looking for ways to move production into China.

Although it appears contrary on the surface, Apple sees the same decentralized manufacturing trend that I have been writing about. In fact, this confirms that there is a clear split in manufacturing happening right now.

By doing this, Apple avoids the tariffs and taxes required to import goods into China. And it strengthens its relationship with its Chinese suppliers and, by extension, China’s government.

As I spent much of my time as a corporate executive in Asia, I am quite familiar with this strategy.

You go to your suppliers in China and basically say, “Look, we are not involved in the politics between the U.S. government and the Chinese government. We are committed to investing in the country and producing products for the Chinese market in mainland China.”

It’s a smart move that we are seeing other tech companies make as well.

We talked on Monday about how Tesla is partnering with Chinese-based battery producer CATL. And, of course, Tesla built an advanced manufacturing facility it calls a Gigafactory just outside of Shanghai for just this reason.

This is the decentralized manufacturing megatrend in action.

To be competitive in the 21st century, companies will return to making products close to the markets in which they will be sold. That reduces shipping costs and avoids the punitive tariffs that make foreign companies less competitive. And it returns jobs to regions and countries that were long thought lost forever.

And it’s part of the reason that we’re on the cusp of a manufacturing renaissance here in the U.S., as companies realize the value in simplifying supply chains and benefiting from keeping manufacturing close to the U.S. market.

That’s right. Manufacturing is already coming back to America. And that is a great thing for investors who are investing in companies traded on U.S. stock markets. A thriving economy with more jobs and growth only results in more fantastic investment opportunities.