Markets have been like riding a rollercoaster lately. And some of us may feel sick to our stomachs as a result. I’ve certainly felt that as well.

But there has been one part of my portfolio that hasn’t felt any of the pain. That’s why I’ve been drawing readers’ attention to one specific kind of investment – private investments. These private shares can offer peace of mind… and help us sleep well at night no matter what the stock market is doing.

That’s because private companies aren’t vulnerable to the whims of public sentiment or Wall Street traders. Their valuations can climb no matter what the markets are doing.

And this Wednesday, I’m going to tell investors all about how to begin investing in the private markets – even if we aren’t accredited investors.

On May 18, at 8 p.m. ET, I’ll explain why these investments are a great hedge against market volatility… and talk about one particular area of private investing I want all my readers to know about. I call these opportunities “crypto placements.” And they have all the benefits of private investing… without all the wild swings of the crypto markets.

I’d love for all my Bleeding Edge readers to join me. If you’d like to reserve your spot for free, simply go right here to do so.

I’ll see you on Wednesday night.

Quantum computing is more advanced than we know…

IBM just announced its roadmap for quantum computing development over the next three years. And the company’s projections are nothing short of incredible.

When we last checked in on IBM, the company had plans to release its 127-qubit quantum computer. That was back in February of last year.

That represents an 860% increase in qubits in just three years. Yet in terms of quantum processing power, that represents computing systems that are millions of times more powerful.

Most experts thought this pace would be impossible in the quantum space. But IBM has found a way to have multiple quantum processors work in parallel with one another. That’s how the company expects to get to 4,158 qubits by 2025. 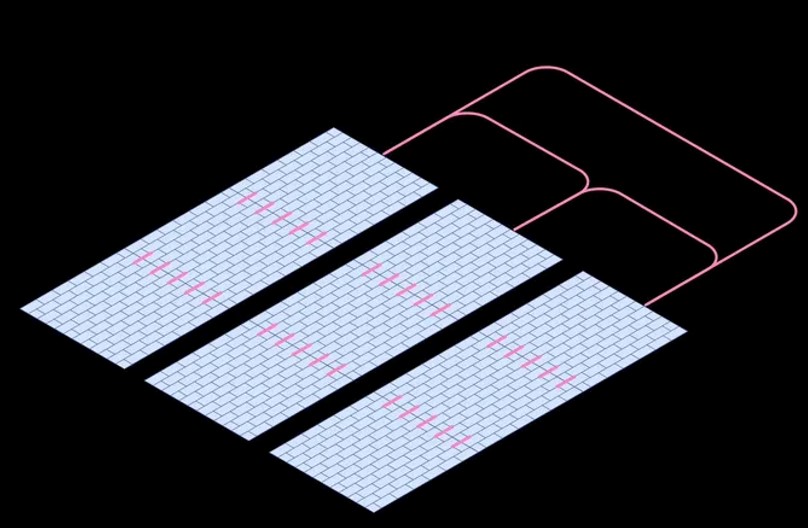 Here we can see three quantum processors linked together to work in tandem. IBM is taking a modular approach to connecting multiple processors that contain qubits, thereby dramatically increasing the capabilities of its quantum computers.

And here’s the most exciting part of the story…

IBM is not a leader in the quantum computing space. I’m sure it lags behind companies like Google, Rigetti Computing, and IonQ in terms of actual performance.

So if IBM is on track to release such advanced quantum computing systems over the next three years, I suspect these three companies are even further along… except none of them have revealed their detailed product road maps and what they are currently working on in their labs.

They have been intentionally flying under the radar, and I suspect that is to gain what will ultimately be a competitive advantage.

Simply put, the rise of quantum computing changes everything.

As I recently discussed with popular radio host Glenn Beck, advanced quantum computing will force us to completely overhaul our cybersecurity systems. It’s also the technology that will help us develop new materials and molecular compounds for things like energy production, pharmaceuticals, and electric vehicle (EV) batteries.

At the end of last year, I predicted that at least one company would release a 256-qubit quantum computer this year, and that we’d see breakthroughs in the quantum computing industry. 2022 is already proving to be exciting, and I know we’re in for some major announcements in the second half of this year.

We talked just last week about how Apple’s Project Titan is nearing commercialization.

As a reminder, this is Apple’s secretive electric vehicle (EV)/self-driving car initiative. And it’s more ambitious than we thought…

Here’s a sketch from the patent: 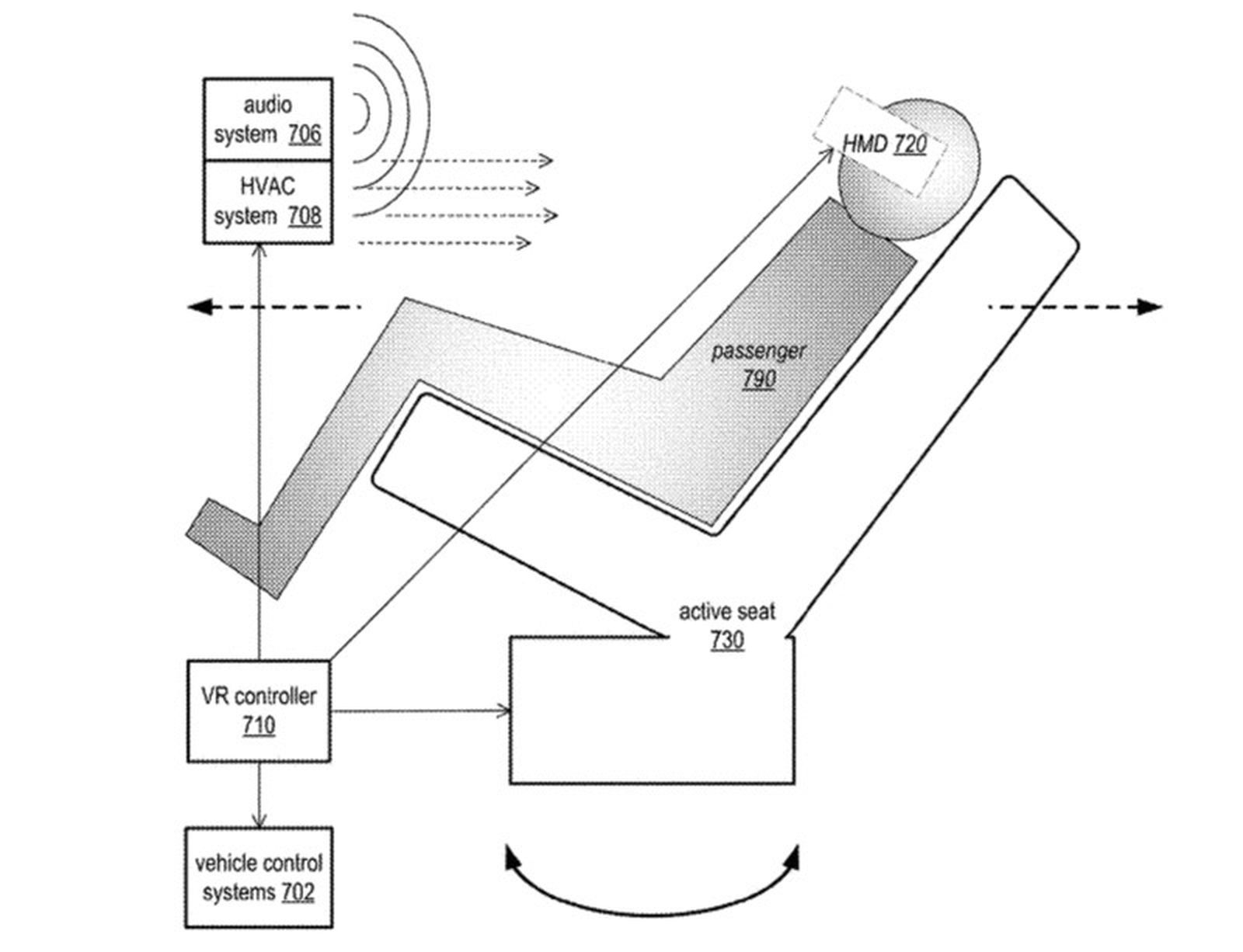 As we can see, Apple will integrate a VR system directly into its car design.

Passengers will be able to tilt their chairs back and pop on the VR headset. Then they can either enjoy entertainment or do something productive, like taking a work meeting.

I can imagine Apple having a suite of travel-related VR apps where passengers can look outside the window and see different landscapes even though the car is in a dense urban environment.

And Apple takes it a step further than the basic VR experience.

The patent also envisions the VR system working in conjunction with the car’s audio system, heating and air system, and even the seat itself. These systems will perform certain functions autonomously to enhance the passenger’s VR experience.

For example, imagine the passenger is engaged in a VR experience that simulates sailing. This could trigger the car’s air system to turn on and simulate a breeze blowing over the water. The VR system could also trigger the passenger’s chair to gradually tilt back and forth to simulate the feeling of being in a boat.

What Apple is doing here is patenting the user experience for autonomous transportation.

So it turns out Project Titan isn’t just about a beautiful self-driving car. Apple is very much focused on delivering a unique experience inside the car as well.

If we think about a world in which there are competing fleets of self-driving cars, each vying for customers – what sets one fleet apart from the others? It has to be the user experience.

And the user experience is what Apple is clearly looking to differentiate its autonomous cars compared to anything else in the market. I can’t wait to go for a ride.

We have been tracking the deployment of the James Webb Space Telescope (JWST) closely this year. And today we have yet another stunning update…

For the sake of newer readers, the JWST is the most complex telescope ever constructed. What’s more, it was launched to a destination about one million miles from Earth back in February.

We call its destination the LaGrange Point 2 (L2). It’s on the opposite side of the Earth from the Sun. That makes it incredibly cold, which is great for the telescope’s performance.

JWST is currently going through the calibration process. We expect the first fully calibrated images to come back as early as July.

That said, JWST has sent a few images back already. They aren’t as advanced as what we will get once the telescope is fully calibrated. But they are still incredible.

The Same Image from Different Telescopes 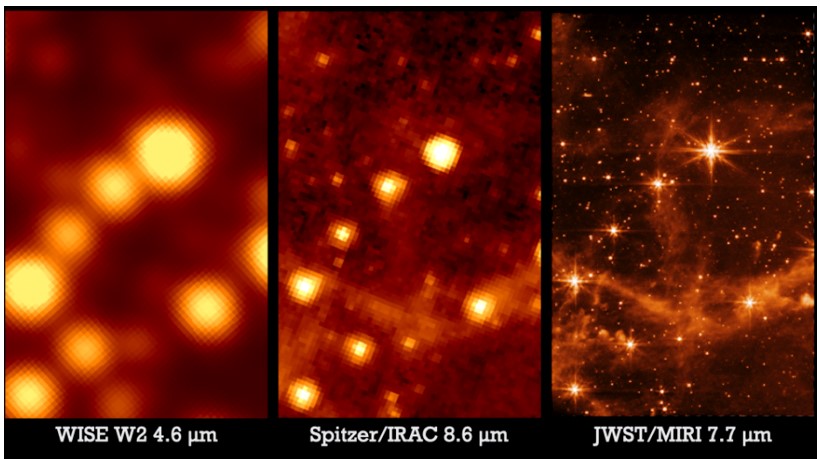 As we can see, these images are of the same objects. We can see the string of four objects from the lower left to the upper right of the image. The only difference is that different telescopes took them over the last two decades.

We are looking at images of the Large Magellanic Cloud (LMC). It’s a satellite galaxy of the Milky Way.

The image on the left is from the WISE telescope back in 2003. The one in the middle is from Spitzer in 2008. And on the right is an image just sent back by the JWST.

Here we can see just how advanced the JWST is when compared to previous telescopes. The difference in resolution is dramatic.

And think about this – JWST’s images are only going to get clearer with even higher resolution.

Here’s the most exciting part…

NASA hasn’t yet told us what the JWST’s first scientific target will be. It has been very secretive about what the telescope will focus on first.

So we can look forward to more information from NASA within the next month or two. I’m very excited to see the next images that the telescope reveals…