Before we get to today’s insights, I want to remind readers about our Investment Accelerator event taking place this Wednesday evening at 8 p.m. ET.

At the event, I am going to pull back the curtain on one of my most ambitious projects to date. We’re going to talk about a rare opportunity to join an elite group of investors for the chance to share in $1 billion in tech profits.

We will also discuss what I see as the five best investment opportunities that could 10x our money over the next five years. And we will talk about a brand-new way to use AI to get the jump on Wall Street by identifying short-term trading opportunities that no one else can see.

So please mark your calendar for our Investment Accelerator event on Wednesday, February 10. We’ll get started at 8 p.m. ET sharp. I can’t wait.

Other than watching the Super Bowl with my older son this weekend, I caught up on scientific research as I usually do.

This time, I found some fantastic research out of Norway that was published last month. The report is titled “Minimal transmission of SARS-CoV-2 from paediatric COVID-19 cases in primary schools, Norway, August to November 2020.”

I liked this report for two reasons.

First, the researchers took extra care to systematically test the children’s contacts, which improved the quality of the research.

Second, the researchers published the cycle threshold (Ct) values from the polymerase chain reaction (PCR) tests that determined if the children had COVID-19 or not.

As we have discussed in The Bleeding Edge throughout the pandemic, this sensitivity setting is one of the reasons the number of presumed transmissible cases of COVID-19 has been so grossly overstated… particularly in the U.S. and Europe.

The goal of the research was simple. The researchers wanted to determine if there was any child-to-child or child-to-adult transmission in primary schools. The children in the study were between ages 5 and 13 – basically, elementary through middle school.

As a reminder, “experts” have repeatedly told us that schools must be shut down and children must be forced to learn remotely in order to stop community spread caused by children’s interactions with one another.

Yet since last summer, research study after research study has proven that children make very little contribution to community spread. Children can catch it from an adult, but they rarely spread it to other children or adults.

And this study was no different.

In fact, among 58 adults included in the study, COVID-19 was only found in a single adult contact of the children. That represents a mere 1.7% of the adult contacts in the study. And there is no way to tell if that adult contracted COVID-19 from another source (i.e., not a child).

The other interesting thing about the data was that the Ct value at which the PCR tests found the live virus in children was generally set around 27 or lower.

This didn’t surprise me at all.

Prior research on PCR cycle threshold settings determined that settings of 26–28 are optimal to identify live virus in a patient.

And in Europe, thresholds are set between 40 and 45.

That’s much higher in sensitivity than the cycle threshold of the study in Norway. At that level of sensitivity, the PCR test will pick up dead viruses – not just COVID-19, but also other coronaviruses.

What the heck are we doing closing schools and canceling children’s sports? There is zero scientific research to support doing so.

As adults, we are causing untold levels of psychological, emotional, intellectual, and even physical damage to a generation of children.

It is time for this complete nonsense to come to an end.

And for those parents who don’t believe this research, homeschooling is always an option. I respect the right for each family to choose what they feel is best.

The rest of us can get back to an active and happy life. And we can hopefully recover what’s left of our kids’ childhoods.

We talked about how developments in quantum computing were picking up back in October.

And last week we got our first big development of 2021. IBM announced that it has made large improvements to its quantum computing software.

How large? IBM suggested that it will see performance increase by a factor of 100. In other words, IBM expects its software to perform 100 times better on its existing quantum computing hardware. That’s a remarkable jump in a single upgrade.

This is exciting. I had the opportunity to use IBM’s quantum computer when I took two classes on quantum computing at MIT early last year. Given its already strong performance, a 100x increase is quite impressive.

And even more impressive is the road map that IBM laid out for its quantum computing hardware.

IBM is on track to release its 127-qubit IBM Quantum Eagle processor this year. That’s more than twice as many qubits as its signature 27-qubit quantum processors.

Looking forward, IBM plans to have a 433-qubit quantum computer by next year. That means it expects to triple qubits from 2021 to 2022.

Here we can see clear evidence of exponential growth in terms of how quickly the power of IBM’s quantum computing road map is increasing over time.

And considering that qubits have an almost unlimited number of superpositions between 0 and 1, we can think of the increasing power of the quantum computing road map as being a double exponential function (i.e., much, much faster than plain old exponential growth).

While I’m definitely not bullish on IBM as a company, I do respect the fundamental research that IBM puts out regarding its quantum computers.

I noticed how specific IBM is about its product road map. This tells us that the company has confidence in its offerings. Hardware upgrades are becoming predictable. That’s what I am most excited about.

If IBM is putting out an impressive road map like this, I can guarantee that the innovative private firms working on quantum are seeing even more accelerated developments.

Companies like Rigetti Computing and IonQ are working at the bleeding edge of quantum computing, and they are much nimbler than IBM. I can’t wait to see their latest progress.

We’re in for a big year in quantum computing.

We first talked about Starship Technologies last April. This is an early stage company developing autonomous delivery robots in key markets. What’s unique about Starship’s robots is that they mostly stick to the sidewalk. Here’s a look: 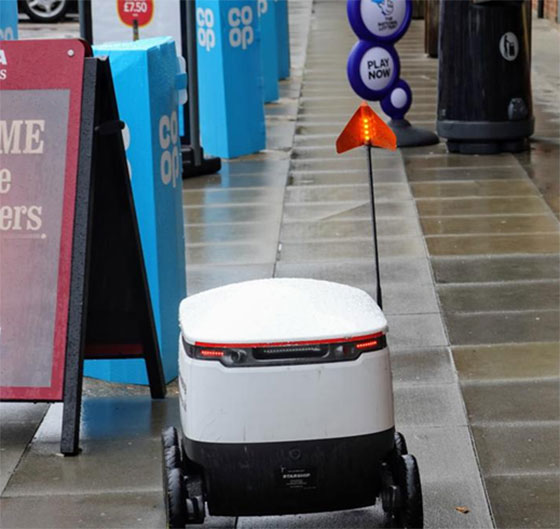 And Starship announced that it completed its one millionth delivery this month. That’s quite the milestone.

I suspect many readers haven’t seen Starship’s robots in action before. The company initially focused its deployments on college campuses, where it has a concentrated customer base more comfortable with adopting new technology.

I first saw one of Starship’s robots in action when I was on the UC Berkeley campus doing a week-long course at the Berkeley Law School. It was neat to see the little robot humming along. It was about the size of a standard cooler with a red flag sticking up. I’m told the most popular delivery items are food and our favorite coffee drinks.

With one million deliveries completed, Starship is literally one of the most successful autonomous technology companies in the world.

Its robots have successfully driven 1.5 million unmanned miles. That puts it in the same sentence as Google’s Waymo, which has logged six million miles with its autonomous vehicles. Neither company is anywhere near Tesla and its billions of autonomous miles driven, but Tesla is truly in a category of its own.

So Starship has made fantastic progress since we talked about the company last year. And I think we will soon see these little delivery robots in cities all across the country. They just make so much sense.

It’s just a matter of funding for Starship to scale up and expand into more cities.

We’ll wrap up today with a development from the world of blockchain technology that came as a bit of a surprise.

India’s parliament is presenting a bill that would ban all “non-sovereign currencies” in the country. This is largely aimed at cryptocurrencies.

Given that the population of India is nearly 1.4 billion people, this is a big deal. A cryptocurrency ban in the country could have an impact on the industry overall – especially when paired with China’s efforts to clamp down on cryptocurrencies within its borders.

China banned initial coin offerings (ICOs) back in September 2017. And in 2019, it moved to block access to all cryptocurrency exchanges – both domestic and foreign. That hasn’t completely stamped out cryptocurrencies in the country, but it has surely deterred many Chinese citizens from using them.

Of course, China has been actively supporting the development of blockchain technology. But only for applications other than transactional cryptocurrencies.

The reason for this is simple: China doesn’t want any competition for its central bank digital currency (CBDC), which the People’s Bank of China (PBOC) began testing last year.

And that’s exactly what this bill in India is all about. India’s parliament is in favor of launching its own CBDC. It wants to clamp down on competition in the country by banning private cryptocurrencies.

This is a trend that we will likely see spread to other countries around the world. And that’s concerning.

China and India together make up about 36% of the world’s population. It’s such a large number that it’s almost hard to believe for just two countries. And if more governments around the world move to ban cryptocurrencies, it could have a devastating impact on the industry.

There’s an interesting push and pull at play here. These government bans are supportive of the technology, but only on their terms. And the industry wants the freedom to innovate and decentralize, which means removing power and control from centralized governments.

Talk about being at odds…

All that being said, I see state-backed and even company-backed digital currencies as inevitable. The cat is out of the bag, the technological development simply cannot be stopped. But 99% of investors are so distracted by the arrival of CBDCs that they’re missing the bigger picture.

When these new digital currencies do arrive, they will raise the profile of blockchain technology. And investors positioned in a handful of blockchain stocks could see triple-digit returns in the years ahead.

I’ve outlined my favorite blockchain investments in a free presentation. You can watch it right here.