Van’s Note: Van Bryan here, Jeff Brown’s longtime managing editor. Regular readers know our mandate is to keep readers on the bleeding edge of the high-technology markets. A recurring theme in these pages is the budding blockchain industry. And when we find valuable insights on the crypto space, we pass it along to readers.

Today, another insight from my colleague Teeka Tiwari. Teeka’s a fountain of insight on the crypto space. He’s delivered life-changing gains to his readers and helped them navigate the so-called Crypto Winter. But now, Teeka believes that winter has thawed. And bitcoin is on the verge of a breakout. Read on… 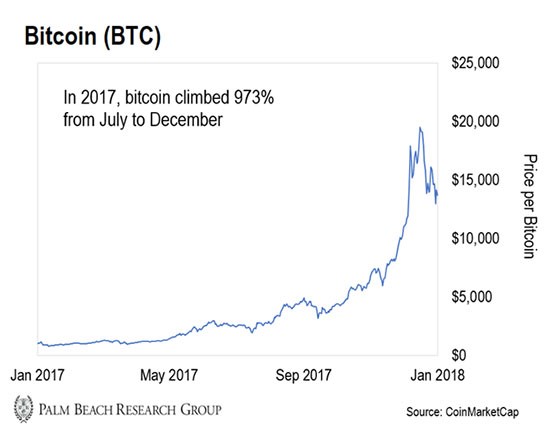 Now, bitcoin’s price has moved a lot since then. But we can still forecast where it’s headed based on the past.

So today, I’ll tell you when I expect bitcoin to reach new highs. I’ll also go over what that means for the broader crypto market – and why it’s important to get positioned now.

Every few years, bitcoin drops 80% or more – before breaking out to all-time highs. We saw this most recently during the brutal Crypto Winter of 2018.

Now, bitcoin has pulled back again as it consolidates this huge move off its bottom. So to figure where it’s headed next, I compared this last Crypto Winter to the previous major crash in 2014. 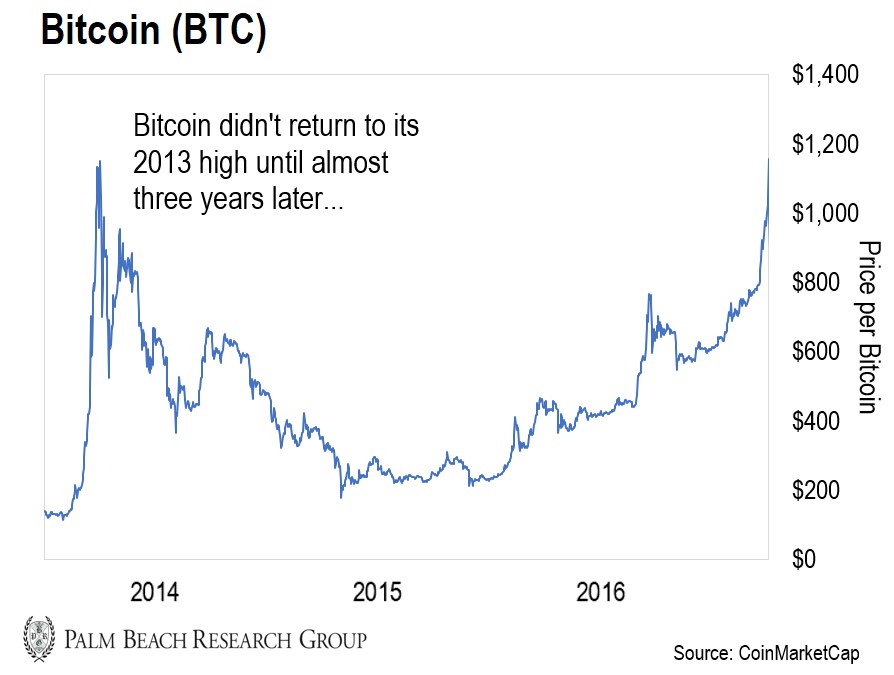 Let’s contrast that with the recovery we’re seeing now…

Remember, bitcoin reclaimed 70% of its old high in just 18 months. That’s about 50% faster than its last sell-off. And if this rebound speed continues, we’ll hit new highs much faster than ever before.

The bottom line is: Bitcoin is becoming less volatile and recovering from its big drawdowns much more quickly.

Based on this, I expect bitcoin to break out to all-time highs within nine months. But what does that mean for the entire crypto space?

You see, the crypto space covers not just bitcoin but altcoins. Altcoins are any cryptocurrency that’s not bitcoin.

Well, back in 2016 and 2017, people were telling me, “Teeka, why are you recommending these tiny altcoins? Bitcoin will demolish them all.”

Yet I knew once bitcoin recovered, the rest of the altcoin market would play catch-up.

So I started loading up on tiny cryptos for my subscribers. We bought unheard-of names trading at $5–10 million market caps that would go on to be worth billions…

We’re being presented with that same opportunity today.

While everyone is lamenting the death of altcoins, I’ve been quietly turning my subscribers toward a handful of tiny cryptos already exploding in value. Some of them have already gone up over 100% this year.

Of course, I’m always a bitcoin bull. It’ll continue to go much higher in our lifetimes.

So bitcoin is like the granddaddy blue-chip of the crypto space.

But along the way, there will be these tiny plays with massive moves. Market caps of $5–10 million will grow to be worth $1 billion… $5 billion… or even $20 billion. These names are out there – and I’m digging them up for you.

Hopefully, this gives you a little bit of perspective on where we are now… and how much faster bitcoin is recovering versus the last major sell-off in 2014.

Again, I want to stress: We’re at the beginning of a brand-new bull trend in crypto assets. Even though it hasn’t shown up in the altcoin market yet, it will.

So please use this opportunity to judiciously add to your bitcoin position where appropriate. Remember, you don’t need to bet the farm.

And be patient. Because we’re very close to entering this new period. We’ll not only see bitcoin prices break out – all cryptos will rise to levels we haven’t seen in a very long time.

P.S. I’m revealing details tonight at 8 p.m. ET about five tiny cryptos I’ve dug up this year. They could make you millions in as little as 10 months. Plus, I’m giving away the name of my new No. 1 crypto pick as well.

This is all thanks to a lucrative phenomenon that we won’t see again until 2024. So be sure to watch my first LIVE crypto training session of 2019 – 5 Coins to $5 Million.

I’m inviting you to attend for free, so join me on the path to becoming a crypto millionaire by signing up right here.