These days, there’s one thing that keeps me up at night. And we can see it in a single chart. 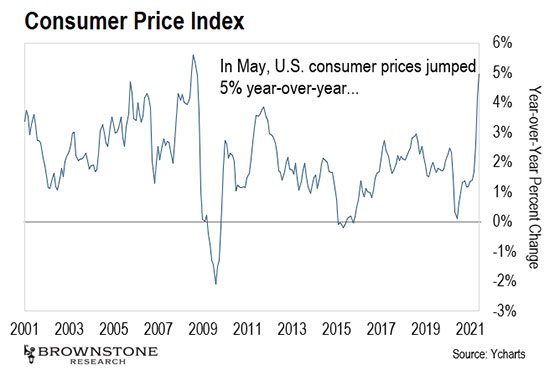 Inflation. It has come back with a vengeance since early this year.

And this morning, the Labor Department reported that consumer prices in the U.S. jumped 5% year-over-year. As we can see in the chart above, that’s the highest annual inflation rate in about 13 years.

And it’s not just the Consumer Price Index. The core price index – which strips out the prices of food and energy, both of which tend to be more volatile – rose 3.8%. That’s the highest increase since 1992.

For those of us who care about our savings, our investments, and the cost of goods and services, these numbers are not good news. What keeps me up is whether or not this is a trend that will continue for the next year.

Some inflation is expected and will likely be short term.

For example, we should expect that the price of commodities like oil will rise. Most of the world has been under severe restrictions for travel. The demand simply wasn’t there, and the supply chains reduced their capacity accordingly.

But the economy has quickly rebounded. Things have opened up, and I can tell you from personal experience that the planes are full on domestic flights.

We are seeing some positive signs. Supply chains are making progress improving lead times for products and commodities of all kinds, albeit not as quickly as we’d like.

And it’s encouraging to see that the prices of several commodities are dropping. Steel, corn, copper, and aluminum have all pulled back more than 10% since last month. And lumber, which is closely tied to the housing market, has dropped more than 30%. Let’s hope this trend continues.

What we’ll be watching for closely is if inflation continues to rise even though the prices of commodities continue to fall. If that happens, we’re in for an extended period of higher prices until we dramatically shift our monetary policy.

The race for AI dominance is on…

There’s a lot of discussion right now amongst U.S. politicians and academics about how China’s government has invested heavily in artificial intelligence (AI).

In fact, the country has openly set a goal to become the world’s AI superpower by 2030. This has caused some uneasiness among many countries, including the United States.

And a recent announcement from China has just made this an even hotter topic.

The Beijing Academy of Artificial Intelligence announced that it has developed a natural language processing (NLP) model that is superior to any others produced to date. This model can train an AI to generate text and speech using 1.75 trillion parameters.

Put another way, the Beijing Academy claims the model can train an AI to communicate just like a human.

To put this in perspective, Google’s Brain Switch Transformer previously held the record. It utilized 1.6 billion training parameters. For context, that’s a 1,000x increase in parameters. And the more parameters, the more sophisticated and powerful the AI can become.

And China is claiming that this model produces an AI that can pass the Turing test. That’s when a user cannot determine whether they are interacting with a human or an AI.

Getting to an AI that can pass the Turing test has long been an aspirational goal in the industry, but it hasn’t been accomplished yet. It’s a key milestone for reaching artificial general intelligence (AGI). That’s when AIs become just as intelligent as human experts in a wide range of fields.

China hasn’t proven that its new AI has passed the Turing test yet. But if it has, this would be a major inflection point for AI.

And this progress is right in line with China’s stated goal to be the world’s AI superpower by 2030. That’s not something the U.S. government takes lightly.

In fact, the U.S. Senate just passed the U.S. Innovation and Competition Act in response to China’s ambitions in artificial intelligence. This is a bipartisan bill that commits $250 billion to research and development (R&D) around AI, semiconductors, and telecommunications technology. It’s designed specifically to counter China’s own state-level investment in AI.

I understand the sentiment behind the bill. But what the politicians miss here is that the U.S. still leads the world in AI, semiconductors, and telecommunications technology. And it has also invested more into AI research than any other country.

Interestingly, this new bill was not received well by China. Chinese officials expressed “strong indignation and resolute opposition” to it. And they claimed that it showed a “paranoid delusion of wanting to be the only winner.”

What we can take from this is that the race for AI supremacy is heating up. It’s a national priority, and for some countries, it’s a matter of national security.

We can expect this to be a major focus of the U.S., China, and other nation-states in the years to come. And as I’ve predicted before, artificial general intelligence will come much faster than most think… It will happen before the end of this decade.

And to be blunt, it cannot be stopped. Let’s just hope that the right safeguards are put in place so that humans maintain control in the event of a “runaway” AI that might engage in some undesired activities.

On the bright side, all this extra money flowing into AI R&D and new company formation will lead to some fantastic investment opportunities over the coming years. And it’ll also lead to technologies that will make our lives far more convenient than they are today.

We first talked about Instacart back in May of last year.

At the time, fear from the COVID-19 pandemic was at its peak, and Instacart was scrambling to raise money and hire workers. That’s because its grocery delivery business exploded as the U.S. went into economic lockdowns.

Instacart enabled consumers to shop for groceries online and have them delivered right to their homes. It was the perfect pandemic offering.

From there, Instacart went on to raise an astounding $790 million in venture capital (VC) across three early stage funding rounds between July 2020 and March of this year.

As a result, the company is now valued at an impressive $39 billion. For comparison, it went into the pandemic with a $7.9 billion valuation.

So Instacart is now flush with cash. But it’s still having problems getting enough workers to keep up with demand. Just as I predicted, Americans have not given up the convenience of online grocery shopping even as COVID-19 fades away.

To start with, the company is planning to deploy autonomous robots to pick and package non-fresh goods for consumers. Humans will still be required to fulfill orders for fresh vegetables, eggs, meat, and fish due to their fragile nature. But robots will handle everything else.

Instacart is also looking into building its own fulfillment centers around the U.S. This would allow the company to stock its own groceries, potentially bypassing the big chains. And Instacart would be able to optimize its selection based on consumer demand.

Having its own fulfillment centers would also make the deployment of robot workers much easier.

We can imagine how autonomous robots buzzing around our neighborhood stores may be a little off-putting to some shoppers. The existing grocery chains probably will not go for it. Accommodations would have to be made, and that might make partnerships more difficult.

That means Instacart is potentially positioning itself in a way that will put it in direct competition with Amazon and Walmart. There just aren’t many companies with enough capital to operate their own fulfillment centers around the country.

And that’s where Instacart’s massive VC rounds come into play. The $790 million raised over the past year will go a long way toward funding the build-out of a fulfillment center business.

What’s more, I expect Instacart to go public before the year is out. And I wouldn’t be surprised if the company raises a few billion through its initial public offering (IPO). The purpose, of course, would be to fund this expansion.

So this is something I’ll be watching closely as the year progresses. If Instacart is successful, it could permanently alter how Americans shop for groceries.

I can easily envision a world in which more than half of the U.S. adult population shops for groceries entirely online. Many of us may never need to set foot in a grocery store again.

Some companies have suffered immensely over the past year, while others like Instacart have thrived.

If any readers would like to learn more about which companies I believe will succeed in this new economy, then please go right here for all the details.

In a big development, Google just opened the door for digital asset exchanges to advertise on its platform. This is telling…

I suspect most people don’t know this, but Google banned cryptocurrency advertising on its platform back in March 2018. And it immediately shut down all existing ads about digital assets and cryptocurrencies.

One wouldn’t think that Google would be in the business of censorship, especially not back then. But Google showed its true colors. And this had a major impact on the entire digital asset industry.

After all, how can a nascent industry gain customers if it can’t advertise its services?

Of course, Google claimed that this ban was to keep us all safe. It said that there were too many scams in the industry.

And while there were some bad actors in the crypto space, there are scams in every industry. That’s why due diligence is so important when making both investment and purchase decisions.

As of August 3, the exchanges and companies that meet Google’s criteria will be free to start advertising. I’m sure we’ll see an avalanche of digital asset ads as a result. It will be like a major weight has been lifted from the industry.

And I’ll point out that the timing of this move is not a coincidence.

When digital asset exchange Coinbase went public earlier this year, it added a lot of credibility to the entire industry.

Now that it’s a public company, Coinbase is required to report earnings results each quarter. This provides a level of transparency that’s never existed before in the industry.

And as we discussed, it turns out that Coinbase is incredibly profitable. In fact, it’s now the largest brokerage platform in the world by a large margin. No doubt Google wants to attract some advertising dollars from Coinbase based on its incredible success.

In addition, other top digital asset companies like Kraken, Circle, and Ripple Labs are each looking to go public in the near future. This will strengthen the industry’s credibility even more.

What we’re seeing here is a sign that the digital asset industry is maturing. This is how it happens.

And that means Google can no longer justify banning ads from regulation-compliant companies in the industry.

This is very bullish for the digital asset space. We’ll see the industry grow rapidly, attracting new users in the process. And I’m sure some fantastic investment opportunities will come our way as a result…