It has been incredible, but sadly not surprising, to watch the testimony of Frances Haugen, a former Facebook product manager, in recent congressional hearings.

The whistleblower has made an incredible sacrifice to give us an inside view of what is really happening inside this mind-bending tech giant.

She was hired to help protect against election interference more than two years ago. She hoped to make a difference. Yet she was not empowered to do her job.

What she found was a company unwilling to address the damage that it was doing. Her team was given limited resources and she quickly learned that Facebook prioritized growth and user engagement above all else.

With her testimony, combined with that of others, The Wall Street Journal revealed some very uncomfortable truths about Facebook:

As this information, and much more, became a matter of public record, what was Facebook’s response? It said The Wall Street Journal’s reporting painted a “false picture” of the company.

The Wall Street Journal also revealed that Facebook’s executive team has discussed suing the whistleblower for stealing the documents. That’s about the worst move that Facebook could make. Doing so would further damage its reputation. The smart move would be to address these truths that have been shared.

It’s one thing if she had taken intellectual property that belonged to the company and sold it to the competition. This, however, was internal research that demonstrates that the company has long known how detrimental its platform has been to society, and it is doing very little to address any of these problems.

In fact, it is designing software algorithms to cause even more division.

And Facebook has been racing ahead to further develop and influence children 13 and younger. Thankfully, based on this recent testimony, Facebook announced that it is delaying its new Instagram app for this age group. Sadly, this is only temporary.

Not only will Facebook attempt to reach everyone on the planet irrespective of age, but it will also continue by every means to bend the way that we think. It will censor, ban, filter, influence, and monetize us every day. It is so pervasive and persistent, it can be hard sometimes to recognize it is happening.

Making matters worse, its latest push is to create its own metaverse – an online virtual world where it wants us all to hang out for a few hours a day to transact, work, communicate, and play – all the while further enriching Facebook itself. I can’t imagine a world in which that’s a good idea. And it couldn’t possibly end well.

In a typical attempt at virtue signaling, Facebook announced that it will spend $50 million to “work with experts in government, industry, and academia to think through issues and opportunities in the metaverse.” Its stated intention is to examine the privacy and safety issues.

It’s going to spread some money around. Ironically, the company is sitting on a cash pile of $64 billion and will generate $36 billion in free cash flow this year. Hilarious.

If we learned anything from this latest whistleblower testimony, it won’t matter a bit what they find from its round of metaverse research designed to keep us all safe. They will build it for growth and engagement as their top priority.

I can’t help but think that Facebook, Google, and Twitter are this era’s version of the fight against big tobacco – the fight that culminated in a massive settlement worth more than $200 billion back in the late ’90s to care for those who were influenced by the tobacco companies’ egregious marketing.

Only this time, it’s not about physical health. It’s all in our heads…

It was just a matter of time. Japan – my adopted country – just started producing and selling the world’s first food edited with CRISPR genetic editing technology.

Japanese startup Sanatech Seed is now selling what it calls the Sicilian Rouge High GABA tomato to consumers. And to further increase awareness, it gave away seedlings to more than 4,000 gardeners across the country.

What makes these tomatoes unique is that Sanatech Seed used CRISPR to edit the tomato’s genome so it produces less of the enzyme responsible for breaking down an amino acid called GABA. That’s short for gamma-aminobutyric acid.

Doing this results in tomatoes that contain five times more GABA than they otherwise would. And GABA is thought to have the beneficial effects of reducing stress and improving sleep. It’s like a tomato that doubles as a supplement.

And here’s the key – CRISPR-edited foods have a distinct difference that sets them apart from what we refer to as genetically modified organisms (GMOs).

Whatever the case, GMO foods contain foreign DNA. That’s why they are subject to strict regulatory oversight in many countries.

On the other hand, CRISPR-edited foods do not contain any foreign DNA. Instead, CRISPR is used simply to make small edits to the existing DNA.

This is a major turning point in the industry.

The ability to bypass stricter GMO regulations will lead to a major increase in CRISPR-edited food products. This particular tomato is just the start of what will be thousands of new CRISPR foods.

In fact, another team in Japan is already working on a CRISPR-edited red seabream. This is a popular fish in Japan.

And the team is using CRISPR to increase the fish’s muscle amount up to 50%. This would obviously result in larger seabream and more protein per fish. And approval for this new CRISPR-edited red seabream could come as soon as this month.

We are witnessing the birth of an entirely new industry. We will see hundreds of companies formed specifically to apply CRISPR to the food and agriculture industry.

Perhaps surprisingly, Ford is back in The Bleeding Edge today.

We last talked about Ford in June when the company announced its first all-electric F-150 truck. It calls it the F-150 Lightning.

And just a few days ago, Ford made another huge announcement. The iconic U.S. carmaker revealed an $11.4 billion plan to build a new electric vehicle (EV) assembly plant in Tennessee and two EV battery factories in Kentucky. This is a great development.

As a result, Ford expects to produce enough batteries for about one million EVs annually. That will certainly jumpstart America’s shift from traditional internal combustion engine vehicles to EVs.

And bigger picture, this is more proof that an American manufacturing renaissance is underway right now. That’s something I talked about in detail way back in my 2021 prediction series last December.

For the last 30 years or so, the world was focused on globalization.

And for a time, this worked relatively well. Consumers had access to goods and services at lower prices. This brought roughly a billion people out of poverty. And the world became more interconnected and interdependent than ever before.

And over the past year and a half, the world has learned the hard way how fragile centralized manufacturing is. All the supply chain problems the world is dealing with are the direct result of this centralized model.

So I love what Ford is doing here.

It’s not just about moving manufacturing back to the United States – just as important is the implementation of a decentralized manufacturing model. This model involves smaller, highly automated plants that produce goods closer to the markets they serve.

This approach is robust and far more efficient. And it’s also better from an environmental standpoint. That’s because it simplifies shipping and logistics, requiring the goods to travel far fewer miles.

And I’m impressed that Ford went one step further.

Ford is also partnering with Redwood Materials as part of this investment to address end of life for its own EV batteries. Redwood Materials is the battery recycling company we talked about back in August. It was founded by J.B. Straubel, the co-founder and former chief technology officer of Tesla.

So Ford is creating the infrastructure to handle an EV battery’s entire life cycle. It starts with production and distribution, and it ends with recycling once the battery’s useful life has ended.

So this is a move we’ll keep an eye on… And if any readers want to learn more about how to profit from the EV revolution taking place, then simply go right here for more details on my latest recommendations.

In a move that shouldn’t surprise us, Amazon just announced its first home robotics product. This makes perfect sense.

After all, Amazon is already using autonomous robots throughout its network of warehouses and distribution centers. It’s a natural evolution to apply that same technology to home robotics. 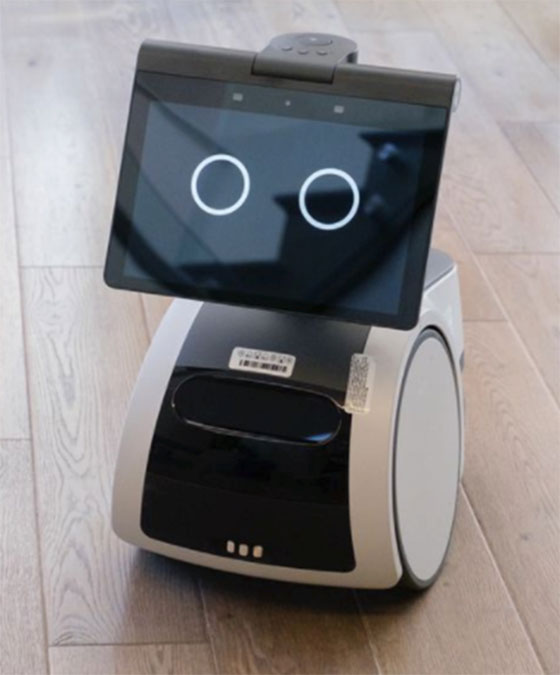 We can see that it is composed of what looks like an Echo Show screen on a pair of wheels standing about a foot and a half high. And like the popular Roomba vacuum robot, Astro comes with its own docking station which we can see plugged into the wall in the photo below. The robot returns to the station any time it needs to charge its battery.

And look at this – Astro even comes with a periscope. 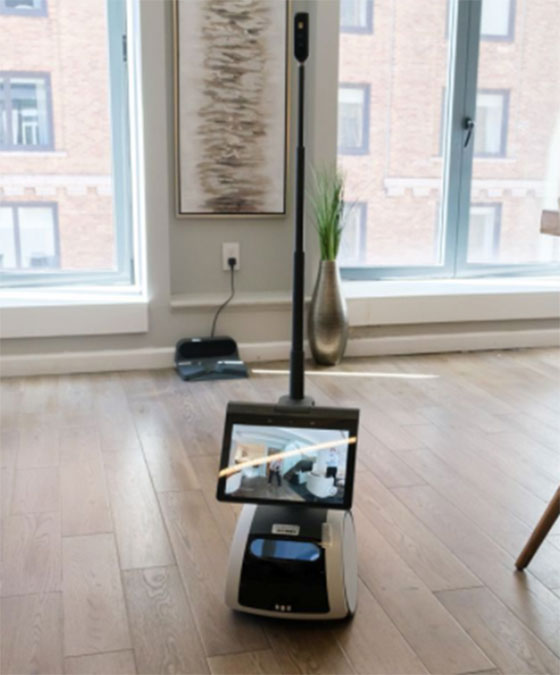 How’s that for neat? This periscope rises to 4.5 feet, which allows Astro to see above tables and other obstacles. It can also enable a video call for people standing in the room.

As we would expect, Astro is powered by Amazon’s Alexa AI. And it is loaded with sensors that allow it to map out rooms in the house. What’s more, Astro employs facial recognition technology. It can tell the difference between people in the house.

This allows Astro to be more than just Alexa on wheels.

There’s a small bin on Astro’s back that allows the robot to transport small objects. For example, users could place a bottle of water in the bin and tell Astro to take it to a family member on the other side of the house.

Astro can also be accessed remotely. This makes the robot functional as a home security device. Users can give Astro commands remotely through an app, and they can see through Astro’s camera as well. That’s certainly useful. We can “beam” into Astro at any time to check on the house when we are away.

I can see the utility here. But the big questions are – will consumers adopt this, and how will they use it?

For that reason, I know Amazon views Astro as an experimental product. The company will be watching closely to see how Astro is used, and it will add features and make improvements to the second-generation product accordingly.

And looking at Astro, it makes me think that it might actually be more useful in a work environment. I’m excited to see how, and where, Astro is adopted. At the current price point of around $1,000, it’s cheaper than the latest iPhones, so it’s an accessible device for a large percentage of the market.

So I’m very curious to see how Astro is received in the marketplace. That will determine the future direction of Amazon’s home robotics business.

And I’m curious – would any readers be willing to bring Astro into their home? Send in your thoughts to [email protected].