Something is seriously afoot.

It’s not normal to see such a sudden sense of urgency within an industry… yet I believe this fervor is well-founded.

Executives at Google are warning that encrypted data being sent today is already at risk of not only being stolen, but also decrypted through the use of quantum computers. What’s remarkable about those comments is that they aren’t talking about something several years down the road.

The problem, they believe, is now… right now.

One of the most important predictions that I made at the end of last year, for 2022, is that one of the major players in the quantum computing industry would announce that they have developed a 256-qubit quantum computer.

If my prediction comes to pass, it means that cracking today’s standard encryption will be a trivial task. And that means that things like national security documents, health records, financial records, banking systems, etc. will all be at immediate risk.

This isn’t hyperbole – it is a clear and present danger.

The timing of Google’s warning isn’t a coincidence. And it’s not a general concern.

Here’s the thing… That was almost three years ago. And Google has been very quiet on its own developments in quantum computing since then.

We don’t know how much progress they have made, but there’s one thing I’m certain of… they are two or three generations down the road of development compared to where they were back in 2019.

And I suspect that’s why Google has such a strong opinion about how urgent it is that the world upgrade its encryption systems to new standards as soon as possible. Google may very well have already developed the capabilities to crack standard encryption.

In other words, they know that if they can do it, others can’t be far behind.

At the core of the solution is the need to define new standards for post-quantum cryptography. The National Institute of Standards and Technology (NIST) is responsible for making this happen. The process of standards development began in early 2016 and seven finalist technologies were selected in July of 2020.

And now is the time to decide which direction to go with the standards. We’re expecting decisions in the coming weeks, but we’re already way behind.

The reason is that the selection and development of standards is just the first step. The bigger problem is how to take on the Herculean task of upgrading the world’s devices and systems to this new post-quantum cryptography… At least 20 billion devices will need a major software upgrade.

Some devices will simply be too old to upgrade. There are more than 7 billion mobile phones alone that will need an upgrade or will have to be replaced entirely. Every computing system will require one as well.

Basically, anything and everything that is connected to the internet will need an update.

It will take years to reach the majority of devices, and even longer to clean up the long tail of adoption. And that assumes everything moves quickly and stays on schedule.

The timing for Google’s recent spin out of its quantum computing assets and into a newly formed company – Sandbox AQ – wasn’t a coincidence. Neither was In-Q-Tel’s investment into Sandbox AQ’s nine-figure raise to launch the company. In-Q-Tel is the venture capital arm of the Central Intelligence Agency (CIA).

As if we needed to add more chaos into the world. Now is not the best time.

If a handful of powerful countries and corporations suddenly have the ability to render all current encryption useless, I can’t imagine what would follow.

Our only saving grace is that the technology wouldn’t be generally available. The largest risk would be from a nation-state misusing the technology for the explicit purpose of theft of data and/or causing harm.

The real wildcard is China. The world just doesn’t know how much progress has been made with China’s quantum computing programs. Unlike what’s happening in the U.S., which is primarily funded by the private markets, China’s initiatives have been mostly backed by the government.

Every once in a while, I make predictions that I hope are incorrect. This is one of those times. We need more time to upgrade our systems to post-quantum cryptography before the threat is realized.

Fortunately, the most advanced quantum computing systems are being developed here in the U.S. And they are almost entirely focused on solving incredibly complex problems that can’t be solved with classical supercomputers.

New materials, molecular compounds, cures for disease, advancements in climate science, answers to the mysteries of our own universe, and so much more await us in the years that follow. These are all positive developments.

While there is great cause for concern, we still have so much to look forward to.

Drone deliveries are ramping up…

Imagine getting a last-minute grocery item delivered to our home in just minutes. This is quickly becoming reality for four million U.S. households…

Walmart has been testing drone deliveries in partnership with three small companies over the last two years – Flytrex, Zipline, and DroneUp. And it appears that Walmart has chosen a favorite.

Last year, Walmart invested directly in DroneUp. And now the retail giant announced it will be using DroneUp’s services at 34 stores.

Here we can see the drone in action:

These delivery drones can make deliveries of up to 10 pounds within 30 minutes. That’s pretty incredible.

At launch, drone deliveries will be available from 8:00 a.m. to 8:00 p.m. local time. And they will cost a flat delivery fee of $3.99. That’s not bad considering the convenience, as well as how much time and gas would be saved not having to drive back and forth to a store.

Right now, orders must be placed from DroneUp’s website. You can do so right here. If any readers would like to check it out, just enter your address to determine eligibility.

And if anyone is in a coverage area and tries out the service, please let me know. I would love to hear about your experience. A photo would be fantastic as well.

And looking at the big picture, Walmart is making even better progress with drone delivery than Amazon and Google right now. Its 30-minute delivery promise will be hard to beat.

This latest move by Walmart will definitely light a fire under the competition, which means that an even larger percentage of the country will be gaining access to this kind of quick delivery service over the next year or two.

The virtual reality space is heating up…

Things are getting very interesting in the virtual reality (VR) space right now. We are starting to see companies develop technology to make VR even more realistic.

One way to do this is through haptics technology, which provides physical sensations like vibrations and hot/cold sensitivity. We’ve explored various kinds of haptic technology in the past in The Bleeding Edge.

And now another company is taking this even further by adding a sense of smell… That’s why an early stage startup called OVR Technology just caught my attention.

OVR Technology is based in Vermont. And it has developed “snap-on” technology that integrates with a VR headset to produce specific smells. The “O” stands for olfactory. 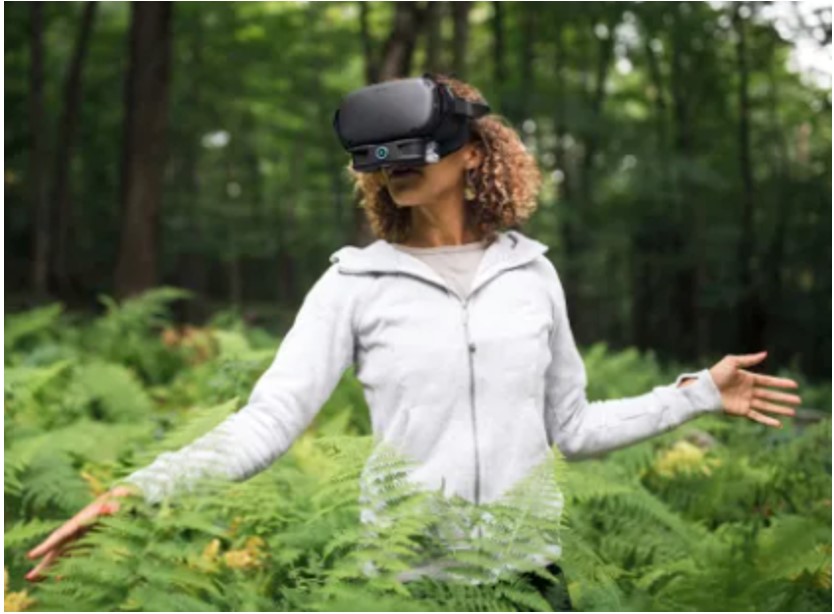 Here we can see the horizontal snap-on device just below the VR headset’s lenses. That’s the mechanism for delivering smell in a way that is complementary to a VR software program.

OVR has developed a simple cartridge-based system for its smell “factory” that looks a lot like ink cartridges for printers: 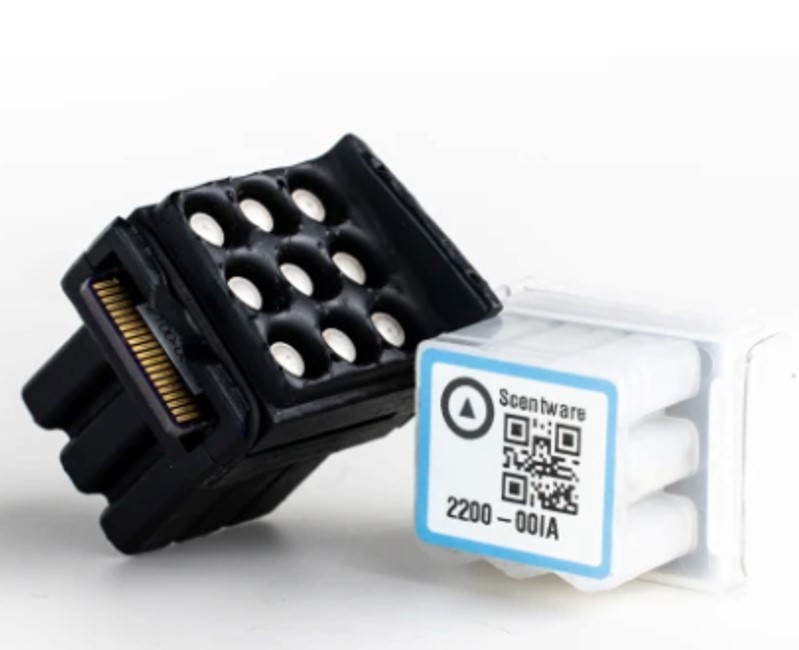 These are the “scentware” cartridges that plug into OVR’s snap-on device. The cartridges contain molecules that produce specific smells. And when they are empty, users simply replace them with a new cartridge.

To me, this is a fantastic feature. It’s a way to bring any VR experience to life.

And bigger picture, developments like this signal that the VR industry is making terrific progress. Companies are now focusing on supplemental technology like this, which tells us that the core VR headset technology is about ready for prime time.

And of course, that means we will have some incredible investment opportunities as this technology takes hold. For more information on this major trend, simply go right here.

The smart money is going big on gaming…

We’ll wrap up today with some insight from the private markets.

Overall, we are seeing a little bit of a pullback in venture capital (VC) funding. It’s still strong, but VC firms are getting more selective with their investments.

Yet legendary VC firm Andreessen Horowitz just announced that it is raising a $600 million fund to invest exclusively in the gaming industry. It is calling it the Games Fund One.

Raising such a large fund in the face of a tighter VC market is telling. Remember, this comes on the heels of Andreessen’s historic $2.2 billion fund focused on crypto projects and Web 3.0 gaming.

So Andreessen Horowitz is doubling down on gaming here. That tells us just how much potential it sees in the industry. And this is largely thanks to the Web 3.0 “play-to-earn” model, as well as developments with both augmented reality (AR) and VR.

In fact, the gaming industry has nearly doubled in size just in the last 12 months thanks to these technologies. The market size has grown to an impressive $336 billion today.

Here’s a breakdown of the market’s segments: 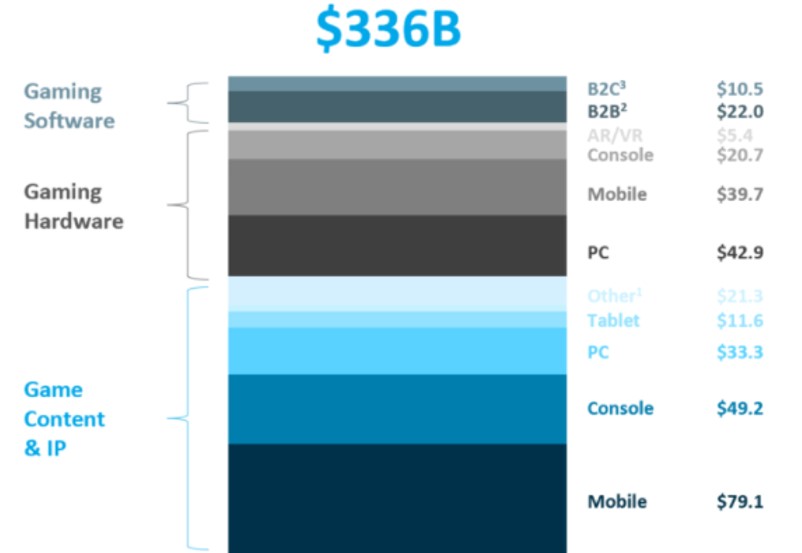 To put this in context, the movie and entertainment industry is worth an estimated $97.4 billion this year… That means the gaming industry is over three times larger. And it’s growing at a double-digit percentage clip as well.

We have already added exposure to these developments in some of our portfolios here at Brownstone Research. And as more next-generation gaming companies access the public markets, we’ll be looking to add even more.