Back in December of 2020, I read an article about the semiconductor industry from one of the popular tech-centric media sites. It predicted a slowdown in venture investment in 2021.

The premise was along the lines of: “2020 venture investment in semiconductors was a record year, the venture capital firms have ‘placed their bets,’ and they’ll step aside and let their investments work in 2021.”

All I could think was that the tech journalist really didn’t understand what they were writing about at all.

For another, these journalists clearly didn’t appreciate the exponential growth in semiconductor technology and the exciting developments that would attract more private capital in 2021.

All of my research is conducted through the lens of a technologist, executive, and private investor. And when dealing with a topic as ever-changing as high technology, that’s a huge advantage. Needless to say, VCs didn’t step aside.

Here’s what actually happened in 2021… 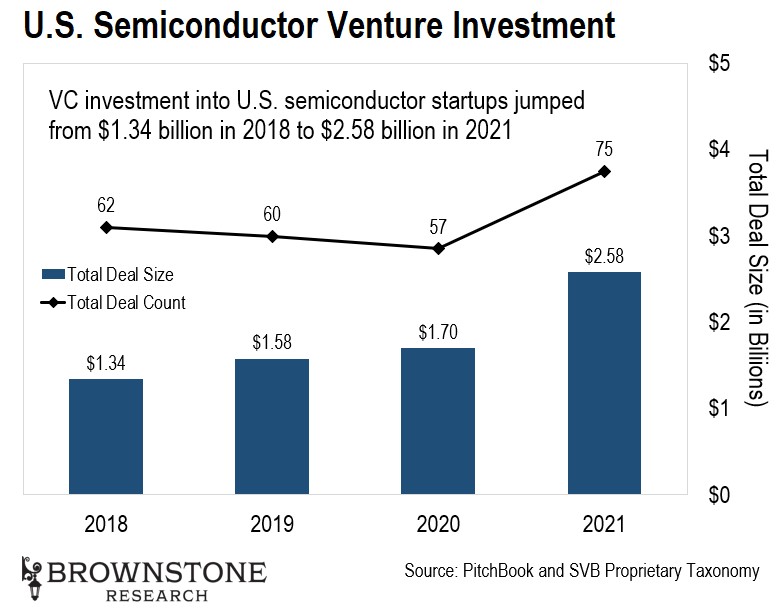 While the chip shortages and the large semiconductor acquisition announcements like NVIDIA/ARM and AMD/Xilinx tend to grab the headlines, in the background, venture investment in semiconductor startups has been booming.

And that makes sense. Amidst semiconductor shortages, the industry has had to adjust… The most obvious way is to simply build more manufacturing capacity.

As we have seen in The Bleeding Edge, the industry in capital expenditures is doing exactly that.

But the longer-term, more strategic capital goes into the startups that are developing the next generation of semiconductors. This is why venture investment into U.S. semiconductor startups jumped from $1.7 billion in 2020 to $2.58 billion in 2021… That’s an incredible 52% jump.

Those amounts may not feel like a lot when numbers in the hundreds of billions – or trillions – are being thrown around, but it’s a big deal. Those of us in the industry can see a few interesting dynamics at play that are driving this record level of investment:

I know that a topic like this may seem a bit esoteric or nuanced, but the implications should be interesting to all of us… This level of investment that is happening right now is going to change all of our lives.

The bleeding edge technology that is being built for all of those specific applications will end up in our hands, on our wrists, in our computers, in our cars, and inside medical equipment… all designed to improve our quality of life.

While we’re certainly dealing with some challenges around the world right now, we still have so much to look forward to.

A Germany-based company called Marvel Fusion just popped up on my radar.

This company has only been around for less than three years. But it just raised €60 million to fund a new kind of nuclear fusion reactor.

For the sake of new readers, nuclear fusion is essentially the power of the Sun. It involves taking two separate nuclei and combining them to form a new nucleus.

This produces an enormous amount of energy that’s 100% clean. And unlike nuclear fission, forms of nuclear fusion produce no radioactive waste.

Fusion takes place by igniting and controlling a plasma inside of a fusion reactor. 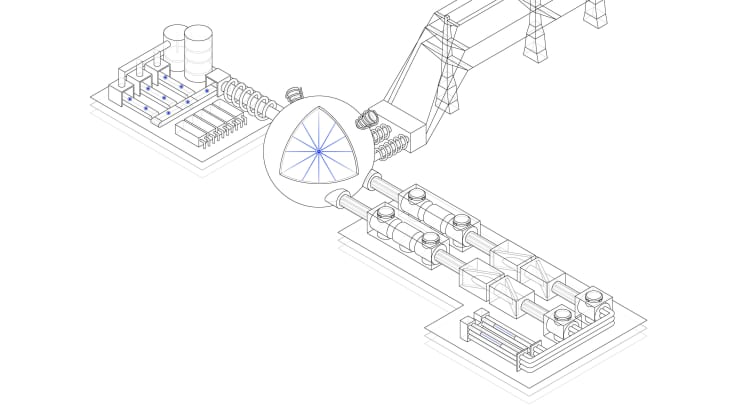 This is purely a theoretical model right now. Yet Marvel’s research suggests that this new design can produce an excess of clean energy.

But it’s just a theory until the company produces real fusion reactions that work… And that’s what the capital raise is for, to test the theory.

As we have discussed before, nuclear fusion is the future of clean energy. There is no other form of clean energy, with little or no radioactive waste, capable of providing baseload energy requirements on a global scale.

What’s more, I’m noticing a fantastic trend in the industry.

Like Marvel, there are a number of other companies raising money to explore different nuclear fusion reactor designs. This is critical.

The only way we can determine which fusion designs work best is to try them all out. The industry has to go from theory to practice. And that’s exactly what’s happening right now.

A big development at the University of Chicago’s Computer Integration Lab gives us a glimpse at just how immersive virtual reality (VR) technology can be.

Researchers just unveiled a “chemical haptics” system that is integrated with a VR headset. The system delivers certain feelings and smells to the user, helping make the VR experience seem even more real. 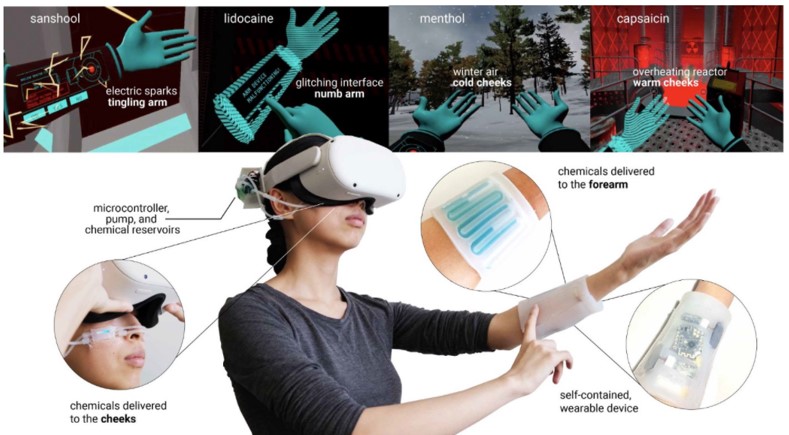 A lot is going on here – let’s walk through it.

Haptics technology produces sensory feelings when a specific action happens in a game or other computer program interaction.

The simplest example is the vibrate feature on our smartphone. If we have vibrate on, the phone starts vibrating when someone calls.

The same feature is true for a gaming console and its controller. If there is an action in the game like driving over a bumpy road, the controller would vibrate to simulate the experience.

This system at the University of Chicago takes the technology a big step forward. It uses chemicals to produce certain feelings on the users’ cheeks and arms:

These chemicals are held in a device attached to the back of the VR headset. It consists of a microcontroller and a pump that discharges a small amount of the desired chemical based on the VR experience.

In the image above, these chemicals can be sent to both the cheeks and the band around the user’s forearm.

For example, if a user is walking through the snow in a VR experience, this system could deliver menthol to both the cheeks and the forearm. This would create a sense of cooling that would match the virtual world’s environment.

On the other hand, if the VR experience was set in the desert, this system could deliver capsaicin to the cheeks and forearm. That would produce a warming sensation that would make the experience more immersive.

This is pretty wild. And given the rise of metaverses that we have been tracking, it’s easy to see how this could catch on with people looking for the most immersive experience possible.

So this is an exciting development. And it will have a major impact on the metaverse space.

And we’ll be looking for the best ways to play the metaverse in my research services… To learn more about the current opportunities on my radar, go right here for the details.

Why the 5G industry had a hearing on Capitol Hill…

Last week, the U.S. Congress Committee on Energy and Commerce met with representatives from the Cellular Telecommunications and Internet Association (CTIA) on Capitol Hill.

The discussion was all about the future of fifth-generation (5G) wireless technology in America.

The CTIA represents the wireless industry in the United States. And reps met with Congress because the industry needs more spectrum to build out 5G networks.

This may come as a bit of a surprise.

If we think back to the big 5G spectrum auctions over the last two years, the wireless industry spent roughly $117 billion on spectrum. That’s mostly by the big three – AT&T, T-Mobile, and Verizon.

But it’s not enough.

The CTIA pointed out that countries around the world have committed 650 megahertz (MHz) worth of spectrum to their 5G networks.

Meanwhile, the U.S. has only made 270MHz available for 5G. That’s less than half the global average.

And here’s why this is so important: 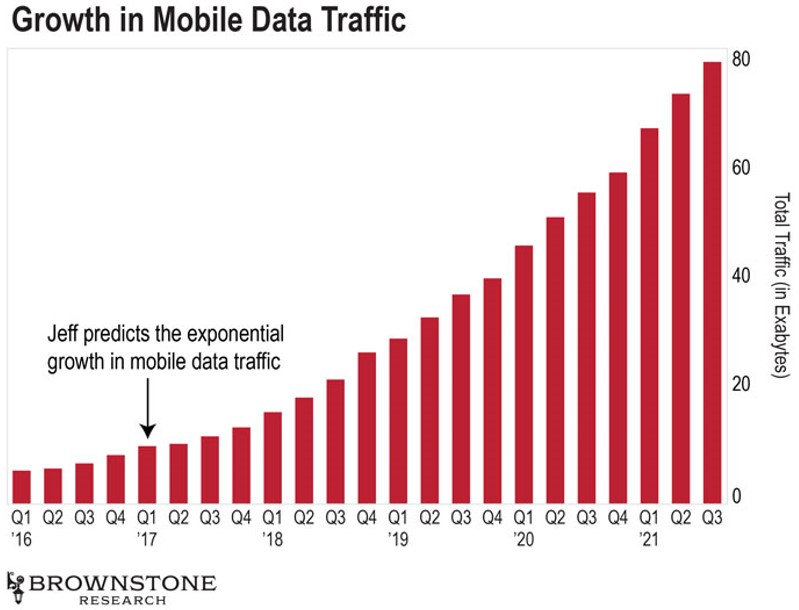 This is a chart of global mobile data traffic. It comes from Ericsson’s most recent research report.

The most recent data we have is through the third quarter of 2021. And we can see that data traffic nearly doubled since the end of 2019.

And here’s the thing – this growth came with fairly limited 5G network deployments.

We are going to see data traffic skyrocket as more 5G networks go online. They will unlock incredible software applications that tap into the lightning-fast speeds and low latency provided by 5G.

The wireless executives see this coming.

4G networks are mostly running at capacity right now… And 5G will open the floodgates to an explosion of data traffic, unlike anything we have ever seen.

So if the industry doesn’t get more spectrum for 5G, those networks will be congested and bogged down as well.

This is something I’ll be keeping a close eye on. If the industry can secure additional spectrum, it will accelerate the 5G build even more.

And to learn about my top company that will profit as 5G rolls out, check that out right here…

P.S. If you haven’t yet learned what “the Perceptron” is… please don’t delay.

My bleeding-edge artificial intelligence is powering our way forward… and enabling big gains in the crypto space. Rather than playing a guessing game on when to buy or sell, the Perceptron analyzes gigabytes of data… and tells us exactly when to move.

Even better… it can lead to as much as six-figure returns in as little as 60 days.

I unveiled the Perceptron last week… and the replay of that event will disappear soon. So please go right here to watch.