Finally, the airlines have had enough.

In a letter written to the U.S. president by the industry trade organization, Airlines for America, they are demanding that the mask mandates for airline travel be dropped.

The letter was signed by the CEOs of American, Delta, JetBlue, Southwest, United, Alaska Air, Hawaiian, and a few others. They stepped up out of necessity, and they also stepped up because what we know now simply doesn’t justify such an ineffective measure.

But before we get ahead of ourselves, we’ll take a look back at how this whole thing unfolded. After all, it was the CEOs of American, United, Delta, and JetBlue that took such “principled” positions on masking back in 2020. What was that all about?

I have traveled throughout the entire pandemic. I’ve seen it all. There were a few months from March through May where the airports were nearly empty, and every flight only had a few passengers on them.

It was pretty incredible and surreal. But those pleasant flights ended quickly when the mask mandates were put in place and just about any kind of service on a flight abruptly came to an end.

The broad-based support from the airlines was driven by one major necessity – money – and more specifically, billions of dollars of aid. Either they “got with” the narrative at the time, or “good luck” with getting the payouts.

And the money poured in after that.

In 2020, the top 10 passenger airlines received $37 billion from the U.S. government to keep the airlines running and jobs in place. Last year, another $13 billion more was doled out thanks to the kindness of U.S. taxpayers (note: the taxpayers had no say in the matter).

The airlines used part of that money to pay out bonuses to managers and executives to “ensure stability” as the airlines sat out most of the pandemic. And what did the government negotiate for the U.S. taxpayers?

The airlines agreed to promissory notes to pay back $14 billion of the $50 billion in grants back sometime in the future. The government – thus the taxpayers – also received warrants to purchase shares of airline stock. Who knows what those will be worth, if anything at all?

The aid has come to a stop now, however. And all the preventative measures and COVID-19 shots didn’t stop us from catching COVID-19 and didn’t even stop the spread of the virus.

So the airlines have no choice… The mandates have to be removed.

The airlines need things to return to normal. Otherwise, their businesses may collapse.

Which is why they wrote to the president:

It makes no sense that people are still required to wear masks on airplanes, yet are allowed to congregate in crowded restaurants, schools, and at sporting events without masks, despite none of these venues having the protective air filtration system that aircraft do.

Well said! And very logical. They went further by making a simple point along the lines of “this isn’t our job anyway,” saying:

It is critical to recognize that the burden of enforcing both the mask and pre-departure testing requirements has fallen on our employees for two years now. This is not a function they are trained to perform and subjects them to daily challenges by frustrated customers. This, in turn, takes a toll on their own well-being.

And smartly, they quoted the World Health Organization which has recently been a lot more honest about how the measures that were implemented simply didn’t work at all:

In the Tenth Meeting of the Emergency Committee on January 19, 2022, the World Health Organization (WHO) noted that ‘the failure of travel restrictions introduced after the detection and reporting of Omicron variant to limit international spread of Omicron demonstrates the ineffectiveness of such measures over time.’

And closing out, the demands followed as:

Now is the time for the Administration to sunset federal transportation travel restrictions – including the international pre-departure testing requirement and the federal mask mandate – that are no longer aligned with the realities of the current epidemiological environment.

We are requesting this action not only for the benefit of the traveling public but also for the thousands of airline employees charged with enforcing a patchwork of now-outdated regulations implemented in response to COVID-19.

Good for them. It’s about time.

The recent second extension of mask mandates by the current administration related to public transportation was nonsensical and not based at all on scientific research.

Aside from health service providers, public transportation is the last category to fall for us to be able to get back to normal.

For life and business to function normally, we all need to be able to travel freely, without restrictions to see friends, family, colleagues, and business partners.

As far as I’m concerned, it can’t happen soon enough.

Apeing into a metaverse…

Yuga Labs, the creator of the Bored Ape Yacht Club non-fungible token (NFT) collection, just raised an incredible $450 million in its first formal venture capital (VC) round. The round was led by Andreessen Horowitz’s crypto fund.

Yuga Labs is now valued at $4 billion. That makes it one of the most valuable NFT companies in the industry. This may seem like an insane valuation on the surface. But once we understand Yuga’s plans for this year, it’s not that crazy after all.

On Tuesday, we had a look at how the launch of the ApeCoin (APE) cryptocurrency will expand the Bored Ape brand significantly.

As a reminder, there are only 10,000 Bored Ape NFTs out there. And the cheapest one is currently selling for about $250,000… That means scarcity. It also means that less than 10,000 individuals can participate in the Bored Ape universe of assets (some hold more than one Bored Ape).

This was one of the key drivers for establishing a “currency” linked to Bored Apes. Those who read our piece on ApeCoin may have noticed Yuga Labs in the pie chart we showed: 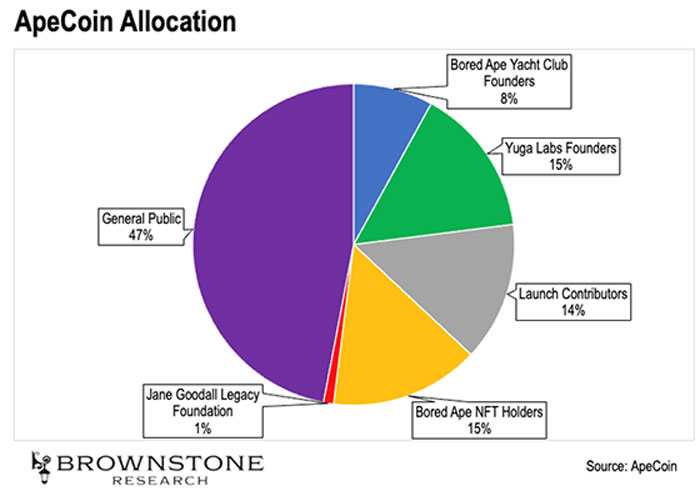 Yuga will receive 15% of all ApeCoins outstanding.

And it turns out, there’s a much bigger play at hand here…

As usual, Yuga Labs gave a presentation to the venture capitalists ahead of its funding round. That pitch deck leaked, and it paints an interesting story.

Yuga Labs plans to create its own metaverse. And the company has a unique vision.

The metaverse will be called Otherside. It will incorporate many aspects of successful “Web 2.0” massively multiplayer online role-playing games (MMORPGs).

At the same time, Otherside will feature blockchain-based “Web 3.0” incentives like the play-to-earn model that allows players to make money as they play. Of course, Otherside will enable NFTs, as we would expectâ€¦ And the money used in Otherside will of course be ApeCoin.

One of Otherside’s first milestones will be a “land” sale. Yuga Labs plans to sell 200,000 plots of land within the metaverse for about one ether (ETH) each.

ETH is trading at $2,957 as I write. So if Yuga can sell all the plots, it will bring in revenue of $591.4 million. Just to keep things simple, let’s say that Yuga sells $400 million worth of digital real estate in Otherside…

If we go back and look at the $4 billion valuation, that would be 10 times sales for super high growth, high margin business. That’s not crazy at all if Yuga can execute on its vision.

Yuga has quickly become a powerhouse not only in NFTs but also in the rapidly emerging space of metaverses. And now it has its own “currency” to boot.

There is so much activity in the cryptocurrency industry that no team of people can keep up with it all. That’s why I’ve developed a proprietary artificial intelligence (AI), a neural network, that can “see” future price appreciation in digital assets in advance.

Projects like this one are happening all over the place, which is why I built an AI to help us stay on top of it all and find the best trading opportunities. Simply go right here for more details.

If we remember, Facebook released its smart glasses in partnership with sunglass brand Ray-Ban last September. These glasses could take pictures and very short videos and upload them to Facebook and Instagram.

At the time, I called that product launch the precursor to a larger AR play. And that’s exactly what’s happened.

Facebook has now taken the Ray-Ban frames and added AR lenses, which are different than a simple smart-glass lens. This is a big jump that will enable some AR features.

For example, these glasses will allow users to view and send Facebook messages on demand. To enable this, Facebook incorporated its Voice Assistant Technology. Users can simply say “Hey Facebook” and then issue commands.

That said, this product is optimized for social media. Its AR capabilities are otherwise limited. And that gives us insight into Facebook’s overall strategy.

Most of the other players in the AR space are gearing up for a single, comprehensive launch. Facebook is doing it differently. It’s rolling out AR functionality in a gradual progression.

First, it was smart glasses. Now it’s limited-functionality AR glasses. This will allow Facebook to get market feedback that it can incorporate into its next launch, which will be full-scale AR.

We’ll watch its progress closely as these products roll out…

And my readers and I will profit as this smart glasses trend gains adoption… no matter who ends up leading the pack. To learn more about my top picks, please go right here.

General Motors is clawing back ownership in Cruise…

We’ll wrap up today with an interesting development in the autonomous driving space. General Motors (GM) is working hard to buy back its ownership interest in Cruise.

We have been tracking Cruise on these pages for years now. In fact, we discussed the launch of the company’s autonomous ride-hailing service in San Francisco last month.

For the sake of new readers, Cruise is GM’s self-driving division. GM acquired the startup for $581 million back in 2016. However, GM wasn’t in great financial shape at the time.

To shore up its finances, GM allowed several other companies – including Honda and SoftBank – to invest in Cruise. This brought cash in at a time when GM desperately needed it, but it also diluted GM’s ownership in Cruise.

It is now buying back SoftBank’s ownership stake in Cruise for $2.1 billion. That’s a premium that puts a little money in SoftBank’s pocket.

What’s more, GM set up a new equity program where it will buy back vested shares from Cruise employees who would like to sell… That’s certainly unique.

Clearly, GM is doing whatever it can to claw back as much ownership in Cruise as it can.

This shows us that GM is convinced there’s something incredibly valuable in its self-driving division. The ride-hailing service in San Francisco must be going well… And that could open the door to similar services in pretty much every city on the planet.

So something big is going on here. We’ll be watching Cruise closely this year.

And this speaks to the larger trend that I’ve been pounding the table on: Self-driving cars are not years into the future, as many people believe. They are here now. And they are only going to proliferate in the months to come.

And for those who are prepared, they’ll lead to impressive returns. Readers can find more on that topic right here…

P.S. There isn’t much time left to learn about the Perceptron… an advanced AI my team and I have crafted to make up to six-figure crypto trades in around 60 days.