The last few weeks have seen an interesting kerfuffle between wireless networks Verizon and AT&T and the Federal Aviation Administration (FAA).

At the heart of the matter was the planned commissioning of their 5G wireless networks operating in the mid-band radio frequency (RF) spectrum known as the C-band.

Regular readers of The Bleeding Edge will remember the record-setting C-band spectrum auctions early last year. $81 billion of spectrum was sold, with Verizon responsible for $45.5 billion of that.

Naturally, when you spend that much money on spectrum, you want to start using it as quickly as possible. So companies like Verizon and AT&T have been feverishly working for the last year towards building their 5G wireless network in the C-band, which was scheduled for commissioning today, January 5.

And they were ready to do so in 46 cities across the U.S. But there is a wrinkle…

The FAA and an aviation group have been working to delay the launch. The concern is that the 5G wireless transmission may interfere with aircraft cockpit instruments, which could delay flights, especially in inclement weather conditions.

These dynamics between frequency bands are well understood in the industry. In fact, France has already deployed the C-band and adopted some radio frequency exclusion zones that help to ensure no interruption is caused by any RF interference.

The unfortunate news is that Verizon and AT&T agreed to delay their launch for a couple of weeks… And that means that “real” 5G services for consumers will also suffer a delay. The good news is that we’re just weeks away from these 5G C-band deployments going live.

For most consumers, this will be their first taste of what 5G technology is really like. The C-band is the goldilocks zone for 5G and wireless operators. C-band deployments can deliver the super-fast speeds and ultra-low latency that 5G technology is capable of, and still be economically reasonable to build.

For anyone who hasn’t experienced the 5G mmWave networks that Verizon has already launched, this is the next best thing, and it will be widely available once they launch.

This issue of RF interference is a big one. And the higher up in frequency you go, the bigger of an issue it becomes. And I know the one company that has both the product and the dominant intellectual property position that solves this problem.

Not only are its products in high demand, they are quickly becoming an absolute necessity for not only 5G, but also Wi-Fi 6 technology as well. This company should be in everyone’s investment portfolio. If you’d like to learn more, please go right here.

SpaceX is sending a spacecraft to ram into an asteroid…

A few weeks back, Musk’s SpaceX claimed yet another victory. The aerospace giant successfully launched one of NASA’s most interesting missions – DART.

DART stands for Double Asteroid Redirection Test. And just as the name implies, the mission is to send a spacecraft to ram into an asteroid. The physicists call it a “kinetic impact.”

We can think of this as the world’s first test of a planetary defense system. The goal is to see if a spacecraft that collides with an asteroid can materially alter its trajectory. 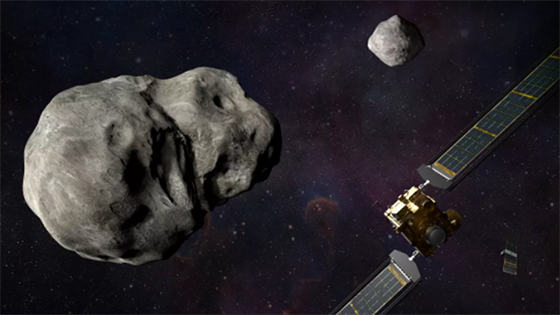 The spacecraft, which is about the size of a car, will target the smaller asteroid Dimorphos. The goal is to determine if the collision will affect the orbit of both Dimorphos and the larger Didymos.

And here’s the thing – the spacecraft doesn’t need to have some kind of outsized, explosive impact. If it can just affect the asteroids’ trajectory by a few inches, that would demonstrate that this kind of spacecraft could be used to successfully alter the course of an asteroid.

If there were a genuine threat to Earth, the key is to affect the asteroid’s trajectory when it is still at far distances from Earth. A relatively small kinetic impact that adjusts the trajectory of an object could potentially push the trajectory off by hundreds of thousands of miles by the time the object nears Earth.

The spacecraft will reach the asteroids in September, and we’ll get early results shortly after the collision occurs. From there, the European Space Association plans to send out another spacecraft to inspect the asteroids and do a more detailed analysis of the kinetic impact.

So right now it’s just a waiting game, but DART is on the way. I know that it might feel like an asteroid collision with Earth is the last thing we have to worry about right now, but they’ve happened before, and they’ll happen again. And as we know, they can be cataclysmic.

If this works, it will be very comforting to know that we have a reasonably good chance of protecting our planet from any asteroids large enough to present a threat. And it’s not an exaggeration to say that this could quite literally save the world.

DoorDash is building its own autonomous delivery robot…

Some interesting developments at DoorDash just caught my eye. The company recently filed a couple of patents directly related to autonomous delivery robots. This follows a string of about 40 other patents related to its delivery systems. DoorDash is clearly gearing up for a new service.

As a reminder, DoorDash is a popular gig economy company that delivers food and goods to consumers. Consumers order from their favorite stores or restaurants through DoorDash’s app or website, and then a DoorDash delivery person picks up the purchase and delivers it to the consumer. In return, DoorDash gets a commission on the sale.

And these latest patent filings certainly shine a light on the company’s future delivery strategy.

We know that DoorDash has been experimenting with autonomous robots made by a few other companies, most notably Starship Technologies. However, it seems DoorDash has decided to build its tech in-house.

Here’s a look at the robot design the company is working on: 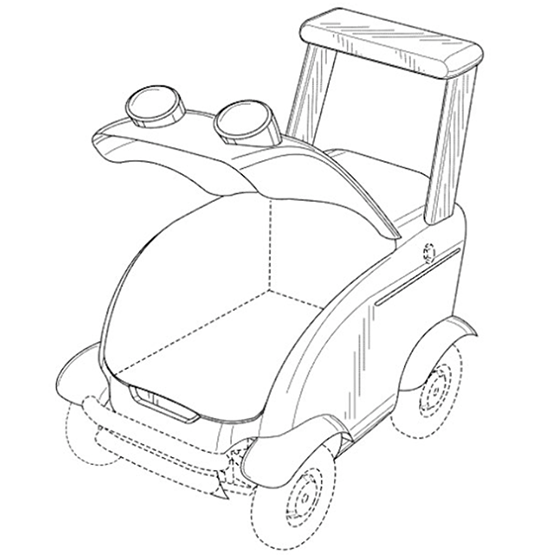 Here we can see a four-wheel design. And the robot has a front hatch that lifts up to allow consumers to retrieve their goods.

For perspective, the storage container can fit up to three 22-inch pizza boxes. That means it could fit two or three large grocery bags. And it could easily handle meal deliveries.

This reminds me a lot of Nuro’s autonomous robot, which we have discussed several times before. Yet DoorDash’s robot is larger. It will weigh as much as 200 or 300 pounds.

This robot will reach a top speed of 25 miles per hour – about on par with Nuro. However, that is far faster than the Starship robot that DoorDash ran pilots with, which could only go four miles per hour.

DoorDash’s design will have great ability to handle last-mile deliveries in urban areas. It’s easy to imagine this design fitted with cameras, LIDAR (laser imaging, detection, and ranging), and a touch screen as it shuttles down streets and sidewalks in urban neighborhoods.

What’s most exciting here is that all the technology needed to make this design a reality already exists. There’s nothing overly complex about implementing this technology based on where sensor technology and autonomous software are today.

For that reason, I expect we will see the company start to experiment with prototypes later this year. I’m excited to track one down, order some food, and see what the user experience is like.

This new NFT game highlights the power of Web 3.0 gaming…

We’ll wrap up today with a new game that has taken the blockchain community by storm. It’s called Wolf Game. And it demonstrates the power of Web 3.0 economics.

Wolf Game is a play-to-earn (p2e) game on the Ethereum blockchain that utilizes non-fungible tokens (NFTs). As a reminder, NFTs are digital assets that are cryptographically secured and authenticated on a blockchain. They have unique attributes and values.

For Wolf Game, only individuals who own one of the NFTs can play. And only 10,000 NFTs were minted. That creates an element of scarcity. 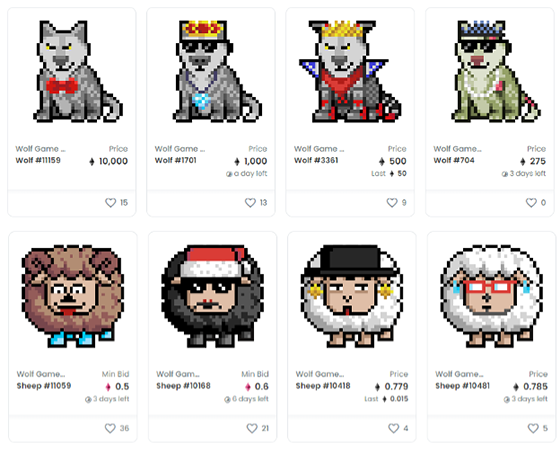 Here’s how the game works…

At launch, 90% of the NFTs minted were “sheep” NFTs. And the other 10% were “wolf” NFTs. Those who signed up to mint the NFTs didn’t know in advance which they would get.

Those who received a sheep could stake the NFT in order to earn another digital token called $WOOL. That $WOOL has market value, as it can be converted into Ethereum, which can then be converted into a fiat currency. Obviously, this is analogous to shearing the sheep and selling the wool.

When sheep holders go to harvest their $WOOL, though, they have two options. This is where the gaming element comes into play…

The first option is simply to give 20% of the $WOOL earned to the people holding the wolf NFTs. That leaves sheep holders safe with 80% of the profits.

The second option is to keep all the $WOOL… except this comes with a risk. If the owners of the wolves aren’t paid, the sheep owners no longer have protection. There is a 50% chance that a wolf will steal the $WOOL without that protection.

So there’s an element of game theory here. Every decision made comes with its own risks and rewards, each with varying degrees of probability. And it all plays out in a visually appealing setting. 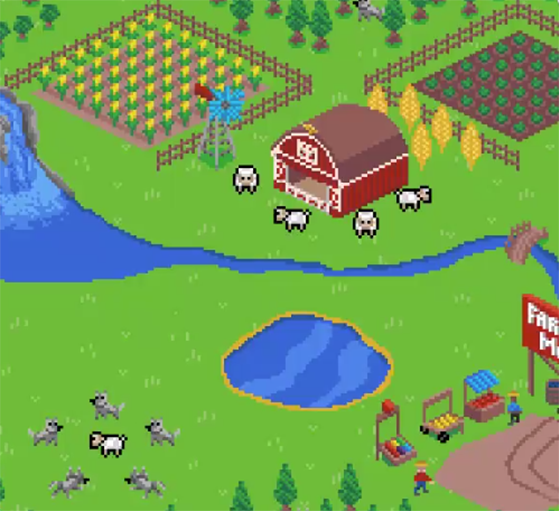 Because the game has these built-in economic incentives where players can actually earn money – Wolf Game NFTs have commanded an impressive market value very quickly. In fact, the NFTs collectively sold for about $52 million within just five days of launching.

A glance at the OpenSea NFT marketplace demonstrates this value. The top wolf NFTs are going for well over 100 ETH right now… That’s nearly half a million dollars at today’s market price. And as we see from the image above, some of these NFTs are listed for even more.

This has everything to do with the Web 3.0 economics built into the game. It starts with scarcity. Only 10,000 NFTs exist. And only those owning an NFT can play.

Then there’s an element of decentralized finance (DeFi) involved. The sheep NFTs produce the $WOOL digital asset for holders.

It’s a fascinating game design even though this might seem like a simple and silly piece of software. Play-to-earn games are going to get far more complex and interesting this year. Just imagine a Web 3.0 version of something like The Sims or Grand Theft Auto.

And as we look ahead in 2022, I’m confident it will be a record year for Web 3.0 gaming and metaverse development.

That’s why I’ll continue to keep my readers up to speed about the most exciting moves in this universe. If you’d like to see my recent recommendations, then simply go right here for more details.