As we look ahead into 2022, we’ll continue to see an acceleration in the development of both augmented and virtual worlds.

Both will advance at a rapid pace. At the forefront of augmented reality (AR) will be companies like Niantic, the creator of Pokémon Go, and Snap, which has long been a pioneer in the space. They will look to create their own versions of the metaverse as overlays on top of our real world.

Others like The Sandbox, Superworld, GreenPark Sports, Meta Platforms (Facebook), and many more will be racing to create completely virtual worlds for us to work, play, shop, gamble, and socialize in.

Even Zoom and similar platforms will further augment their services with graphic overlays. It won’t just be for collaboration, but for representation of participants as we want to be presented.

This will happen in the form of avatars. Some will be completely natural representations of us derived from capturing video in a variety of settings and outfits. This will enable us to take Zoom calls early in the morning, unshaven, in our pajamas, with our hair a mess.

Yet with the use of artificial intelligence (AI) and computer vision (CV), our facial expressions, head movement, and speech will be captured in real time. And these things will be used as the input for our lifelike avatar – who is showered, dressed, and ready for prime time.

In a metaverse, the likely default for our avatar will be some desired caricature of ourselves. We’ll likely have a few depending on which metaverse we’re hanging out in.

And that raises an important question… What will our avatars wear? After all, they are representations of ourselves. And we can’t send them in naked, can we?

Fashion – in the form of non-fungible tokens in the world of Web 3.0 – has caught fire in the last few months. It is a subsector of the NFT market that has exploded given all of the investment happening in metaverses and avatar-related technology.

Big brands are piling on like Gucci and Dolce & Gabbana. And interesting collaborations between hot designers and brands are happening left and right. 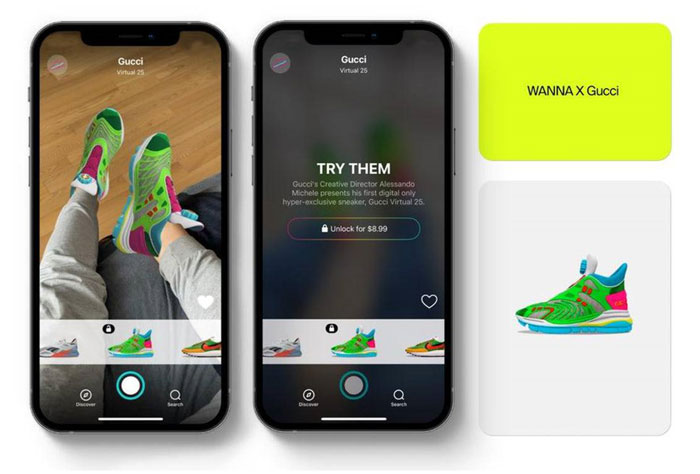 Applications like the one above are being used to “try on” an NFT and see what it looks like. These NFTs can be one-of-a-kind, or limited edition. Gucci’s very first NFT was sold last summer for $25,000 at an auction held by Christie’s.

Some NFTs will be purely digital… Others will be sold with a physical counterpart (digi-fizzy).

I recognize that this kind of thing might feel a bit like a passing fad, or a bit silly… but it’s not.

This is culture, and it’s lasting. The more time that we spend in digital worlds interacting, the more important our avatars become to us. They become a representation of both who we are, and more importantly, how we want to be “seen.” (To learn more about this revolution and how we can benefit from it, click here.)

A few weeks back, Morgan Stanley put out some research on this luxury NFT market with a €50 billion target market size by 2030. I suspect that the combined digital and digi-fizzy market for fashion will be even larger eight years from now.

Right or wrong, the desire to signal virtue, wealth, status, and style will only be amplified as the years pass. For anyone who prefers substance and character over signaling, the thought of this new world will feel uncomfortable.

But one thing is for certain… It’s happening whether we like it or not.

Technology that shrinks your camera by 500,000x…

Researchers out of Princeton and the University of Washington have produced new bleeding-edge camera technology that just might revolutionize the industry.

The research was recently published in Nature Communications, unveiling a camera the size of a coarse grain of salt.

Here is an image of the camera on top of a human finger. 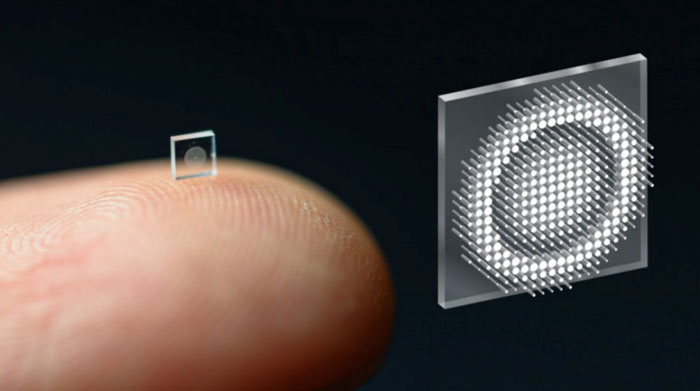 The ultra-compact microcamera can capture full-color images at the same quality and resolution as cameras 500,000 times its size.

That may sound impossible. And when you see just how tiny the hardware is, it seems even more mind-boggling.

Traditional cameras use curved glass or plastics to bend light into focus to produce an image, photograph, or video.

This new microcamera, on the other hand, uses a “metasurface” that is only half a millimeter in size. The metasurface has 1.6 million little posts that act as optical antennas to collect and bend the light.

But that’s not the only innovation here…

A neural network – a form of artificial intelligence – processes the light to produce a high-quality image. The AI is the key to synthesizing the data collected from the metasurface and rendering a high-resolution image.

These microcameras can be produced in much the same manner as semiconductors since they can use standard silicon manufacturing technology. This opens up the ability to scale up production at very low manufacturing costs.

Using these cameras in consumer electronics is low-hanging fruit. That’s because these microcameras will be much cheaper than the camera modules that are currently used in our phones, laptops, and home computers.

But the possibilities extend beyond that.

These cameras can be used for medical purposes, robotics, security or surveillance, augmented reality glasses, and more.

I am very curious to see what company licenses this technology and commercializes it.

Robotics are gaining a human element…

Last week was the annual Consumer Electronics Show (CES) in Las Vegas. This was the first show in a couple of years, but it was a fraction of its usual size. Pre-pandemic, CES brought in around 175,000 attendees. This year was a comparatively small 40,000.

But that doesn’t mean that there weren’t interesting technologies on display. One robot in particular created quite a lot of interest.

The robot, named Ameca, has facial expressions that are both incredibly lifelike and unsettling for that very reason.

Have a look below:

The company behind Ameca is Engineered Arts, based in the United Kingdom. The humanoid robot is predominately going to be used for movies and other content production.

But it is remarkable how the company has been able to demonstrate human expression in a robotic form.

Typically, when it comes to bleeding-edge robotics, the goal is agility, accuracy of a task, fine motor skills, and mobility.

Boston Dynamics has its agile robot that can perform parkour, dance, and even do flips. And Google’s Everyday Robots can do simple tasks like clean a table.

This is why I’ve been covering the coming age of automation with readers so frequently in recent months… (Find out more here.)

But what Engineered Arts is doing is much different. It is humanizing robotics.

It’s not hard to imagine a company combining an agile bipedal robot with fully autonomous AI software and then adding human expressions.

When viewed in that manner, this human element is something that has been missing to date in the field of robotics.

While Engineered Arts and its technology are incredible, what I find fascinating and almost a bit frightening is the direction robotics could go in just the next few years.

The crowdfunding platform Kickstarter announced it is making a major pivot in its business.

As a reminder, Kickstarter came on the scene in 2009 and was an early innovator in the crowdfunding space. Its business model was rather unique at the time, since projects on the platform did not issue equity in exchange for funding.

If somebody has a good idea, but needs capital to make it happen, they can list their project on Kickstarter and ask for prepayment for their product.

This gives the project money up-front. And when the product is ready, the people running the project can ship it to the early buyers. It’s a great platform – one I’ve used several times myself.

Kickstarter’s success is not really from big projects launching on the platform, though. That’s because the interest in these early projects tends to be fairly small – attracting only a few thousand or tens of thousands of capital at most.

Instead, the success comes from the wide user base of 19.3 million users.

Yet when you have lots of users making small payments, the fees that banks charge can really add up over time. Also, the multiday wait times and small nuances of working with dozens of banks can cause headaches in terms of accepting capital.

In order to reduce some of this friction, Kickstarter plans to launch its services on the Celo blockchain.

This makes a lot of sense. Celo is a mobile-friendly blockchain that uses your mobile phone number as a public key. This public key acts as wallet address to accept assets from anybody who knows your phone number. It is a simple method for sending money to your friends and family, simpler than any of the more common banking tools we know now.

In this way, Celo makes it easy to onboard customers for peer-to-peer transactions.

What’s more, Kickstarter will leverage this blockchain to use smart contracts. You can think of smart contracts as small computer programs that can automate a lot of processes.

For instance, a smart contract could check whether the buyer of a Kickstarter project meets various requirements and has made the payment. If everything checks out, the smart contract issues a token of ownership for the agreed-upon item in the future. That happens all without any middleman.

Smart contracts can also give the platform greater capabilities. Smart contracts, for example, can enable holders to sell their right to a project without the project creator losing any capital – or even prompt speculative activities around a hotly anticipated project.

As Kickstarter’s founder Perry Chen said, “[They can] unlock completely new ideas, tools, and use cases.”

He is exactly right.

And this move could be part of an even larger trend.

I’d imagine even other crowdfunding platforms that do allow equity and revenue sharing might move their services over to the blockchain for the same reasons as Kickstarter.

There is no reason to not tokenize equity in companies in this manner. This is simply one more step in the tokenization trend we’ve been following here in The Bleeding Edge. (To learn more about how to invest in this trend, please go right here.)

This has the potential to provide liquidity to a very illiquid asset class. Typically, shareholders of private equity need to wait years before they can sell. But with a tokenized version, investors could have greater flexibility to invest in the earliest stages of a company.

The technology to enable this has been around for years.

Sadly, the largest roadblock to making this a reality is a regulatory one. The U.S. Securities and Exchange Commission (SEC) has taken an adversarial stance against tokenization of equities. Because Kickstarter steers clear of equity, its project will be fine.

But for the rest of the crowdfunding industry, we’ll have to make progress on the regulatory front before we can see progress.