And unlike us Earthlings wishing for an economic recovery and a stock market that will go there – to the Moon, that is – the Orion spacecraft is actually there.

Well, in orbit, to be more precise. 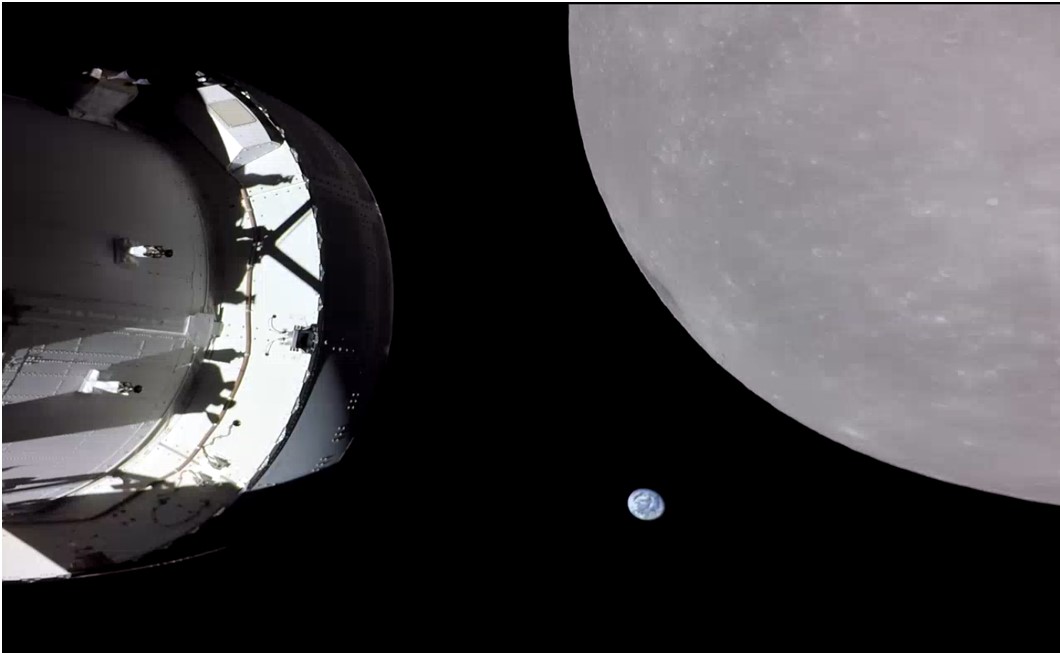 Taken yesterday, the above photo features the Moon with the Earth set in the background – just before Orion’s orbit takes it around the backside of the Moon. Quite a spectacular selfie.

The Orion spacecraft has already conducted a major burn in order to put itself into what’s called a distant retrograde orbit. That’s an elliptical orbit that circles the Moon in the opposite direction compared to how the Moon orbits Earth. The picture above was taken about 80 miles from the surface of the moon, its closest distance.

By next Monday – when we all get back at it after our Thanksgiving break – Orion will have reached its farthest point from the Moon in its orbit, at 57,287 miles.

At that point, it will set the record for the most distant passenger spacecraft from Earth in history, last held by Apollo 13 in 1970. Too bad there aren’t any astronauts on this journey…

If everything goes according to plan, Orion will return to Earth and splash down in the Pacific Ocean on December 11. Hopefully, it will bring some good luck with it when it returns…

A U.S. CBDC pilot will lead to a launch…

The Federal Reserve Bank of New York (the New York Fed) just announced that it’s launching a central bank digital currency (CBDC) pilot program. Whether we like it or not, it’s clearly happening…

As we’ve discussed, the federal government has been aggressively working toward an official U.S. dollar-denominated digital currency. It seems “they” now have the infrastructure in place.

The pilot will run for 12 weeks. And several major U.S. banks will participate to test the technology, including Citibank, U.S. Bank, Wells Fargo, PNC Bank, Bank of New York Mellon, and TD Bank. Credit card giant Mastercard will also participate in the program.

The timing here isn’t a coincidence.

We talked earlier this month about how JPMorgan has been experimenting with blockchain technology for cross-border transactions.

At the time, we noted that this was a precursor for things to come. JPMorgan has very close ties to the Federal Reserve. So if it was using blockchain technology, the Fed knew about it.

Sure enough, the Fed is following suit here.

And when we look at who’s participating in the CBDC pilot program, they’re all legacy financial services companies. There’s not a single blockchain company in the mix.

So the Fed’s pilot program is using a version of blockchain technology without any companies that have actually built blockchain platforms before. That’s telling.

Clearly, the Fed wants to implement a CBDC in a way that keeps the current order intact. This is how it protects the incumbents from disruptive blockchain companies and technology.

I should also point out that there’s nothing decentralized about the Fed’s CBDC pilot. The version of blockchain tech it’s using isn’t open and transparent. And it certainly features central points of control.

That said, the Fed was clear that this pilot will focus on “wholesale” applications.

That means the transfers of money from one financial institution to another, or from the Federal Reserve to member banks. It can improve settlement speeds and costs without ceding “control” to a blockchain start-up like Ripple.

Of note, the Fed didn’t talk about using a CBDC for retail applications… yet. That is to say, there’s no indication here that the Fed sees its CBDC as something individuals will use in daily transactions.

If we remember when China rolled out its own CBDC pilot two years ago, it incorporated about 50,000 Chinese citizens into the program.

These citizens received a digital wallet with a certain amount of the CBDC in it. Then they were free to go spend their CBDC funds to test out the platform. I’ll have an interesting development on this point in tomorrow’s Bleeding Edge.

But for now, that’s not what’s happening with the Fed’s pilot. It’s exclusively for back-end settlement. The question is: Will it remain that way? Or does the Fed envision a retail-facing CBDC as well?

This first pilot will run through the end of the first quarter. I predict to see some major announcements follow shortly thereafter. We’ll certainly be tracking them very closely.

Tesla is years ahead of the competition…

General Motors (GM) just made an announcement that I found quite interesting. This confirms what I’ve suggested all along: Legacy carmakers are years behind Tesla.

Speaking at a conference, GM announced a strategic partnership with Brazilian mining giant Vale. This is all about securing materials for electric vehicle (EV) battery production. Vale will provide GM will battery-grade nickel.

But get this: The partnership starts in 2026. It’s almost four years out.

GM is following the Tesla playbook here. Tesla has been aggressively inking future partnerships like this. It’s necessary to secure the critical materials needed for EV production.

The thing is, Tesla has been doing this for years. The fact that GM is just getting around to it is telling.

GM clearly recognizes the weaknesses in its supply chain. There’s simply no way for the company to meet its EV production targets right now because it doesn’t have access to the raw materials needed for EV battery production.

The industry has long projected that EVs will reach price parity with equivalent internal combustion engine (ICE) vehicles when EV batteries can be made for $100 per kilowatt hour (kWh).

In other words, when the cost to produce batteries gets down to this specific level, EVs will cost about the same as gas-powered cars.

Well, GM is now saying that number has to get to $70 per kWh for EVs to hit price parity. And it doesn’t see that happening until later this decade.

This is the first time I’ve seen a major automotive company acknowledge that we have a long way to go before EVs are as affordable as ICEs.

And it gets worse…

The cost to produce EV batteries is going up. This chart tells the story: 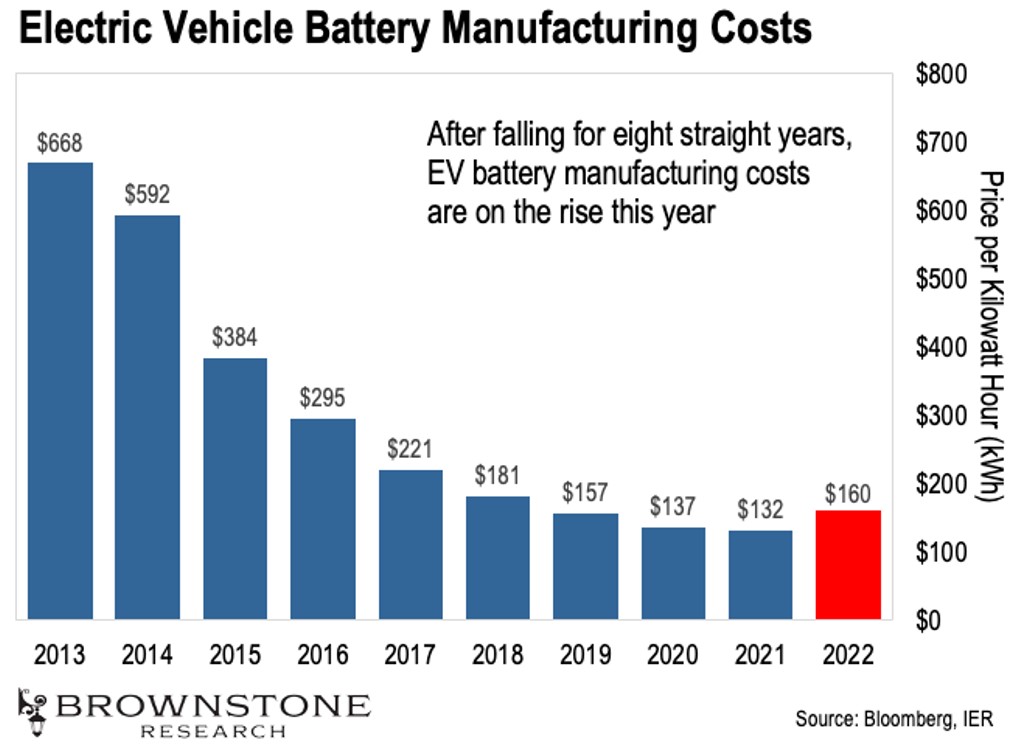 The big takeaway here is that the industry’s EV projections have been far too aggressive. And they clearly didn’t account for the shortage of raw materials and the impacts of inflation.

That means Tesla is way ahead of the game here – and far more than most recognize. It’s the one company that’s been forward-looking with regard to its supply chain.

This breakthrough will be adopted by the AR industry…

We’ll wrap up today with a major technological advancement from the Industrial Technology Research Institute (ITRI) in Taiwan.

The ITRI just developed an ultra-high resolution micro LED display that’s far superior to anything on the market today. This has huge implications for augmented reality (AR)-enabled eyewear.

As a reminder, AR-enabled eyewear allows us to have a mixed reality (MR) experience where our normal field of view is overlayed with data, images, graphics, and even video… all in real-time.

We’ve been tracking this theme for years.

Imagine wearing a pair of AR glasses and being able to see text messages, emails, and even driving directions right in our field of view. Anything we can do with our smartphones today could be done hands-free with AR-enabled eyewear.

This is the next generation of computer interface technology. And next year is when the technology starts to go mainstream.

The problem is that the glasses need to be small enough for people to wear them comfortably for extended periods of time. Nobody wants to walk around wearing big, bulky goggles.

The biggest challenge of AR technology isn’t the computing systems, it’s the display technology. The industry has been working hard to develop semiconductor technology that will power high-resolution, very bright displays capable of operating with relatively low power consumption.

And the ITRI may have cracked the code.

Its micro LED display is integrated into a compact design of less than 0.5 inches. That’s small enough to fit in a normal pair of glasses.

And this same display has power consumption that’s less than 1 watt. That’s twice as efficient as the high-end display technology in use today.

Yet the ITRI’s display is capable of over 2,000 pixels per inch. That’s a far greater resolution than current eyewear displays. Equally important is that it’s capable of brightness of 20,000 nits. That’s 10 times greater than current technology. This is critical when using AR glasses outdoors in the sunshine.

This could very well be the final piece of the puzzle. Whenever we see performance jumps this great, major breakthroughs around applications follow.

When organizations like ITRI make a breakthrough like this, they look for commercial partners that they can license the technology to. And given how integral the Taiwan market is for contract manufacturing of consumer electronics, we can expect a handful of companies licensing this tech to incorporate it into their AR glass designs.

We should expect to see two or three major new product announcements next year with AR/MR glasses and lens technology. This will be the start of a major shift in how we interact with and use computing systems.