Standing in stark contrast to Tiger Global’s recent hedge fund debacle is Tiger’s presence in the venture capital markets. One of the more unpleasant developments over the last two decades has been the increasing presence of hedge fund capital into the private markets. It too creates distortions of its own kind.

Tiger’s venture investing started to get serious in the 2007/2008 timeframe, from which it started raising $1 billion + funds. But things only started to get exciting in the last two years. Tiger raised a $3.75 billion venture fund at the beginning of 2020, and a follow-on last January of an additional $6.66 billion.

And that meant that it needed to deploy the capital… quickly. That’s where the distortions are created. Below we can see a chart of the number of private investments made by Tiger each quarter since 2015. 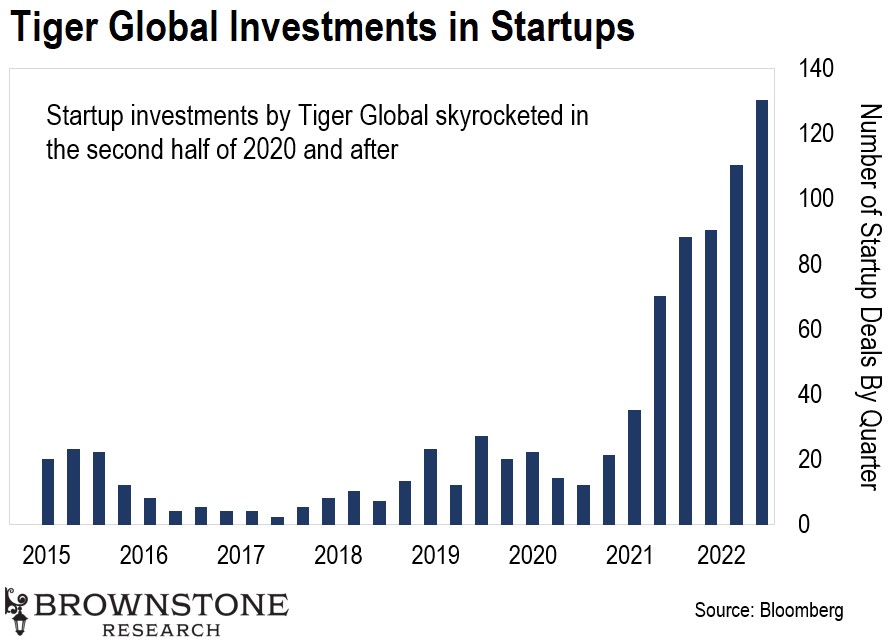 We can see that Tiger’s pace from 2015 through early 2020 was more reasonable. It managed to do anywhere from a handful of deals to around 25 each quarter. But look what happened in the second half of 2020 and after…

It’s hard to imagine how that’s even possible. What happened?

In addition to the billions raised in early 2020 and 2021, Tiger took in another $12.7 billion in October last year. In total, that’s more than $23 billion in capital that needs to be deployed into private venture deals.

And in the world of private equity and venture capital, the rule is “use it or lose it.” These funds typically make a 2% management fee for assets under management. That amounts to $460 million across the three funds just for deploying the capital.

On top of that, they receive around 20% of profits. The rest, assuming there are profits, are returned to the limited partners who invested in Tiger’s venture funds.

To deploy that much capital so quickly in the world of venture capital, Tiger’s approach had to be different. It took what is largely a hands-off approach, not demanding board seats or onerous conditions that are so often imposed by venture capital firms.

And Tiger is now known for writing large checks at elevated valuations. Fast money… which is very similar to the way that Softbank managed its venture funds as well.

The largest market distortion has happened at the later stage of venture capital rounds. While Tiger does invest small amounts in seed rounds, most of its capital is late stage, and this is out of sheer necessity. That’s where more capital can be deployed quickly.

This kind of capital is fueling the growth of the next wave of technological innovation. It is providing the growth capital that well-established private companies need, to prepare to ultimately become publicly traded companies (or get acquired by one).

And this all happened amidst the current economic and geopolitical chaos. In other words, not only did it not stop, it continued to ramp up.

There was a sophomoric article in the Wall Street Journal this week titled “Tech’s Decade of Stock-Market Dominance Ends, For Now.” It ignored all the record levels of growth and investment that have happened over the last three years, as well as the investment that is happening right now. The author’s view was myopic and just looking for a bold headline.

While Tiger’s trading in the public markets caused chaos, and its presence in the private markets pushed up valuations in late-stage companies, it’s not all bad. Many of those venture investments will have a lasting impact on the next wave of great companies that will eventually reach the public markets.

Just as remarkable companies emerged from the rubble of 2000, and the aftermath of 2008/2009, we’re in for an even greater wave of growth after the 2022 “distortion” has passed.

I trust most of us are familiar with dinosaurs and their extinction event. The most probable explanation is that a massive asteroid hit Earth and completely disrupted Earth’s climate. This caused the dinosaurs to die out.

However, I suspect most of us didn’t know that there is an organization working around the clock right now to ensure that this does not happen again. It’s called the Asteroid Institute. Those of us familiar with the organization call it “B612.”

Researchers at B612 are working to map out all the asteroids in our solar system as well as those that could potentially enter it. Their sole purpose is to find any asteroids that may be on a path to collide with Earth. If identified early enough, we will have the chance to destroy or divert it.

And B612 just made a major announcement… The team unveiled an advanced algorithm capable of analyzing many different images of the same asteroid to determine its trajectory. They call it THOR.

What’s so interesting here is that THOR takes images from many different telescopes in a wide variety of physical locations. This gives it multiple angles of the same asteroid.

The algorithm then calls on massive computing power to align the points of light from every image, and that enables it to calculate the asteroid’s trajectory.

Here’s a visual to give us a feel for how it works: 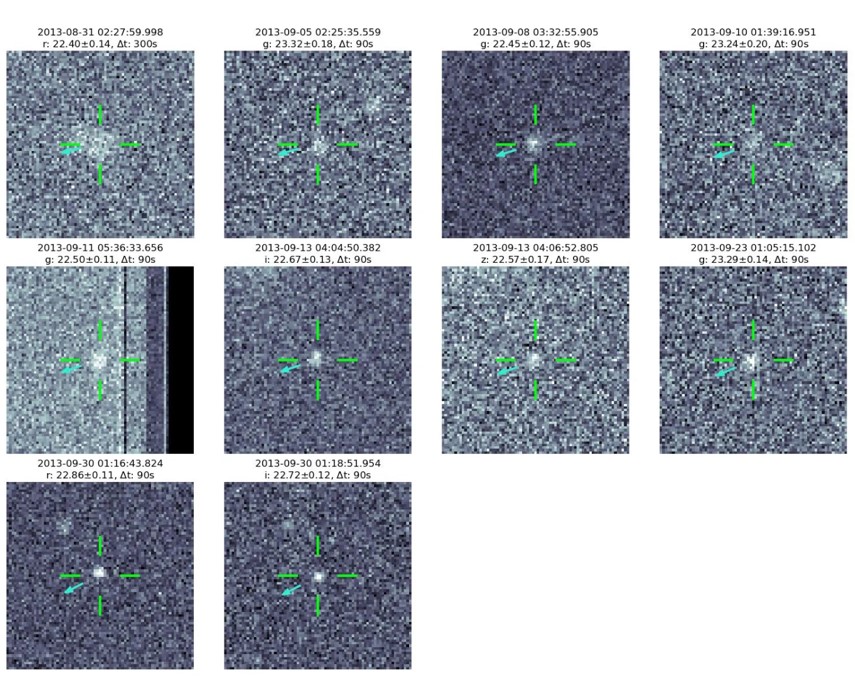 Here we can see a variety of images of the same asteroid. THOR gauges the points of light from each to calculate its path.

This is only possible with the massive amount of computing power available to us today. That’s why exascale computing is so important, as we discussed yesterday.

I know skeptics may wonder why we should bother with this. After all, asteroid collisions are incredibly unlikely. And even if we identified a problem, what could we do to stop it?

Yet regular readers may remember that SpaceX is collaborating with NASA on its DART mission. We talked about this back in January.

DART stands for Double Asteroid Redirection Test. And just as the name implies, the mission is to send a spacecraft to ram into an asteroid. The physicists call it a “kinetic impact.”

We don’t need to have an outsized or explosive impact on the asteroid… as long as we catch it early.

If the asteroid is still a long way from Earth, all we need to do is alter its trajectory by a few inches. That’s enough to change its course by hundreds of thousands of miles by the time it nears Earth.

So I’m very excited about the work B612 is doing. I think it’s a noble cause.

And readers may be surprised to hear that B612 is a nonprofit that is funded entirely by private donations. Not a cent of taxpayer dollars goes to it.

In fact, I have donated to the organization myself. I like the science and the mission. And I think this is a great example of important work that doesn’t get much attention.

Hollywood is going all in on Web 3.0…

We’re seeing the start of a trend in the film and content production industry out in Los Angeles. Filmmakers are starting to think about producing content that they can expand into non-fungible tokens (NFTs) and blockchain-based “play-to-earn” games.

In other words, Hollywood is starting to lean into Web 3.0.

For example, the industry is working on a new science fiction (sci-fi) project called Runner right now. Bryan Unkeless is producing it. He was the co-producer of the hit franchise The Hunger Games.

What’s unique about Runner is that they are producing it strategically so developers can create NFTs and Web 3.0 games based on the franchise. Here’s a great image of the world in which Runner takes place:

The World of Runner 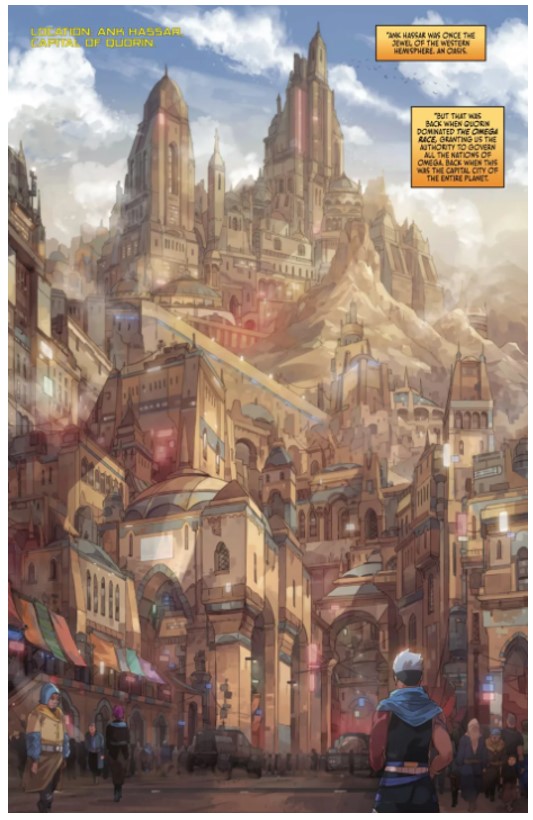 This is certainly a vivid and unique city in which the characters live. It’s easy to imagine players being able to explore this world in a Web 3.0 game.

And there’s a fun sci-fi angle to the story as well. The characters in Runner have developed cars that can travel through wormholes in space to reach other worlds. Here’s a great image:

From a Web 3.0 perspective, it’s easy to envision these vehicles being NFTs that double as functional cars within a game.

So we’re witnessing a major shift in how Hollywood thinks about producing content, and how that interacts with technology. It’s not just about hit movies and TV shows anymore. Web 3.0 opens up an entirely new universe.

I’m very excited to see this shift… especially because developers in the Web 3.0 community aren’t known for creating these big thematic ideas and storylines. They are far more tech-centric. So there’s something of a symbiotic relationship forming here.

For those interested, Runner will have some cool comics coming out, and then soon after that, NFTs and the game. This is one to check out.

And for investors, this represents a major opportunity. For more information on how to profit with Web 3.0 as NFTs gain mass adoption, simply go right here.

Cruise hit yet another major milestone…

If we remember, Cruise received approval to launch a completely autonomous ride-hailing service in parts of San Francisco back in February. However, Cruise did not have regulatory approval to charge for these rides. It’s been running the service at the company’s own expense.

And that’s why today’s news is so important… Cruise can finally commercialize its service. It will still run between the hours of 10 p.m. and 6 a.m. local time – but that will soon be the next domino to fall.

Right now, Cruise has 30 self-driving cars running as part of the San Francisco ride-hailing service. The next step is to get approval to run 24/7. That’s when we’ll see Cruise deploy more vehicles as part of its fleet.

Cruise will also look to expand out past San Francisco. I imagine spreading coverage into Silicon Valley to the south will be the next move.

So this is a breakthrough in the industry.

I remember not too long ago when all the experts were saying that self-driving cars were at least a decade into the future. Of course, I consistently suggested that the tech was much further along than anyone realized… and here we are. It’s happening right now.

We’ll see a lot more developments on the autonomous driving front as we move into the second half of 2022. It’s going to be an exciting year.