Tiger Global Management isn’t the name of a firm that I would expect most to recognize. It received its initial funding in 2000 from Julian Robertson, who came into fame in the 80s and 90s when he built hedge fund giant Tiger Management.

Robertson ended up shutting down Tiger Management in 2000 as the dot com boom began to burst. Large investors started withdrawing their funds, which resulted in a lot of forced selling – not dissimilar to what we have seen earlier this year.

At the end of last year, Tiger Global was managing a massive $23 billion hedge fund. And it was aggressive in deploying that capital.

Tiger is known for leaning into large positions in hot stocks… seemingly without any regard at all for valuation. It’s the kind of fast money that tends to cause large distortions in markets that never last.

By way of example, some of Tiger Global’s top holdings were Carvana, Snowflake, Zoom, and Crowdstrike; all companies that I predicted were destined for massive falls – as much as 80% – because of their ludicrous valuations. It’s not that they were bad companies, it’s just that they were grossly overvalued.

And that’s exactly what happened… they crashed. And so did Tiger Global. That $23 billion in hedge fund assets at the end of last year is down 52%. Tiger Global managed to lose about $11 billion of its limited partners’ capital.

There were others just like Tiger Global that were doing the same thing. And yes, the same thing happened to them as well. This resulted in a rash of forced selling on a far greater scale than in 2000.

But it’s the same dynamic. As limited partners want to pull their funds out of the hedge funds that are losing money, the hedge funds must sell assets to manage the redemptions.

And that’s what results in the opposite end of the spectrum – grossly undervalued equities. In other words, great companies selling at amazing prices. We’re seeing a lot of that right now.

The good news is, normal investors surprisingly have an advantage over hedge funds. Our timeframes can be very different.

We aren’t forced to deploy capital quickly, and we don’t have to worry about our quarterly performance or limited partner redemptions. And long-term capital gains are the most tax-efficient way to grow our wealth.

And the one thing that we can be sure of, concerning hedge funds, is that once their forced selling stops and they write off the “bad quarter,” they’ll be right back into the markets just as quickly as they left. As long as we have shares in great companies at attractive valuations, we know that share prices are going higher over time.

Tomorrow, we’ll have a look at the other side of Tiger Global’s business… its approach to deploying capital into private companies.

We’ve crossed the threshold of exascale computing: U.S.-based Frontier just overtook Japan’s Fugaku as the most powerful supercomputer on Earth.

It was almost exactly two years ago when Fugaku became the world’s fastest supercomputer. At the time, Fugaku was 2.8 times faster than the previous incumbent.

So Fugaku’s performance was mind-boggling at the time. But it pales in comparison to Frontier, the new number one.

Frontier is capable of 1,102 petaflops per second. That’s more than double Fugaku’s speed.

So we have finally entered the age of exascale computing. This is an incredible breakthrough.

Frontier is located at the Oak Ridge National Laboratory in Tennessee. The U.S. Department of Energy (DoE) manages the supercomputer. And it has some interesting applications planned.

As regular readers know, I see nuclear fusion technology as the future. It can enable a decentralized power grid that’s far more resilient than what we have today. And it produces 100% clean energy with little to no waste.

Of course, Frontier could do a lot of other interesting tasks as well.

It could develop new molecular compounds for drug development and advance materials science. That’s something I see as an especially good use case.

The supercomputer could also model the Earth’s climate. This is something that’s been out of reach simply because we haven’t had the computing power necessary to do it. Exascale computing now brings advanced climate modeling within range.

It’s exciting to think about what breakthroughs will happen because of this kind of computing power.

With that said, now the race is on to see who can build an even more powerful supercomputer to supersede Frontier. China reportedly has one or two under development that are progressing fast.

Exascale computing, coupled with breakthroughs that we are now seeing in quantum computing, means that we’re on the cusp of rapid acceleration in technological breakthroughs. Moore’s Law isn’t slowing down, it’s speeding up.

For most, this will be uncomfortable. It won’t be a natural pace of change, but it’s coming whether we like it or not. Let’s hope we manage these newfound “powers” for peaceful purposes.

Unlocking precision medicine for the masses…

Soon, genetic sequencing will be as common as getting blood drawn.

A startup in the genomic sequencing space, Ultima Genomics, has cracked the code for sequencing a whole human genome for just $100.

This is the magic number…

We have talked about this dynamic before. For the sake of new readers, whole-genome sequencing is the process of determining a person’s unique DNA makeup. It unlocks the blueprint for an individual’s genetic code.

This is quite different from what companies like 23andMe and Ancestry.com do. These companies offer genotyping services, which have been around the $100 price range for years now.

Genotyping does not sequence the entire genome, however. It simply spot-checks it for specific genetic variants. This can provide valuable insight… but nothing compared to full genome sequencing.

So why is the $100 figure so important to whole-genome sequencing?

Simply put, that’s the threshold that will unlock health insurance coverage. At just $100 per patient, health insurance providers can cover full genome sequencing for all patients. This will make it available to everybody… effectively bringing precision medicine to the masses.

For example, BGI Group, a Chinese sequencing company, claimed it can deliver $100 sequencing. But the company has yet to prove it. That, of course, leaves me skeptical.

For Ultima Genomics, however, the proof is in the funding.

This company just came out of stealth with a massive $600 million raise. And it’s backed by some of the biggest players in the venture capital (VC) community. This includes Andreessen Horowitz, Founders Fund, General Atlantic, Lightspeed Partners, Playground Global, and Khosla Ventures.

We still need to see Ultima back up its $100 sequencing claims with third-party validation. But the pre-print of its research looks very promising. And there’s no way these big-name VCs would pour $600 million into an early stage company if it hadn’t made a breakthrough of this caliber.

This is a fantastic development on the precision medicine front. And it’s going to force genetic sequencing giant Illumina’s hand…

Illumina currently dominates the sequencing industry. The company has a near-monopoly with roughly 90% market share.

Right now, Illumina’s current technology can sequence a human genome for around $500. We know the company has the technology necessary to lower costs, but they just haven’t needed to because there hasn’t been much competition.

The rise of Ultima Genomics will change that dynamic. It will force Illumina to release its next generation of sequencing technology. And that will only hasten the mass adoption of genetic sequencing.

It may sound like this is bad for Illumina, but it’s not. Illumina will sell a magnitude more in sequencing machines and consumables. The market opportunity is going to become that many more times larger.

And there is absolutely room for a few more players as there is so little adoption to date.

So I’m very excited to follow Ultima Genomics going forward. This company is primed to become a major player in the sequencing space and there’s no way that Illumina would be permitted to acquire this company.

And best of all, the affordability of whole-genome sequencing will be a major boon for human health. It will enable everyone to catch any genetic mutations they may have early. And that, in turn, will help us address problems before disease sets in.

In fact, I envision a world in which parents sequence their children at birth to catch any potential mutations. That opens the door to much earlier treatment that could help eradicate genetic disease entirely.

And we’ll see health care costs plummet as a result. That’s because it will no longer be necessary to run expensive and unnecessary tests, searching for the problem, or have patients try out different drugs, looking for what works. Instead, full genome sequencing for $100 will provide the answers.

Regular readers may remember Campfire. We profiled it in May of last year. This early stage company produces a sleek VR headset designed specifically for collaborative functions in an office setting.

What sets Campfire’s VR design apart is the holographic projector that works in concert with the headset: 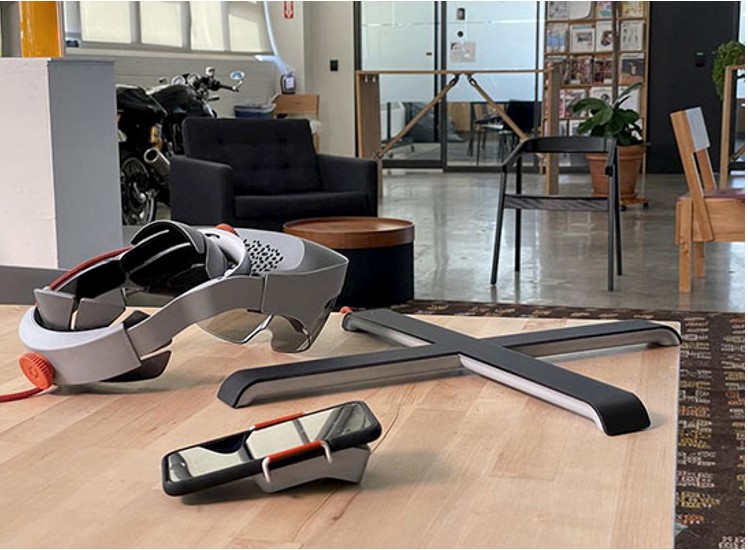 Here we can see Campfire’s VR headset to the left. The X-shaped holographic projector is to the right. And the control pad that connects to the smartphone is in the foreground.

Campfire’s new Studio Console product adds a modular floor mat to the mix. Users connect these floor mats (seen underneath the users in the picture below) in their own individual spaces, and that creates the boundaries of a virtual room in which people can collaborate.

This image gives us a visual of how it works: 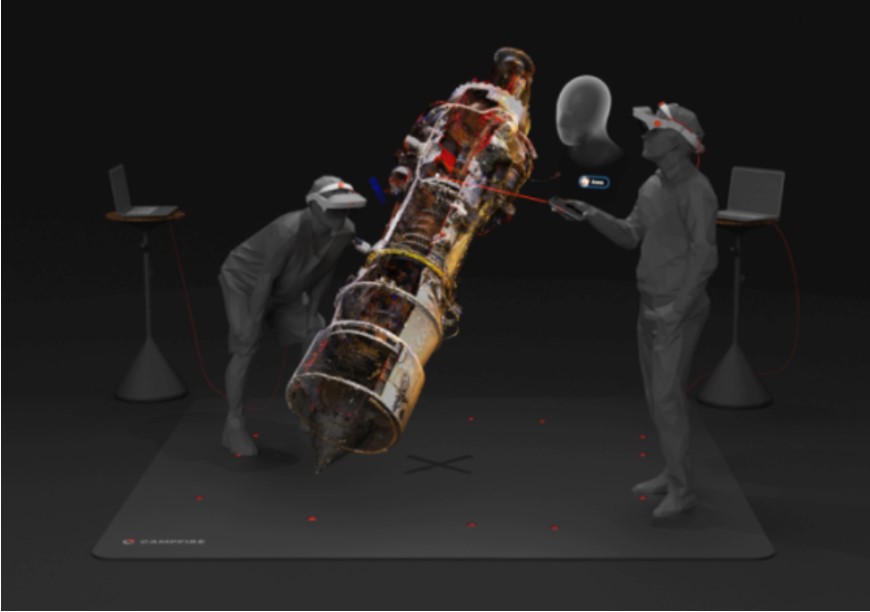 Here we can see the modular floor mats connected in a square pattern on the floor. That forms the boundaries of the virtual workspace.

I love this. This product has incredible implications from a design perspective. It takes something that we are used to designing on a flat screen and projects it holographically to scale.

Being able to visualize, manipulate, and iterate with a complex object like a jet engine, in the form of a 3D holographic image, can be game-changing.

This allows people to work with the item with their own hands rather than with a keyboard and mouse. They can turn it, spin it, open it up, or do anything else they want to with the object, to make sure that every nuance of the design is optimal.

There’s nothing like being able to work with something in real-time. Seeing things in a hands-on manner like this will enable better product design, and it will also lead to some great ideas. I can easily see this approach becoming the future of engineering.