A reckoning was inevitable.

The idea that we can all work remotely, free of normal office interactions and in-person meetings, and continue to maintain productivity levels was always fanciful at best.

Yes, sole practitioners, freelancers, writers, and others who do not need to actively collaborate on a daily basis with colleagues can manage such a lifestyle. But a large enterprise responsible for building and shipping products, and managing tens of thousands of people, cannot.

And that was Elon Musk’s point.

The internet lit up in controversy last week when two of Musk’s internal e-mails leaked out. The first, shown below, was sent to Tesla’s management team last Tuesday. 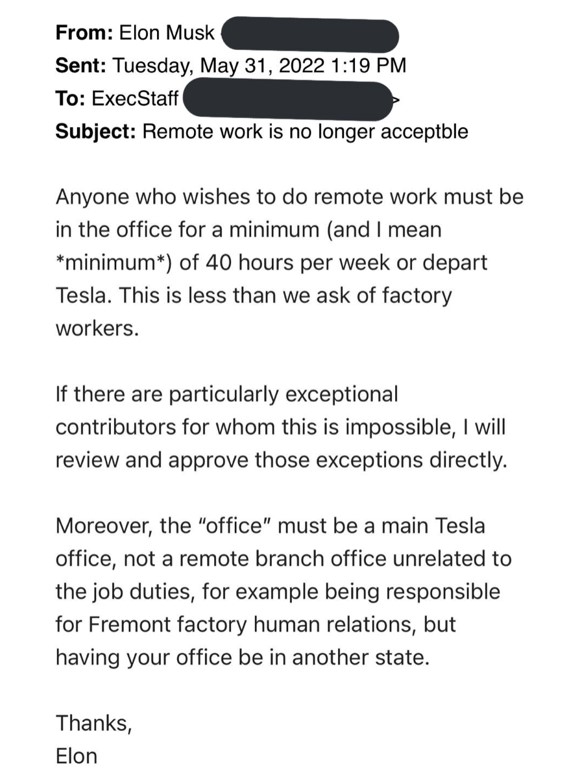 The message was very clear: Get back to the office, full-time, or “depart Tesla.” That should have been enough, but apparently, there was some confusion over the first communication… which resulted in Musk sending a follow-up as shown below. 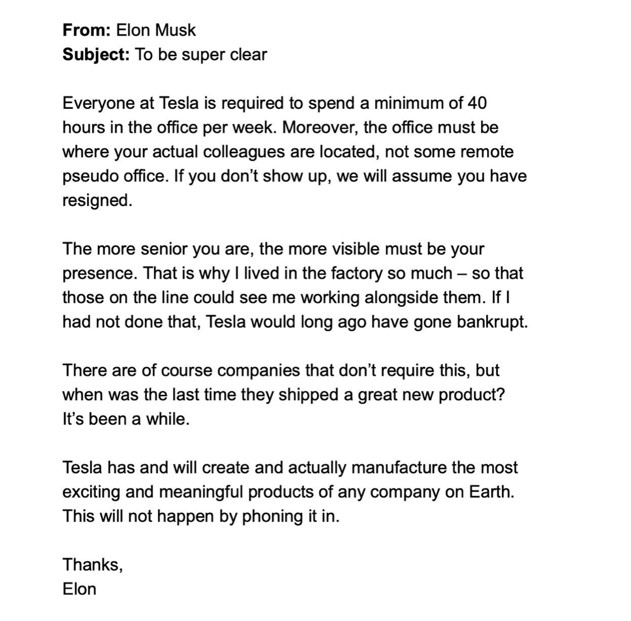 The second was even more direct… “If you don’t show up, we will assume you have resigned.” Things must have come to a head for Musk to have been so direct.

The reality is that this kind of tension exists in just about every company today. And the ways of dealing with it are all over the place. Some companies have determined that remote work will be permanent, and others, like Tesla, believe that they have a necessity to return to the office full-time.

We can even see the tension in the jobs numbers. This April, 4.4 million people in the U.S. quit their jobs. What makes this so surprising is that in times of economic turmoil, most tend to be conservative and hold on to the jobs that they have. Yet the Great Resignation continues…

After a couple of years of enjoying the flexibility and comfort of working from home or any preferred remote destination, many want the lifestyle to persist. And with so many unfilled jobs available right now, the balance of power leans towards the employees, not the employer.

Tesla and many other companies will have to return to the office out of sheer necessity. Businesses that are innovating and building – ones that require a constant stream of optimization, iteration, and problem-solving – need to be collaborating in person. Not doing so can not only result in less productivity; in time, it can result in a failed business.

This reckoning will persist. Companies are going to have to make choices about corporate policy clear and decide what trade-offs they are willing to make. Most will end up choosing a hybrid work model that will balance the trade-offs for both employee and employer.

And that means video conferencing and hybrid meetings are here to stay. This has been a very active area for early stage startups.

And in the issue of the Near Future Report going out tonight, I’ll be recommending one of the companies that’s going to enable the hybrid work trend…

A revolutionary approach to nuclear fusion…

A new nuclear fusion startup in Seattle just came out of stealth mode. And the work this company is doing could be the most exciting approach to nuclear fusion yet…

The company is called Avalanche Energy. And it is using an “orbiting ion trap” to produce a fusion reaction. This is much different from the large, heavy-magnet approach employed by the tokamak designs we have discussed before.

It’s designed to trap an ion in a chamber under incredibly high voltage. Then it fires other ions into the trapped ion. The high-voltage conditions cause the ions to collapse into one another. Then they fuse and release an enormous amount of energy.

So instead of using incredibly high temperatures like tokamaks, the Orbitron uses high voltage: 600,000 volts, to be precise. For context, a large 12-volt battery is all that’s needed to run power-intense appliances like refrigerators and air conditioners.

What makes Avalanche’s approach so compelling is that it redefines what a compact nuclear fusion reactor looks like. 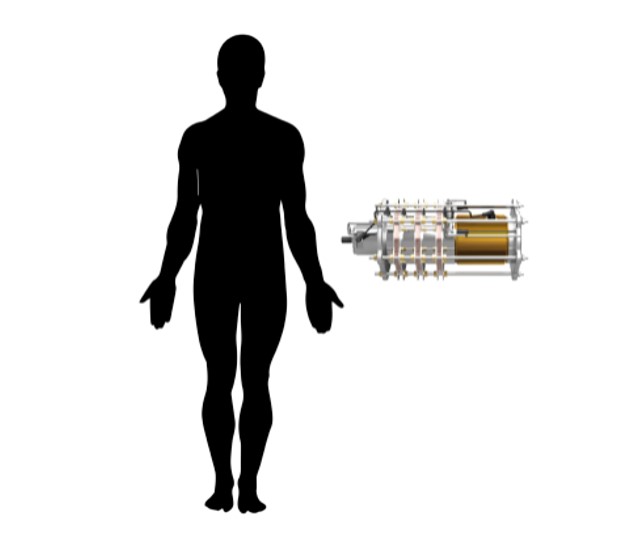 This is the Orbitron scaled to size. We can see that it’s roughly the size of a normal microwave oven. This redefines what a “compact” nuclear fusion reactor might look like.

For comparison, some of the compact fusion reactors that we have taken a look at in The Bleeding Edge fit in a semi-trailer, or inside of a small building.

The Orbitron, however, could be packaged and sent as a normal freight package. And given the size of the reactor, we can imagine that the power that it could generate might be used to fuel a ship, a train, a truck, or even a plane. And they would be great for off-the-grid applications for power generation.

Imagine what it would be like to have a device like this powering a small neighborhood. Aside from the upfront cost of purchasing and installing a reactor like this, it will produce more energy than is required to maintain the reactor, which means 100% clean, free, and limitless energy.

I’m rooting for Avalanche. There will, of course, be a need for large, utility-scale nuclear fusion power plants, but having these small, compact reactors would provide incredible utility and open up a wide range of applications that would have otherwise not been possible.

Moore’s Law is alive and well…

As regular readers know, I periodically refute “experts” who say that Moore’s Law is reaching its limits.

For the sake of newer readers, Moore’s Law refers to the observation that the number of transistors on a microchip doubles every two years. This leads to an exponential increase in computing power over time.

Skeptics point to the fact that at some point, we won’t be able to make semiconductors any smaller. But that just hasn’t been the case. And a new breakthrough in micro-robotics demonstrates just how small semiconductors have gotten:

A Micro-Robot on a Penny

This is a micro-robot walking on the edge of a penny. Engineers at Northwestern University designed it.

I don’t think many of us carry around coinage anymore, but anyone who has a penny lying around can get a sense of just how tiny this thing is. For context, the robot is about half a millimeter in size. That’s smaller than a flea.

And the robot is remote-controlled. It can walk like a little crab upon command. The robots are dexterous enough to walk on the edge of a coin, as shown above. They can even slip into the eye of a needle. That’s how small they are.

I have to say, this is a little creepy. Something about tiny robot crabs running around is a bit unsettling. That said, we can imagine some fantastic applications.

One of the big areas that come to mind is medical care. I can envision deploying micro-robots like this to go into the body of a patient and clean their arteries. That could replace the need for invasive procedures and even heart surgery. And of course, it would be far cheaper as well.

Then there are industrial applications. These robots could build microstructures that are too small for normal manufacturing machinery. They could also clean and repair heavy machinery.

And here’s the thing – tiny semiconductors power these robots. That’s Moore’s Law at work. And it’s not going to stop…

As we speak, Taiwan Semiconductor Manufacturing (TSMC) is working on 1 nanometer (nm) semiconductors. It’s the most advanced semiconductor manufacturing process that’s ever been developed. There is a clear drive toward achieving this scale, and it will push the limits of materials science and manufacturing technology.

So please, the next time we hear someone say that Moore’s Law is dead, let’s ignore them. There is a lot more to look forward to with semiconductor technology for the remainder of this decade.

And when it comes to computers, the exponential growth in computing power will happen at an accelerated pace due to the developments in quantum computing. Ironically, one of the most exciting applications of quantum computers is to use them to discover new materials, which will only fuel even more interesting developments with semiconductors.

We’re in for some incredible technological developments as a result.

We’ll wrap up today with an interesting development on the non-fungible token (NFT) front.

NFT Finance (NFT-fi) is rising in popularity. This is NFT-based lending on the blockchain.

We have talked quite a bit about NFTs in recent months. At their base level, NFTs are digital collectibles. Many are simply digital art. But NFTs can also convey special attributes to holders.

And this is just the tip of the iceberg. There is an immense range of applications for NFTs across many industries.

So there are many reasons why people may want to buy an NFT and hold it for long periods of time. The downside is that they are effectively locking away their capital until they sell.

And that’s where NFT-fi comes in.

The idea behind NFT-fi is that NFT holders can borrow money using their NFT portfolio as collateral. That way they can continue to hold their favorite NFTs, but they can also tap into some of the value for other purposes.

This kind of lending service is especially valuable when the NFTs have gone up in value. If investors sold, they would be on the hook for capital gains taxes on their gains. And, of course, they would lose future upside.

But if they borrow against their NFTs instead, investors avoid capital gains taxes. And they keep the future upside. It’s a great win-win deal.

That’s why NFT-fi is rising in popularity. To date, over $150 million in NFT-based loans have originated so far this year. That’s up from just $14 million for all of last year. Incredible.

And I’m most excited about what comes next…

If we think about it, it’s possible to create an NFT to represent virtually any asset in the world. Converting physical assets into NFTs is “tokenization.”

With that in mind, think about all the illiquid assets out there.

All of these assets could be tokenized and turned into NFTs. Doing so would register these assets, and thus their value on-chain.

This would dramatically simplify the process of lending, as the NFTs – thus the underlying assets – could be wrapped into a smart contract tied to the loan. If the borrower doesn’t pay back the loan, then the smart contract can liquidate an appropriate amount of an asset to pay back what was due.

This would make it simple for individuals and even corporations to borrow against their on-chain assets and avoid having to pay capital gains taxes. This is something that the ultra-wealthy have done with high-end assets through the banking system for decades… Centuries even. But it hasn’t been available to normal investors. Until now.

NFT-fi, tied with tokenization of assets, will unlock illiquid markets, and it will allow normal investors to access liquidity for the very first time in history. That alone will power a major economic boom as billions of dollars in “dead capital” is finally liberated.

That’s why I’ve been so excited to help my readers profit from this tokenization trend. (Learn more about how right here.)

What we are looking at here is the future of lending. We have a lot to look forward to.