Given the geopolitical crisis unfolding right now, on Friday we took a look at the market action in the months that followed the start of the last five major wars. If anyone missed these useful charts, please go right here to get up to speed.

Standing in stark contrast to the darkness surrounding conflicts like these, the stock markets in each crisis dropped in anticipation of the wars, and they roared higher after they began. The consistency is remarkable.

Today, let’s take one more step back objectively. We’ll look all the way back to 1939 and World War II. It’s useful to understand the market direction over the last 80-plus years and how things traded following these terrible outbreaks of conflict. 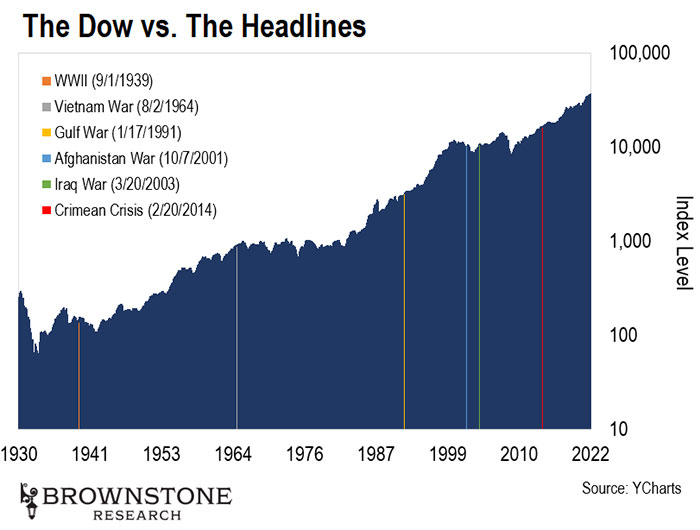 With the exception of the late ‘60s and early ‘70s, which were largely flat, the market has consistently marched higher in the years that followed various conflicts. I expect that this time will be no different at all.

In fact, I have even greater confidence in my prediction that the Federal Reserve will do very little in terms of raising the Fed Funds rate (only 25 basis points this year, and no more than 50).

The current crisis has naturally caused crude oil to spike, which will result in even higher prices for gasoline.

The crisis is giving the current administration cover to not only not raise interest rates, but probably continue to provide stimulus through additional asset purchases. With gasoline prices going even higher, it can’t afford to start aggressively raising rates.

It’s also a convenient tool to avoid having to talk about failed pandemic policy and change the narrative to something else. It’s fascinating to see the media manipulation and re-positioning happening in real time.

And irrespective of whether we agree or disagree with the current foreign policy, these events are positive for the stock market this year. Furthermore, the closer we get to the mid-term elections, the more we’ll see in terms of stimulus.

The confluence of AI and nuclear fusion…

We just talked about a major milestone on the nuclear fusion front last week. That was when the Joint European Torus (JET) lab set a record for energy produced with a nuclear fusion reaction.

Well, today we have yet another breakthrough. Notice how the developments are happening closer and closer together now…

And today, the story isn’t about the nuclear fusion reactor itself. It’s about artificial intelligence (AI). This is one more sign of the convergence giving us so many unique investment opportunities…

DeepMind, the AI division of Google, just demonstrated how we can use neural networks to control the fusion plasma within a fusion reactor. This is a big step toward sustaining nuclear fusion reactions perpetually.

For the sake of brand new readers, nuclear fusion is essentially the power of the Sun. It involves taking two separate nuclei and combining them to form a new nucleus. This creates a plasma that produces an enormous amount of clean energy.

And unlike nuclear fission, forms of nuclear fusion produce no radioactive waste.

However, the hardest part of making nuclear fusion work is controlling the plasma. That’s because the plasma is typically more than 100 million °C. It would melt the wall of the reactor instantly if it ever touched it.

But as the plasma moves, the magnets must adjust immediately in response to control the shape of the plasma. That’s the challenge.

And that’s where AI comes in.

DeepMind set up two neural networks in something of a tiered structure. The first is like the professor. Its job is to oversee the plasma reaction and constantly learn how to control it better.

The second neural network is the operator. It takes in 90 different measurements of the shape and position of the plasma in real time. And it adjusts the magnets accordingly. This happens many times a second. No human could do this.

Meanwhile, the first neural network is learning from the entire process. And it will teach the second how to do a better job next time.

So in time, we will get to the point where neural networks can manage nuclear plasma reactions 24 hours a day. This is a major piece of the puzzle… In fact, we won’t have sustainable fusion reactions without neural networks.

And no doubt this will send ripples throughout the industry. I expect we’ll see other nuclear reactor projects adopt DeepMind’s approach to managing these reactions.

The bottom line is that nuclear fusion technology is coming much faster than the experts think. We’re just a few years away, and I absolutely expect to see live nuclear fusion reactors up and running in commercial operation before the end of the decade.

And my prediction is that we’ll see the first net energy surplus reaction within the next 36 months in a prototype fusion reactor.

Your spacecraft will be boarding soon…

2021 was a record year for aerospace. Last year, there were 133 successful orbital rocket launches. This was the most since 1976.

And last year is when commercial space travel became a reality. Virgin Galactic was the first company to send paying customers on a spaceflight.

I’m sure we remember the images. Virgin Galactic’s Unity 22 took off from Spaceport America in New Mexico.

The company had attached it to the belly of its mothership Eve. The spacecraft detached and ascended to 282,000 feet. The passengers experienced zero-g for roughly two minutes. Virgin Galactic founder Richard Branson was among them.

The flight was historic. But it wasn’t without its bumps…

Virgin Galactic ran into regulatory issues after launch. It turns out that the spacecraft altered from its flight path. And the Federal Aviation Administration (FAA) grounded the company’s space operations.

That’s the bad news. But Virgin Galactic has adjusted. And the company is ready for the next step.

Virgin Galactic announced that it’s ready for commercial space flights later this year. It has made improvements in its spacecraft and software systems and is preparing for full operations.

Recently, 1,000 reservations opened for new flights. And the price tag for a seat is shocking. Originally, it cost only $250,000 to experience a flight.

But get this… A ticket now costs $450,000. It looks like inflation has even caught up to commercial space flight.

Passengers must put down a $150,000 deposit. And $25,000 of that is non-refundable. The company evidently is trying to catch up on lost revenue this year due to its delays.

That’s a lot of money to pay for a trip to space. But the price tag isn’t slowing down reservations. As I write, it has already filled over 750 spots.

Plenty of people are itching to go to space. I’m one of them, but not at this price. And I’d feel a lot more comfortable after Virgin Galactic has a bunch more successful flights under its belt to ensure that it has taken care of its technical problems.

This revenue will fuel Virgin Galactic’s growth. The company is building two more spacecraft. That will bring its total to three.

And later this year, everyday people will be going to space on Virgin Galactic’s “spaceliner.” Much longer term, traveling to space will be as commonplace as flying on a commercial aircraft.

Virgin Galactic, SpaceX, and Blue Origin have all completed civilian missions… all within a 12-month window. It has been a pretty incredible time in the industry.

And while these first few years of commercial space flight will be expensive and out of reach for most of us, it won’t take long before the price per seat drops down to far more reasonable levels.

Get ready for self-driving trucks on the highway…

We’ll wrap up today with another exciting development from the world of autonomous driving.

These are two of the largest semi-truck transportation companies in the United States. Anyone who has spent much time driving on the interstate has probably seen these names before.

And soon those trucks will drive themselves. That’s what this partnership is all about.

I know this may be scary to some readers. After all, none of us likes to drive on roads with heavy truck traffic as it is. If those trucks now drive themselves, what if something goes wrong?

Well, Waymo and its trucking partners have very quietly been testing the technology. In fact, Waymo-powered trucks have already delivered almost one million pounds of freight using this autonomous driving technology. If there were any kinks, the company has worked them out by now.

And I would expect self-driving trucks to be much safer anyway. Drivers get tired and drowsy. Self-driving technology does not.

So, we shouldn’t be too surprised if we start to see trucks with no drivers in them on the highway. Companies are adopting this technology fast thanks to ongoing labor shortages.

The reality is that there simply aren’t enough truck drivers to handle all the freight that needs moving right now. This is why goods are still piling up at American ports.

Interestingly, Waymo’s approach to self-driving trucks is starkly different from its approach with cars.

As we have discussed before, Waymo enlisted Chrysler to make a fleet of custom Pacifica minivans. These became the first cars in Waymo’s fleet.

Here’s a clip of my ride in one of Waymo’s self-driving Pacificas:

Unlike these custom-designed Chryslers, Waymo isn’t trying to create custom trucks. Instead, it’s retrofitting existing semis with both the hardware and software needed to enable autonomous driving.

Waymo’s end goal is to partner with logistics brokers to offer autonomous services to the industry. This is very much a Google-like strategy. It’s all about the data.

That’s why partnering with big names like J.B. Hunt and C.H. Robinson was so important. These are two of the biggest freight carriers in the U.S.

As such, they have a tremendous amount of data on all of the country’s major highways, distribution centers, and logistics facilities. And as we know, Google is the king of finding ways to monetize data.

So, we’ll keep a close eye on Waymo this year. I expect we’ll see more strategic moves in the months ahead.

And as I mentioned, this self-driving trend is only part of the larger automation trend taking place all around us. That’s creating some intriguing investment possibilities. To learn more about my top recommendations, simply go right here.