The dynamics between Microsoft and OpenAI seem to get more interesting with each week that passes. Unsurprisingly, the terms of their partnership are gaining a lot of attention given that generative artificial intelligence (AI) is the hottest thing happening in the industry right now.

And it appears that there’s a lot more going on than just a simple $1 billion investment made by Microsoft into OpenAI back in 2019.

It turns out that Microsoft has funneled as much as $3 billion into OpenAI over the last few years, a sum far greater than what was previously disclosed.

I’m not surprised that Microsoft chose to keep its deals so close to the chest. It’s an insider at OpenAI by the very nature of its investment, and it’s well-known how valuable OpenAI’s technology could be for its business.

Last week, we learned how significant the application of OpenAI’s technology into Microsoft’s products has become. I would argue that infusing OpenAI’s generative AI into the wide range of Office products is the most strategic thing that Microsoft has done in at least a decade.

This was clearly part of the plan, which I’m certain Microsoft didn’t want its competitors to know about… mainly Alphabet (Google), which has clearly been caught flat-footed on these latest developments.

And just days ago, documents were revealed that paint a very interesting deal structure between Microsoft and Open AI. In fact, the terms are very unusual – and something I’ve not seen before.

The earliest investors in OpenAI will receive all of OpenAI’s profits until the entirety of their original investment is paid back in full. This is unusual, as early investors typically have to wait until an IPO or an acquisition before they can receive their profits (capital gains) on their investment.

After those investors are paid back, Microsoft will receive 75% of all OpenAI profits until its investment principal has been paid back in full.

Then, after that, 49% of future profits flow back to Microsoft in a way that basically buys back Microsoft’s 49% “ownership” in OpenAI. Once that’s happened, Microsoft could earn as much as $92 billion from the investment.

In the event that happens, it would become one of the most successful investments in history. And presuming that day comes, OpenAI – the non-profit side of the business – ends up taking over the for-profit side of OpenAI for good.

Like I said, this is a very unusual deal structure. But it gives Microsoft an incredible competitive advantage for both its Enterprise, Consumer, and Cloud Services businesses.

And while critics are suggesting that it will be a very long time before Microsoft gets its principal and capital gains out of OpenAI, I believe many will be surprised.

The competitive advantage alone reduces the short-term need for any kind of investment return, but I believe that the usage of generative AI is going to spread like wildfire this year.

The release of an Apple iOS application is in testing and forthcoming, and it will be simple for OpenAI to put in place a subscription model that will generate billions in a matter of two or three years.

And none of this takes into account the rumored additional $10 billion investment by Microsoft into OpenAI that’s reportedly under consideration. Either way, this is a transformational deal for Microsoft, and one in which Microsoft will win no matter the outcome.

And that’s the sign of a very good deal.

An imminent launch of a new entrant in aerospace…

Yesterday, we had a look at the incredible year SpaceX had in 2022… and how the company has absolutely ignited the aerospace industry.

The progress SpaceX has made is nothing short of remarkable. But SpaceX is by no means the only game in town…

Another innovative new space company called Relativity Space is making tremendous strides of its own. Regular readers may remember that this is the company that 3D prints about 85% of its rockets.

Here’s a look at that process:

Here, we can see the 3D printer in action. It’s got a disk on the bottom that spins around while the 3D printer sinters the metal material to print the rocket’s nose cone.

Relativity Space is gearing up to launch its Terran 1 rocket later this month. That will be a huge milestone for the company. And it will show the world that 3D-printed rockets can, in fact, withstand all the heat and pressure of a major rocket launch.

And make no mistake about it – this could be a game-changer in the industry.

As we would expect, 3D-printed rockets are considerably cheaper to make than those produced by standard manufacturing processes. But that’s not their only advantage.

3D-printed rockets contain about one-tenth as many parts as standard rockets. That makes them simpler. And in theory, simple rockets should have a higher success rate. There’s just less that can go wrong at launch. That’s why this is such an interesting approach.

The Terran 1 can lift about 1,250 kilogram (kg) payloads into low-Earth orbit. This is a relatively small payload, but still capable of sending significant payloads into orbit.

I look at the Terran 1 as a proof-of-concept rocket – a precursor to much larger things to come. Once proven, Relativity Space plans to develop the Terran R, which will have more than 20,000 kg capacity into low-Earth orbit.

Given that payload, it will also have the ability to take passengers and cargo to the Moon and Mars. In that way, Relativity Space could become a legitimate competitor to SpaceX.

It’s a Silicon Valley kind of innovation that’s thriving and pushing the way forward, leaving these incumbents stuck back on Earth burdened by their bureaucracy.

And it’s going to be a blast watching this new era of space exploration play out before our eyes this decade.

We’ve looked at a variety of haptics technology in past issues of The Bleeding Edge.

For the sake of new readers, this tech enables us to control computer software without actually touching a keyboard or a mouse. It makes our interaction with a computer feel seamless and has great applications in gaming, productivity, and even medicine.

Up to this point, we’ve seen haptics come in the form of arm braces, gloves, and headsets. And to be sure – those are impressive iterations of the technology. But they’re a bit bulky and invasive.

The new research outlines a haptics device that can be sprayed (or printed) onto the skin. It’s loaded with a nano mesh of sensors that run from the forearm down to the fingers. And the device connects to computing systems via a small wireless node. 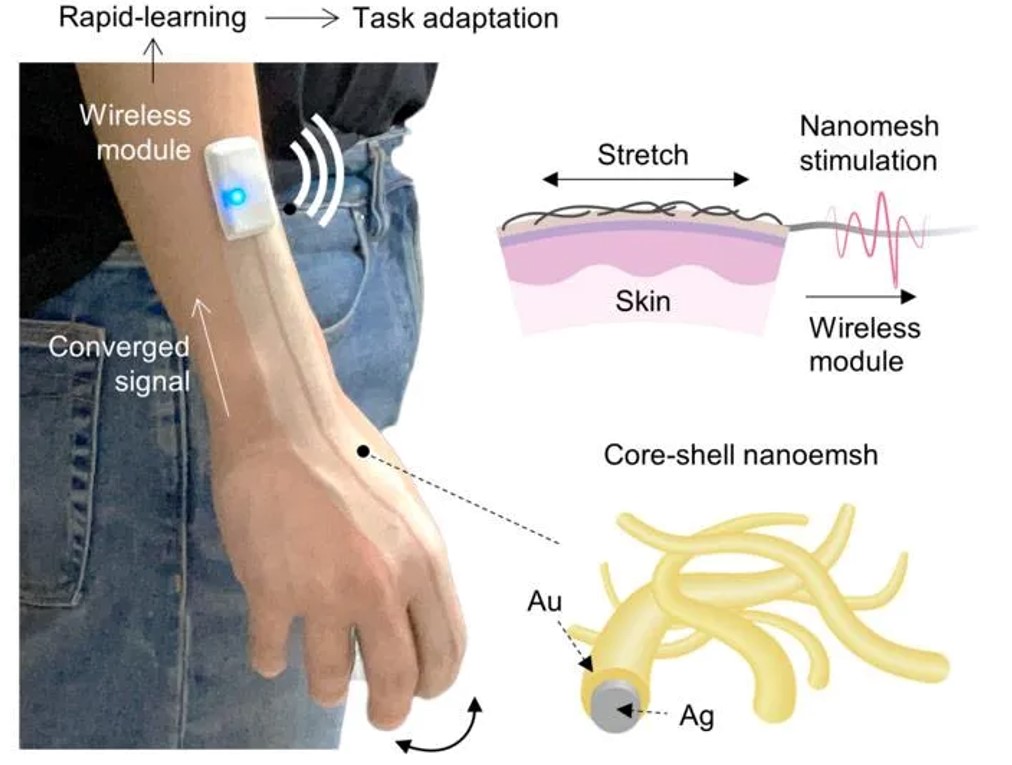 Here, we can see that the spray-on device looks almost like a new layer of skin. Its application attaches flush with the contours of our skin, and it can stretch and bend as the user moves.

The mesh itself is made up of millions of nanowires coated with silver and gold. Coupled with the wireless controller, this mesh can measure electrical resistance traveling from the brain down to the wrist and the fingers.

It can then send signals to a computing system to indicate certain signals to control software. It also allows users to type on a virtual keyboard using just their finger gestures. So really, this is a blend of haptics and brain-computer interface (BCI) technology.

What I like about this is that it’s the least-bulky form of haptics technology we’ve seen yet. And it lasts for several days at a time. Even if the user washes their hands normally, the spray-on device won’t wear off.

So this is something people can wear for a few days at a time and hardly notice it. When it comes to wearables, that kind of convenience is the key to mass adoption.

Without the need for any bulky devices, or tech-laden gloves, wearing haptics wouldn’t provide an inconvenience at all. Most wouldn’t even feel the haptics presence on their skin, yet they would be able to interface with computing systems almost as if it was like magic.

That makes this an incredibly interesting development in the haptics field. I’m very interested to see if anyone forms a company to commercialize this technology.

AI is set to revolutionize the mental health field…

We’ll wrap up today with an interesting application of AI.

To set the stage, Koko connects people who need mental health support with volunteers who are willing to listen and provide sound counsel. The problem is that there’s often a shortage of volunteers.

Plus, human volunteers aren’t available 24/7. And when they get tired, or they’re dealing with their own problems, it often impacts their service.

To solve this problem, Koko created its own AI-powered chatbot. It’s based on OpenAI’s GPT-3. This is the incredible generative AI that can respond intelligently to human input and questions in real time.

Then Koko allowed its AI to provide virtual mental health support for about 4,000 people. This consisted of virtual chats. People using Koko shared their struggles with the AI. And in turn, it provided support and what could only be described as empathy.

What’s more, the AI improved response times by 50%. It was able to provide almost immediate support to those seeking help.

But here’s the thing: Koko didn’t tell users they were talking to an AI. They all thought they were speaking to another person.

This created a big fuss. Many have threatened lawsuits against Koko claiming they didn’t provide informed consent to users concerning the use of the AI.

But the pushback only came after people found out Koko was using an AI. And the complaints came despite the fact that the AI provided better service than human volunteers.

So this is quite an interesting case.

We’ve come to the point where it’s hard to know whether we’re speaking to a human or an AI when we engage in virtual communications. That’s understandably disconcerting to a lot of people.

But at the same time, Koko demonstrated that AI can provide incredibly useful services for people in need. And it can do so faster and better than humans can.

When the dust settles, I think we’ll see AI-based chatbots like this used more and more throughout the mental health industry. It’s a fantastic application of AI.

It’s just going to take us some time to get used to the idea.