Last Thursday, we crawled down the rabbit hole on the extraordinary GameStop (GME) situation. I told you all about the efforts to ban or censor the merry band of retail investors who recognized a major market distortion and traded in hopes of a profit.

At least, that’s what they tried to do. But these events have become even more interesting and bizarre than they were a few days ago…

The distortion was the massive levels of naked short selling of GameStop’s stock by hedge funds. This was all done to drive down the share price and make a profit.

Naked short selling is not supposed to be possible. Still, it happens all the time. It happens when the total short position is larger than the total number of shares available to short. And that’s exactly what happened with GameStop.

A large number of retail investors identified this massive short position and drove up the shares in GameStop to levels that almost brought down the hedge fund Melvin Capital. Two other prominent hedge funds, Citadel and Point72, had to bail it out.

And brokerage houses were overwhelmed by all the buying and selling activity on GameStop. One in particular was caught way off guard: Robinhood.

What happened next is hard to believe.

Robinhood was lending out shares of GameStop and other highly shorted companies to hedge funds. Robinhood generated lending fees by doing so. It also allowed – arguably encouraged – the retail users of its platform to trade stocks and options on margin.

But there was so much activity around GameStop that Robinhood could no longer meet its capital requirements from a regulatory perspective. It had to quickly raise additional private capital to shore up its balance sheet and provide enough capital to clearinghouses to avoid getting into trouble… or something much worse.

More specifically, it drew down on credit lines of $500–600 million and raised more than $1 billion in emergency funding. The most ironic part was that it did so hours after stating that it had no liquidity problem.

But in order to stop its increasingly large capital requirements from growing even larger, Robinhood suspended trading on several shorted stocks like GameStop.

And it didn’t just suspend trading. Robinhood actually started selling its users’ positions at its own discretion. Many traders using Robinhood reported having their shares sold without their permission.

That’s not a typo. Users profiting from GameStop were closed out of their positions – without their consent – at rapidly declining prices in GameStop. This was done so Robinhood could shore up its own business.

And it resulted in the loss of more than $1 billion in profits for retail investors. Of course, it saved hedge funds an equivalent amount of bleeding.

Robinhood is certainly an inappropriate name for the online brokerage. I propose renaming the company “Robbing the Neighborhood.”

Robinhood was supposed to let regular investors do “commission-free trading.”

But the company did exactly the opposite. The platform is not commission-free. And apparently the company can trade our stocks in a way that benefits Robinhood and its customers… and hurts its users.

I use that language intentionally. Robinhood’s “users” use the brokerage to trade and invest. Robinhood’s “customers” are actually the hedge funds that pay Robinhood for order flow.

Robinhood’s largest customer is Citadel. More than half of the orders that Robinhood users place are routed through it.

The absurdity of this situation is baffling.

Robinhood is the online broker equivalent of what Facebook is to social media.

Robinhood takes users’ data – their order flow – and sells it to the highest bidders.

And politicians are now looking at retail investors to determine if they are manipulating the markets. I predict that this will end in new regulatory changes to “protect” us retail investors from any speculative behavior.

And, of course, the hedge funds are crying foul due to the sting of losing billions. But the real focus should be on the hedge fund activity and naked short selling.

I doubt that will happen. After all, the new U.S. Treasury Secretary, Janet Yellen, received $810,000 of speaking fees from none other than Citadel over the last couple of years.

I suspect that the old saying will ring true…

“Don’t bite the hand that feeds you.”

In an interesting move, Microsoft just invested $2 billion into Cruise at a $30 billion valuation.

To bring newer readers up to speed, Cruise is the self-driving division of General Motors (GM). GM acquired Cruise for $581 million back in 2016. At the time, Cruise was valued at around $1 billion.

But GM didn’t retain 100% ownership of the early stage company. Instead, GM allowed several other companies – including Honda and SoftBank – to invest in Cruise.

As we have discussed, this was a smart move. I suspect Cruise would have been strangled had GM retained 100% control. Outside investment gave it a certain level of autonomy.

And that brings us back to Microsoft. By investing at a $30 billion valuation, Microsoft is getting in at a valuation that is 30 times higher than where GM acquired Cruise four and a half years ago. Why would it do this?

On the surface, Microsoft is simply buying business.

Per the partnership agreement, Cruise will begin using Microsoft’s Azure as its “preferred” cloud services provider. That means Cruise is going to turn around and give some of this investment right back to Microsoft to pay for cloud services. I’m not sure that I would call that winning new business. I think of that as just buying business and giving away free services.

This is just like the deal Microsoft did with OpenAI back in July 2019. And it shows us how desperate Microsoft is to catch up with Google Cloud and Amazon Web Services with its cloud business.

And I can’t help but think that there may be a bigger story forming here.

Microsoft has been sitting on its hands watching both Google and Apple make big strides in the autonomous driving space. Google’s self-driving division Waymo went live with its autonomous ride-hailing service in Phoenix. And Apple has been advancing Project Titan, its secretive self-driving initiative.

Meanwhile, Microsoft has absolutely no presence in the auto industry.

Yet Microsoft’s Windows operating system has a near monopoly in the personal computer industry. It would make perfect sense for Microsoft to attempt to develop an operating system for the automotive industry as well.

Perhaps this is the first step in that direction. We’ll have to watch this closely.

Regardless of what Microsoft does, autonomous driving technology will be one of the biggest stories of the year. We’re in for an exciting ride

Get ready for autonomous drones…

Autonomous technology isn’t just for ground-based transportation. It tends to be the focus, but there is a lot more going on in the world of autonomous vehicles.

The Federal Aviation Administration (FAA) just gave an early stage company called American Robotics permission to fly autonomous drones in the U.S. And the FAA made it clear that these drones can fly without any human piloting or even observing.

This is a first.

About this time last year, we talked about how Amazon, Google, and UPS had received permission from the FAA to begin drone deliveries. But those drones require a human touch. The FAA required somebody to monitor them at all times. That won’t be the case for American Robotics.

So this is a big-time development. And it shows us how far the technology has advanced. After all, if the FAA didn’t feel that the technology was safe enough, it wouldn’t have given permission to American Robotics.

American Robotics was spun out of Carnegie Mellon’s robotics lab in Pittsburgh. This is one of the top centers for robotics tech in the world.

In fact, years ago Uber actually decimated the Carnegie Mellon robotics laboratory by basically “buying out” a large chunk of the engineers and scientists to create its autonomous division. This is the same division that Uber just recently had to spin out, which we talked about last week.

American Robotics’ drones will be used for research and development, crew training, and market surveys. And this is just the beginning.

It is easy to envision autonomous drones ultimately getting the green light to conduct deliveries as well. And one day, we’ll even have large autonomous drones capable of carrying passengers at our disposal much in the way that Uber or Lyft operate today.

So this is another great example of why autonomous technology is one of the biggest stories of 2021. There is so much investment flowing into this space. And I predict we’re going to see an explosion of products and services coming out.

Google’s wacky Loon project is finally getting the ax…

This crazy project involved launching base stations equipped with solar panels into the stratosphere on special balloons. Powered by the Sun, these base stations floated through normal wind patterns, providing internet connectivity to devices on the ground below. 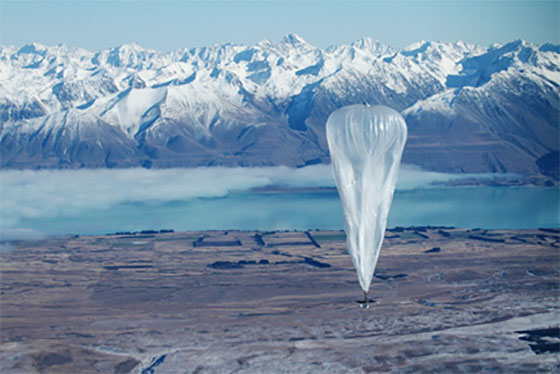 Many of us in the industry pointed out that this project didn’t make any sense. It is far too difficult to manage a network of balloons floating around in the air. You just can’t provide continuous coverage that way.

There must be fixed base stations on the ground for stable internet service. It’s not that the technology didn’t work. It did. But operationally, it was extremely complex to manage.

Of course, Google positioned the Loon project as altruistic. The company claimed that it simply wanted to provide people living in rural parts of developing countries with internet service. That’s why it was willing to go through all the trouble and expense.

However, Google’s motivations were entirely self-serving. The company wanted to get the people living in the targeted areas on the internet so it could conduct behavioral surveillance on them and generate more advertising revenues.

And Google finally admitted this… though, indirectly.

Google announced that it is shutting down Project Loon because it couldn’t figure out how to make it a long-term sustainable business. I guess Google found out that it would never generate enough advertising revenue by collecting data on unassuming consumers living in remote parts of the world.

So much for altruism. It was all about the money after all.

Starlink now has over 950 satellites in low-Earth orbit, each connected to fixed base stations on the ground. This provides consistent satellite internet 24 hours a day.

No need for a bunch of balloons floating around in the sky.

P.S. Don’t forget I’m hosting a special event on February 10 at 8 p.m. ET. We are calling it Investment Accelerator.

That evening we will discuss the biggest dangers I see in the market today, and why we need to avoid some of the most popular stocks that retail investors have been flocking to.

We will also talk about how normal investors can “piggyback” on some of the hottest deals from the world’s savviest investors.

What’s more, I am going to reveal what may be my most ambitious project yet. We are going to talk about an investment opportunity so big that it could put savvy investors on the path to sharing in $1 billion of tech profits.

So please mark your calendar for February 10 for our Investment Accelerator event. We’ll get started at 8 p.m. ET sharp.