The 10-2 spread is a popular financial metric that’s been getting a lot of attention these days. It’s usually what people talk about when they refer to the U.S. Treasury yield curve.

The reason the metric’s closely followed is because every recession we’ve seen in the U.S. has been preceded by an inverted yield curve between the two-year and 10-year U.S. Treasury yields.

But it’s not perfect. The metric has inverted at times when there was no recession at all.

Yesterday, after news that the Fed Funds Rate would increase by another 75 basis points, Fed Chairman Jerome Powell said that: “No one knows if there’s going to be a recession or not.”

But we shouldn’t believe him…

Even though the 10-2 spread gets all the attention, there’s another metric with proven accuracy in predicting recessions going back to 1973.

Instead of using the two-year Treasury against the 10-year, using the three-month U.S. Treasury has proven to be 100% accurate: 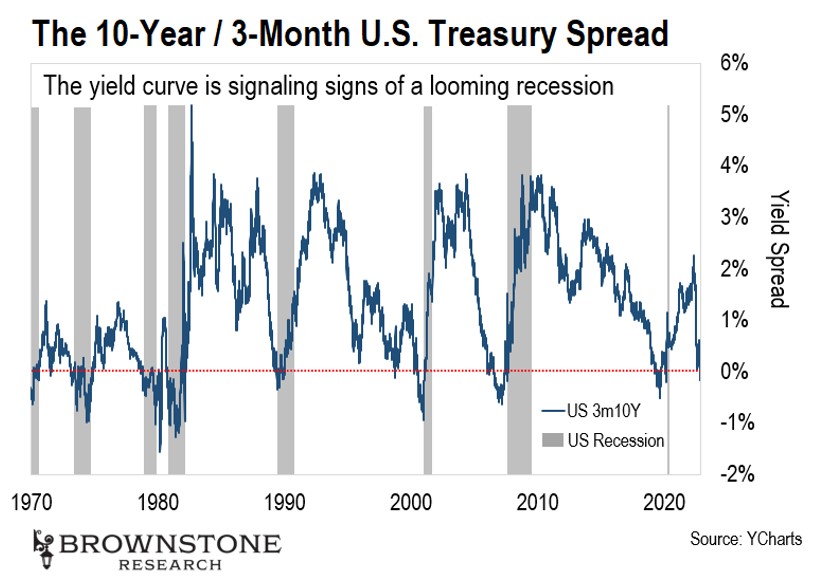 Here we can see past U.S. recessions (the areas shaded in gray) directly coincided with the 10-3 Treasury spread becoming inverted.

And while the curve isn’t inverted today, it’s been inverted for roughly the last month. That means we know what’s happening now… or what’s coming right around the corner.

Again, not good. Aggressive rate hikes into a recession are never a great idea.

There will still be market rallies along the way, but we’re in for a bumpy ride these next six months. The goal of the U.S. government and Federal Reserve clearly isn’t a soft landing. And it’s definitely not to protect the value of our 401(k)s or retirement accounts.

We can clearly see what “they” are up to now:

Once the easing starts, institutional capital will flood back into the markets and the recovery will be quick. This is why I expect that our “official” recession – whatever that will be defined as – will be a short one.

My money is on the 10-3 Treasury spread. It doesn’t matter what spin we hear from the talking heads. The data tells us what’s really going on.

From an AI to human clinical trials in just 4 years…

As regular readers know, the “Convergence” is one of the top trends we’re tracking at Brownstone Research. This refers to the application of artificial intelligence (AI) and machine learning (ML) with life sciences and biotechnology.

It’s resulting in novel therapeutic developments with higher likelihoods of success, all at a fraction of the time of historical drug development.

And one of the most exciting players on this front is Verge Genomics, which just advanced a therapy into a Phase 1 human clinical trial that was entirely discovered and developed by AI.

Verge isn’t the first company to get an AI-based therapy into the clinic. Both Exscientia and Insilico Medicine – companies we’ve been tracking in The Bleeding Edge – have recently done the same.

But Verge is taking a materially different approach. It skipped animal testing completely and jumped right into human clinical trials. Normally, this doesn’t happen. But there’s a very good reason why Verge has been able to do this.

Then Verge fed the data into its AI.

From there, Verge’s AI was able to learn from more than 11 million different data points. Eventually, it found a new causative mechanism for ALS. It determined that the loss of what’s called endolysosomal function in specific cells led to the disease.

So, the AI developed a highly targeted therapy designed to treat this specific causative mechanism. And because Verge developed its therapy directly from human brain tissue, the company made the case that there was no reason to take a step back and perform animal testing.

This makes perfect sense – and the regulators agreed.

The industry is well aware that data taken from animal models are historically poor at predicting efficacy for neurodegenerative therapies. There’s just too much of a difference between animal brains and human brains.

That’s why Verge jumped straight into human clinical trials. And that is absolutely a first.

I’m very excited to track this company’s progress from here. Verge should report initial clinical data at some point next year. I can’t wait for that.

And a breakthrough in a neurogenerative disease like ALS would have positive implications for other related diseases. Verge already has Parkinson’s, supranuclear palsy, schizophrenia, and other dementias in its sights.

And here’s the thing: Verge is still a private company.

If the initial data comes back strong, I suspect Verge will leverage that strength into an initial public offering (IPO). That would be a milestone for the company. And it could make Verge a fantastic investment target when it enters this “magic window” …

A unique and powerful approach to autonomous driving …

We talked on Monday about how Argo AI was completely shutting down its operations. This company had been an early frontrunner in the autonomous driving industry… so this came as quite a surprise.

However, we noted that this kind of thing is normal. With any emerging technology, we’ll see winners emerge and weaker players fall off.

Well, a lesser-known autonomous driving start-up is now making moves at the same time Argo AI is shutting down. It’s a great example of how weaker technological approaches are culled from the industry and those with promise fill their void.

The up-and-comer to watch here is Wayve. Wayve just announced the second generation of its self-driving technology. And it’s quite ambitious.

We’ve talked before about how both Waymo and Cruise launch their autonomous vehicles within a geofenced area. They both extensively map out a predetermined area – every intersection, every street corner, every turn. Then they feed that data to their AI.

As a result, Waymo and Cruise cars know everything there is to know about the streets and conditions within their geofenced area… before they even get on the road.

This is quite an effective approach. It works great. But the problem is that it doesn’t scale very well. To launch in a new city, Waymo and Cruise have to send drivers out to map all the streets in great detail to train the AI.

Wayve is doing the opposite. It’s developing self-driving technology for generalized use. The idea is that, when it’s ready, Wayve can drop a self-driving car in any city on any street and it will be good to go. No site-specific training necessary.

Obviously, this approach is far more scalable. And much cheaper to deploy. No extensive mapping necessary.

Of course, this is also the model Tesla uses. But Tesla has a distinct advantage.

Because it also produces its own cars, Tesla collects driving data from every single car it sells. This gives the company a massive database to train its AI with.

Tesla doesn’t have to rely on simulations. It has a vast dataset of real-world driving conditions that grows every single day.

Wayve doesn’t have that luxury. Instead, the company builds simulations used to train its AI. Here’s what that looks like:

Here we can see the self-driving AI learning from a simulation. Wayve can create an unlimited number of these to cover any conceivable condition or circumstance.

So the idea here is that Wayve’s AI will continue to improve with every simulation it goes through. That’s very similar to Tesla’s model. The key is in the quality of the simulations.

That makes this a company we need to track closely going forward.

If we remember, when Argo AI shut down, Ford announced that it would look to license self-driving technology at some point in the future. Well, a company like Wayve would be a very strong candidate for Ford to license from.

So let’s keep a close eye on this one. Wayve is suddenly a unique player in the autonomous driving industry that, if successful, will become one of the most valuable tech companies in the industry.

Moonwalkers: the next consumer craze…?

We’ll wrap up today with a fun topic: Moonwalkers.

As we can see, Moonwalkers look like roller skates. But they’re much different.

These strap-ons have small electric motors that power the eight wheels. They can reach speeds of about 6.5 miles per hour. And the wheels aren’t free-spinning like roller skates. They only rotate when the wearer starts to walk.

That’s because there’s some light AI embedded in the Moonwalkers. It monitors the gait of the walker. Then it speeds up or slows down the motors as necessary.

Talk about a novel application of AI.

And as a bonus, the Moonwalkers can slip over any shoe. We can simply strap these on to our favorite pair of sneakers, or even dress shoes.

Also interesting is how Shift Robotics is going about the Moonwalkers launch.

This is a company that spun out of the Carnegie Mellon Robotics lab. This is one of the most famous robotics institutions in the world.

So we would think Shift Robotics would have its pick of venture capital (VC) funding. But it didn’t go that route.

Instead, Shift Robotics raised money for the Moonwalkers launch by doing a Kickstarter crowdfunding campaign. This basically enabled consumers to pre-order Moonwalkers at a discount to the retail price.

What’s interesting is that Shift didn’t need to give up any equity in the company. The campaign was for pre-orders of its first generation product.

And all it looked for was $90,000. That would be enough to manufacture the first batch of Moonwalkers.

Well, the company received nearly $235,000 from its Kickstarter campaign, making it a fantastic success.

To me, this is a smart way for companies with a consumer product to get some initial funding to manufacture a product. Why give up equity at such an early stage if you can get your first-generation product into the market using a crowdfunding pre-sale campaign?

I’m curious to see if these kind of micro-mobility products will receive broader uptake compared to something like the Li-ion scooters, which have been popular amongst micro-mobility companies.