With all of the chaos caused in the world of cryptocurrencies from the outright fraud perpetrated by Sam Bankman-Fried (also known as SBF) and his team – which resulted in the implosion of cryptocurrency exchange FTX – it’s natural for us to wonder: What’s next?

Many venture capital (VC) funds that invested in FTX – like Sequoia, SoftBank’s Vision Fund, and others – have already written down their investments to zero.

We now know that SBF stole at least $10 billion of client funds, moved it to his personal crypto hedge fund Alameda Research, and then “lost” the money. As a result, Alameda Research has imploded as well.

The reality is, we don’t yet know all of the counterparties. But the situation is already far worse than what was believed last week. And the more we learn, the worse it gets.

Not only is Tether the largest U.S. dollar stablecoin, but it’s also now the third largest cryptocurrency in the world by market cap. That makes it critically important to the industry.

Stablecoins, by definition, are supposed to be stable. They accomplish this “peg” to their underlying currency by backing each stablecoin 1:1 with a U.S. dollar-denominated asset.

The reality is that stablecoin projects can hold not only U.S. dollars in cash accounts, but other U.S. dollar-denominated instruments like U.S. Treasurys, or U.S. dollar money market funds.

As an example, here’s the balance sheet of Tether competitor Circle and its U.S. dollar stablecoin, the USDC: 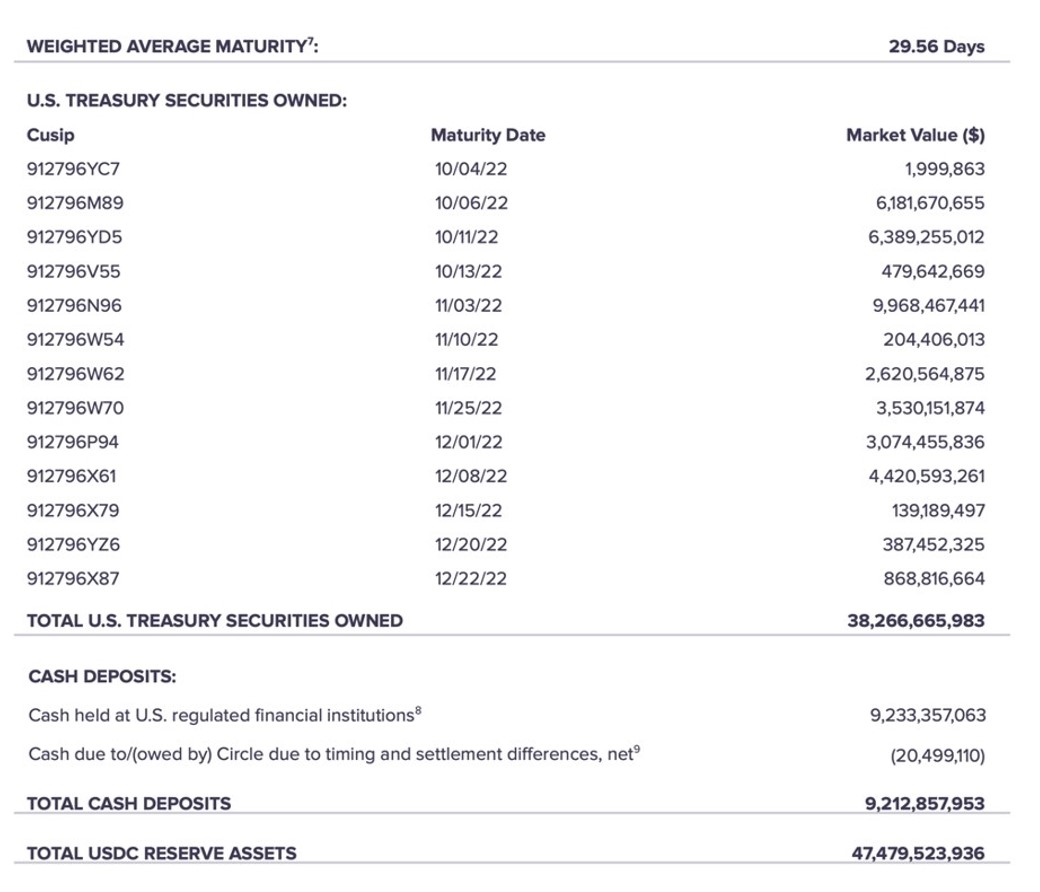 Circle keeps it simple. It holds a range of short-duration U.S. Treasurys that make up the bulk of its reserves, and about 20% of its reserves are in cash.

At the time of the audit on September 30 of this year, Circle had issued 47,261,819,834 USDC. Therefore, it had slightly more in reserve than stablecoins issued at the time. Completely safe; entirely backed by U.S. dollar assets; no risk of failure.

Now, let’s have a look at Tether’s September 30 audit: 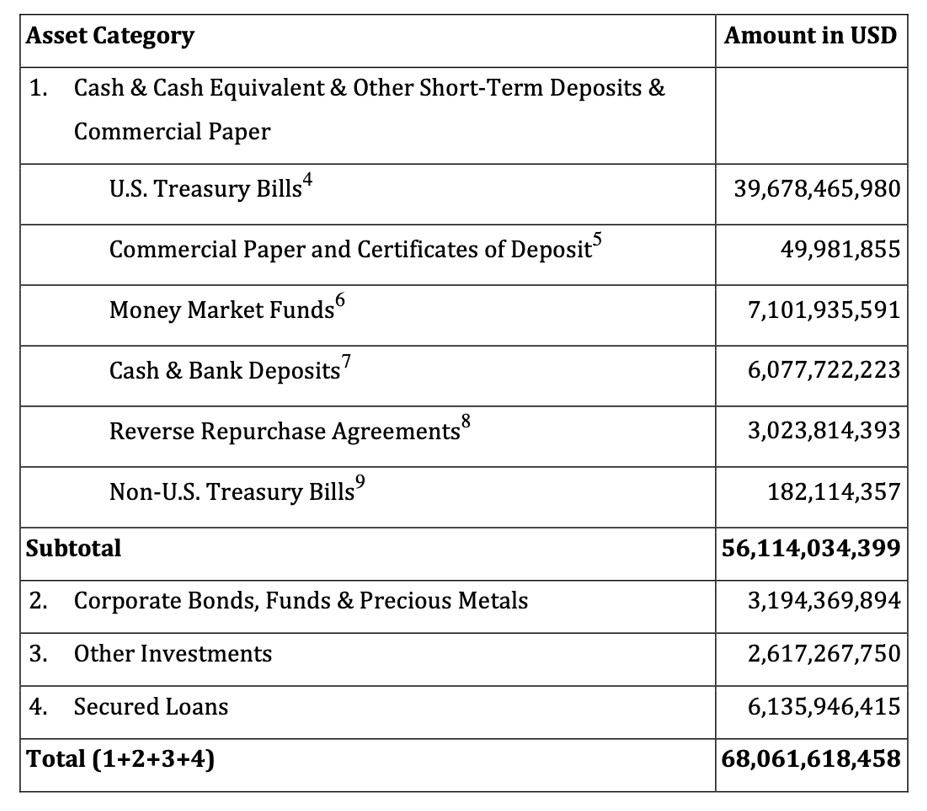 In the first category of “Cash & Cash Equivalent,” we can see that about 82% of Tether’s reserves are in U.S. dollar-denominated safe instruments. With the exception of the $182 million in “non-U.S. Treasury Bills,” the rest in this category appears to be fine.

But what about the other 18% of Tether’s holdings? Is it a 1:1 reserve holding of U.S. dollars to back up the Tether (USDT) issuance? Not even close:

For a company that prides itself on “transparency,” there’s no additional information shared about what those investments look like.

And on page two of the independent auditor’s report produced by Italian firm BDO, there’s a particular bullet point from the auditor listed in “Emphasis of Matter”:

The valuation of assets of the Group have been based on normal trading conditions and does not reflect unexpected and extraordinary market conditions, or the case of key custodians or counterparties experiencing substantial illiquidity, which may result in delayed realizable values. No provision for expected credit losses was identified by management at the reporting date.

As an analyst, and as investors, we should ask ourselves: “Are these normal trading conditions that we’re experiencing right now?”

The answer should be obvious… Absolutely not.

The reality is that about 18% of Tether’s reserves are invested in assets that can experience volatility in price. And since Tether only conducts an independent audit once per quarter, no one has any idea what the value of that 18% of reserves looks like right now. And we won’t until sometime in January.

Tether also doesn’t have any financial provisions for credit losses. In other words, if the value of that 18% of reserves declines, it’s not backed up by anything. The team at Tether is assuming that everything will be just fine irrespective of what’s happening in the markets.

I don’t trust Tether. A lot can happen in three months. And in the event of another large market downturn in the coming months – which I believe we’re in for – the value of the combined $12 billion in non-cash assets could easily drop by several billion.

And when that happens, the Tether stablecoin is no longer backed 1:1.

That is the exact kind of situation that leads to a bank run. The same thing happened with Terra Luna, and we just witnessed the collapse of FTX and Alameda.

Stablecoins are a fantastic financial instrument if well-managed and backed 1:1. They allow investors to move out of digital assets easily and cheaply and into a digital version of a fiat currency as a store of value. This saves the time and expense of the off-ramp to an actual fiat currency.

My recommendation is this: Stick with stablecoins that are backed 1:1 with reserves in cash and short-duration bonds. Tether is a disaster waiting to happen.

My quantum computing prediction was spot on…

In my 2022 Prediction Series last December, I made a big prediction around quantum computing. I said that we would see the world’s first 256 qubit quantum computer this year.

For context, at the time that I made the recommendation, the most powerful quantum computer that demonstrated a quantum advantage was a 128 qubit quantum computer. Some may have said that my prediction was too aggressive and unlikely to occur.

Well, it took until November… but it just happened.

So IBM’s 433 qubit quantum computer is the biggest announcement in the industry this year. Here’s a close-up of it: 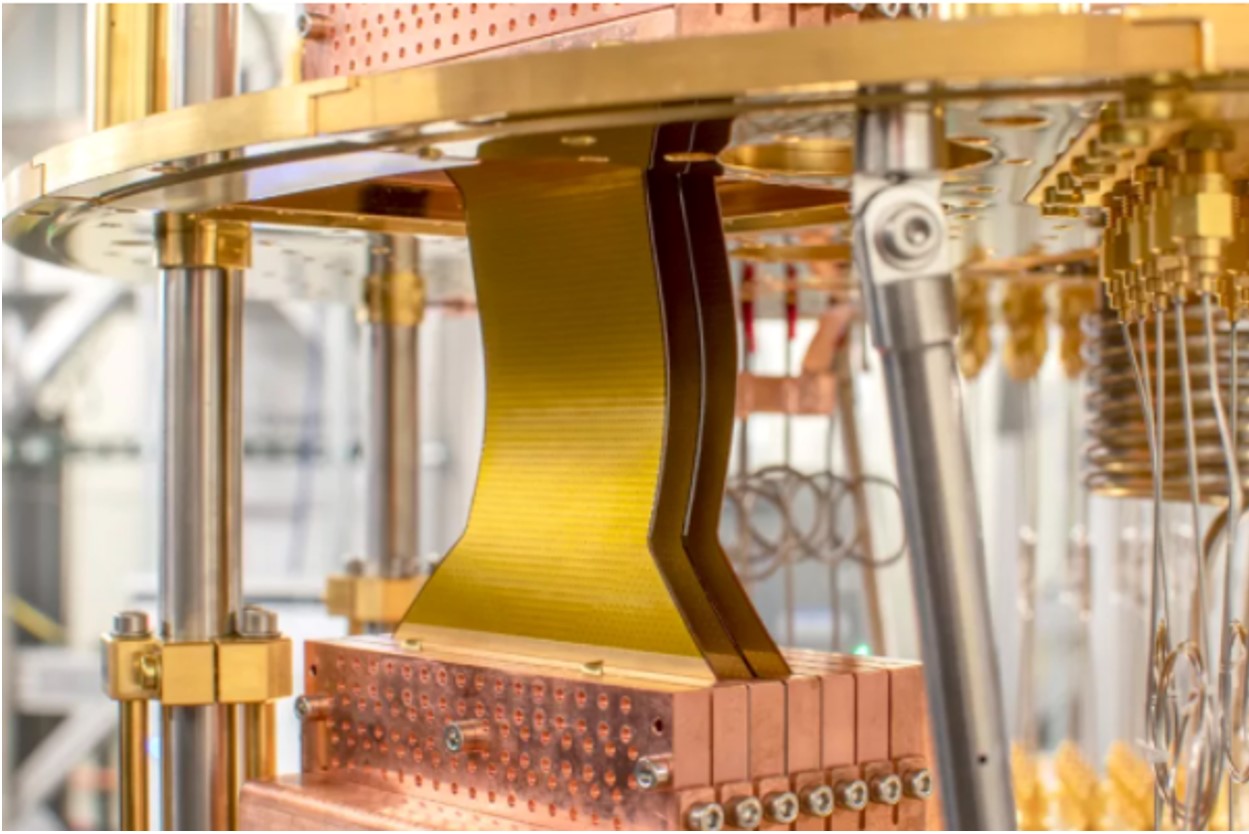 Quantum computers are obviously quite different than classical computers. They’re not simple circuit boards that run on a desktop. And superconducting quantum computers, like the approach IBM’s taken, need to operate in something called a dilution refrigerator.

This is a device that cools the computer down to thousandths of a degree above absolute zero. The conditions are actually colder than space. IBM designed a new dilution refrigerator called Goldeneye to house its 433 qubit quantum computer.

IBM also made some upgrades this time around to improve performance. We can see in the image above that IBM replaced standard coaxial cables with a flexible ribbon system (these are the golden slats). This enables 70% denser connections for the quantum computer.

I have to say, IBM is really keeping to its product roadmap here. This is a big jump up from the company’s previous release: a 128 qubit quantum computer called the Eagle.

Even more exciting, IBM laid out a clear path toward a 1,000-plus qubit quantum computer. It starts with IBM’s plan to launch the “Heron” next year.

The Heron is a 133 qubit quantum processing unit. But unlike what we’ve seen before, the Heron will be interconnectable with other units.

The idea is that we can string as many of these quantum processing units together as we want. This is a modular quantum computing system that can be scaled by just adding additional computing modules. That’s how IBM can quickly build a 1,000-plus qubit system.

Needless to say, a system like that would be capable of extraordinary performance. And it would be perfect for tackling some very complex problems.

When we look at new material science designs, it gets incredibly complex very quickly. That’s why this is a perfect application for quantum computing.

So we’ll be tracking the quantum space very closely as we head into 2023. With a new focus on modular designs, we’re going to see some incredible developments over the next 12 months.

As a reminder, the “Convergence” refers to the application of AI and machine learning (ML) with life sciences and biotechnology.

And Insilico Medicine was one of the first companies to use AI for drug discovery.

Insilico’s AI identified a very promising development candidate in just 46 days. That was back in 2019. This was remarkable considering the drug discovery process historically takes 3.5 years, on average.

So AI-powered drug discovery can produce advanced therapies with a high probability of success. And it can do so quickly and cheaply compared to the way the industry has historically worked.

That’s what this deal is about. Sanofi wants access to Insilico’s tech for its own drug discovery initiatives.

This is shaping up to be a standard structure for these kinds of deals. In fact, these terms look very similar to the $5.2 billion deal Sanofi inked with Exscientia earlier this year.

Sanofi is now pouring billions of dollars into AI-powered biotech research. We can be sure that other biopharma giants will soon follow suit. This will quickly become a matter of competitive advantage.

And all this investment will lead to rapid adoption of AI-based drug discovery. We’ll see a rapid shift to this approach over the next 12 months.

Already, pharma and biotech firms have begun to focus on medical data collection in their areas of therapeutic focus so they can feed an AI the right inputs for analysis.

And that will lead to an explosion of AI-based therapeutic developments. I expect this to be one of the most dynamic trends in high tech/biotech next year.

Normally, I’m not very complimentary of the VC industry. It typically forces one-sided agreements upon early stage companies and founders, and it tends to offer little value beyond the provided capital.

Per the deal, Bassett will provide Andreessen’s early stage biotech portfolio companies access to its healthcare system. This allows Bassett to test and implement its technology in a real-world setting.

This may sound like a simple thing, but it’s absolutely critical.

For early stage biotech and health tech companies, having access to a healthcare system is one of the largest challenges. But they need access in order to test their products in a meaningful way. And then they can innovate and iterate based on the early results.

But the U.S. healthcare system is dominated by just a few massive administrative companies. And they’re incredibly bureaucratic. That makes it difficult for early stage biotech companies to get access.

So if the deal is structured in a way that indeed gives promising early stage tech companies building solutions for the healthcare industry – as well as “quick and easy” access to a healthcare system – then this is a very smart deal.

If this is the case, Andreessen Horowitz is breaking down barriers for its portfolio companies and accelerating their time to market. And that will help them accelerate product development and commercialization. It’s a win-win.