The funds in question were held by South African cryptocurrency investment firm Africrypt. And what went missing was actually 69,000 bitcoins.

The two brothers who founded Africrypt also went missing for reasons that aren’t yet apparent. But we can certainly speculate…

In mid-April, the two brothers informed investors that the platform was shutting down. They claimed there was a hack that compromised all client accounts and cryptocurrency wallets.

In the email communication, investors on the platform were asked not to report the hack to law enforcement on the grounds that doing so would slow the recovery process.

Naturally, several investors did contact law enforcement, and that’s when the two brothers disappeared. They still haven’t been located.

Some investors claim that they ran off with the funds. The brothers, through their lawyer, have communicated that they did not run off with the money, and that the losses were the result of a hack of their investment platform.

And on Monday, the brothers claimed that only $5 million was missing, while at the same time reporting that some of their clients are “very dangerous people.” This suggests that they’re in fear for their lives.

Yet a law firm representing some of Africrypt’s investors has reported that the missing funds have already been run through tumblers and mixers in an effort to obfuscate where the 69,000 bitcoins have been sent.

An interesting twist is that, since cryptocurrency is not currently regulated in South Africa, this matter isn’t within the South African regulator’s purview. It’s also interesting that just yesterday, the lawyers representing the brothers were terminated from the case.

What makes this whole drama even more incredible is that the two brothers who founded this cryptocurrency investment platform are just 18 and 20 years old. And it gets better…

This is the second time that this has happened. Back in May of 2019, the brothers owned another investment platform that they claimed had been hacked and emptied of all bitcoin. The brothers blamed the hack on their trading partner Binance at the time.

At this stage, who knows what happened? Did they run off with the funds? Or was it just sloppy security that made them a great target for hackers?

Either way, they’re responsible. And in this day and age, it’s nearly impossible to stay hidden for very long.

And contrary to what many think, bitcoin transactions are traceable. Mixing things up can make it difficult and time consuming for investigators. However, it’s impossible to move $3.6 billion off of a digital exchange into fiat currency without being noticed.

And forgive me for stating the obvious, but entrusting billions of dollars to an 18- and 20-year-old with almost zero experience is a recipe for things to go very pear-shaped. It couldn’t possibly end well.

Yet another commercial space tourism company called Space Perspective has “launched.” This is an Orlando-based company that was just founded at the end of last year. And it’s bringing a completely new approach to the space tourism industry.

Space Perspective has created a circular luxury spacecraft. It can seat eight passengers and a pilot.

But instead of being launched on a rocket or dropped from an aircraft at a high altitude, this luxury spacecraft is lifted by a giant balloon. And I mean giant. The balloon is the size of a football field.

The beauty of this approach is that it saves passengers the discomfort of going through a high-powered rocket launch and experiencing some serious g-forces. And it provides a much more leisurely experience.

The balloon rises at just 12 miles per hour. Meanwhile, the spacecraft features a 360-degree view of the Earth. And get this – the spacecraft also sports a bar and a restroom. Passengers can hang out with drinks-in-hand and enjoy the amazing views.

Space Perspective envisions taking passengers up to the very edge of the Earth’s atmosphere. That’s about 20 miles up, but still well below the Kármán line – the boundary between the atmosphere and outer space. The only downside is that passengers really won’t be able to call themselves astronauts…

But the ride will provide an incredible experience without requiring passengers to undergo any special training. Have a look: 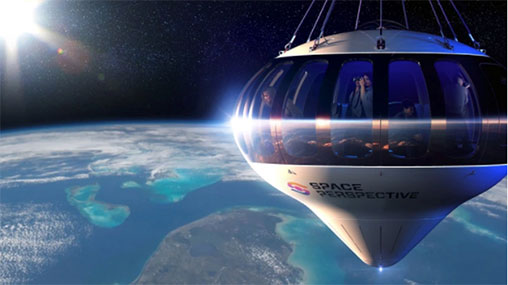 How’s this for a differentiated approach to space tourism?

What’s more, seats will only cost $125,000. While still expensive, that’s about half the price of what Blue Origin and Virgin Galactic are expected to charge for their trips to zero gravity.

And Space Perspective does have a safety mechanism in place. If something were to happen to the balloon, the craft will deploy a massive parachute after going into freefall. That will slow its descent and allow it to drift safely down into the ocean. That would certainly make for a more interesting ride!

I’m excited to see Space Perspective bringing a new luxury approach to the burgeoning space tourism industry. This is an exciting new entrant, and all the technology is widely available.

I don’t think the company will have any problems getting up and running, presuming it can raise the capital to build its spacecraft and operational support.

And I suspect that there is a market for something like this, which is perceived to be much less risky than strapping yourself to the top of a rocket booster.

As it stands, Space Perspective is currently accepting reservations for its first flights. There isn’t any indication how soon the company will be providing flight services, but I’ll certainly be keeping an eye on it.

And I must say I am very tempted myself.

Perhaps we will replace the Brownstone Research Christmas party this year with a Space Perspective flight. I may see if they will allow us to book the entire craft at a per-seat discount. That would certainly make for a good issue of The Bleeding Edge.

We’ve talked about the convergence trend in these pages before. This refers to the integration of artificial intelligence (AI) and biotechnology for the purposes of drug discovery and development.

It will lead to an abundance of new treatments for the diseases that plague humanity in a fraction of the time compared to the way that we have historically developed drugs.

A key inflection point came when a company called Exscientia used AI to design a new drug therapy that advanced into Food and Drug Administration (FDA) clinical trials. That was the proof of concept.

And now private capital is pouring into the companies that are powering this trend forward.

To that end, convergence company Insilico just raised an impressive $255 million in its Series C venture capital (VC) round. This raise almost certainly pushed Insilico’s valuation above the $1 billion mark, making it a unicorn.

We have talked about Insilico before. Based out of Hong Kong, Insilico uses AI to find drug targets for untreated diseases.

And once the target is identified, Insilico’s AI can develop the therapy in record time. In fact, its first therapy entered preclinical trials a full two years ahead of the traditional timeline. That therapy seeks to treat idiopathic pulmonary fibrosis, which is a serious lung disease that causes scar tissue to grow inside the lungs.

Now Insilico claims to have 16 new therapies in the works. How’s that for rapid pipeline growth? And CEO Alec Zhavoronkov is very excited about each of them.

Several key VC firms caught my eye when I was combing through the list of Insilico’s Series C investors. OrbiMed, Deerfield Management, and Sequoia Capital – this is some very smart money investing in promising biotech companies.

We’re going to keep a close eye on Insilico. I wouldn’t be surprised at all to see an IPO within the next 18 months. And we’ll absolutely follow the convergence story closely as well. This is one of our biggest themes here at Brownstone Research.

Thanks to this intersection of AI and biotechnology, we are no more than a decade away from being able to cure many diseases that were previously thought to be untreatable. That’s incredible news for the planet that will have a material impact on human longevity.

And it will present us with some incredible investment opportunities along the way. To learn about my top public convergence recommendation, just go right here for the story.

Starlink’s satellite internet service is gearing up for launch…

We’ll wrap up today with an update on SpaceX’s Starlink division.

As a reminder, Starlink launched the beta version of its satellite internet service back in November. And it allowed consumers to place preorders for the service once it becomes available in their area.

When we checked in on the program last month, Starlink already had about half a million preorders on the books. That’s pretty impressive.

And Starlink would like to add more users from its preorder list, but the company is dealing with supply chain shortages that have delayed the production of the user terminals. That’s the “dish” that receives and transmits data between the Starlink satellites.

Despite the delays, Shotwell said that Starlink will have global satellite internet coverage by September. That’s within three months.

And with worldwide coverage soon to be in place, Starlink is working on getting regulatory approval to launch in many countries around the world.

So the company is making great progress. And we can expect Starlink to move its satellite internet service out of beta mode and into a global launch for consumers in the very near future. That could happen before the year is out, depending on the supply chain issues.

This is something we need to keep a close eye on.

Once Starlink’s internet service is out of beta and commercially launched with at least half a million subscribers, I expect SpaceX to spin the division out into its own company.

Then Starlink can pursue an initial public offering (IPO). That will allow the company to raise more capital to build out its satellite constellation even further.

Starlink’s satellite internet service will cost $99 per month. If all 500,000 preorders convert to subscribers, Starlink will be raking in nearly $50 million every single month right from the start. That’s not too shabby.

From there, SpaceX CEO Elon Musk’s prediction of $30 billion in annual revenues by 2025 comes into play. That would take about 25 million subscribers. If Starlink can get to that point, it would be generating more revenue than SpaceX.

So this is a company that could potentially be a great investment target at the right valuation. I wouldn’t be surprised to see the IPO hit the books sometime next year.

P.S. For those who missed it, there’s just a little time left to catch the replay of our Silicon Valley “Unlocked” event from last week. And several of the companies on my “list” of top Penny IPOs are still an amazing buying opportunity today.

For full access to the replay, just go right here.