On the very rare occasions when he steps into high-tech, I have to wonder. He’s famous for eschewing technology companies over the last five decades, a point which he now humbly regrets.

But at 92 years old, it’s not too late, which is why I was so excited to see Buffett ape in and announce that his holding company Berkshire Hathaway had purchased a $4.1 billion stake in the world’s largest semiconductor manufacturer – Taiwan Semiconductor Manufacturing (TSM).

Despite the geopolitical concerns that we reviewed on Monday in The Bleeding Edge, Buffett felt comfortable building an outsized position in TSM. I don’t blame him.

TSM has an enviable position on the world stage that took decades to build. Its moat is incredible, and no other semiconductor manufacturer can keep up with TSM’s relentless pace of manufacturing the world’s most advanced semiconductors.

Apple, AMD, NVIDIA, Qualcomm, and countless others rely on TSM to manufacture their products. On the bleeding edge of manufacturing, there’s literally no one else to turn to. One could even make an argument that TSM is one of the most important companies in the world – one that must be protected at all costs.

It’s not hard to see why Buffett likes it.

TSM is trading at a modest 7.7 times EBITDA and about 5.3 times this year’s sales. This is a very reasonable valuation for such a dominant, high-quality growth company that’s gushing free cash flow. Some would say it’s too cheap.

Which raises a question: Is Buffett calling a bottom in semiconductors?

He’s close, but almost certainly several months early. Aside from the economic headwinds and repressive monetary policy, there’s still room for parts of the market to fall.

No matter how much I like NVIDIA, that’s expensive – even in strong market conditions. And even though NVIDIA has already fallen 52% in the last 12 months, it could easily fall another 30% to 40% in the next six months.

That would be the time to step into NVIDIA.

Buffett is known for his patience. He’s always used time to his advantage. And he bought the semiconductor company that currently has the largest moat in the industry. The same one that the NVIDIAs of this world can’t live without.

He’s not worried about timing the market, or what will happen in the next six months. Within two or three years, he will have made billions of dollars on TSM, and it may turn out to be the best tech investment he’s ever made.

Amazon: one of the world’s largest robotics companies…

Amazon just put out yet another major robotics announcement a few days ago. This one came at an event held by Amazon’s Robotics Innovation Hub just outside of Boston.

There, Amazon revealed “Sparrow.” It’s a new artificial intelligence (AI)-powered robot that will assist humans in Amazon’s warehouses. Here it is: 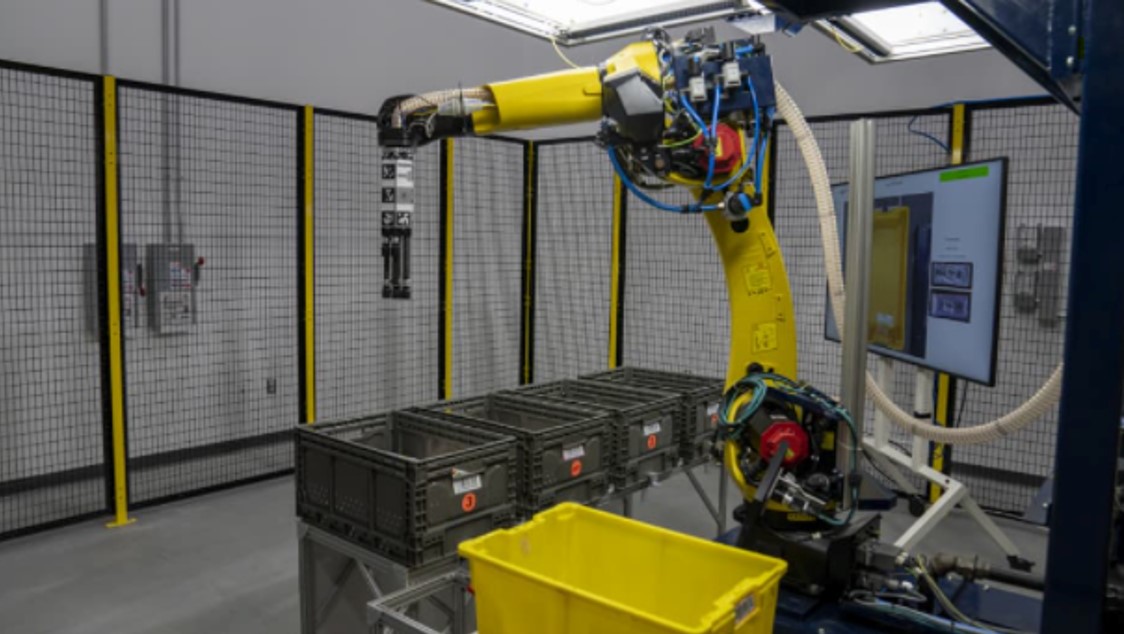 Sparrow is a great complement to the other robots Amazon has deployed in its facilities.

We’ve seen the robots that can move pallets and large crates of products so humans don’t have to. Well, Sparrow has the ability to identify and pick up individual objects.

And what stands out about Sparrow is that, by using computer vision technology, it’s able to recognize about 65% of Amazon’s entire inventory. This amounts to the ability to recognize millions of individual items. Sparrow can sort, pick up, and move these items as necessary.

Again, this functionality is a great supplement to the work humans do in the warehouse.

Picking and sorting is a repetitive task. It’s boring. And it can sometimes be hard on the body. This is work that very few humans actually want to do. That’s why Amazon has struggled to hire enough warehouse workers in recent years.

What’s more, Amazon’s projections show that its shortage of warehouse workers will only get worse over the next 24 months. In other words, it has to innovate with robotics to keep its own business running.

I know this might seem to contradict Amazon’s recent announcement that it will reduce its workforce by about 10,000 employees – and bolsters the argument that robots are taking those jobs – but that’s not the case here.

Like most tech companies over the last two years, Amazon over-hired assuming that good economic conditions would continue. As we now know, that’s not the case.

In the short term, Amazon, like so many others, needs to scale down its business to the reality of the recession that we’re in right now. And Sparrow hasn’t been deployed across Amazon’s business yet. It’s designed to meet the labor shortage that’s coming – not the issues that Amazon is faced with today.

In time, a better-paid human workforce will be employed to install, maintain, and program Amazon’s robotic infrastructure rather than perform the manual labor required today.

Most of us think about Amazon as the world’s most successful e-commerce company, or the largest web services company.

But over the last decade – since its smart acquisition of Kiva Systems back in 2012 – Amazon has become one of the most successful and important robotics companies in the world. And because its robotics products are in-house, it’s become a massive competitive advantage for Amazon’s e-commerce business.

Japan doesn’t want to be left behind in semiconductors…

An interesting semiconductor development just came out of Japan. I haven’t seen anything like this in the industry in at least two decades.

Japan just announced that it’s creating a brand-new semiconductor manufacturing company. Its goal is to develop bleeding-edge chips that are on par with those produced by TSMC. Definitely an ambitious goal.

The new company will be called Rapidus (ラピダス). And what’s unique is that it will be backed by eight Japanese conglomerates, including Toyota, Denso, Sony, NTT, NEC, SoftBank, Kioxia, and Mitsubishi UFJ Bank.

Toyota and Denso hail from the auto industry. Toyota is an iconic carmaker. And Denso is a Tier 1 supplier to the automotive industry – and one of the largest in the world.

Sony is most famous for its consumer electronics brand. NTT is Japan’s largest wireline and wireless company. NEC makes computer platforms and display panels. SoftBank is a wireless communications and financial services conglomerate. Kioxia is a memory and hard drive company. And of course, Mitsubishi UFJ Bank is a bank.

Notice how none of these are semiconductor manufacturing companies. Instead, several of them are Japan’s largest buyers of semis.

That’s what is so interesting about this.

Japan is aggressively looking to strengthen its own semiconductor supply chain. I have no doubt that this is because tensions between Taiwan and China are heating up. That has the potential to disrupt TSMC’s business to some degree. And Japan sees China very much as an adversary and is deeply concerned about its power and influence in Asia.

And we should note that Rapidus is going big. It plans to start production at the 2 nanometer (nm) node in 2027.

For context, 5nm is bleeding edge today. TSMC plans to put 3nm chips into production in the second half of next year. And then it will look to get started on 2nm chips later in 2024.

So Rapidus plans to go to market with semiconductors that are two generations more advanced than what exists today. It intends to manufacture semiconductors that have historically been limited to production in Taiwan, and to a lesser extent South Korea. It also announced plans to scale to even smaller dimensions after 2nm as well.

Clearly, Japan is initiating its own “Great Recalibration” of sorts.

And because Japan is an ally to the U.S., it won’t have any restrictions purchasing the extreme ultraviolet (EUV) semiconductor manufacturing equipment from ASML, the same equipment that China is banned from procuring.

The reshoring of critical manufacturing capabilities has become a global phenomenon. And those companies that supply the technology for advanced and automated manufacturing are going to be the primary beneficiaries of this decade long trend.

We’ll wrap up today with another exciting announcement from the world of CRISPR genetic editing.

For the sake of newer readers, CRISPR is like software programming for DNA. It allows us to “edit” genes just like we use “cut” and “paste” features in software.

And I’m very excited about new research that was just published in scientific journal Nature. It details an experimental study around 16 patients with different forms of cancer.

In the study, researchers extracted each patient’s own T cells and modified them using CRISPR. The modification was designed to help the T cells better identify cancerous cells.

T cells are critical to our body’s immune system. They’re what identify and attack foreign pathogens.

And they’re very good at identifying things with foreign genetic makeup. Viruses are a great example.

The problem with cancer is that it’s a mutation of our own cells. So cancerous tissue isn’t made of foreign genetic material. That can make it hard for our T cells to recognize and attack it.

And to take this a step further, cancerous cells aren’t homogenous. Because all humans have different genetic makeup, all cancerous cells do too. That’s why it’s so hard to develop one-size-fits-all cancer therapies.

That’s what makes this study so exciting. The researchers used CRISPR to create a personalized therapy for each individual patient. This is the whole point of precision medicine.

The results weren’t perfect. But they were encouraging considering that all of the patients hadn’t responded well to any other forms of cancer therapy. Said another way, their outlook before the study wasn’t good at all, as these are very sick patients.

This approach worked to stabilize the cancer in five of the 16 patients. That’s a 31% effectiveness rate…for a population that is sadly on their last leg of life.

Positive results on a first effort like this with this kind of patient population are pretty amazing. And there is an early stage biotech company that collaborated with researchers on the study – PACT Pharma.

PACT is already backed by pharma giant AbbVie Ventures and Google Ventures. After this latest study, I wouldn’t at all be surprised to see a major funding round.